Meena's Cabin in "Bonanza": Is this the last set built at Iverson in the filming era? 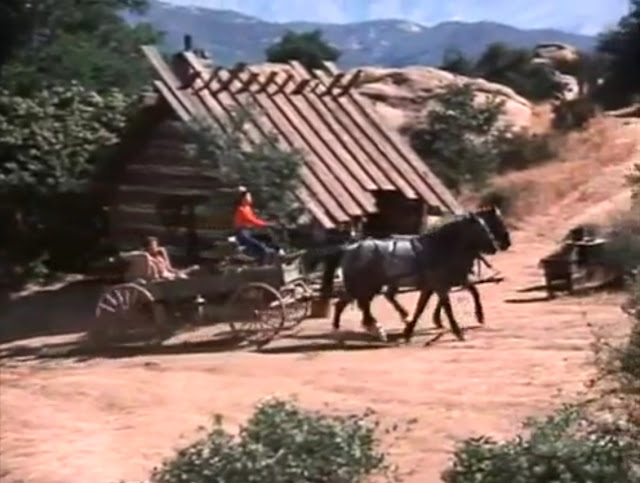 Here's a cabin that turned up in a "Bonanza" episode called "Meena," which premiered Nov. 9, 1969. The small wooden building, with its unusual roofline, would have been one of the last sets, possibly the very last set, built at the Iverson Movie Ranch while it was still a working filming location. 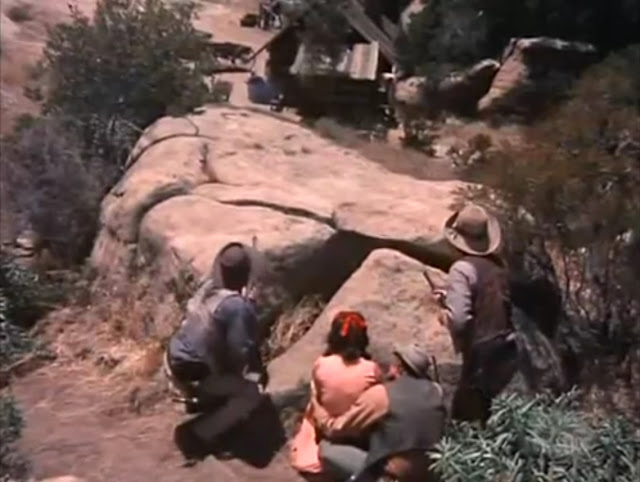 The surrounding rocks pinpoint the exact location where Meena's Cabin stood, which is on a piece of property that now contains an upscale estate at the end of a cul de sac on the former Upper Iverson. The above shot, taken from the rocks up above and to the east of the cabin — from an area near a familiar movie rock known as Eagle Beak Rock — shows the cabin from the opposite side of the first shot, revealing that it was in fact a full four-sided cabin and not just a "front." 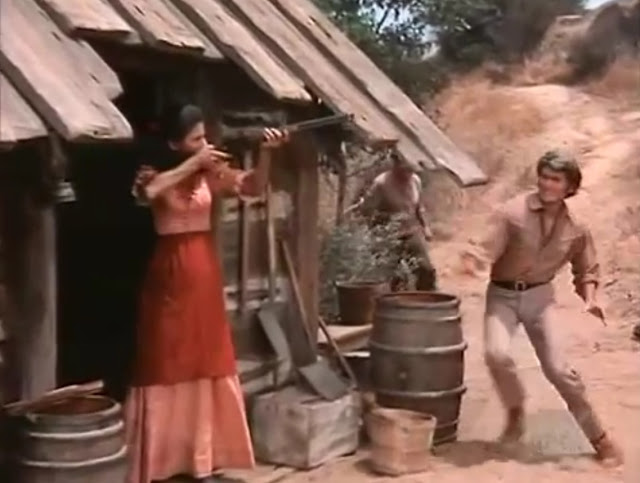 That's the title character, Meena — played by Ann Prentiss — out in front of the cabin with a rifle, and Little Joe, played by Michael Landon, hurrying to try to keep her from killing somebody. (She happened to be taking aim at Candy, a good friend of the Cartwrights.) 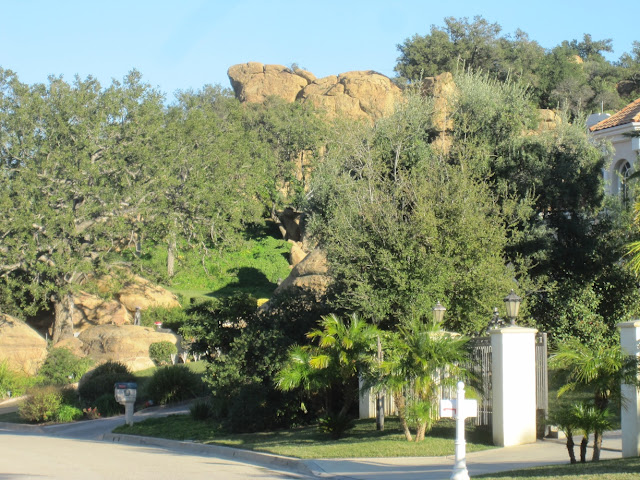 Here's a look at Eagle Beak Rock today, at the top of the frame. You may recognize it from its hundreds of appearances in the backgrounds of chase scenes in B-Westerns, early TV shows and other productions, especially from the 1930s through the 1950s. The location of Meena's Cabin was approximately on that patch of grass near the center of the photo. The house partially visible at the far right is part of the property where the cabin stood, while the fence in the lower right corner belongs to a neighboring property. 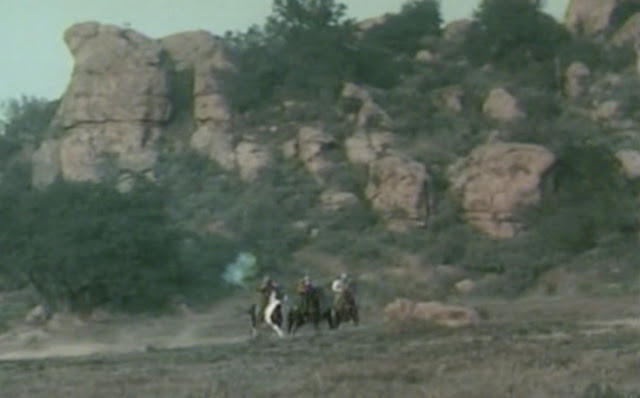 Eagle Beak Rock turns up over and over again. Here it is at top left in the 1950 Columbia Western "Calamity Jane and the Texan," starring Evelyn Ankers and Jimmy Ellison. 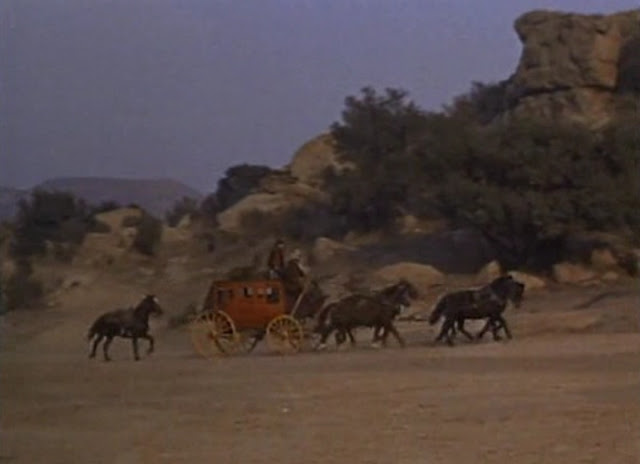 Another appearance by Eagle Beak Rock, this time in an early "Bonanza" episode — "Desert Justice," which aired during the first season, premiering Feb. 20, 1960. 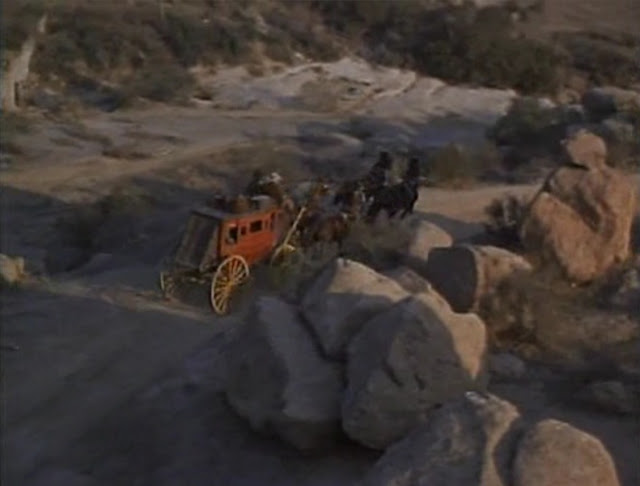 This is a cool shot from that same early Bonanza episode, "Desert Justice." In this view of the South Rim on the Upper Iverson, part of the concrete bridge is visible in the top left corner, and the white area at the top center of the photo is the creekbed for Fern Ann Creek (sometimes called Iverson Creek), which looks as though it was pretty dry at the time. The creek continues to flow these days, although it is usually little more than a trickle. The prominent rock feature at the far right of the photo, directly to the right of the horses, is sometimes called Gold Raiders Rock. It includes a smaller rock that was cemented on top of a larger rock, and this feature remains in place today.

"Bonanza" shot about 40 of its 430 episodes at Iverson during an impressive 14-season run on NBC (1959-1973). In my experience, when the series did shoot at Iverson it made great use of the place. It was one of the most successful of all television Westerns, and one of the most high-profile shows to shoot at Iverson. So if Meena's Cabin was in fact the last set built for filming at Iverson, it provided a fitting final chapter to the movie ranch's filming era.

Pear Rock, a fake mine ... and two Grove Cabins 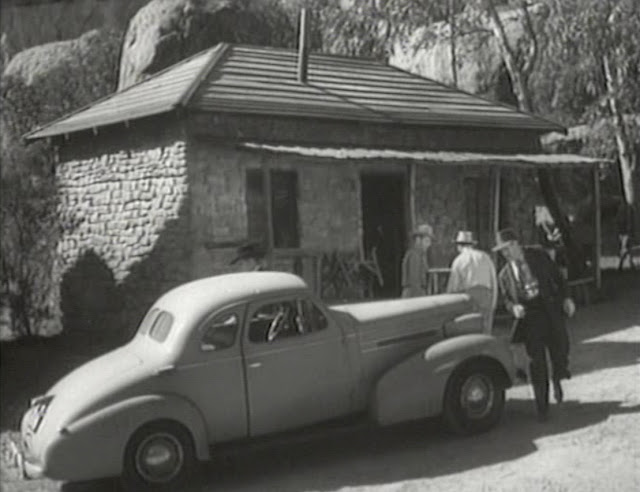 One of the so-called "permanent" buildings on the old Iverson Movie Ranch was a small cabin located in the Eucalyptus Grove, known as the Grove Cabin. 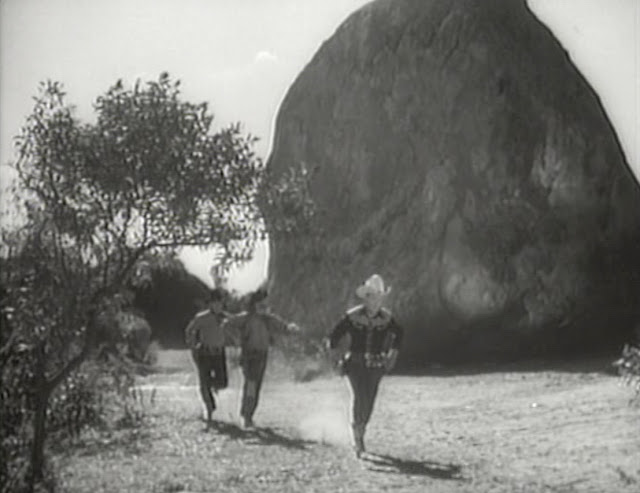 Pear Rock, next to Grove Cabin ("Bells of Rosarita")

The Grove Cabin was located immediately west of Pear Rock, seen here in the same "Bells of Rosarita" sequence as Roy and the boys sneak up on the cabin. 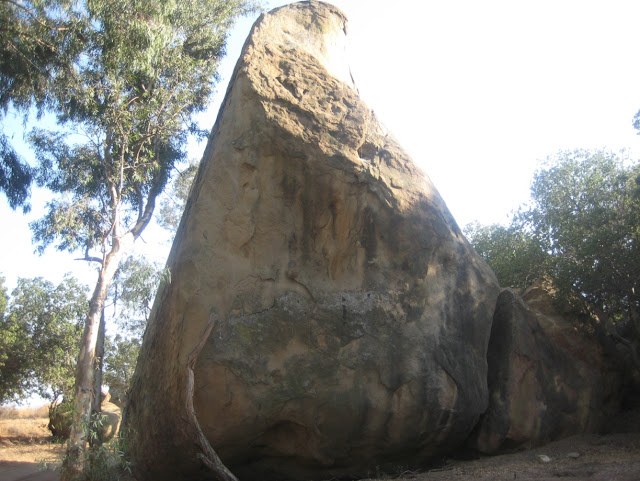 Pear Rock as it appears today

Pear Rock is still around. The angle isn't exactly the same, but you may be able to spot some of the same markings on the rock in the above two photos. 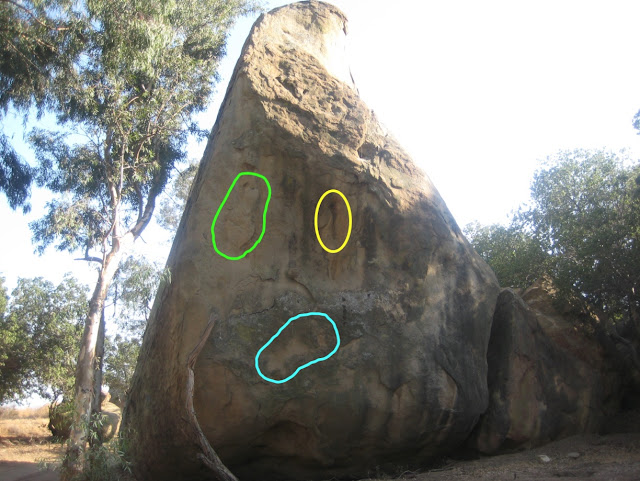 Here are a few of the puzzle pieces to help you get oriented. 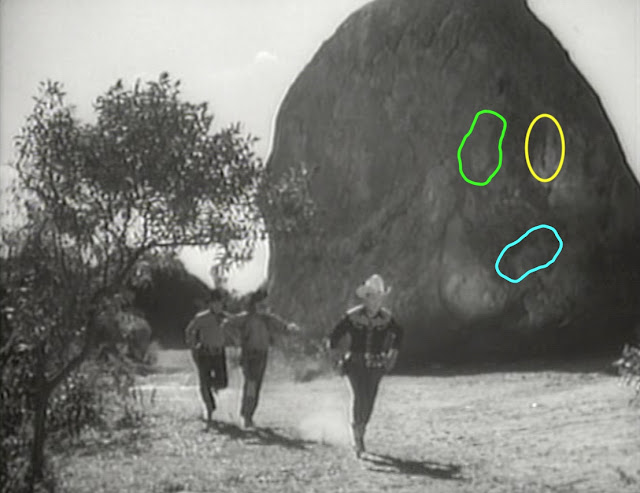 And those same puzzle pieces noted in the "Bells of Rosarita" screen shot. 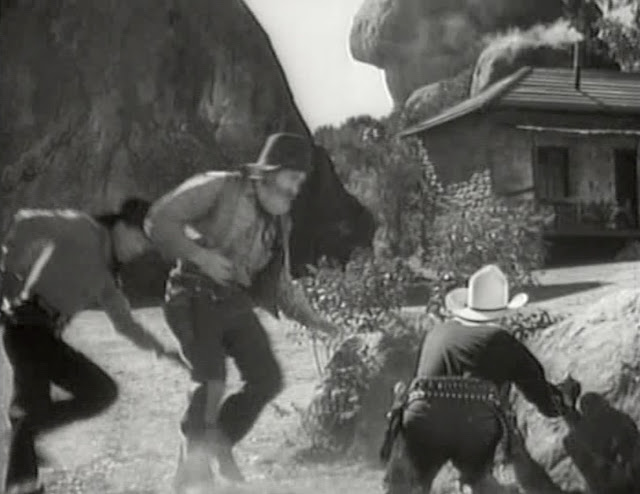 This shot from the "Bells of Rosarita" sequence shows Pear Rock on the left and Grove Cabin on the right, with a blurry Gabby Hayes in the middle. Note the muffin-shaped rock above the cabin. 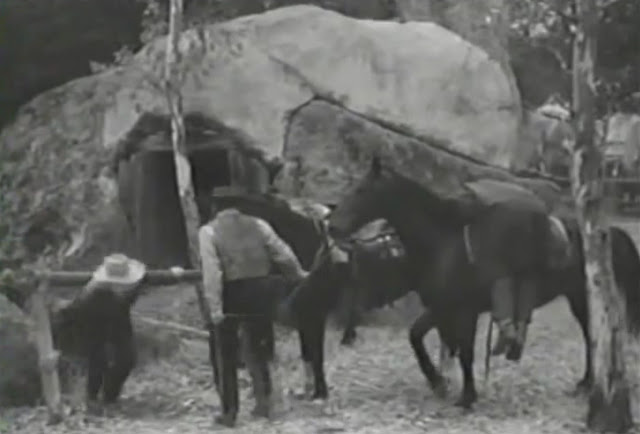 For a period of time the Grove Cabin had this odd-looking fake mine next to it. This mine was unusual because the light-colored fake rock material was combined with an actual rock — the darker angular part to the right of the mine entrance — giving the construction a two-tone effect. 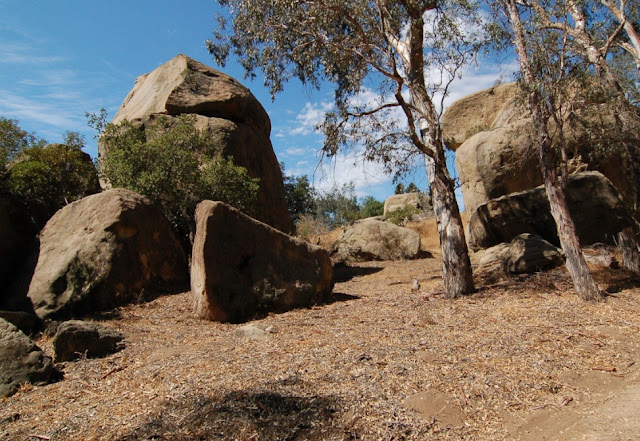 The fake mine area as it appears today

The angular rock that was a part of the mine construction is still in place — here's what it looks like today (near the center of the photo). Also visible in this photo is the tall muffin-shaped boulder that looms above Grove Cabin in the movie shots. 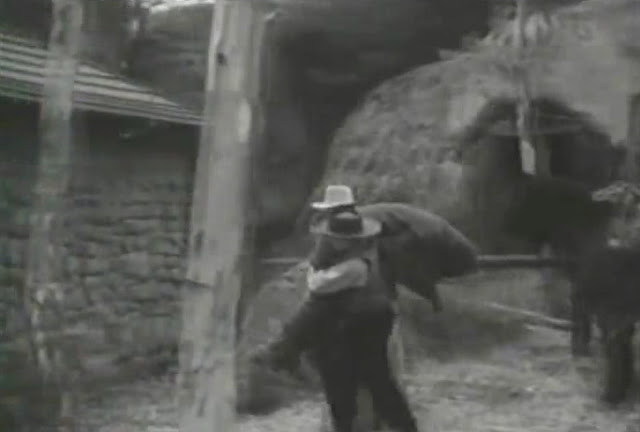 "Law of the Canyon"

This blurry shot from "Law of the Canyon" shows the proximity of the fake mine, on the right, to Grove Cabin, on the left. 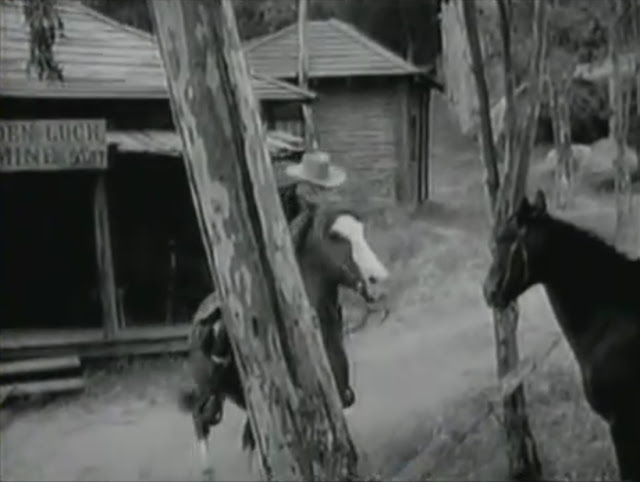 Grove Cabin stood from about 1939-1958, a long time by movie set standards. Near the end of that run a second cabin was added to the set, immediately west of the original cabin. 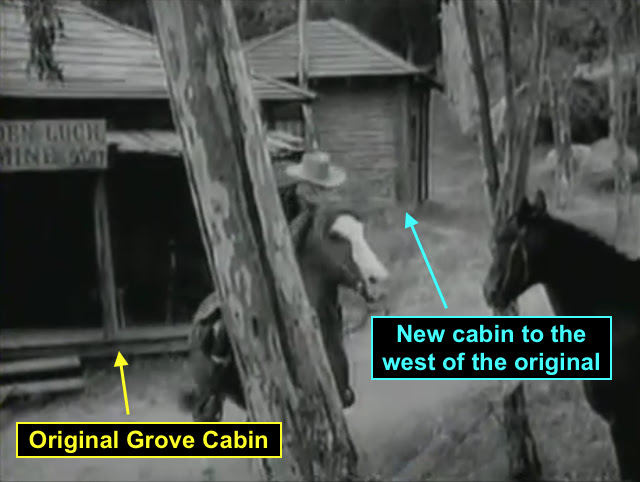 The smaller second cabin stood more or less where the fake mine previously stood. (TV trivia time: "Circus Boy" starred a young Micky Dolenz, who would go on to greater fame a decade later as a member of the '60s pop band the Monkees.) 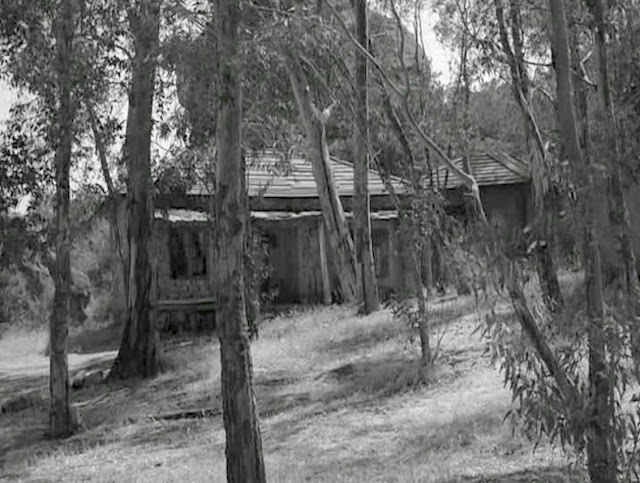 This shot from the TV series "Gunsmoke" again captures the two Grove Cabins, along with some of the Grove's trademark eucalyptus trees. 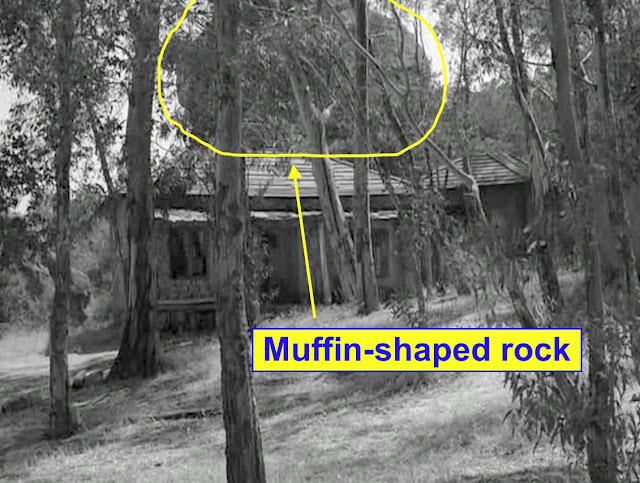 The tall muffin-shaped boulder continues to loom in the background, directly above the main cabin. 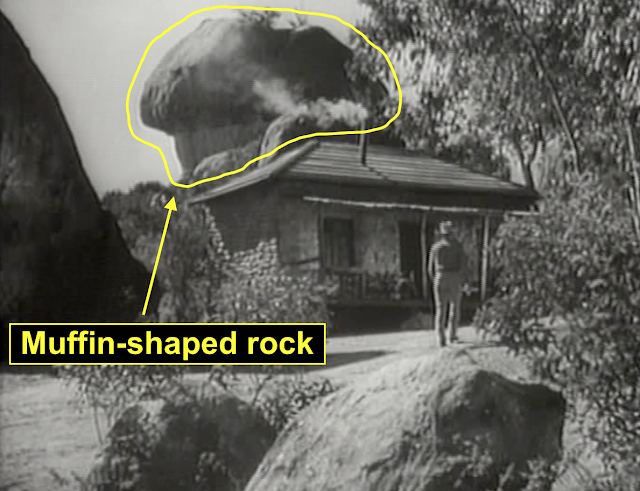 "Bells of Rosarita": Muffin-shaped rock behind the cabin

Another shot from "Bells of Rosarita" highlights the rock's muffin shape. 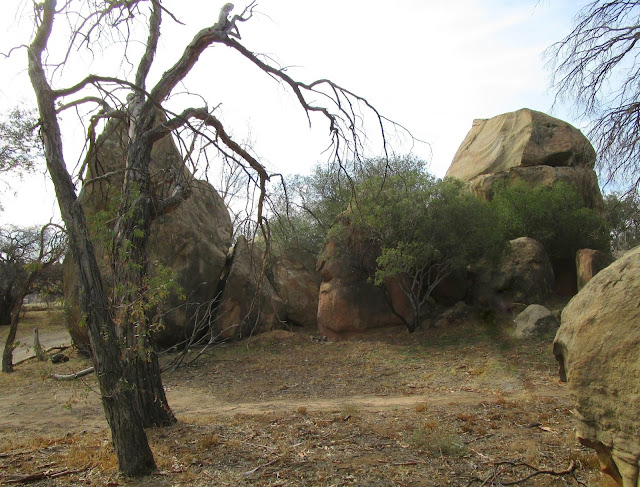 A recent photo of the area where the Grove Cabin once stood shows Pear Rock on the left and the muffin-shaped rock on the right. 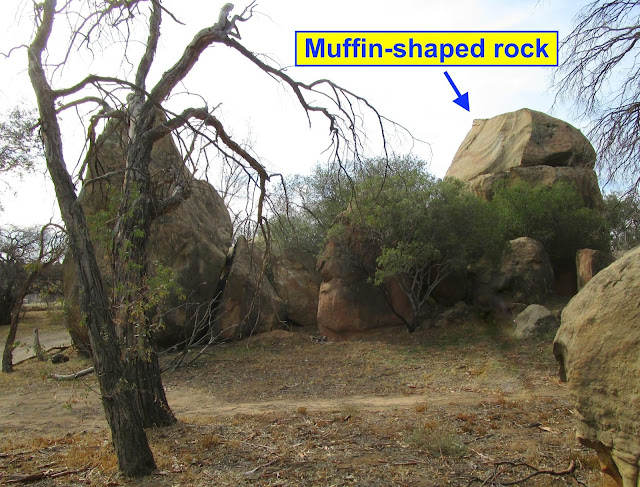 A close look at the muffin-shaped rock as it appears today reveals that it's no longer as "muffin-shaped" as it once was. 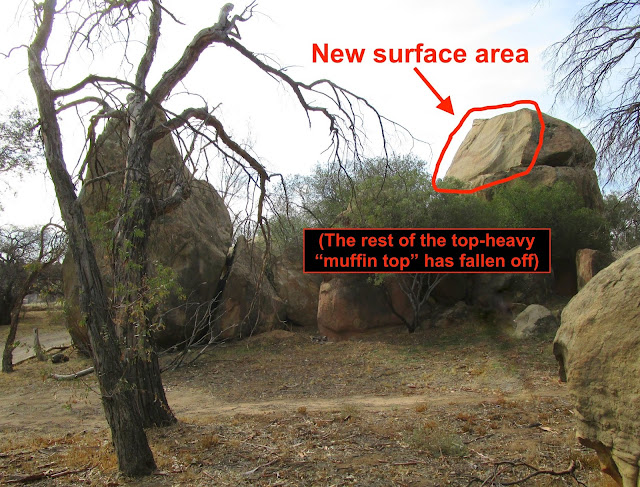 A large chunk of the once top-heavy rock has fallen off in the years since the area was used for filming, leaving behind a flat, lighter-colored area of unweathered surface along the eastern face of the rock.
Posted by Swami Nano at 9:48 AM 1 comment: