"The Tomb": A rare shoot at the Iverson Movie Ranch in the 1980s 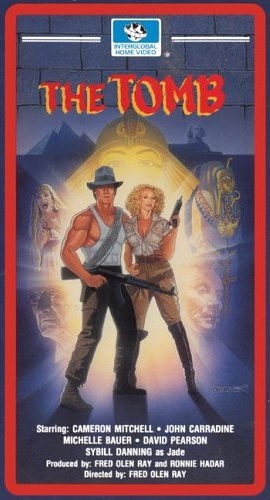 An unusual entry in Iverson Movie Ranch lore is the 1986 movie "The Tomb," directed by Fred Olen Ray with a cast that includes Cameron Mitchell, John Carradine and Sybil Danning. The plot involves the theft of artifacts from an unmarked Egyptian grave — which turns out to be located on the Upper Iverson — and the revenge sought by the ancient Egyptian woman whose tomb it was. It's apparently based on a Bram Stoker novel, "The Jewel of Seven Stars." 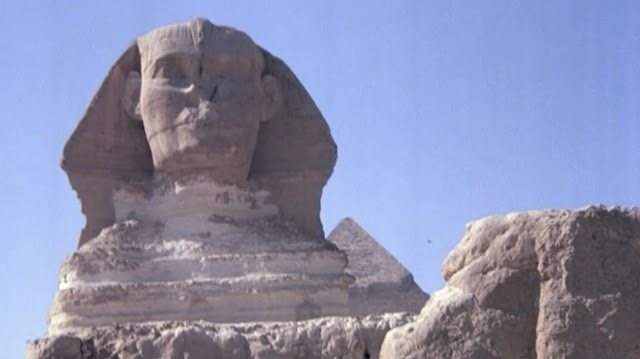 A few well-chosen landmarks such as the Sphinx and the Pyramids — presumably stock footage — place the action in Egypt, before it shifts to the Upper Iverson. (Note that the Iverson Movie Ranch does have its own Sphinx, also known as Eagle Beak, which can be seen here.) What's interesting to me about "The Tomb" is that 1986 was almost two decades after Iverson stopped being a working movie ranch, and only a few productions were filmed there around this time. The movie includes just one short sequence at Iverson, but it's important footage — and it includes the appealing sight of cast members tromping around the South Rim of the Upper Iverson with a couple of camels. 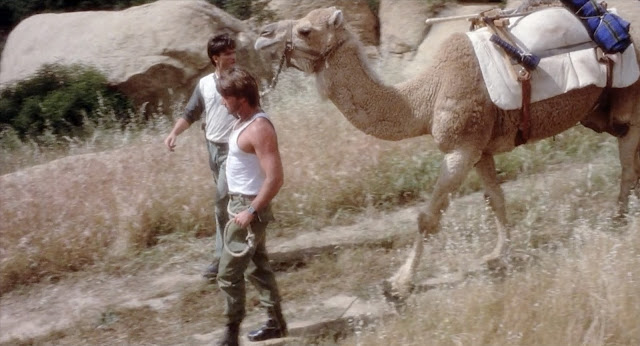 The above shot features a rock I call Tamale, in the top left corner. It was widely seen in the B-Westerns and serials of the 1930s through the 1950s, and I believe it still exists today although I've never seen it. The area where it was located (and should still be located) is a spot I would love to get a look at but it's part of a private estate and remains essentially unexplored by movie historians. "The Tomb" may be the last movie to be filmed in this area before it was developed. 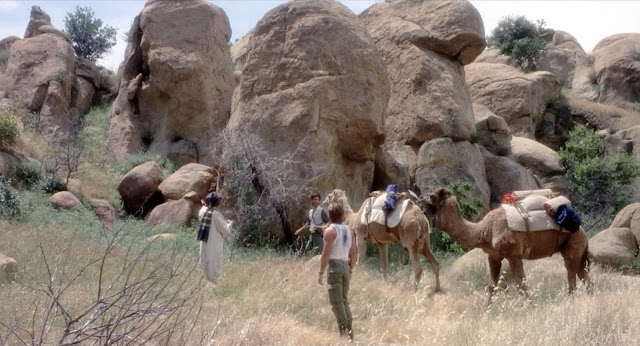 On their journey to find the hidden tomb, the adventurers pass some other familiar Iverson sights, including these iconic stone towers that have been called the Totem Rocks, Totem Pole Rocks, Easter Island Committee or simply Easter Island. The distinctive overhanging tower — Notch Rock — seen just right of center (directly above the head of the camel on the right) has at times served as the clincher that a production is shot at Iverson. More about Easter Island and the Notch, or Notch Rock, can be found here. 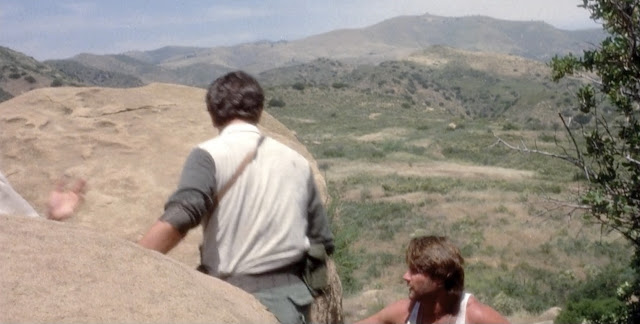 This shot from "The Tomb" is probably one of the last overviews of a portion of the Upper Iverson to appear in the movies. The shot looks north toward Oat Mountain (in the distant background, toward the right), with some of the rocks of the South Rim in the foreground. The photo below shows what this area looks like today.

Here's a view of approximately the same portion of the Upper Iverson in more recent times, from a 2009 visit, showing a number of the estates that have been built on the former movie ranch property. Construction has slowed considerably in recent years, but still continues. In many cases the landmark rocks seen in the movies and TV shows have been removed to make way for houses, and in other cases they remain preserved, in a way, as part of the landscape — often in driveways and back yards. Still others survive in hiking areas around the fringes of the developed land. 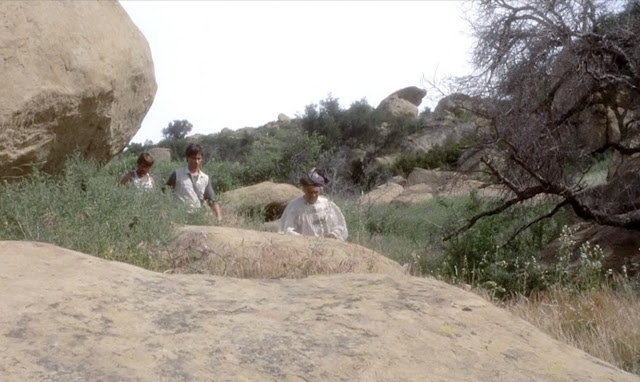 As the two American adventurers and their Egyptian guide close in on the hidden tomb, they hike below an instantly recognizable rock I call Moschops, which I've talked about in a previous post. In the shot above, Moschops is the pointed rock in the background, above and to the right of the guide. Moschops is still in place on the South Rim, and this shot turned out to be helpful in my own search for the tomb. 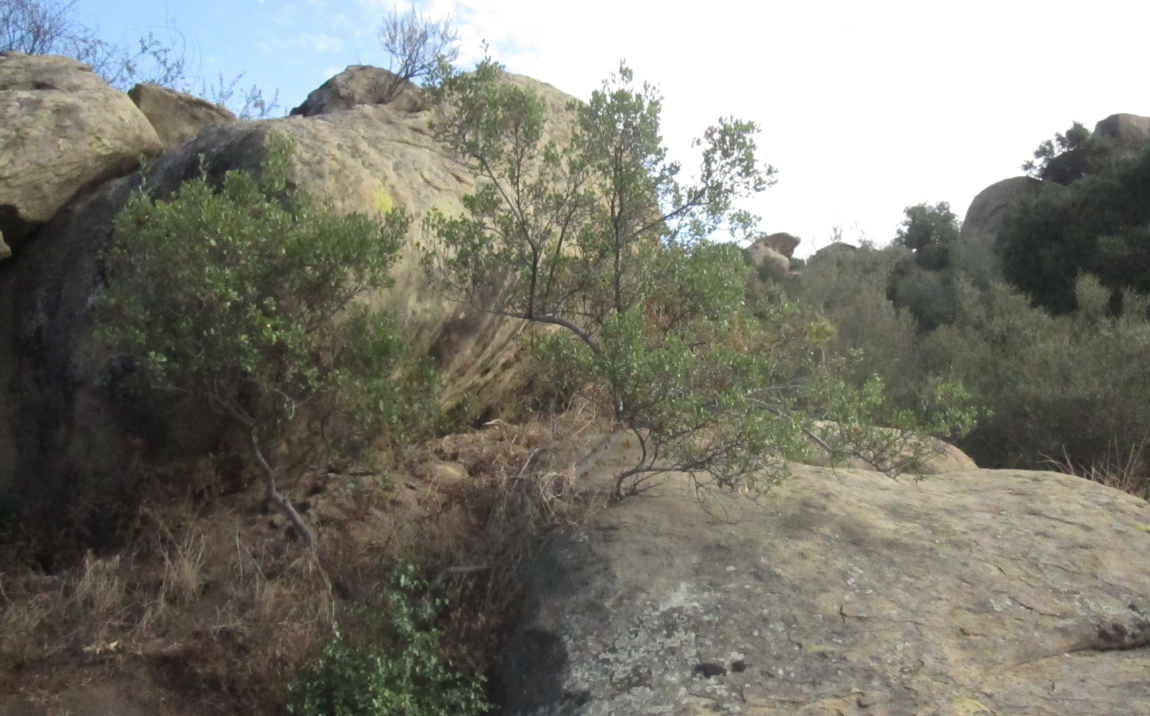 Here's a shot of Moschops and its environs in more recent times, taken during my search for the "tomb" in October 2011. This shot has some of the same rocks in the foreground that are seen in the movie shot, and these rocks turned out to be where the tomb entrance was situated. Moschops is pretty small in this shot, but it's in the background, along the skyline, a little right of center. I'll highlight it in the shot below. 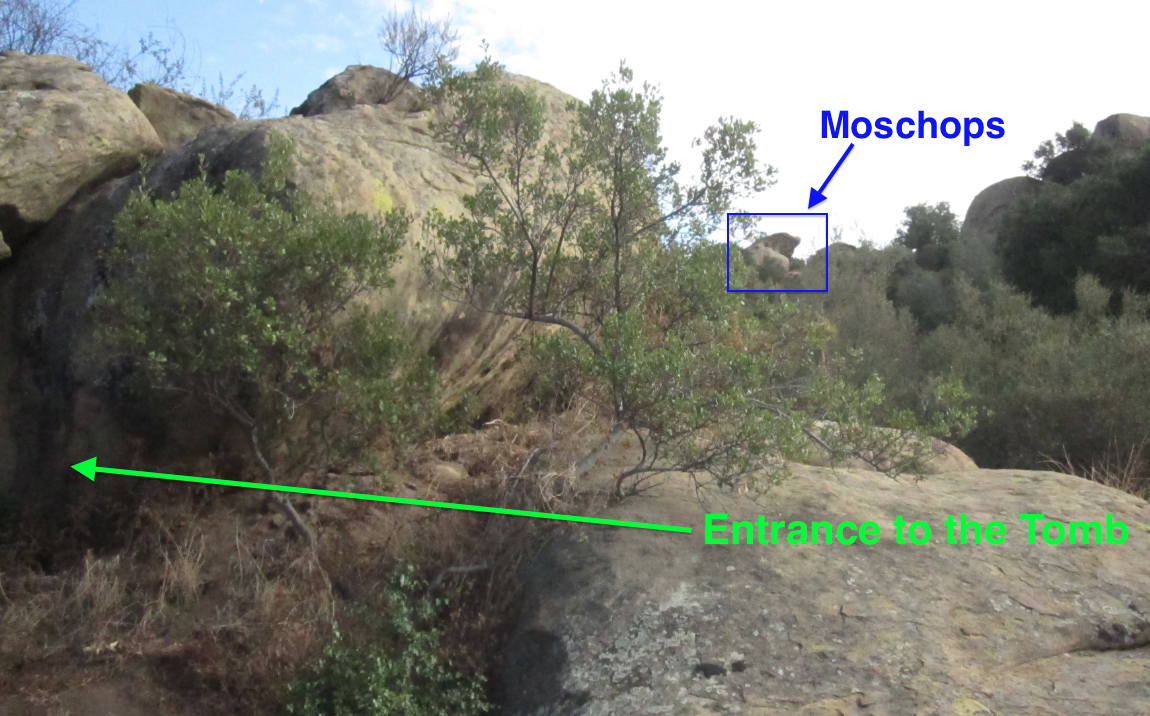 This is the same shot, with Moschops and the tomb entrance pointed out. 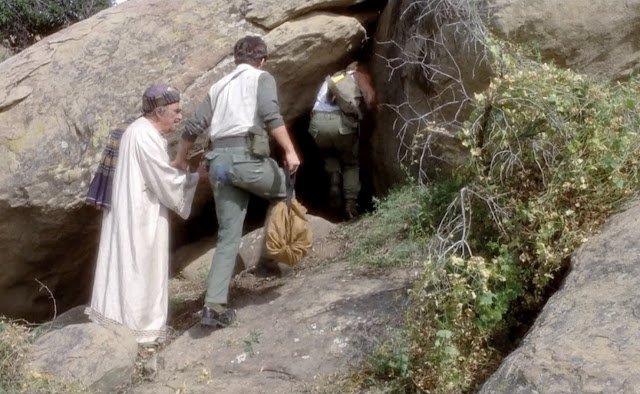 Back to the movie, at last the team arrives at the secret entrance to the tomb — and heads on in. 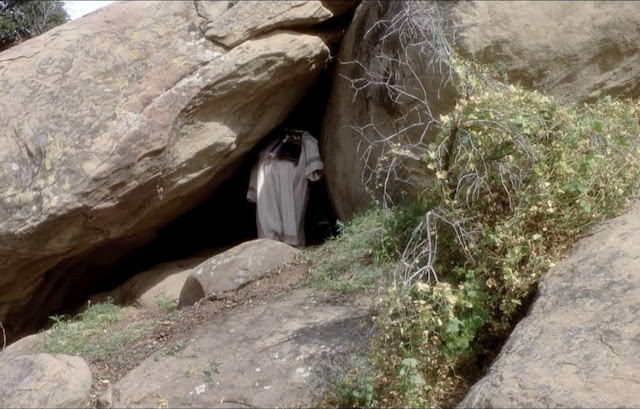 One surprising thing — after finding the place myself and realizing how small it is — is that the filmmakers were able to film the entry in a continuous shot and somehow all three of those guys squeezed in there, into what amounts to little more than a small crack between a couple of rocks. 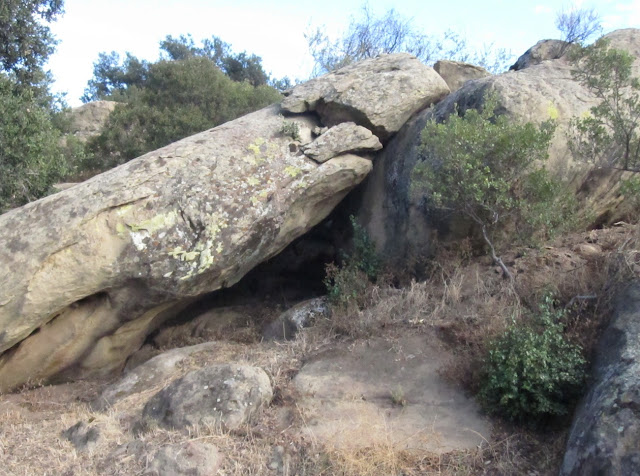 Here's the secret tomb entrance today, still readily accessible on the Upper Iverson's South Rim. The area surrounding this feature was heavily filmed, and it surprised me when I found this spot because cave entrances and arches are generally big attractions and got plenty of use during the filming days ... but this one appears to have been largely overlooked. I'm sure it will eventually turn up in other productions, but at this point I can say I've never seen it anywhere else. In honor of the movie's featured use of this spot, I've been calling this rock formation Tomb Rock, and referring to the cave itself as the Tomb (or alternately, Tomb Cave). 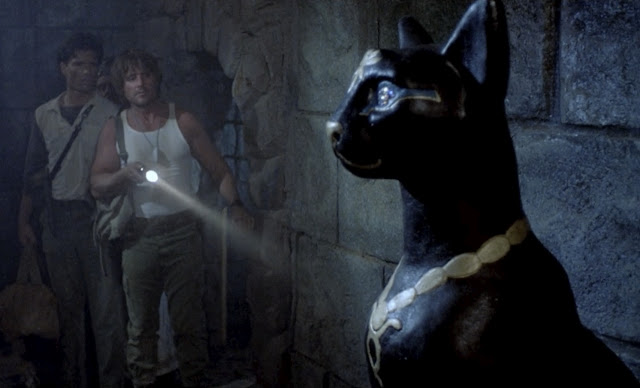 Sort of an amusing coda to the quest for the tomb is that once the boys got inside they found a huge hidden chamber, complete with plenty of treasure and smooth, carefully built walls — not at all what one would suspect from the outside!
Posted by Swami Nano at 2:46 PM