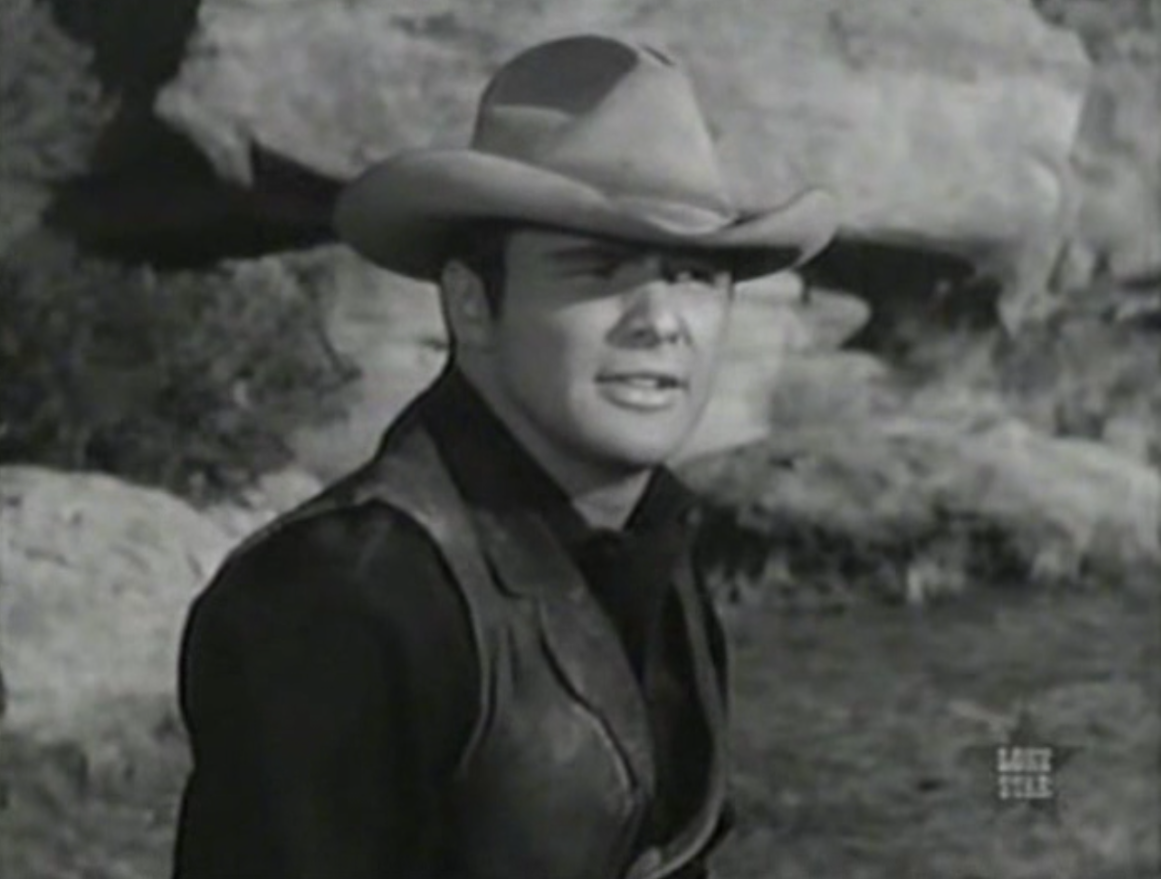 An episode of the Western anthology TV series "Zane Grey Theatre" brought a young Burt Reynolds to the Iverson Movie Ranch in 1961. Reynolds was 24 and was just starting to get his career rolling at the time the episode, "Man From Everywhere," was produced. 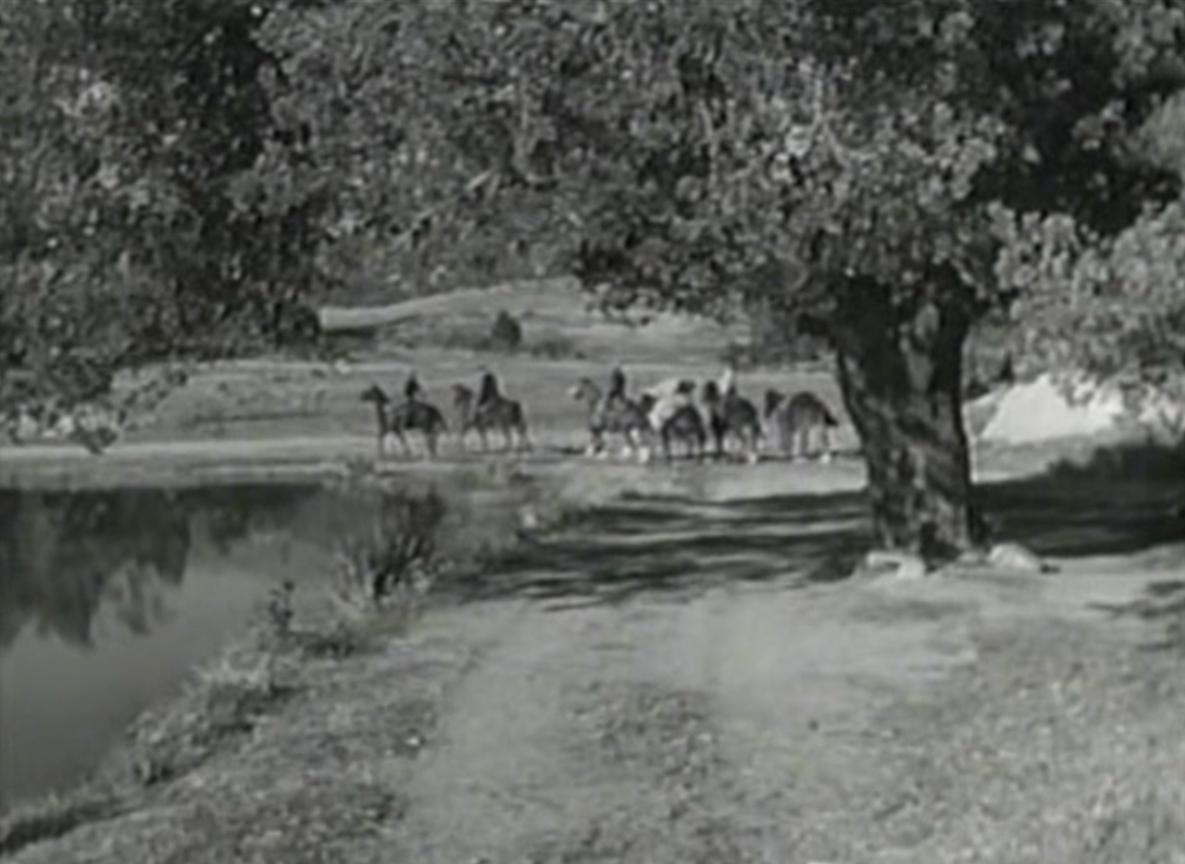 Iverson Pond, in "Man From Everywhere"

A key sequence in "Man From Everywhere" played out on the shore of Iverson Pond in the Sheep Flats area of the Lower Iverson. This was a few years after the Iverson Western street, which had been standing on the spot since 1945, was torn down — and a couple of years before Sheep Flats became the first part of the movie ranch to be sold off. Construction would begin in 1963 on what is now the Indian Hills Mobile Home Village. 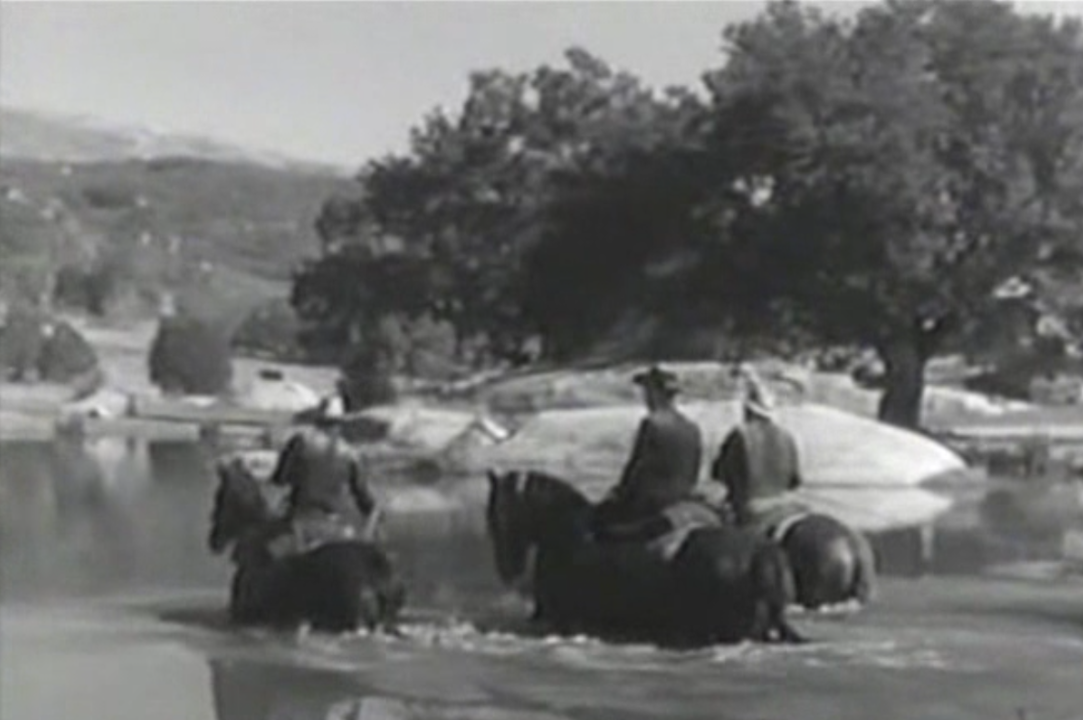 Iverson Pond wasn't particularly deep, making shots like this one, with riders walking their horses across the shallow body of water, relatively easy to shoot. 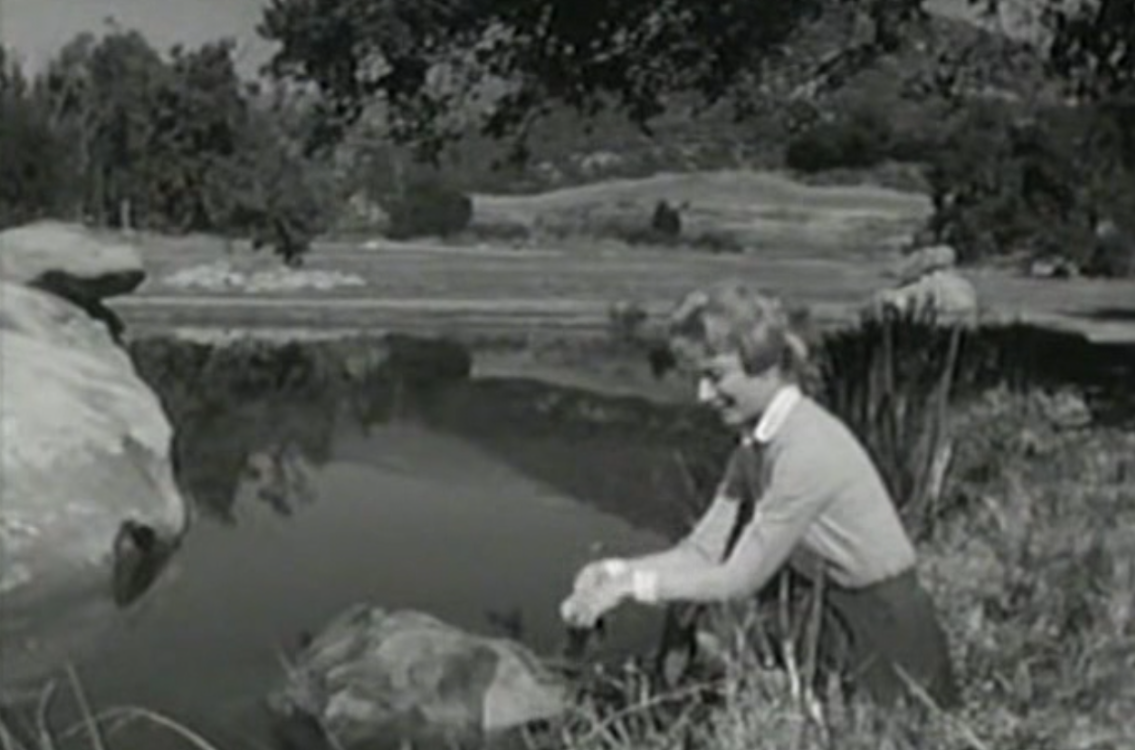 The Iverson Pond area featured a number of stacked rocks, two of which can be seen in this shot of Ruta Lee at the edge of the pond. Lee was 25 and already a TV and film veteran when she appeared as Jenny Aldrich in the "Zane Grey" episode. Now 79, she remains active in charity work along with occasional acting gigs. Ruta Lee and Cesar Romero — Pond Rock in the background

The scene also features film and TV veteran Cesar Romero, who would become known a few years later for playing the Joker on "Batman." He previously had a run on "Zorro" as Esteban de la Cruz, the trouble-prone uncle of the title character. In the above shot, Ruta Lee's character is having second thoughts about Romero's scheme as she appears to be falling for Burt Reynolds' character. And we get a glimpse of the pond area's most famous stacked rock, Pond Rock, between Lee and Romero. 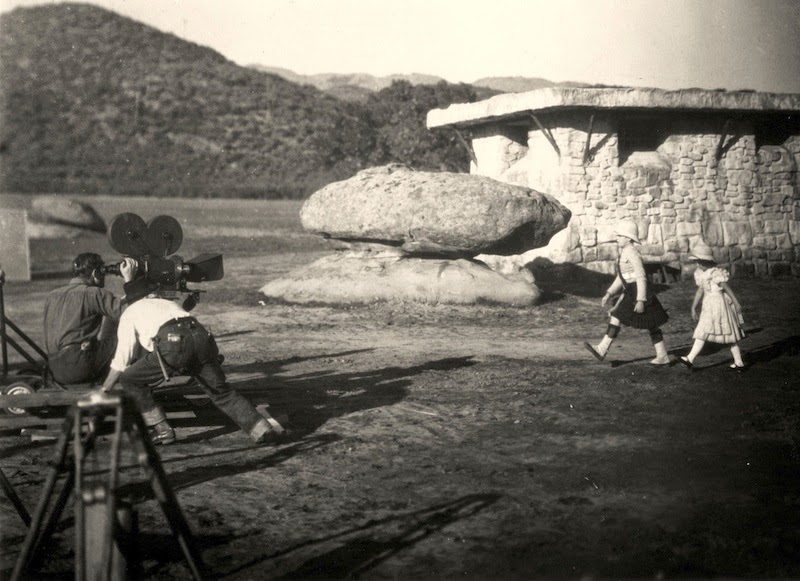 One of the best looks at Pond Rock is in the above promotional shot for the 1937 Shirley Temple movie "Wee Willie Winkie." Pond Rock was a feature of Iverson's Western street when the set was in place — from 1945 until about 1957 — and transitioned to being a feature of Iverson Pond in later years. You can read about Pond Rock's appearance in a Three Stooges movie and in "The Virginian," along with other appearances, by clicking here. 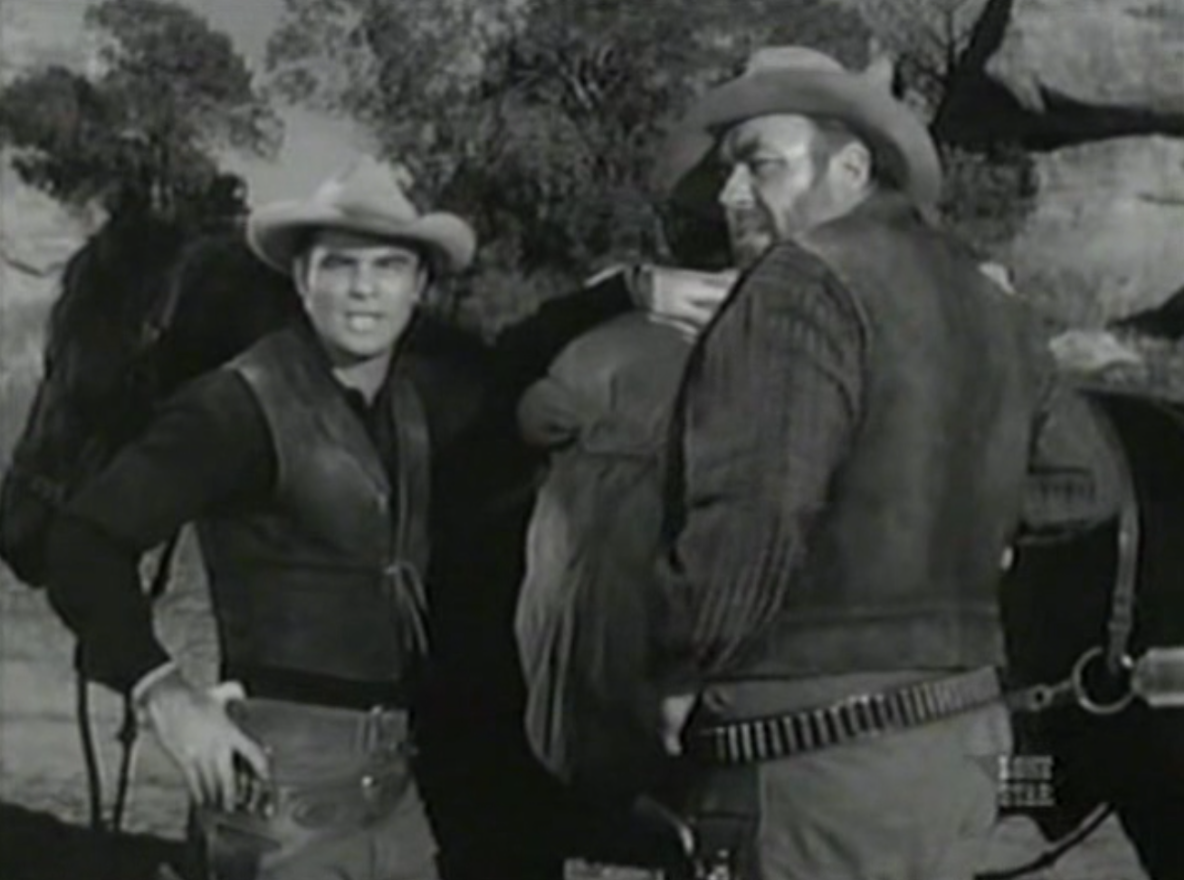 Burt Reynolds, left, and Peter Whitney in "Man From Everywhere"

Also appearing in the "Zane Grey" episode was character actor Peter Whitney, who was known for his massive stature. Note the size disparity between Whitney, at the right, and Reynolds. Whitney was a regular in feature films in the '40s and '50s before transitioning to TV and working steadily through the 1960s. He appeared across many genres, but got much of his work in Westerns. The Sheep Flats sequence provides nice views of a number of key Iverson features, capturing the look of the area during its final years as a filming location. The background of the above shot includes much of the Eucalyptus Grove — often called simply the Grove — along with a portion of the rock formation the Pirate Ship, at the left. 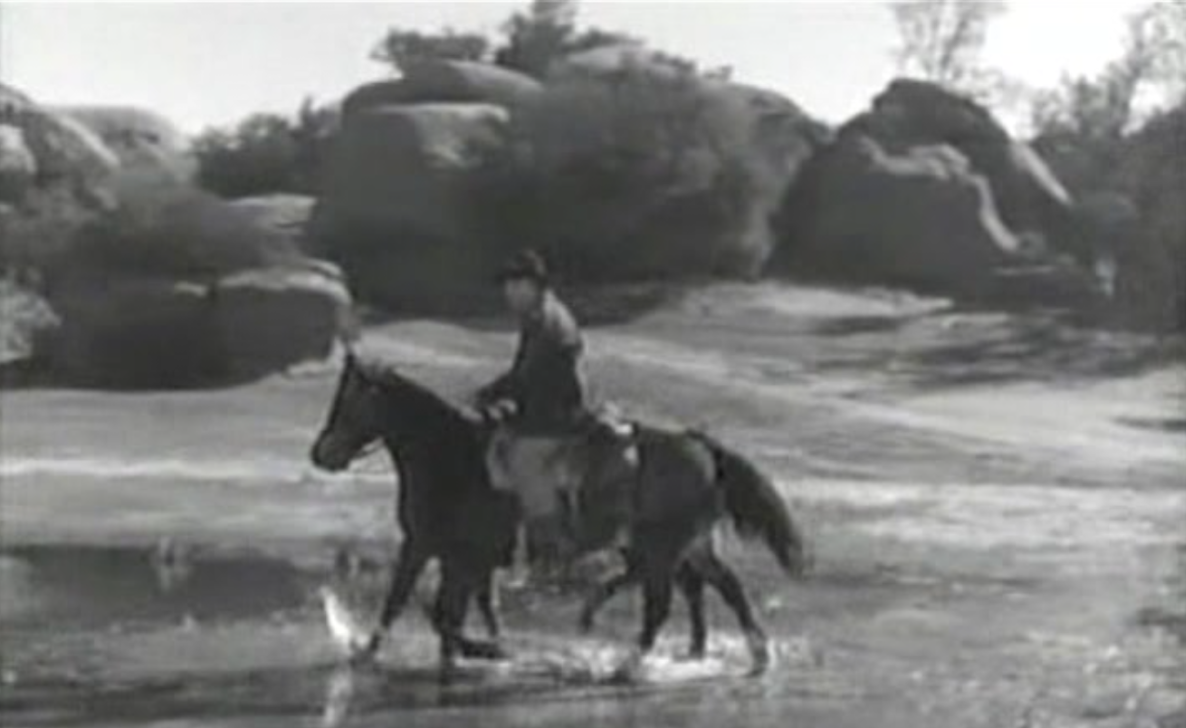 Here's another view of the Pirate Ship, captured in full this time. Also visible here is a small clump of rocks that up until a few years earlier was usually seen in the corral area behind the Livery Stable as part of Iverson Village. I call this clump the Livery Rocks. 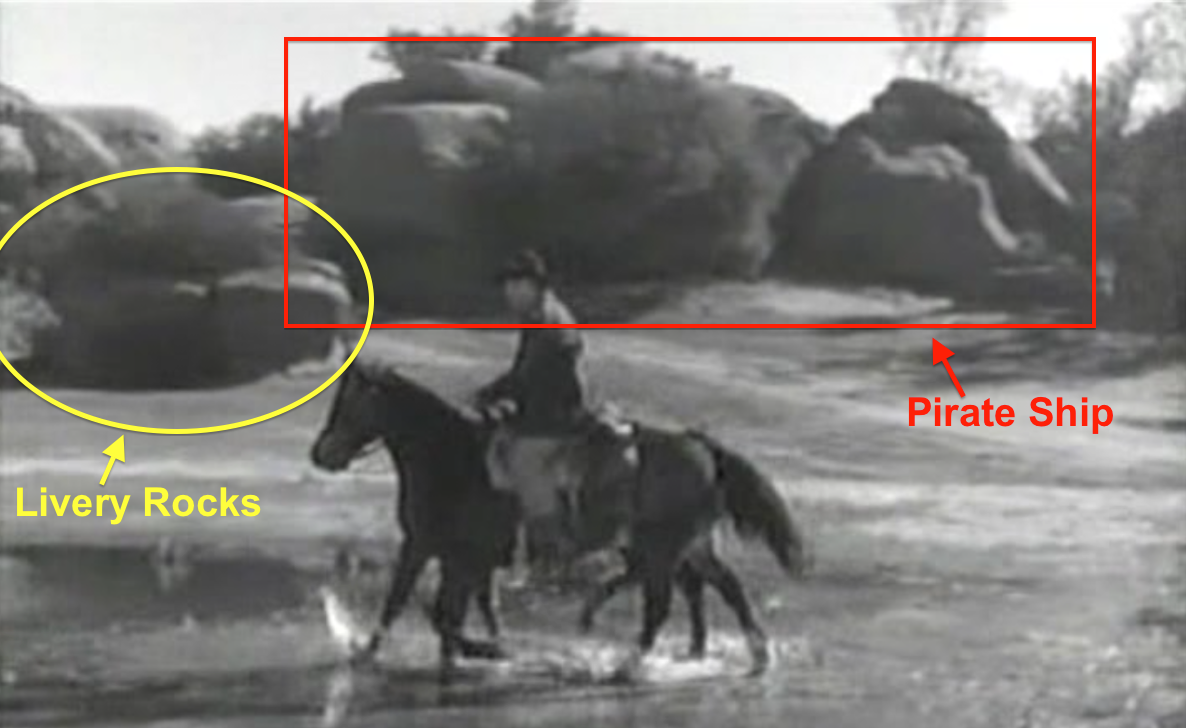 The Pirate Ship and Livery Rocks are identified in this version of the shot. 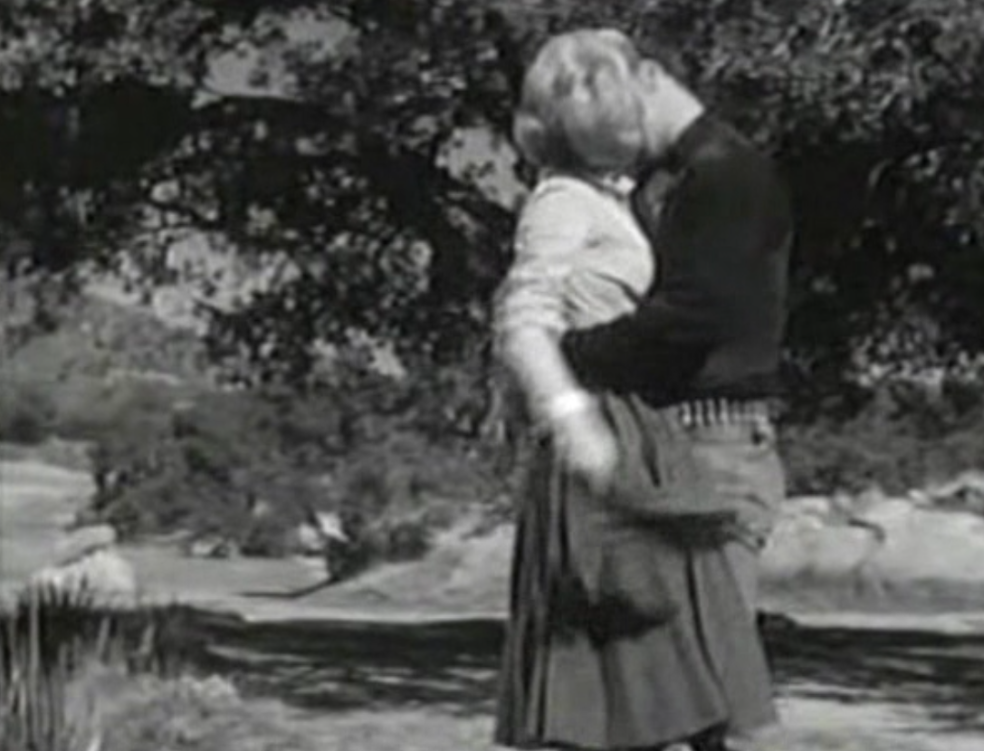 At one point in "Man From Everywhere," Burt Reynolds' character, Branch Taylor, surprises Ruta Lee's character by striding over to her and planting a big kiss on her. 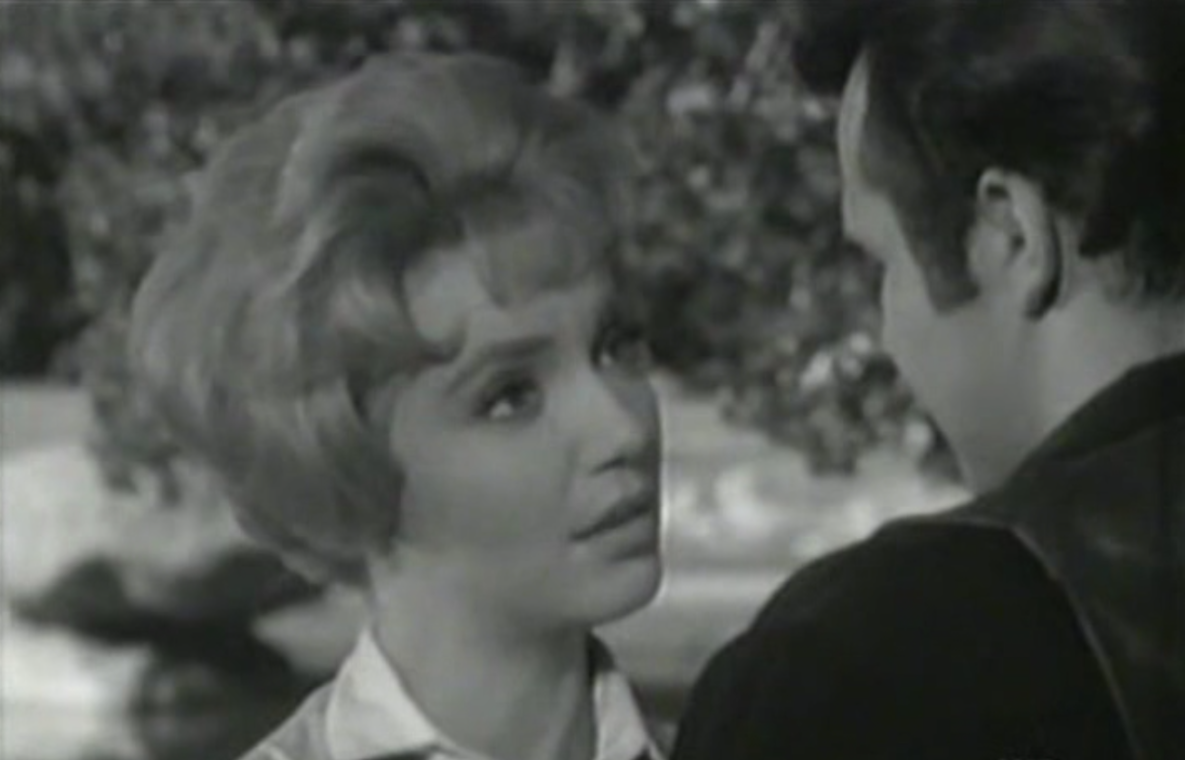 His move receives a favorable response, as the two actors appear to have some chemistry. Here again, Pond Rock looms in the background — it's visible in the bottom left corner. 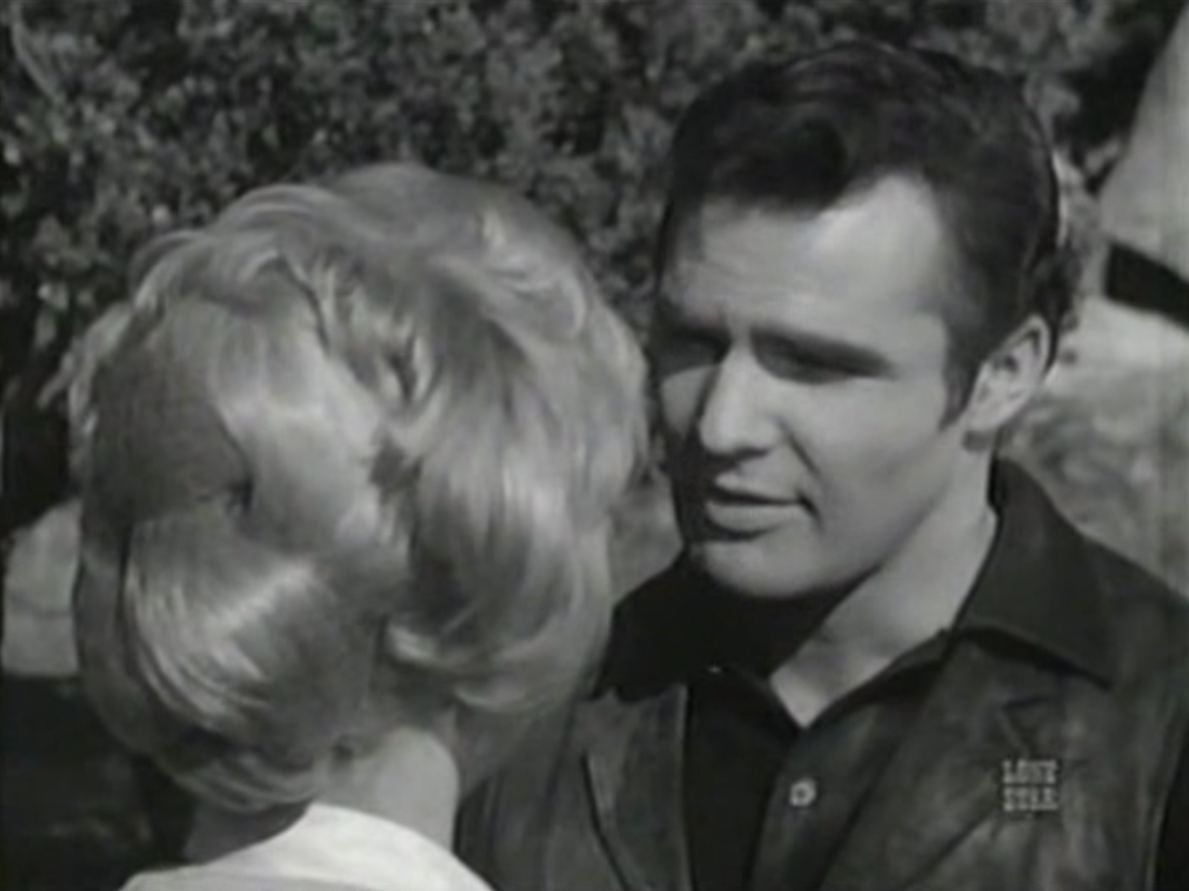 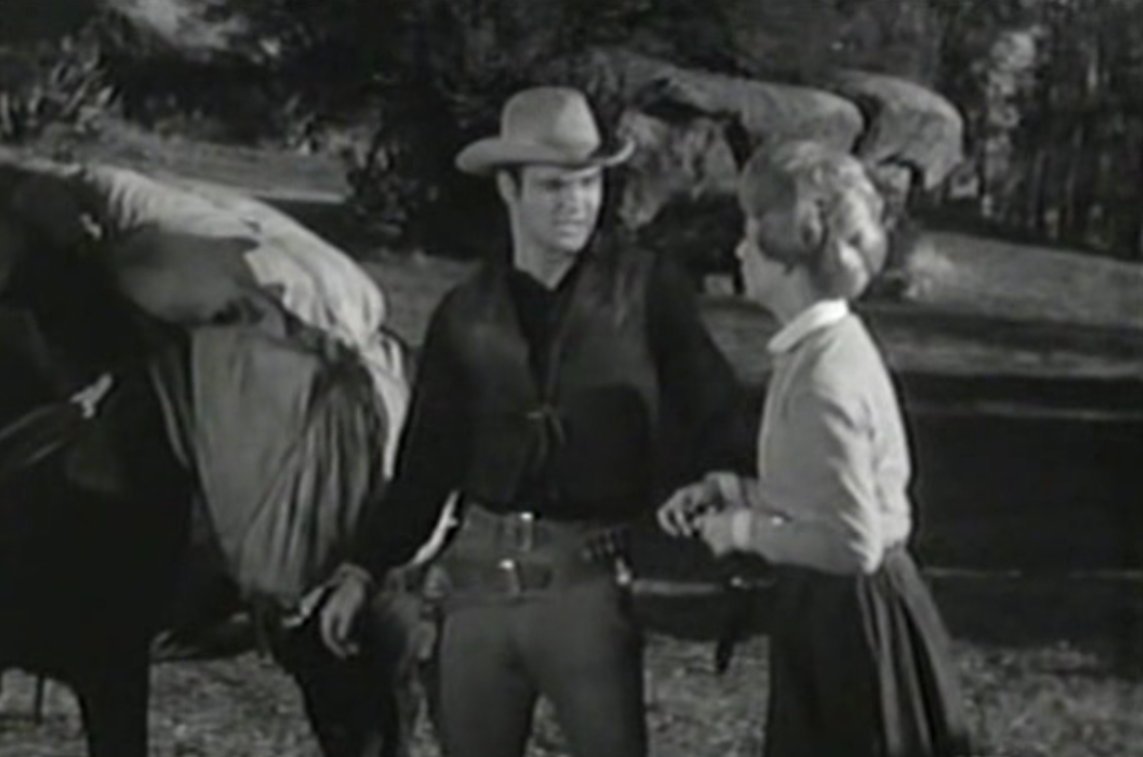 The romancing was all going on within spittin' distance of the Livery Rocks, seen here behind the young lovebirds. It was rare to get this good a look at the rocks, although they often appeared in the background in shots of the Livery Stable. 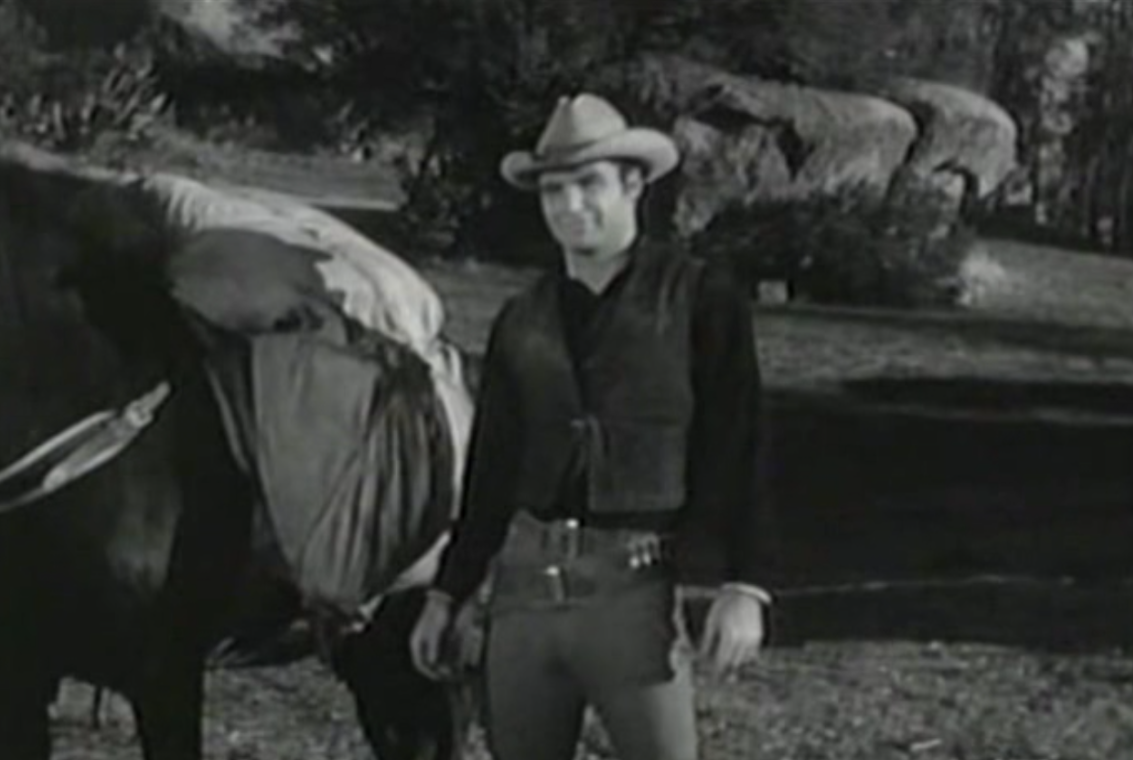 A cocky Reynolds admires the view as Ruta Lee walks away — and we get an even better view of the Livery Rocks. 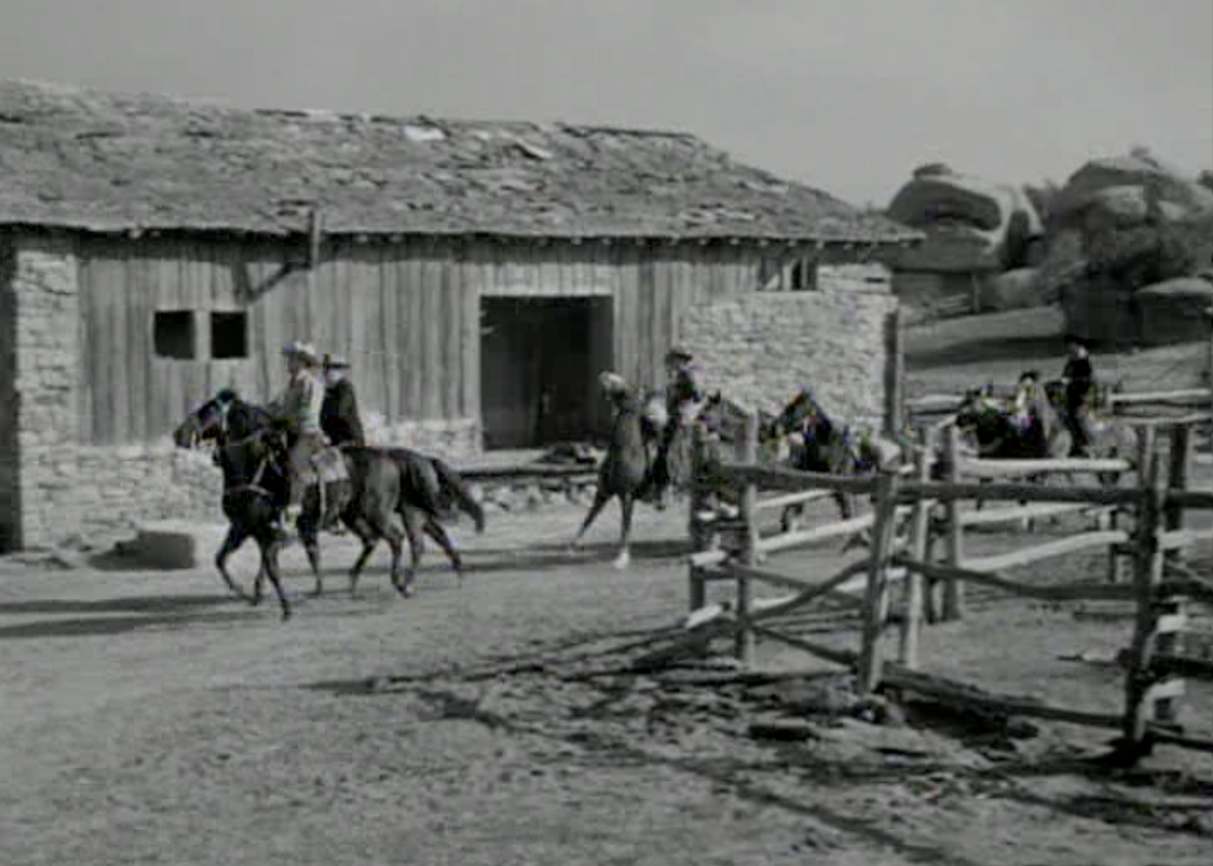 Here's a glimpse of the Livery Rocks about 10 years earlier, from the Three Stooges movie "Gold Raiders." The rocks can be seen casting a shadow at the far right of the frame, behind the Livery Stable — I'll highlight them in the next shot. 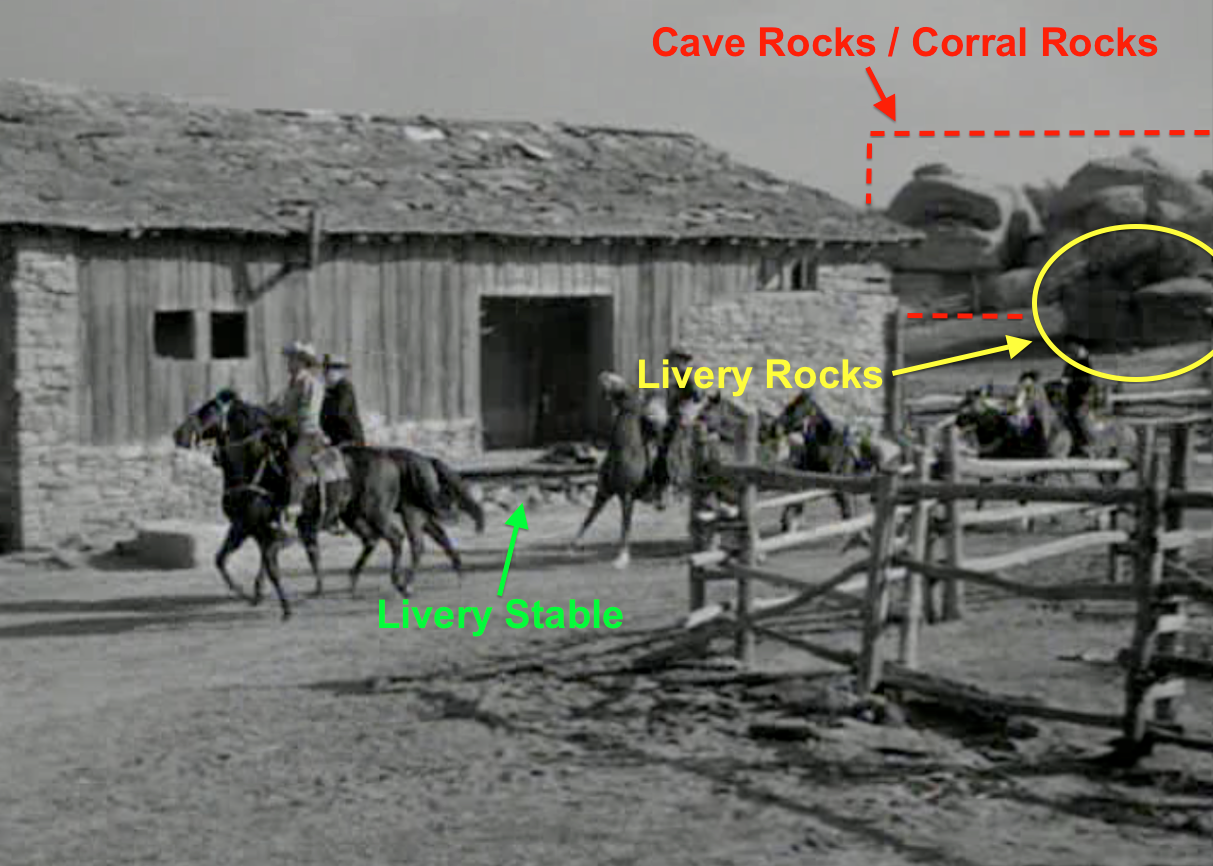 This version of the "Gold Raiders" shot points out the Livery Rocks and other key features in the photo. As I mentioned, the Livery Rocks were usually in the background when they appeared in productions shot while Iverson Village was in place. 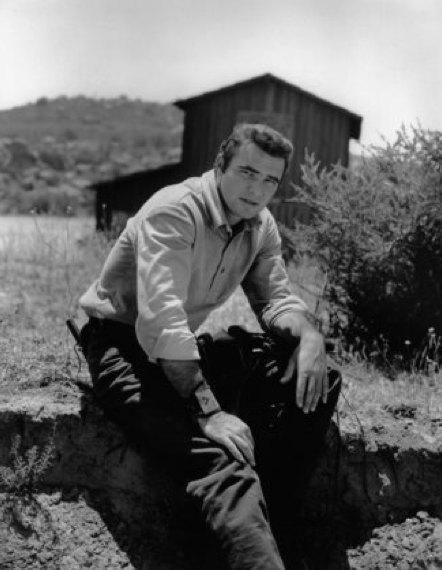 Reynolds would return to the Iverson Ranch — the Upper Iverson this time — in 1962, about a year after his "Zane Grey" appearance, for a memorable photo shoot on the Fury Set to help launch his run as Quint on "Gunsmoke." Additional photos from that shoot — along with a discussion of whether Reynolds shares a particular trait with Billy the Kid — can be seen by clicking here.
Posted by Swami Nano at 11:09 AM

I always watch his movies he and sally feilds has made it plain that they had a thing with one another its shows on bandit. That has be his true love in his real life