Is a piece of wall art on the spy show "The Americans" inspired by the Iverson Movie Ranch? 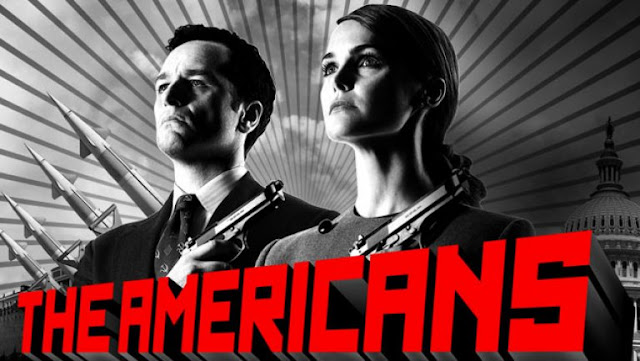 I'm a big fan of the FX series "The Americans," about Russian spies pretending to be a normal American family living in Washington, D.C., during the Cold War. 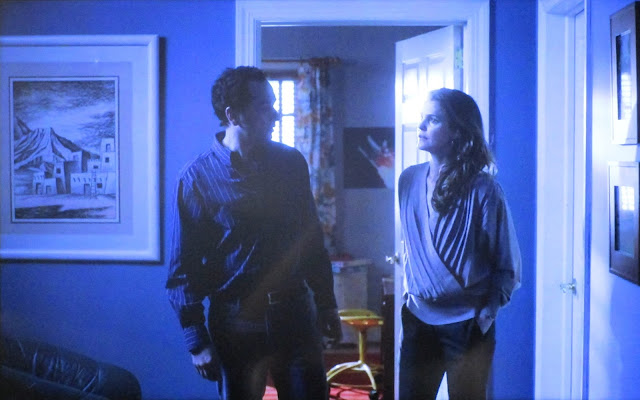 I never expected to find a reference to the Iverson Movie Ranch in the show, but I did spot something in a recent episode that qualifies at least as an intriguing coincidence. 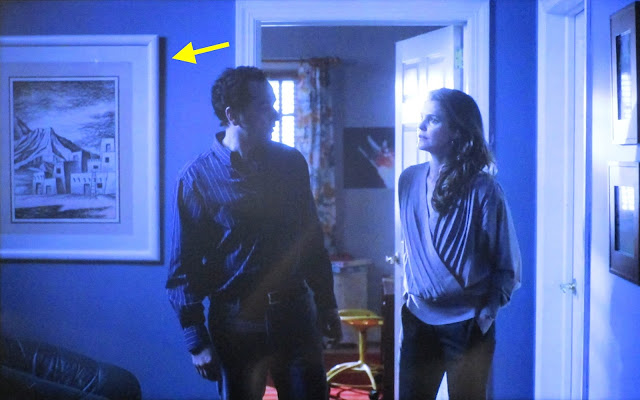 Take a close look at the artwork hanging on the wall at the left of the frame. 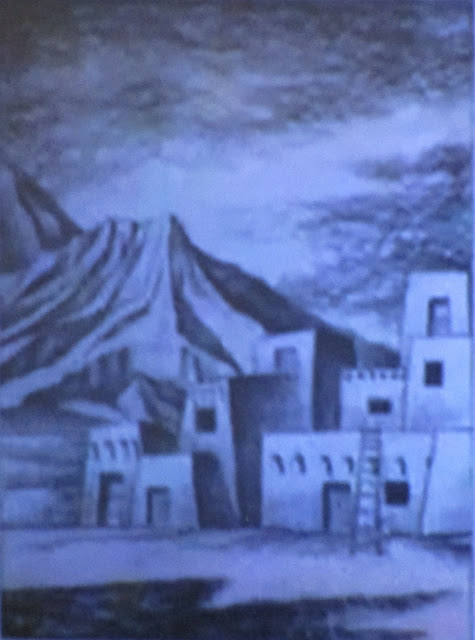 Here's a closeup of the artwork, which depicts something quintessentially "American" — an adobe village. 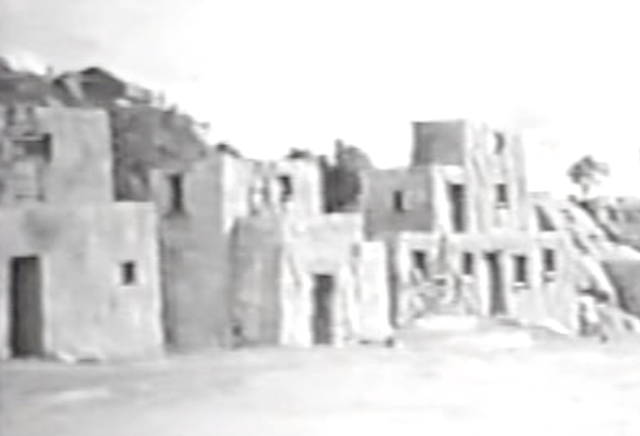 Is it just me, or does the adobe village in the "Americans" art bear a striking resemblance to the "Indian Village" that stood in the Iverson Gorge in the late 1940s and into the 1950s? 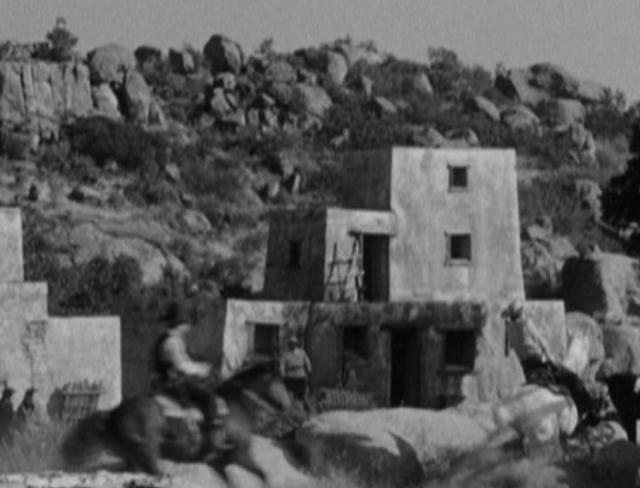 The Iverson Ranch's Indian Village appeared regularly in movies and TV shows during the decade or so that it was in place in the heavily filmed Iverson Gorge, roughly 1944-1954. 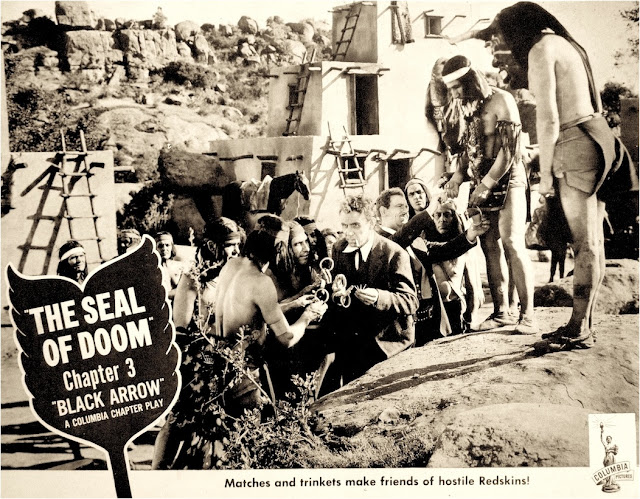 The Iverson adobes also found their way into movie posters and lobby cards. This one includes a note at the bottom that wouldn't fly these days. 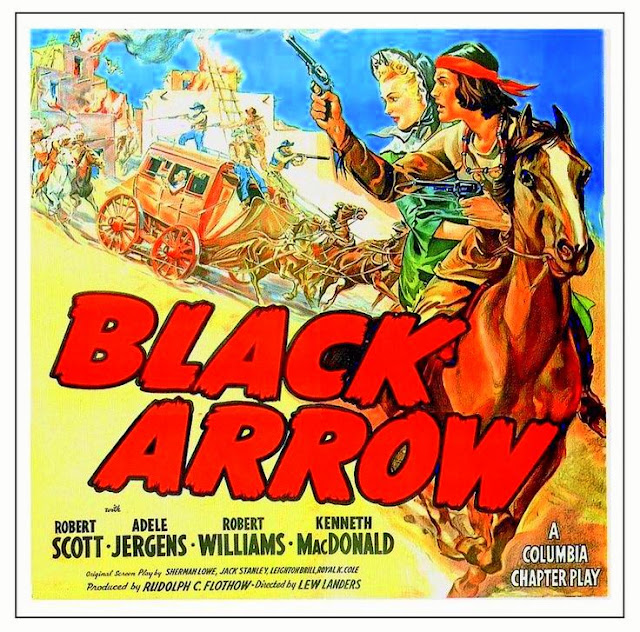 I love this poster for "Black Arrow," which includes an artist's rendering of the adobe village on fire. I'm not endorsing burning villages, I just like that someone went to the trouble to draw a version of the Gorge set. 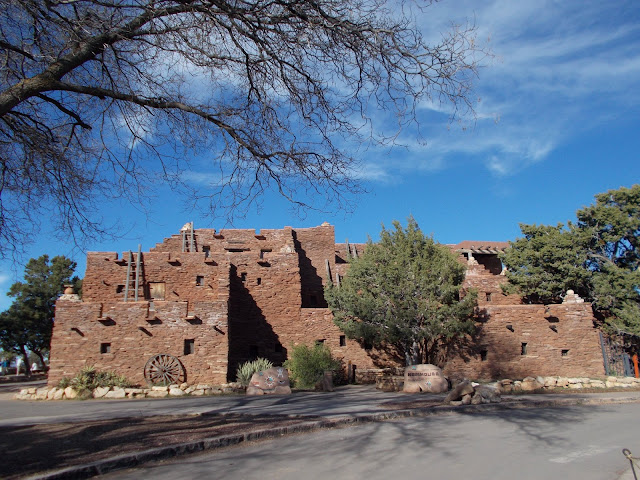 It may be that both the Iverson Indian Village and the "Americans" art draw inspiration from the Hopi House on the South Rim of the Grand Canyon, built as a living museum by architect Mary Colter in 1904. 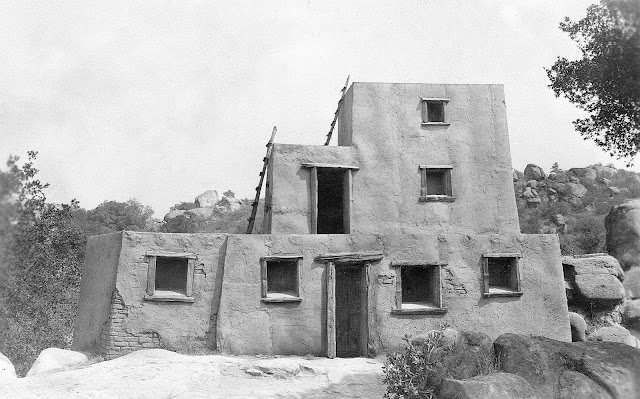 In fact, the Iverson family is known to have referred to the largest structure in the Iverson Ranch Indian Village as the "Hopi House." 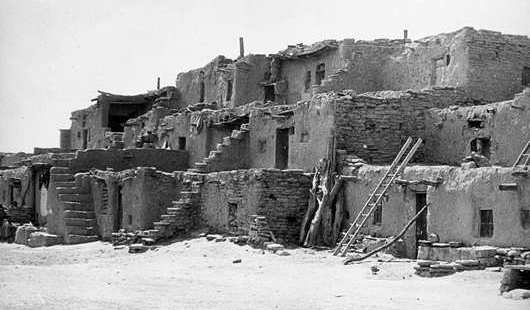 The Grand Canyon's Hopi House is said to be inspired by the much older Hopi village in Oraibi, Ariz. 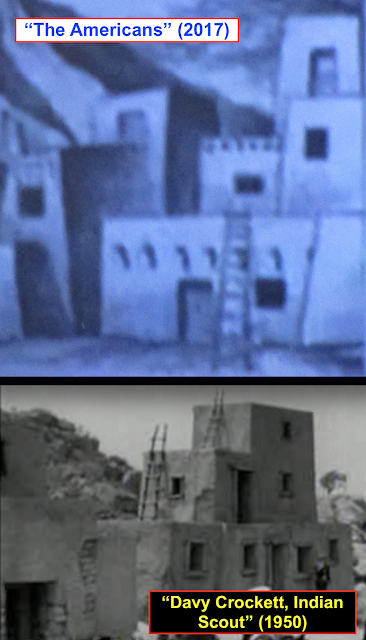 I suppose most Hopi-style adobe villages have design similarities. Still, the best match among all the examples I've found is between the village in the Iverson Gorge and the one in "The Americans." 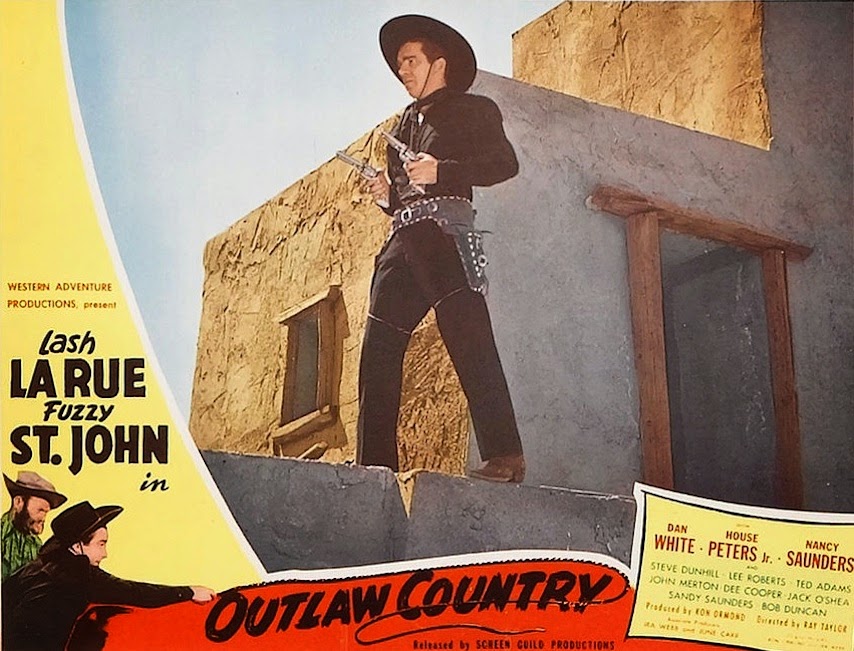 In this lobby card for the Western Adventure B-Western "Outlaw Country," Lash LaRue stands on the first-story roof of Iverson's three-story "Hopi House." 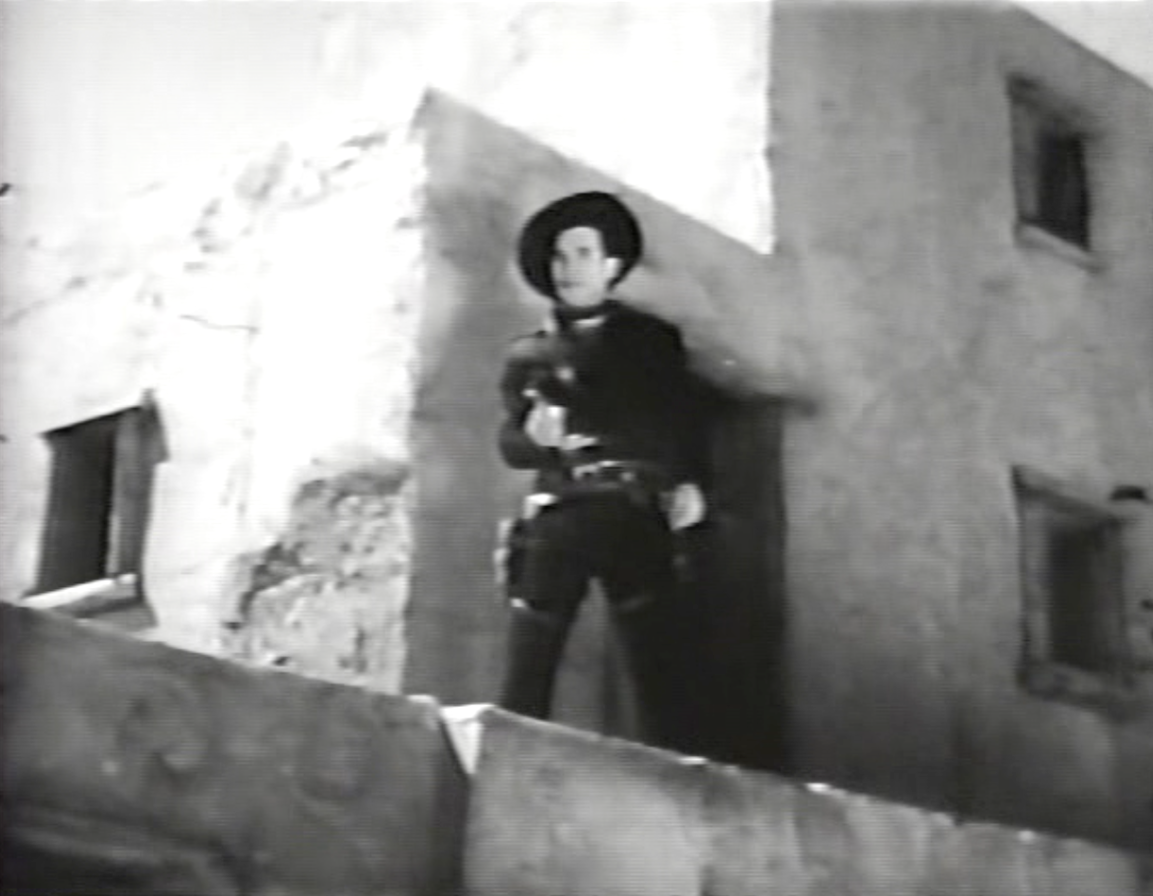 Here's Lash in almost the same spot, from the movie. While the movie shots aren't nearly as sharp as the lobby card, it's interesting to compare the two shots, which were presumably taken during the same filming session. 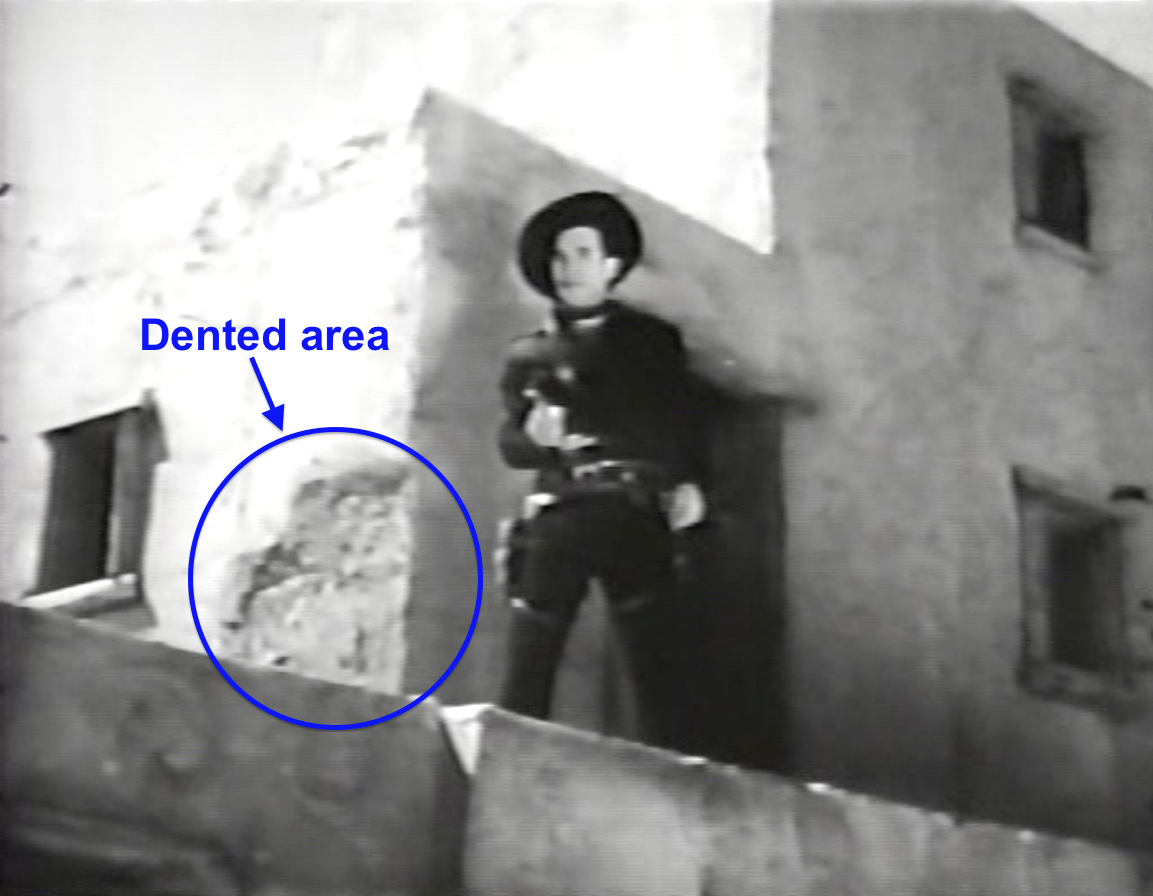 With Lash repositioned to the right, a dented area is exposed on the adobe structure. If you look again at the color lobby card, you can see this darker, recessed area between Lash's legs. Maybe there's a more polite way to say that, but I haven't thought of one. 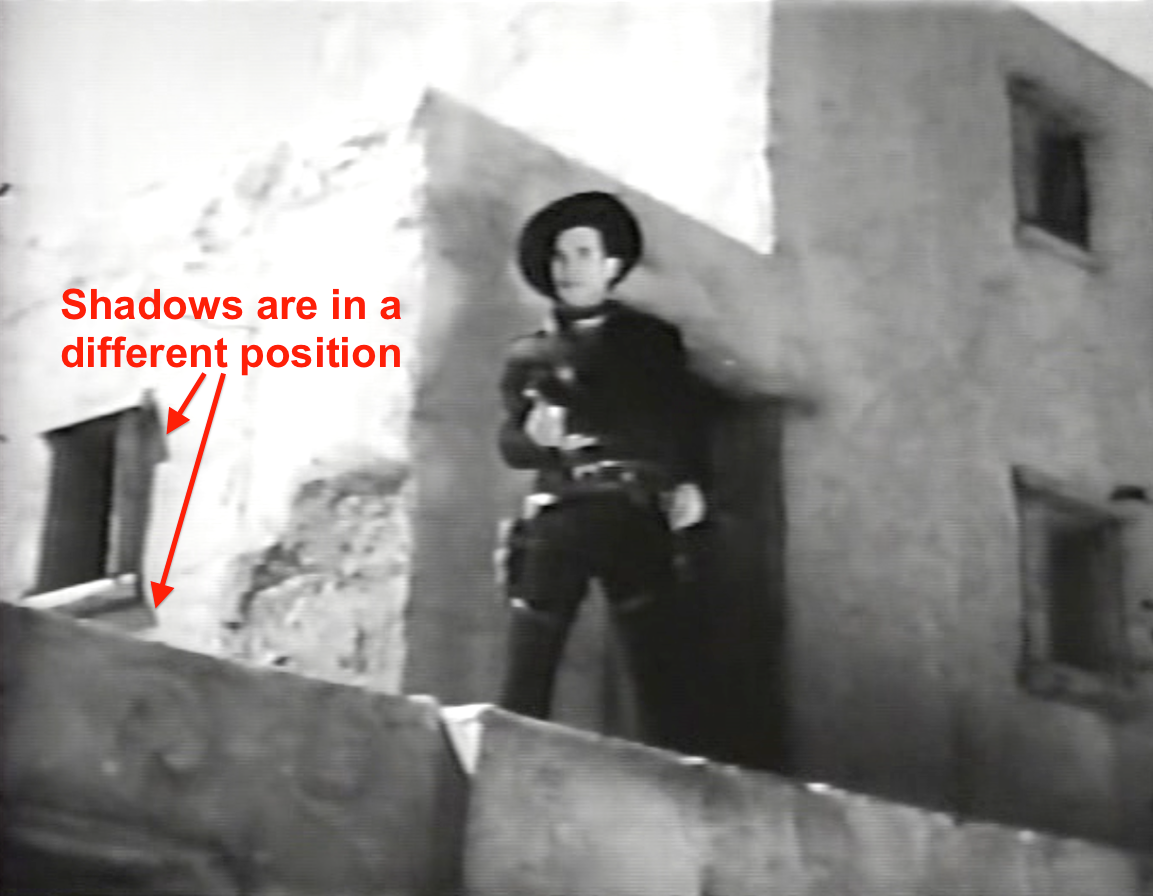 Also note that the shadows are slightly different between the two shots. Based on the orientation of the buildings, I'd say filming took place in the morning, with the promo shot taken a short time after the movie shot. 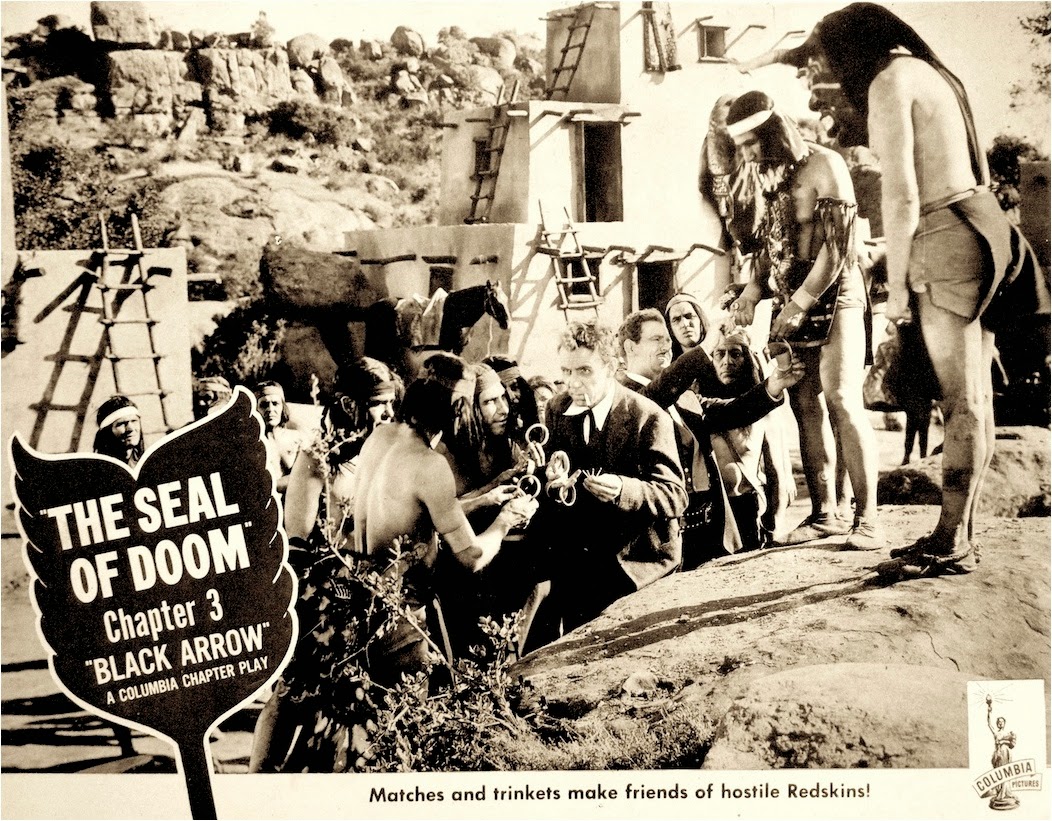 The "Black Arrow" lobby card, from four or five years earlier, appears to show the same section of the adobes seen in the Lash LaRue sequence. "Black Arrow" is the earliest production I've run across that featues these adobes, and production records indicate that the village was in fact built originally for "Black Arrow." 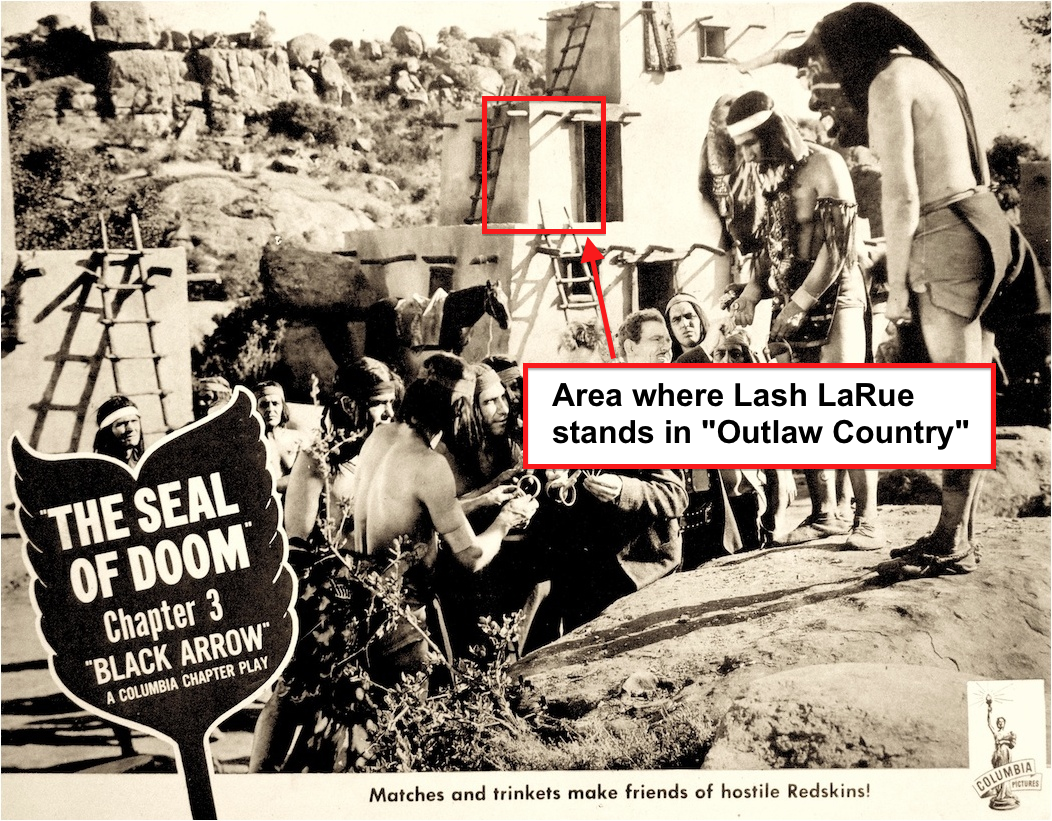 I've noted the spot where Lash LaRue will stand a few years later in "Outlaw Country." It's also worth noting that the rocks making up the Hole in the Wall area can be seen at top left. These rocks remain in place today. 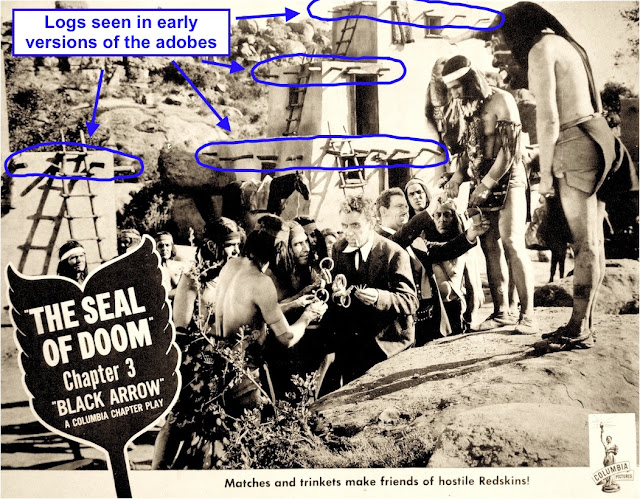 Early shots of the adobes show that back around 1944 they had fake logs sticking out of them near the roofline, similar to what we find in the adobes in "The Americans" and in the real-world examples. 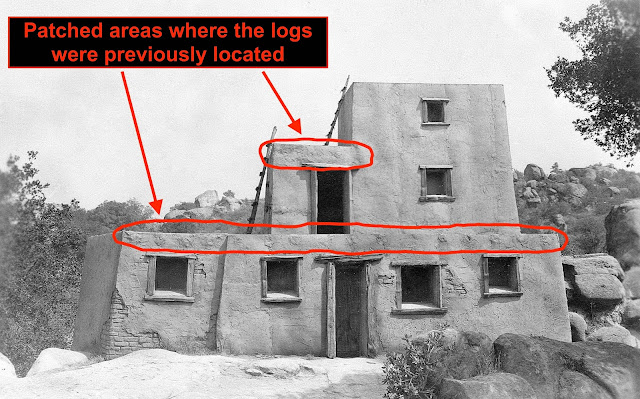 Those logs were gone by the late 1940s. But if one looks closely at the circa 1950 photo, the clearest shot we have of the Hopi House, it's possible to see where the wall was "patched up" after the logs were removed.
Posted by Swami Nano at 10:07 PM

Not many of us are commenting on this interesting stuff. It's also sad to hear how much of the California landscape has been concreted over. I'm reading Paul Green's book on The Virginian TV series where it says Westlake Village is built over one of the main locations.

I wonder who painted the painting prop in the TV show? Any way you could find that out?

just saw it today in a movie with eddie dean