The obligatory "then and now" shot of two Garden of the Gods fixtures, as seen in "Stagecoach" ... and some confusion about rock names 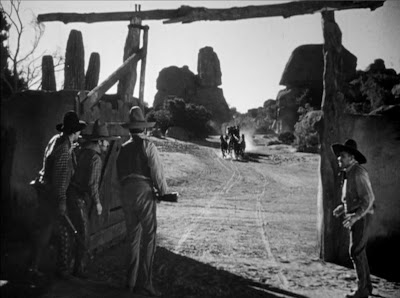 "Stagecoach" (1939) — the iconic scene with background provided by the Garden of the Gods,
on the Iverson Movie Ranch in Chatsworth, Calif. 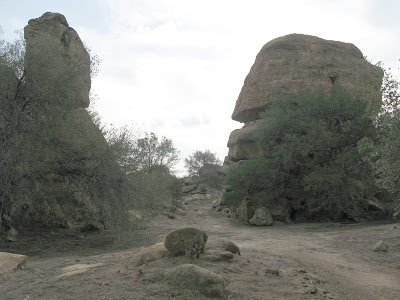 Same rocks as they appear today

Sphinx, on the right, also known as Eagle Beak, and Tower Rock, on the left, also known as Indian Head and sometimes as the Pinnacle, are among the most famous and most widely filmed rocks on the Iverson Movie Ranch. They're located in the Garden of the Gods on the former Lower Iverson, an area that has been preserved as a park.

" (top photo) is one of the most high-profile appearance of Iverson rocks on film, rivaled only by Iverson's other extremely high-profile feature, Lone Ranger Rock, and its appearance in the opening sequence of the "Lone Ranger

Sphinx, Tower Rock and Lone Ranger Rock tend to be the entry points for Iverson research, and they clearly have their appeal and their glamour. But in my own Iverson research, once I got past the initial excitement of seeing these familiar monuments in real life, I went on to discover hundreds of other rocks at the movie ranch that I found at least equally interesting.

One bit of trivia about these two giants concerns their names: Indian Head is a name that has been applied to at least four different rocks at Iverson, including both of these. (Click here for a post that runs through all of Iverson's so-called "Indian Heads.") Sphinx (or Eagle Beak) has itself been referred to as Indian Head at least once in a movie. Additionally, before Lone Ranger Rock became identified with the Lone Ranger, it was known as Indian Head. And there's another Indian Head on the Upper Iverson, also known as Wrench Rock. 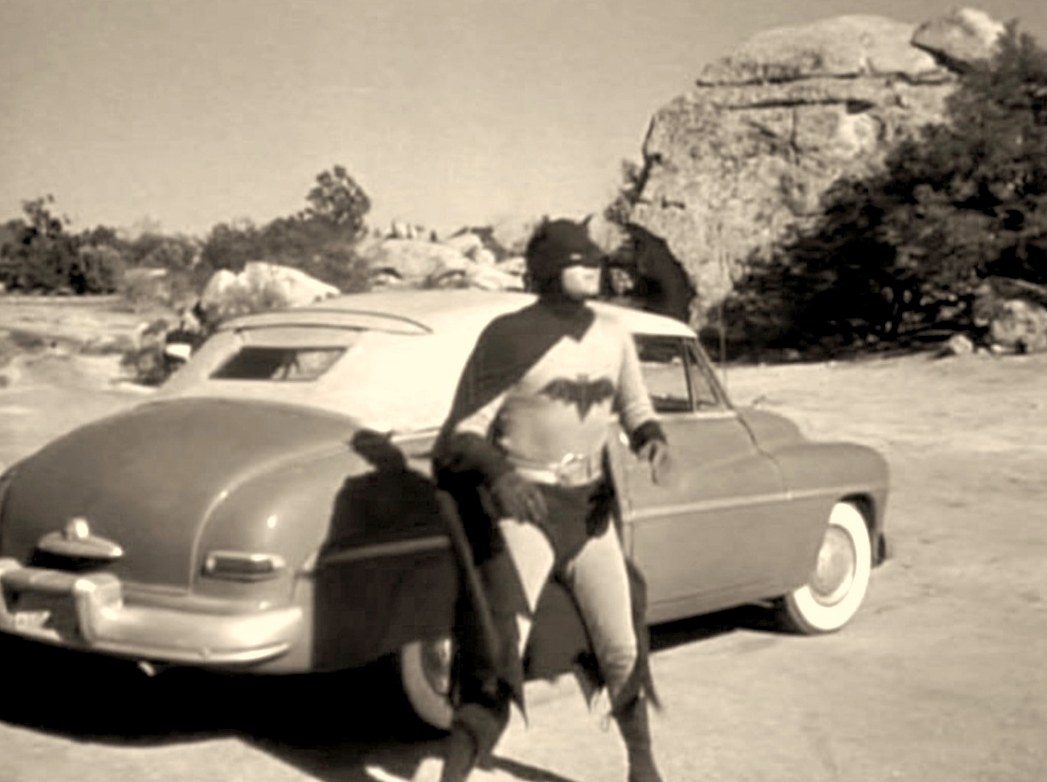 The name "Indian Head" could easily have also been given to another Iverson rock, known as Batman Rock. Meanwhile, the name "Eagle Beak," which is now in wide use (probably more common, for example, than Sphinx, which is more correct), apparently came about as a result of an error, as it was reportedly confused with a different rock, Eagle Beak Rock, located on the Upper Iverson.

The sad story of Rock Island ... and what does any of this have to do with David Lynch? 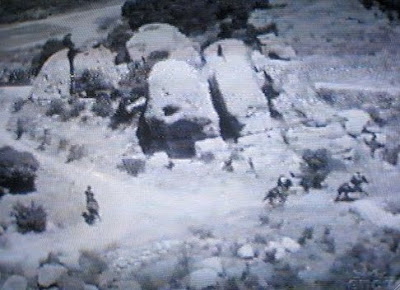 Rock Island, seen in the above screen shot, wasn't one of the most frequently filmed rock formations on the Iverson Movie Ranch, but it showed up from time to time and usually made quite an impact. Rock Island is the name given to the six or so towering structures clustered together here with chase roads on all sides. 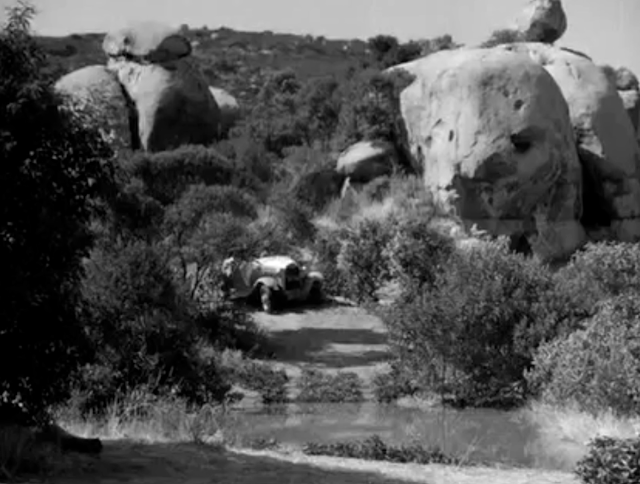 Early in my Iverson research I took on the challenge of trying to find Rock Island. And it was indeed a challenge to determine these noble giants' exact location — or their former location. I gradually came to the conclusion that Rock Island had been a victim of the bulldozers, destroyed several years ago to make way for condo development and Redmesa Road. However, at Iverson, things are not always as they seem, and if you go to this post and scroll down about eight or nine photos you can get a look at what Rock Island looks like today — not necessarily "destroyed," but let's just say, considerably diminished in stature. 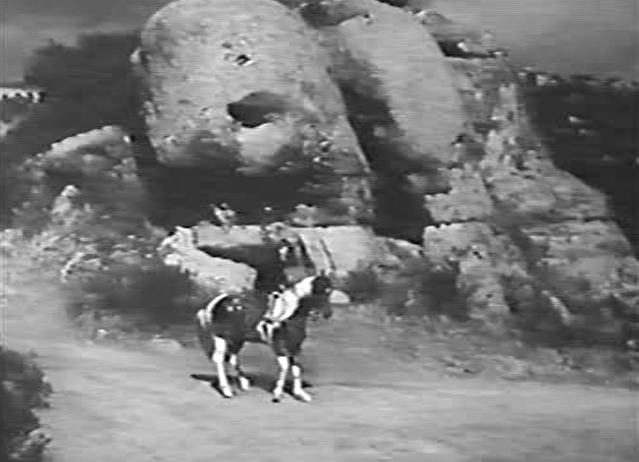 I don't know whether it's true but I've heard that the people doing the initial stages of condo development on the former Iverson property back in the 1980s did the deed fast and not always with permits, to avoid giving any of those annoying preservationist groups time to do something about it. Chatsworth, Calif., does have an active historical society and other activist groups that are interested in preserving the town's cultural heritage, its equestrian traditions and its movie history. 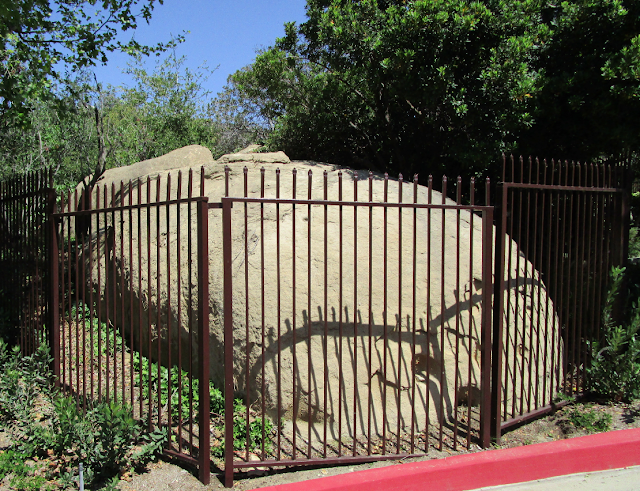 Whether it was done legally or not, development put a damper on Rock Island's freedom of expression — a fate that also befell a number of other key formations at Iverson starting as far back as the 1960s when the Indian Hills Mobile Home Village was built. But fortunately a good number of the ranch's "classic rocks" are still around. They're sprinkled among condos, gated communities, sprawling mansions, apartments and a trailer park, or in some cases simply overgrown by trees and bushes, but more of them have survived than have been removed. And even though sandstone is soft by rock standards, the ones that remain are likely to still be around centuries after the manmade stuff — the condos and all that — is long gone. 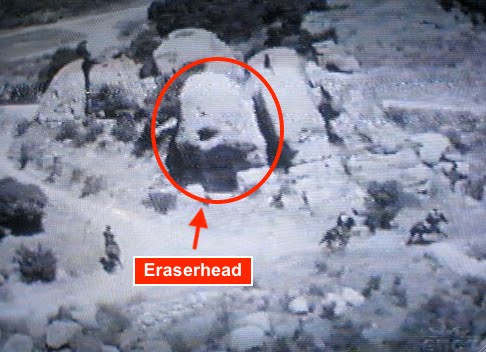 The figure in the center of the shot, which seems to have a little round mouth and no face, is Eraserhead

, for reasons that should be apparent to anyone who has seen the David Lynch movie. Because of its unusual appearance and its position as a cornerstone, Eraserhead is often the rock that immediately identifies the group. Rock Island can be tricky to find in productions because it is shot from a number of different angles and it looks different from each one. But it tends to be an exciting feature to spot in the movies, if only because it's no longer possible to see it in its full glory in person. 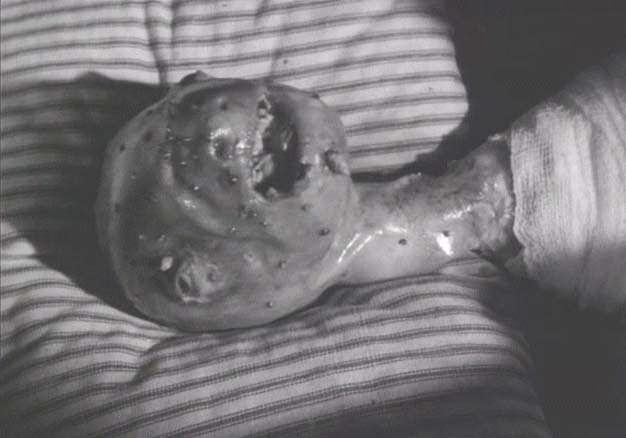 Since this post was first published, I've done a major research project on Rock Island and put together an extensive viewer's guide on the formation, which you can see by clicking here. 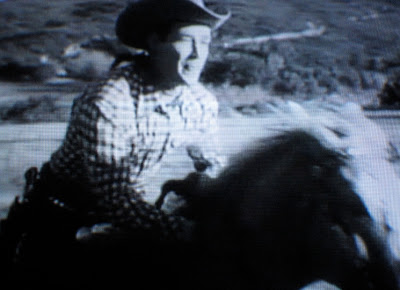 Sometimes what you see isn't what you get. This shot of Roy Rogers riding Trigger on the Upper Iverson, taken from a 1952 episode of "The Roy Rogers Show," is in fact printed backward. That is, left is right and right is left, like a mirror image. That's the way they ran this scene in the episode, because they wanted to have Roy riding from left to right, or west to east. It would have cost money to have a crew go out and shoot him riding, and they already had some perfectly good footage of him riding in the other direction, so they just flipped it and used the same footage twice. 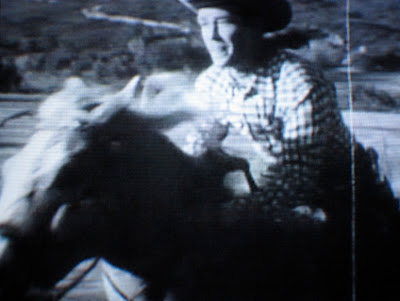 Here's another shot from the same episode of the show, in which Roy is shown properly oriented, in virtually the same spot. You can see from the road going up the hill in the background that they didn't bother to shoot Roy riding in both directions, they just flipped the whole shot and ran the same footage twice. Flipping the shot was just one of the tricks used to stretch the budget, and in the days before DVD, Blu-ray, mp4 — heck, even before VHS — before we had freeze-frame and slow-motion, before viewers were able to take a close look at those backgrounds — and before people like me became obsessed with every little detail of the Iverson Movie Ranch — they could get away with it.

Click here to see another example of flipping the shot, from the TV show "Adventures of Kit Carson."
Posted by Swami Nano at 11:06 AM No comments: