Lone Ranger's bushwackers lying in wait at the Phantom 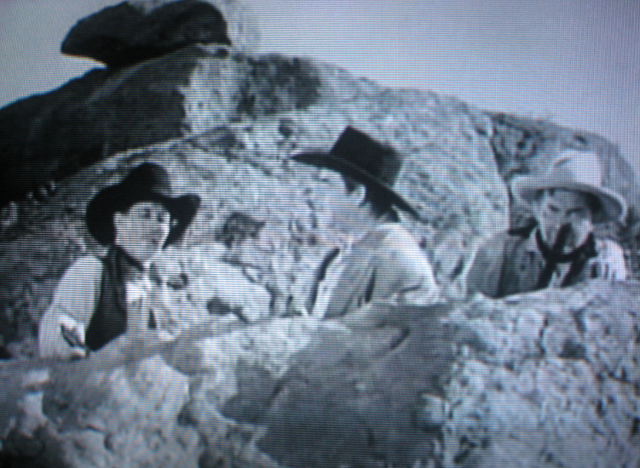 Click here to go to an updated, more detailed and all around better post about this same scene.

Otherwise, feel free if you still want to read the original post from 2010:

Here's a screen shot from one of the most important scenes in the TV show "The Lone Ranger," shot in 1949. This famous ambush sequence is also seen in the 1952 film version, which was a re-edited version of the first three episodes of the show. It took a while to figure out where this scene was shot. The smaller rock at the top is an obvious clue, but a lot of rocks at Iverson have similar "pebbletops" — including one rock called Pebblehead, located not far from this one. After several months I finally put the pieces together and realized that this rock is the Phantom, which you can get a better look at here. It's in Garden of the Gods on the Lower Iverson Movie Ranch in Chatsworth, Calif. 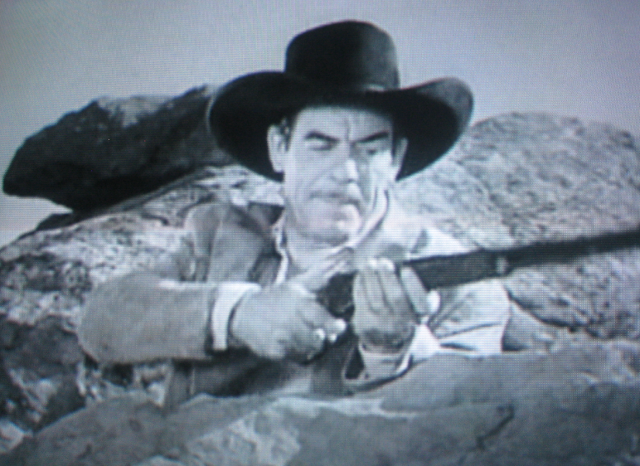 Glenn Strange as Cavendish — behind him is the rock the Phantom, in Garden of the Gods

These shots of the bad guys lying in wait are part of the infamous sequence that sets up the whole saga of the Lone Ranger, in which bushwhackers led by Glenn Strange's character Cavendish wipe out a party of Rangers in a brutal ambush — including almost killing the man who would go on to become the Lone Ranger. The sequence is spliced together from footage shot here in Garden of the Gods and footage filmed elsewhere in L.A., in Bronson Canyon, where the cave featured in the Batman TV show also plays a part in the Lone Ranger saga.
Posted by Swami Nano at 6:40 PM 1 comment: 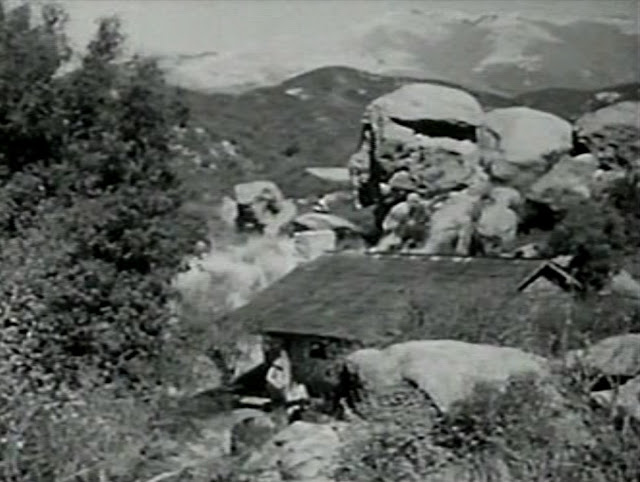 This screen shot from the old Eddie Dean B-Western "Prairie Outlaws" features a cabin that appeared on the South Rim of the Upper Iverson starting in about 1944. The cabin is usually called "Hidden Valley Cabin," and has been alternately referred to simply as "Stone Cabin." 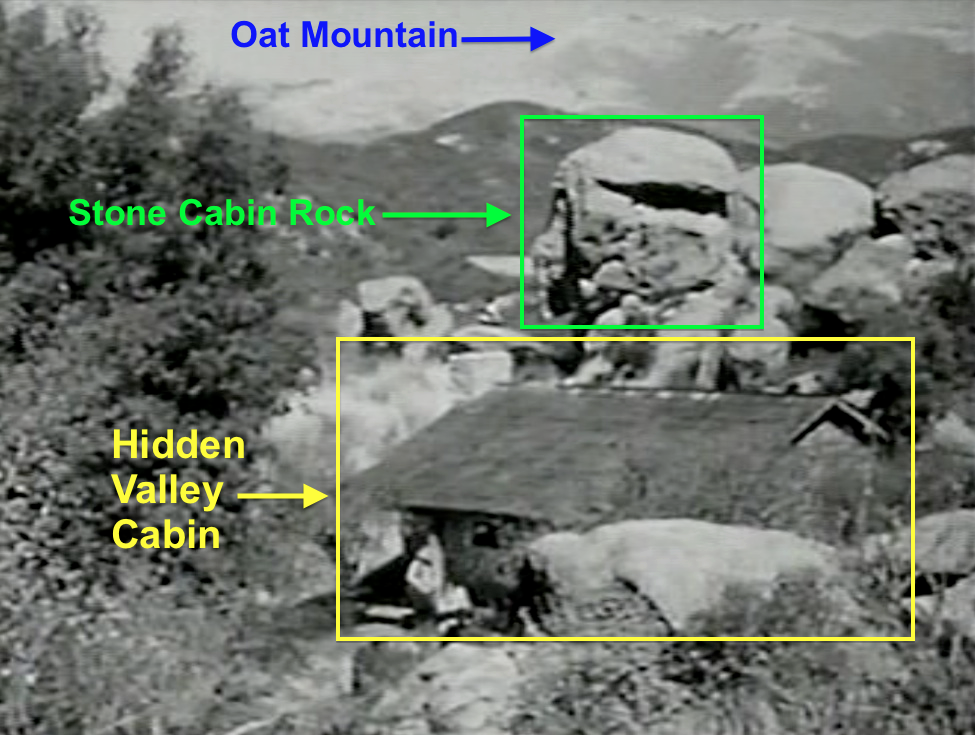 The distinctive rock towering above the cabin, which helps pinpoint the structure's location, has been called Stone Cabin Rock. In this version of the "Prairie Outlaws" screen shot, Stone Cabin Rock is identified, as is the ubiquitous background feature Oat Mountain — along with Hidden Valley Cabin, or Stone Cabin, in the foreground. 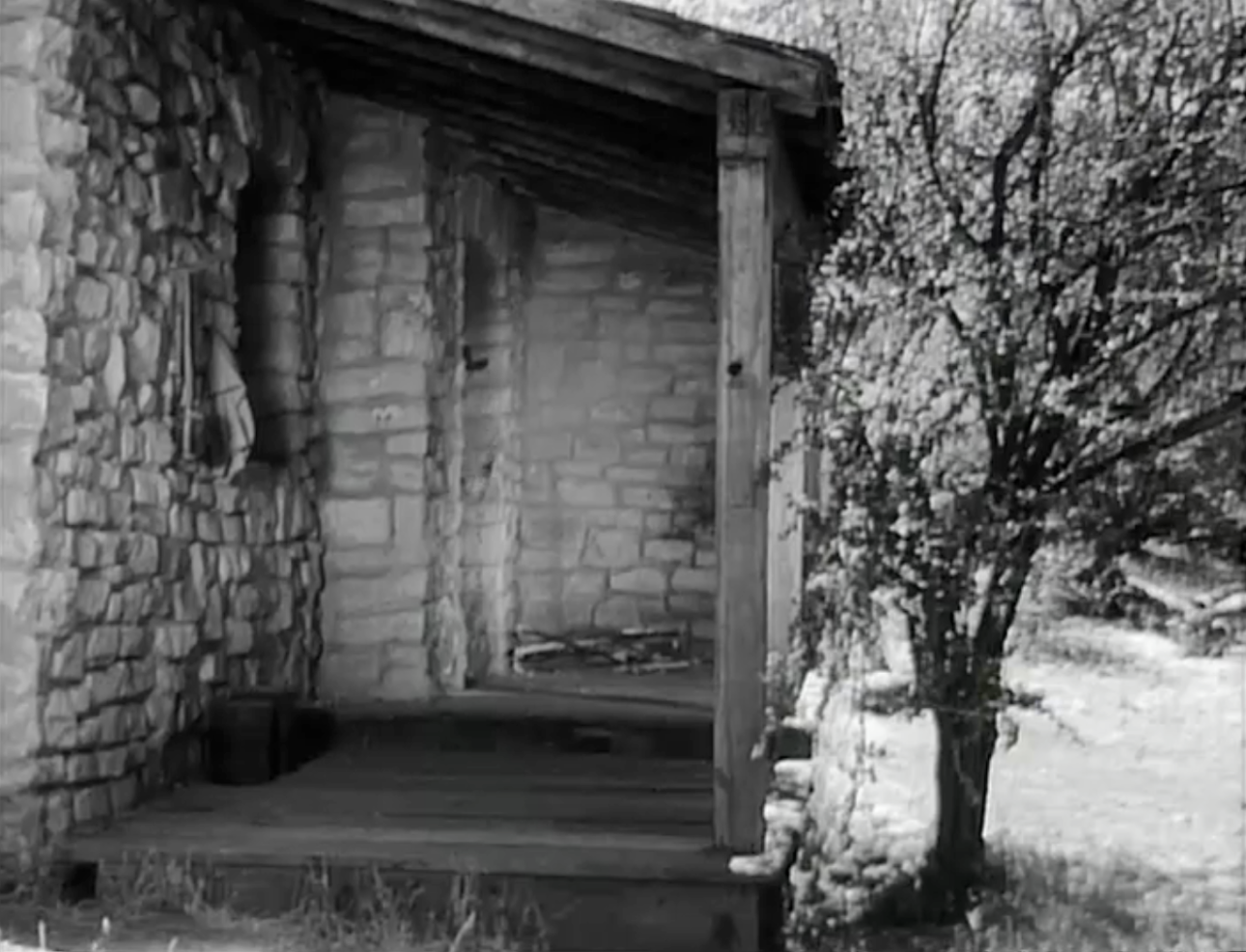 This shot from the Lash LaRue B-Western "Cheyenne Takes Over" gives a good look at the porch of the cabin. The term "Stone Cabin" is a reference to its appearance, not its construction. Being a movie cabin, it would have been built as inexpensively as possible. The outer surface was made to look like stones, but was presumably made up of some kind of facing material — in other words, "movie magic." 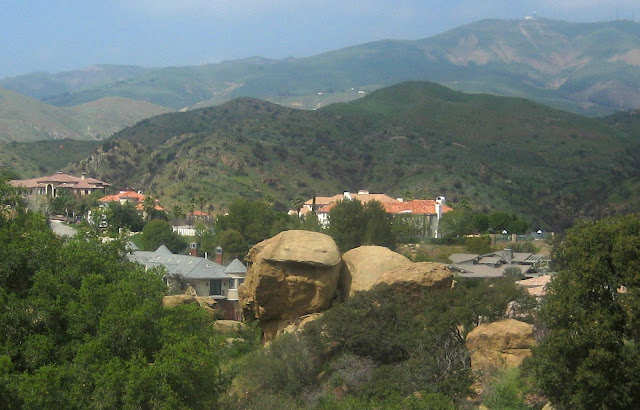 The cabin is long gone, and this shot of Stone Cabin Rock and its surroundings from a recent visit shows some of the mansions that now occupy much of what used to be the Upper Iverson Movie Ranch. The rock's name, Stone Cabin Rock, commemorates that the distinctive feature clearly marks the spot where the cabin previously stood. Also visible in these photos, in the distance, is Oat Mountain, and in the recent shot, as noted above, microwave towers and related gear can be seen at top right. (You may want to click on the photo to enlarge it to get a better look.) Back in the Cold War years of the 1950s and 1960s a Nike missile base, part of the national defense system, was situated where the microwave towers now stand. I believe the small rectangular white building visible in the smaller blue box on the left was a part of the missile base. 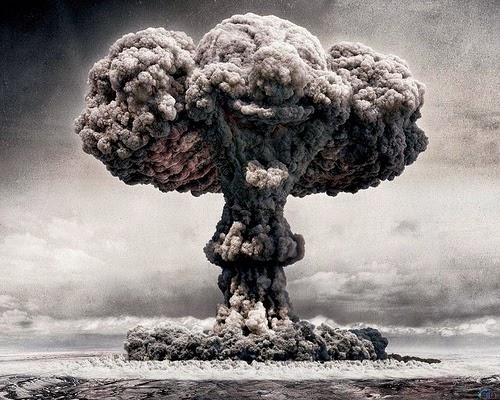 I've blogged about the Nike base before, in an entry I wrote about the Cold War movie "Panic in Year Zero," which you can read by clicking here. That post includes a shot of the missile base that snuck into the background of the movie, which was released in 1962 at the peak of the nuclear scare. 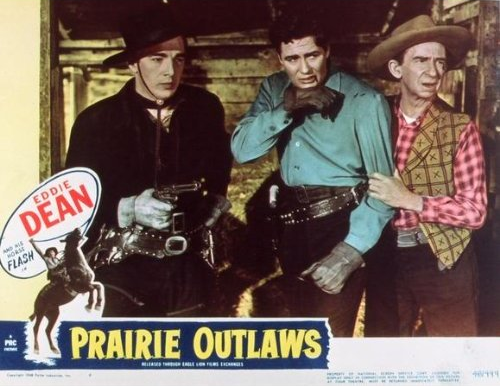 "Prairie Outlaws," made by Producers Releasing Corp., has an interesting backstory. It was an edited version of a movie the company made two years earlier, "Wild West," with additional footage shot for the new movie even though the new movie wound up being shorter than the original. 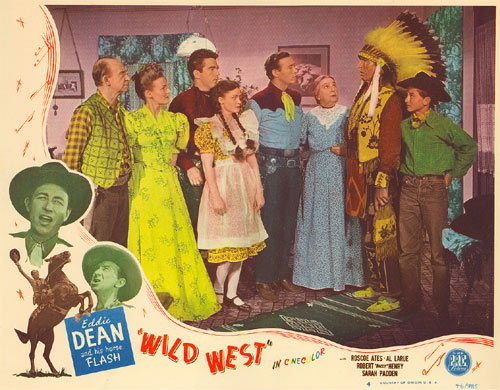 The earlier production, "Wild West," was out of character for a notoriously cheap B-movie studio such as PRC: It was in color, for one thing, and at 73 minutes, longer than typical B-movie fare. It also had two cowboy stars instead of the usual one, featuring both Eddie Dean and Lash LaRue. And it had a dual love story AND a story about a heroic young boy. 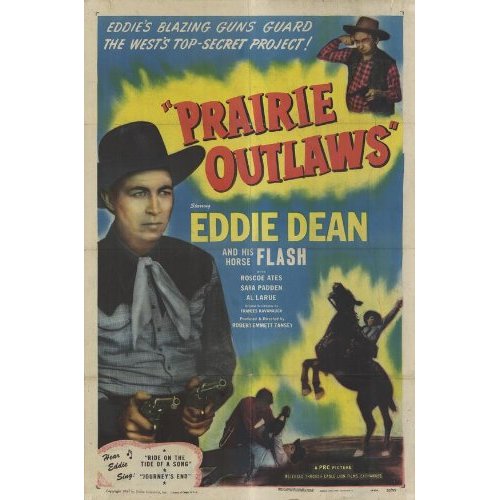 When PRC reinvented the movie two years later as "Prairie Outlaws," the company was clearly targeting the Saturday matinee market, especially young boys. Much of the "mushy stuff" was cut out, but the plot line about the heroic kid was left in. Even with the movie shortened now to about 56 minutes, a batch of new footage was added — mostly action — at the opening of the movie. The number of songs was cut back, and this time the movie was released in black and white. 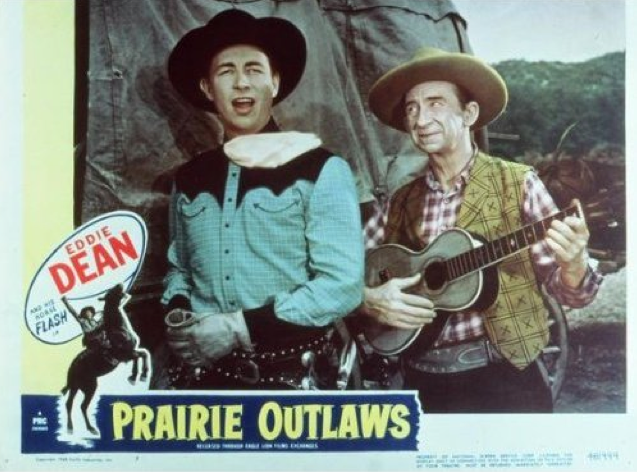 The outdoor action in the original movie, "Wild West," was shot entirely at Corriganville. But in the two years that had passed before "Prairie Outlaws" was pieced together, PRC had shifted its focus to Iverson, and that's where the new footage was filmed — including a big shootout at Hidden Valley Cabin. 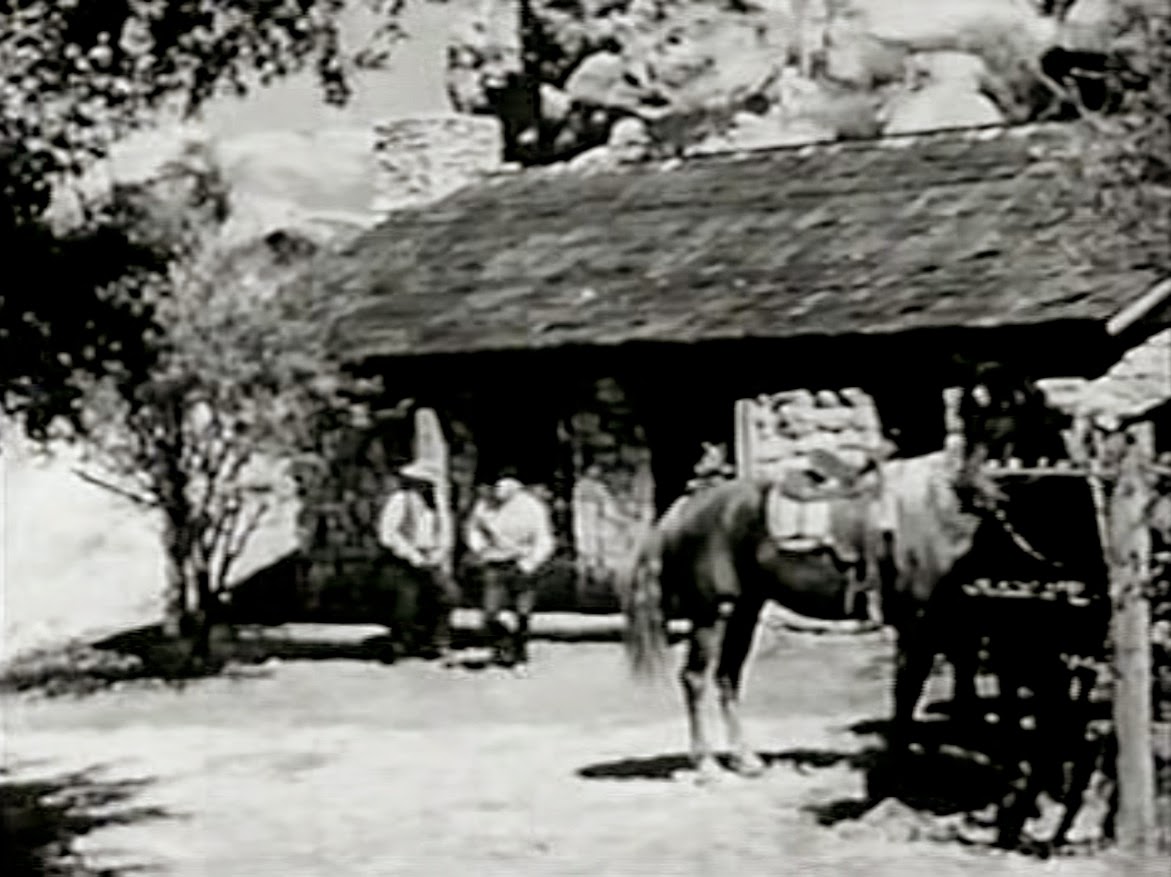 Many film historians believe Iverson's Gorge Cabin, which first appeared in 1936 and was located on the Lower Iverson, was taken apart and reassembled on the Upper Iverson, becoming what we now know as Hidden Valley Cabin. The move would have taken place in about 1944, as that's when the Gorge Cabin disappears from film footage of the Gorge. 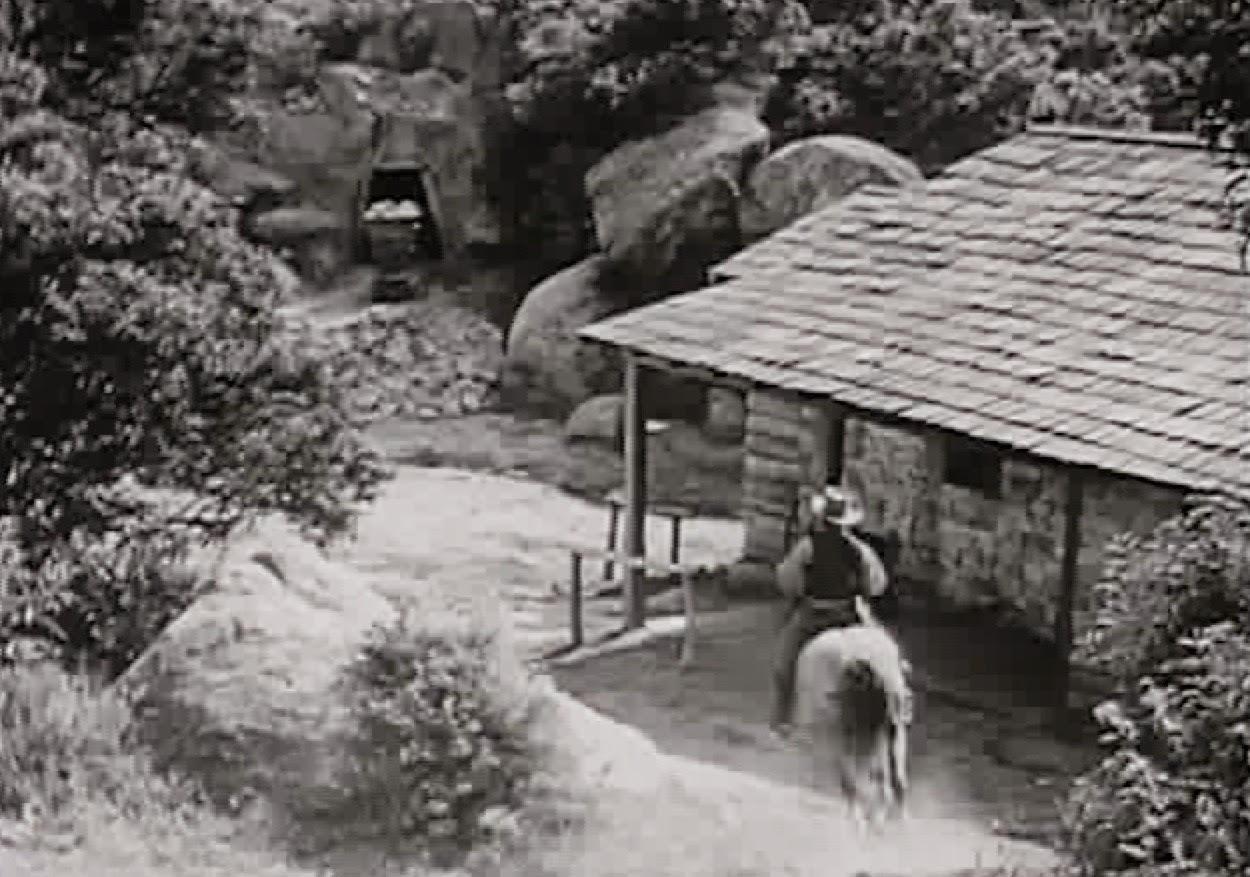 "Adventures of Red Ryder" (1940): Gorge Cabin, on the Lower Iverson

The above shot shows the earlier cabin, located in the Iverson Gorge on the Lower Iverson. I have yet to find a "smoking gun" image of one or the other cabin that confirms whether they're the same cabin, but so far, I would have to say I still need some convincing. Even so, I have to admit the two cabins are pretty similar.