Who can forget (try as we might ...) the Village People album "Cruisin'" — the album that contained the classic "Y.M.C.A." But did you remember the cover shoot at Vasquez Rocks — one of the quintessential filming locations from the heyday of the B-Western? 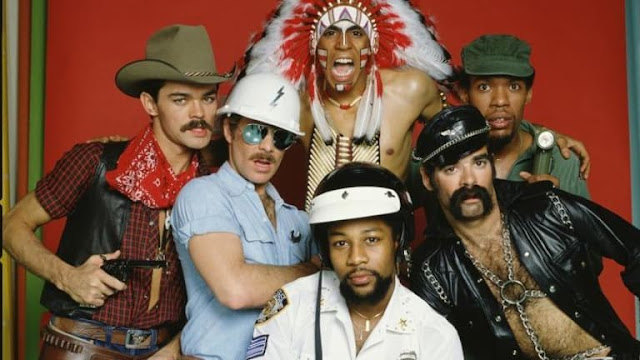 The connection between the Western movies and the Village People's disco music may not be as big a stretch as it seems at first. The group did have both a cowboy and an Indian in the lineup — along with a construction worker, a cop, a leather dude and a G.I.

Wait till you get a load of this ... Play the video, seriously. It might be the best thing you see all day.

Among the highlights in the above video, art director Chris Whorf explains, sort of, why they shot the cover at Vasquez Rocks — and the cowboy, Indian and other members of the Village People even have a go at it!

(Video viewable in selected regions ... we can only hope your region has been selected!)

Here's the "Y.M.C.A." video — but if you're hoping to see more Vasquez Rocks, don't suffer through it (assuming it might be suffering for some of my blog readers, as it is for me). The rocks are not in this one!
Posted by Swami Nano at 7:03 PM No comments: