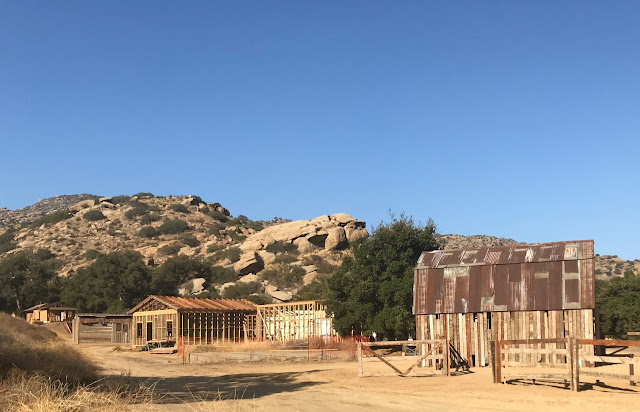 Big things have been happening at Corriganville over the past several weeks, and we're starting to put together a picture of what's going on over there. 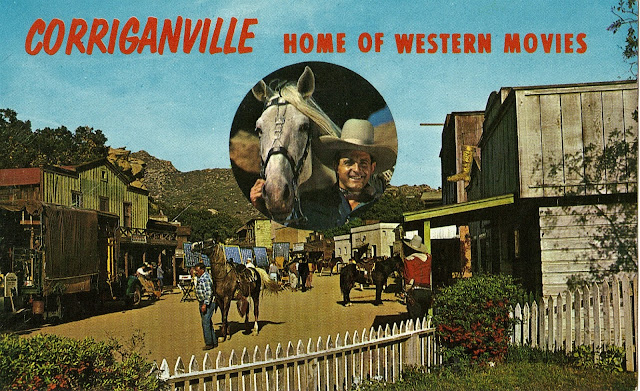 Many readers of this blog are already familiar with Corriganville, a former movie ranch and Wild West tourist attraction tucked away in the southeast corner of Simi Valley, just a few miles west of the Iverson Ranch. 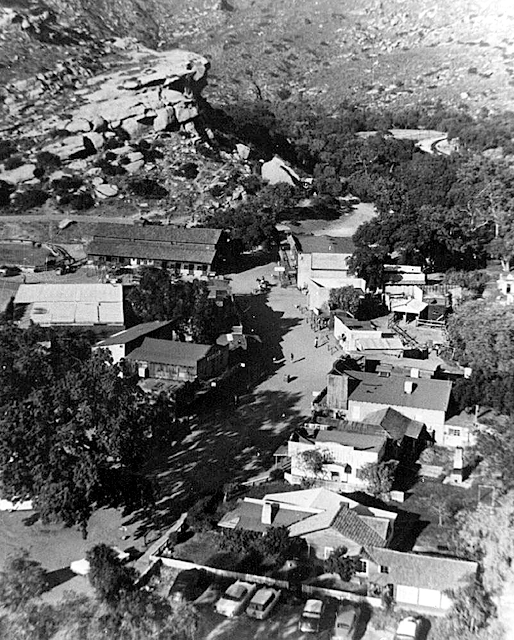 Corriganville's Silvertown in its 1950s heyday

Founded in 1937 by stuntman and B-movie cowboy star Ray "Crash" Corrigan, Corriganville became one of the most important filming locations of the B-Western and early TV Western era — a neighbor and friendly competitor to the Iverson Movie Ranch. 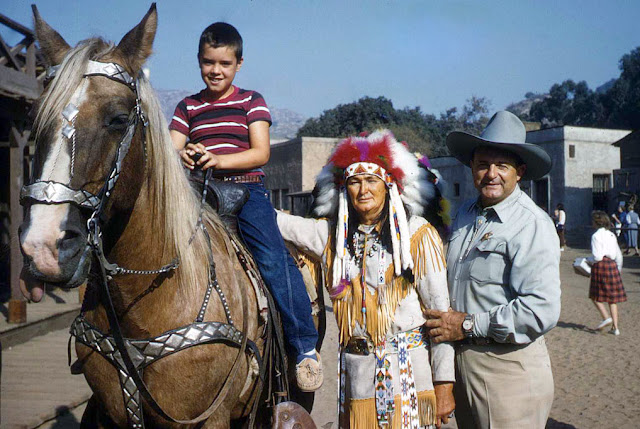 Back in the '50s and early '60s, Corriganville was also a terrific place to visit — especially for young kids. 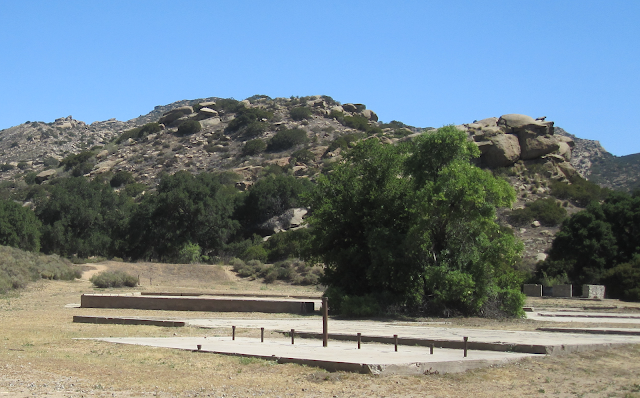 Foundations of what was once Silvertown (2013)

Almost nothing is left of the original Corriganville — mainly just a few foundations of what was once "Silvertown," the Wild West movie town that was the heart of both the theme park and the movie operation. 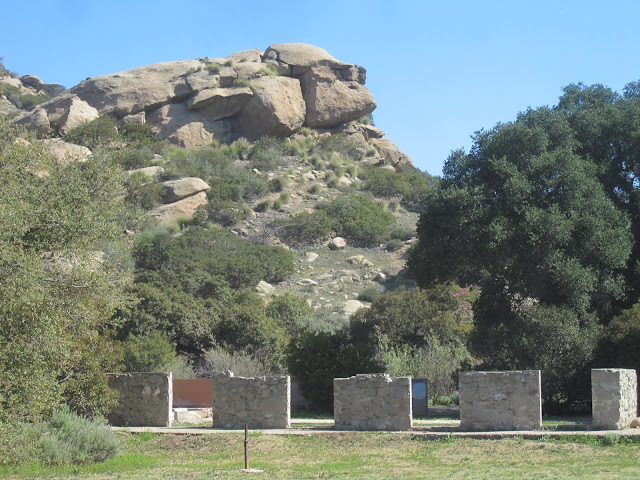 Foundation of Corriganville's "Barn No. 2," below Gorilla Rock

One of Corriganville's biggest attractions in recent years has been the remaining stone walls of what was once "Barn No. 2," at the northeast end of Silvertown. 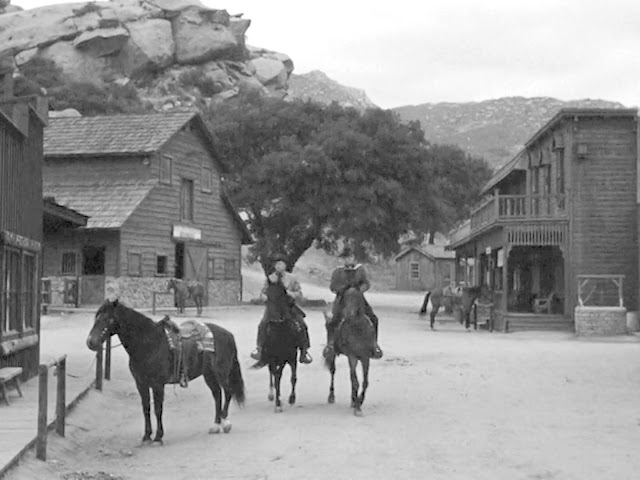 This is what Barn No. 2, also known as the "new barn," looked like back in the filming days. That's it on the left. 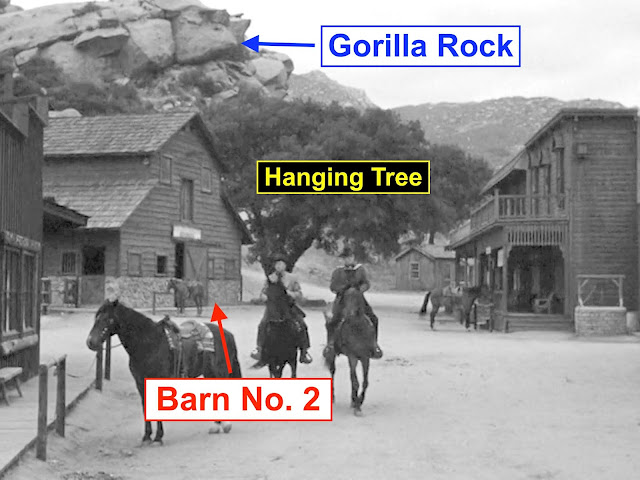 The stone portion of the barn's walls, which still survives, can be seen at the base of the building. You might also recognize Gorilla Rock from some of the recent photos. 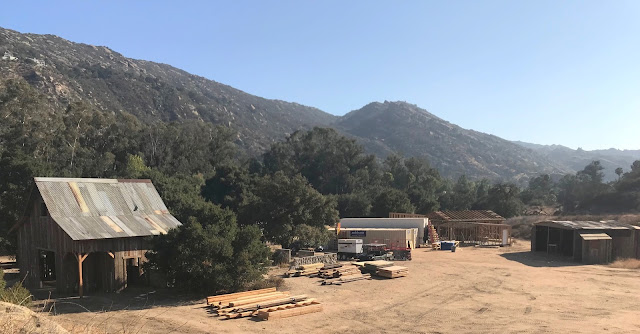 The stone walls are still there, but they have some new neighbors as of this summer. To get a better look at the walls, click on the above picture, which should bring up a much larger version of the photo. 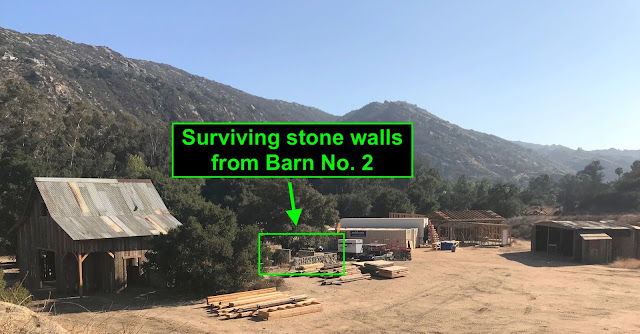 I haven't personally confirmed it, but the new buildings are believed to be a set for the upcoming Quentin Tarantino movie "Once Upon a Time in Hollywood," with a story that takes place around the Manson murders. 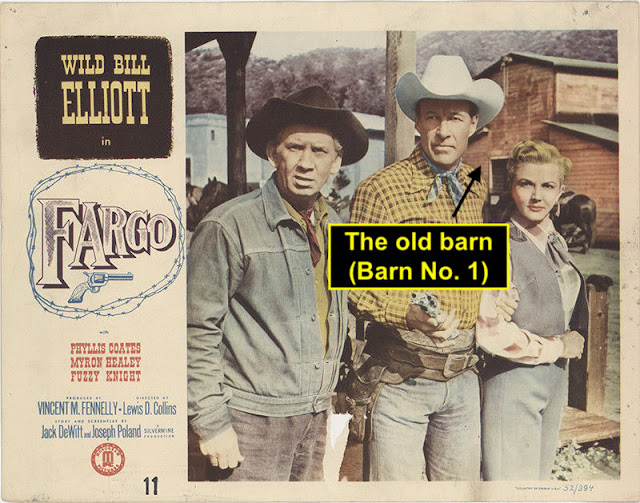 With all this talk about the "new barn," or Barn No. 2, I suppose we should take a moment to acknowledge Barn No. 1, otherwise known as (wait for it) the "old barn." That's it at the other end of Silvertown. 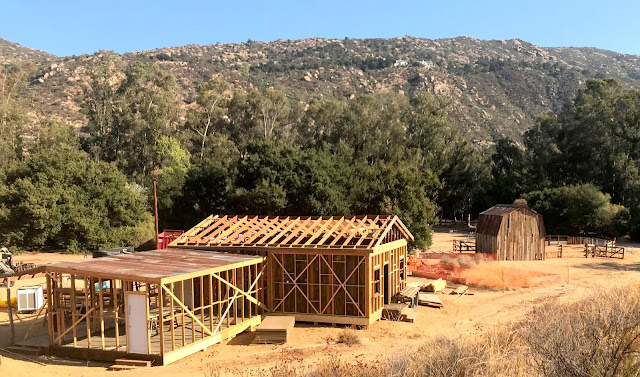 Photos of the recent construction at Corriganville come from fellow location historian Cliff Roberts, who has been keeping tabs on the project as it has taken shape over the past few weeks. 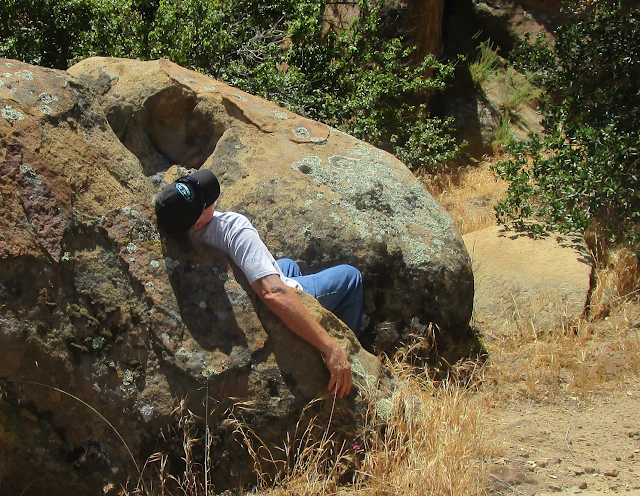 Cliff Roberts slacking off on a recent Iverson Ranch expedition

You might remember Cliff from this recent post about Dinosaur Claw and the Totem Rocks on the Upper Iverson. 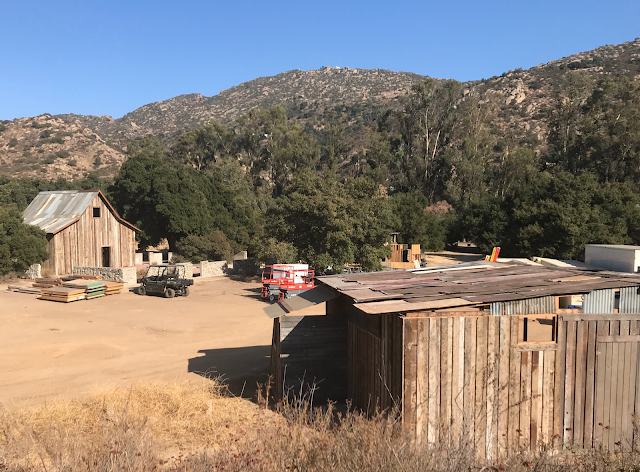 This shot from Cliff again features the surviving stone wall from Barn No. 2. 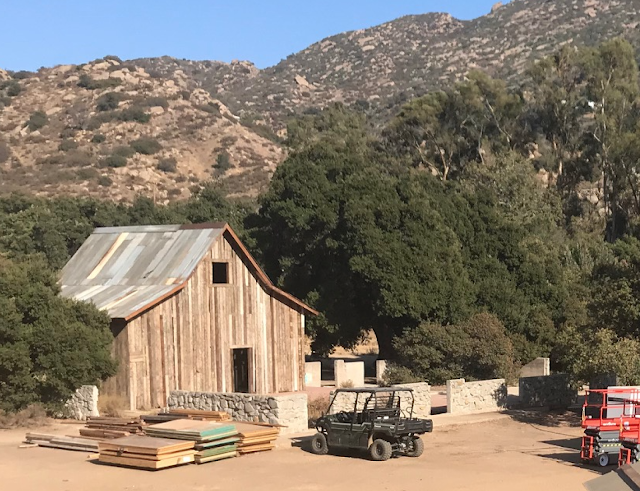 The old stone wall — now a part of the new construction

Zooming in on the shot we get a better look at how the old wall appears to be incorporated into construction of a new barn — should we be getting used to the idea of a "Barn No. 3"? 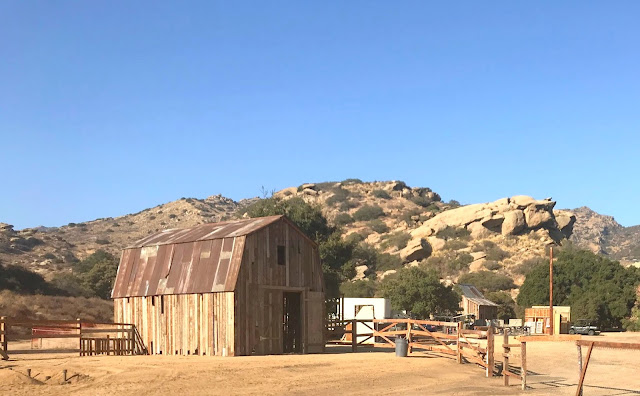 While we're at it, we may also want to add "Barn No. 4" to the discussion. 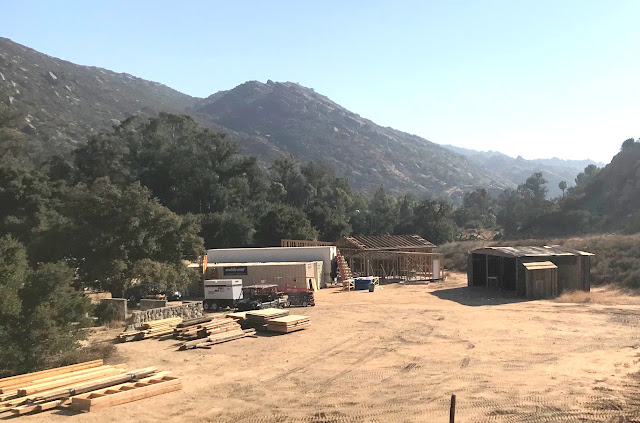 That discussion is more than rhetorical. One of the tantalizing rumors flying around is that the new buildings will be left in place after filming is completed on the Tarantino movie. 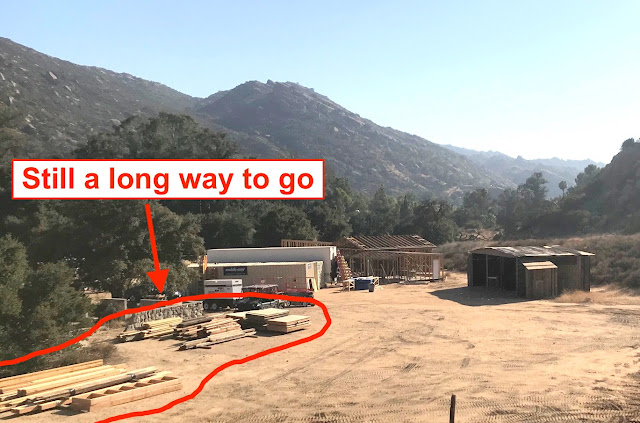 As unlikely as it sounds, there's a chance we will in fact end up with a new Silvertown. And based on the supply of building material waiting to be pounded into place, there's plenty of work yet to be done. 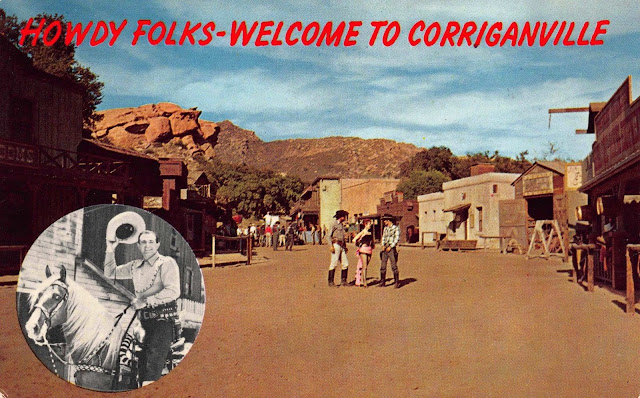 It may be too soon to start getting excited about the prospect of Corriganville coming back to life, but it's an intriguing possibility. Stay tuned — I'll be posting updates here as the story develops.
Posted by Swami Nano at 10:36 AM 10 comments: