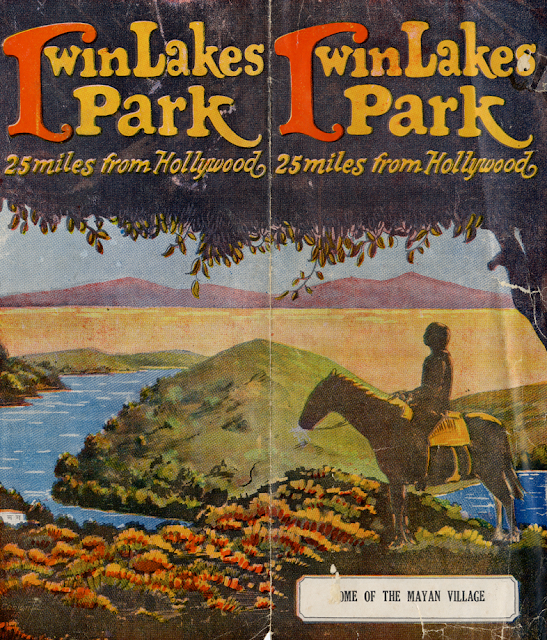 Twin Lakes Park was a 1920s-era development in the hills above the northwest San Fernando Valley that was known for its Mayan and Aztec-style architecture and its two lakes — created by damming Chatsworth's Devils Creek and Browns Creek. 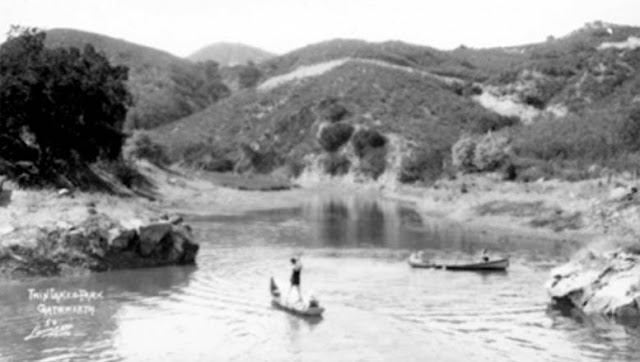 Twin Lakes Park disappeared decades ago, although its legacy survives in the form of a few artifacts — including the remnants of the two original dams; some old deteriorated strips of asphalt that used to be Mayan Drive, one of the main access roads to the park; and a current residential area known by the name Twin Lakes, located just above the 118 Freeway east of Topanga, near the original Twin Lakes. 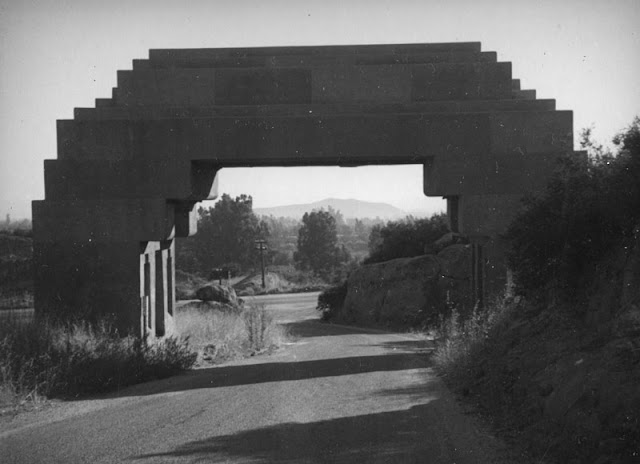 One thing that no longer exists is the massive Mayan-style gate that marked one of the main entrances to Twin Lakes — straddling Mayan Drive just above Santa Susana Pass Road, a short distance west of Topanga. 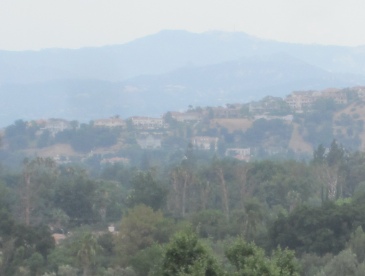 You may or may not see the similarity in the shape of the background hills in the above two shots, but the second shot is my attempt to re-create the view through the Twin Lakes Park Gate, as seen in the old shot of the gate. I wasn't able to duplicate the angle exactly. 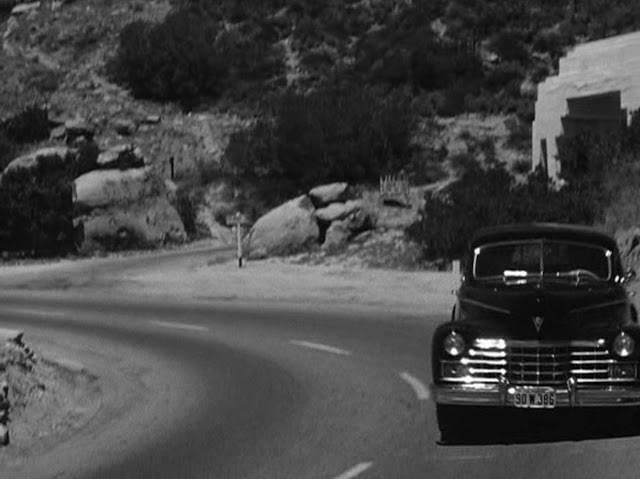 Twin Lakes Park's Mayan Gate made a fleeting appearance in the James Cagney film noir "White Heat," as seen in the above screen shot. As far as I've been able to determine, no one has previously identified the structure seen in this movie as the gate to Twin Lakes Park. The gate appears suddenly and is on screen only briefly, showing up during a sequence focused on a speeding car. The portion of the gate seen above, at the right of the shot, is all we see of it in the movie. Directed by Raoul Walsh, the movie is widely considered to be one of Cagney's best, and includes his iconic line, "Made it, Ma — top of the world!" 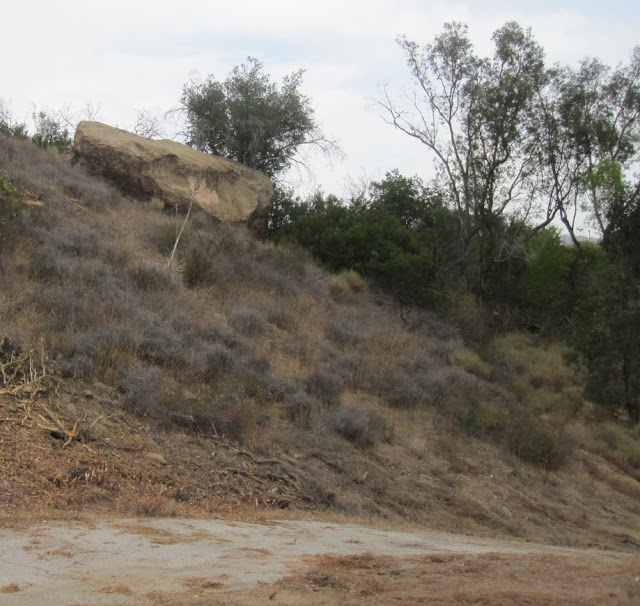 The site of the Mayan Gate today

The location of the Mayan Gate was immediately to the east of what is generally thought of as the southeast corner of the Iverson Ranch. The gate may in fact have been situated on property that at one time or other was a part of the ranch. The land shares the topography of Iverson, including its distinctive sandstone boulders. One of those boulders, seen in the above photo, remains at the site today and helps pinpoint where the gate was located. A little bit of the remains of Mayan Drive can also be seen in the above shot. 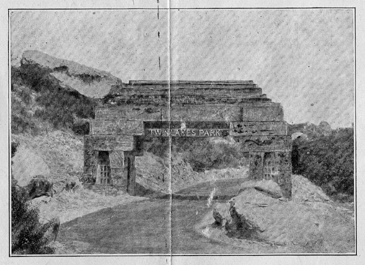 Here's a poor-resolution photo from the old promotional brochure for Twin Lakes, showing the gate holding a sign reading "Twin Lakes Park." One of the most important details in this shot is the boulder just above and to the left of the gate — the same boulder found at the site today and seen in the photo above this one. The big rocks in front of the gate — seen here and in the "White Heat" shot above — no longer exist, having been removed when Santa Susana Pass Road was built through to Topanga.

Click here to see a previous blog entry about James Cagney's connection to the Iverson Movie Ranch — including Cagney Rock, which can still be found at the site today.


If you're interested in buying "White Heat," the links above will take you to Amazon listings for DVD and Blu-ray editions of the movie.

Moses brings the Ten Commandments to the suburbs 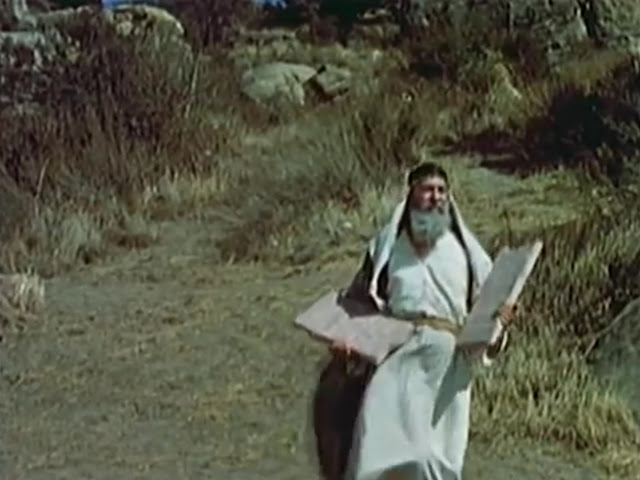 The above screen shot comes from the 1958 Bible series "The Old Testament Scriptures," from Concordia and Family Films. In this shot Moses, played by Thayer Roberts, descends from Mount Sinai with the Tablets of Stone — bringing them to the Iverson Movie Ranch, as it turns out. Directed by Eddie Dew, the production is one of a number of Bible movies filmed at Iverson during the 1950s. 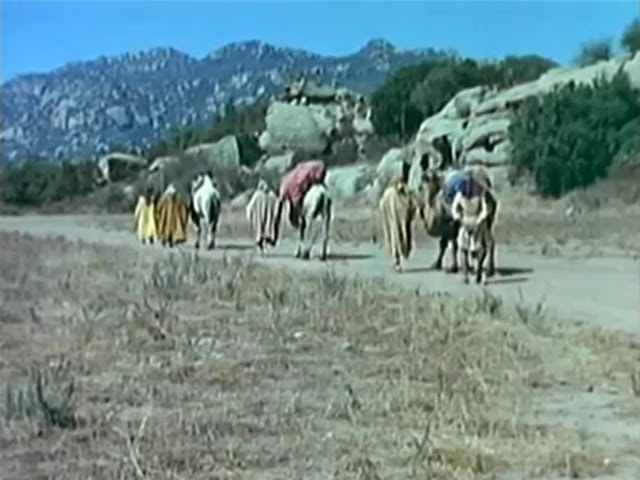 Most of the location shots for "The Old Testament Scriptures" were filmed on the Upper Iverson — including the above sequence in which three camels and their handlers traversed the North Rim area. The rocks featured in this shot, referred to by some film historians as either Rocks Across the Way or the Festival Rocks, remain in place today, though they're now surrounded by residential estates. Also seen here are the distinctive hills to the west of Chatsworth, Calif., part of the Santa Susana Mountains. 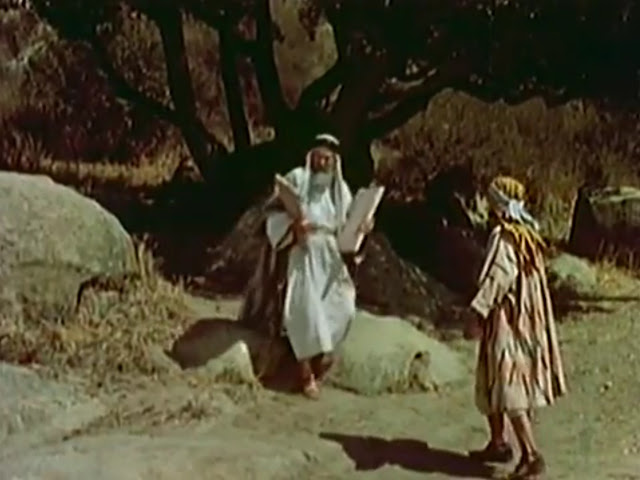 The Tablets — sometimes called the Tablets of Law or Tablets of Testimony — contained the Ten Commandments, and two separate sets were made. At least, that's the version of Bible events told by this production. In the above shot, also filmed at Iverson, Moses admires the first set of Tablets shortly before smashing them in a fit of rage. 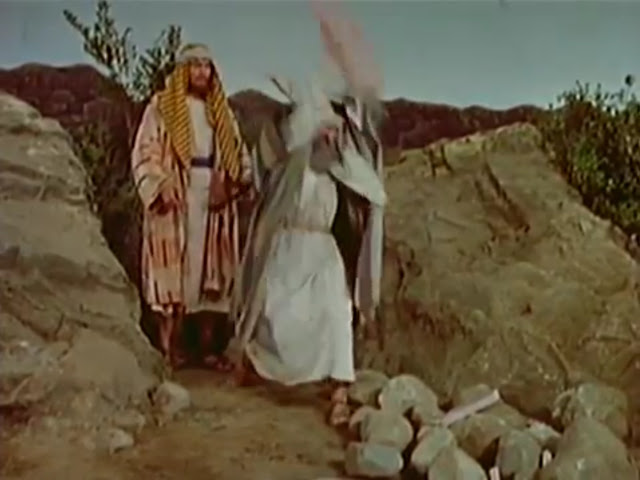 In the studio, Moses smashes the first set of Tablets —
this meant that a second set had to be made

Even though the production went on location to Iverson for a few key shots, the bulk of it is staged in the studio, including some obviously fake depictions of the "outdoors" — fake sky, fake rocks, obvious studio lighting, painted backdrops, etc. The above example shows Moses smashing the first set of Tablets, surrounded by fake rocks. 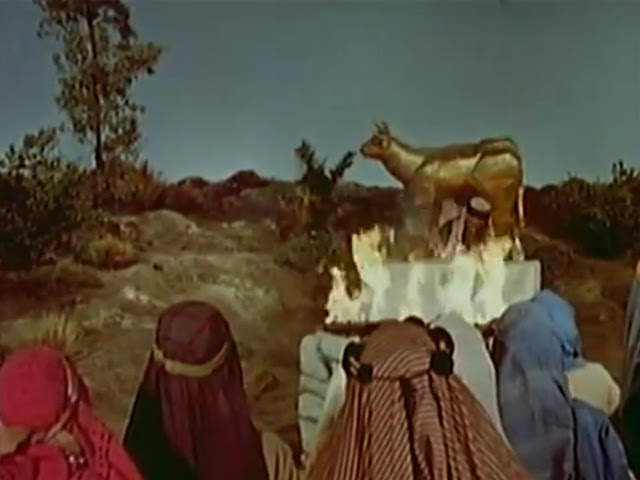 Moses about to topple the Golden Calf — another studio shot

The reason for Moses' fit of rage: He walked in on the Children of Israel in the act of worshiping the Golden Calf. It's all presented quite literally in the production, and in the above shot — filmed in the studio — Moses, with his head visible just below the belly of the Calf, takes it upon himself to topple the idol. This shot has a more believable background than some of the others in the production, but a close examination verifies that it's all fake. 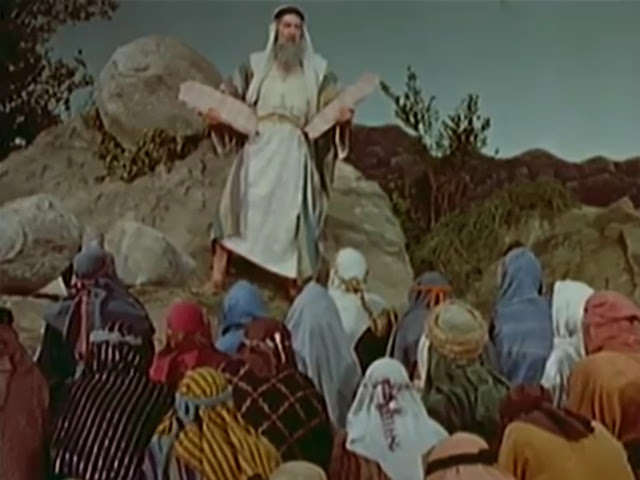 The scene at the top of this post depicts Moses bringing the second set of Tablets. In this follow-up shot, he presents the Tablets, and the Commandments, to the faithful — but now he's back in the studio, and again surrounded by fake rocks. In terms of overall production values, well, let's just say Cecil B. DeMille has nothing to worry about from these folks.

Here are a few of the videos:

"Joseph: The Young Man" (This episode includes the camels):

"Moses: Called by God" (includes a brief shot of the Iverson rock known as Tamale, about halfway through the episode):

"Moses: Leader of God's People" (includes the bringing of the Tablets and the toppling of the Golden Calf):

Another interesting Bible production from the 1950s, which I've written about previously, marked the first screen credit for actor James Dean, who appeared as John the Apostle. That production featured a re-creation of the tomb of Jesus on the Lower Iverson. You can see that blog entry by clicking here.
Posted by Swami Nano at 2:59 PM No comments: