Remarkable shots of a partially dismantled — and flooded — Iverson Western street in 1956, as seen in the TV show "Whirlybirds" 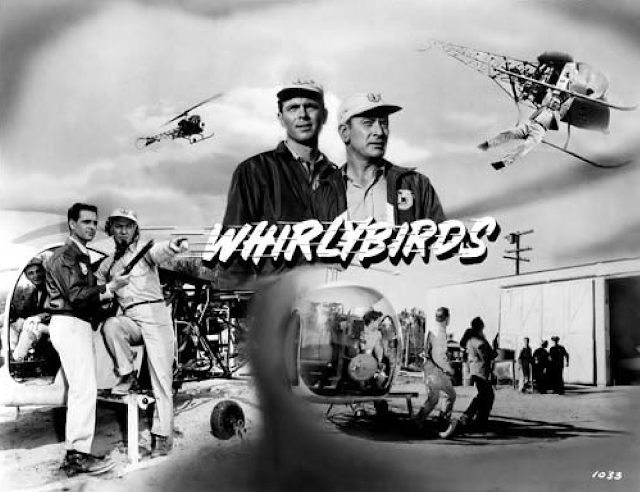 The late-1950s show "Whirlybirds" has been a personal favorite since I watched it on TV as a kid. In those days, the idea of flying around in a helicopter having adventures was a pretty big deal. 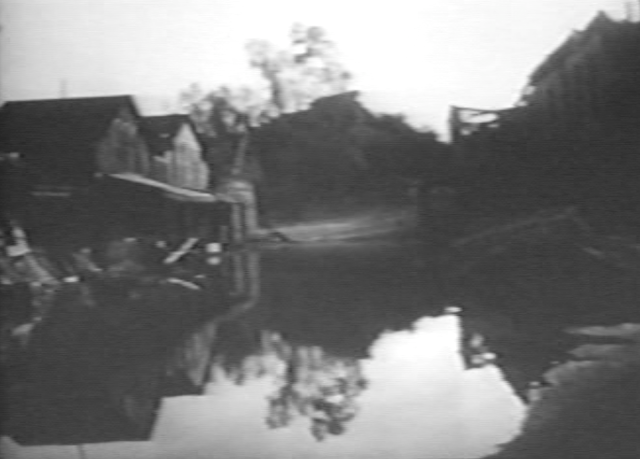 Now that I'm grown up, I love "Whirlybirds" for different reasons — namely its great location shots of the Iverson Movie Ranch. One of the best examples is the episode "Ghost Town Flight," shot in late 1956. Even in somewhat diminished picture quality, the episode provides clues to the final days of Iverson's Western street. 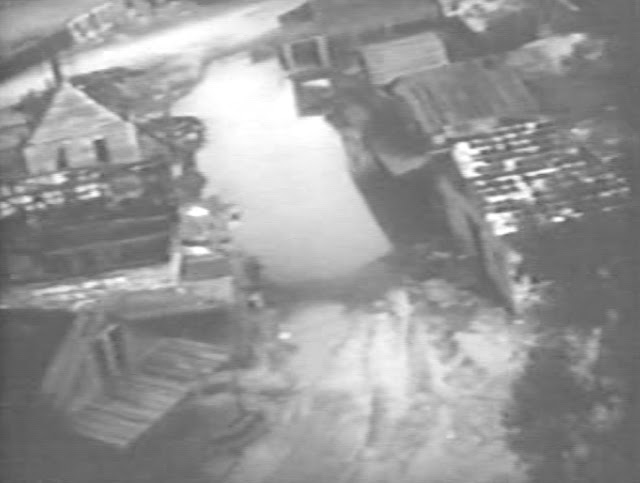 The Iverson Movie Ranch Western street, flooded and in decline, in 1956

The Western street — or what was left of it in late 1956 — is seen in a partial state of teardown in the episode. The prominent building on the left, with the steep sloped roof, is the Hotel, which apparently outlasted some of the other buildings in town, albeit in deteriorated condition. 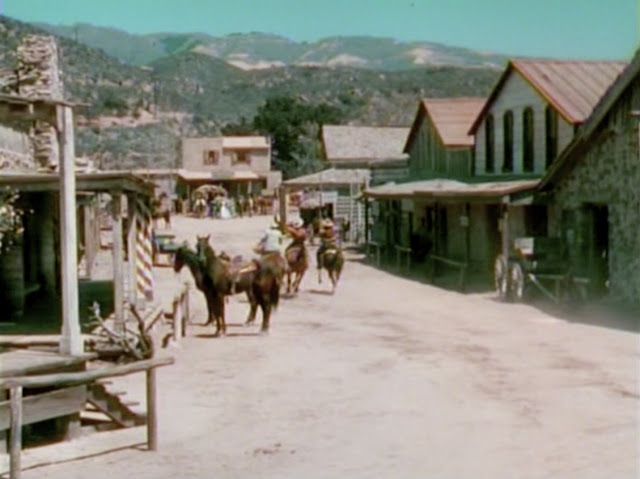 This is what the town looked like in better days. Built by Gary Cooper for the 1945 movie "Along Came Jones," the town became known alternately as El Paso Street (for its appearance in the 1949 movie "El Paso"), Iverson Village or simply Iverson's Western street. Take a look at the row of buildings along the right side and compare them with the photo below, from "Whirlybirds," shot about six years later. The town flooded regularly during the 12 years or so that it stood, but the flooding was only caught on film a few times. This shot — probably taken from a helicopter — focuses on the buildings along the east side of the street, where the decay is evident on roofs and other features. The building at the right, with its four vertical windows, is among the most instantly recognizable structures in town. 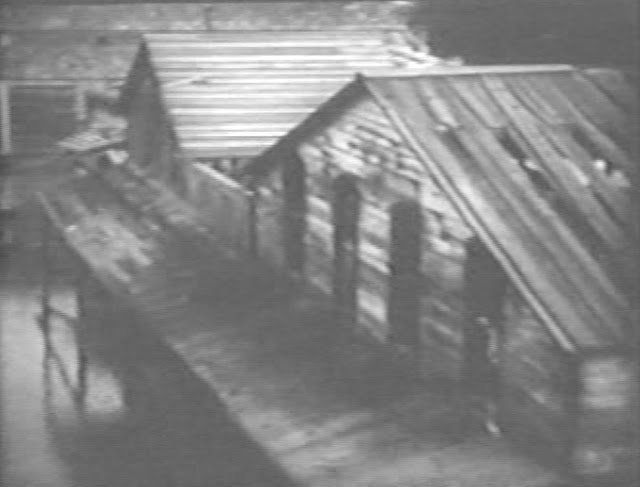 Here's a slightly closer view of the same general area from the "Whirlybirds" sequence. This shot provides an even better look at the deterioration of some of the roofs and exterior walls. 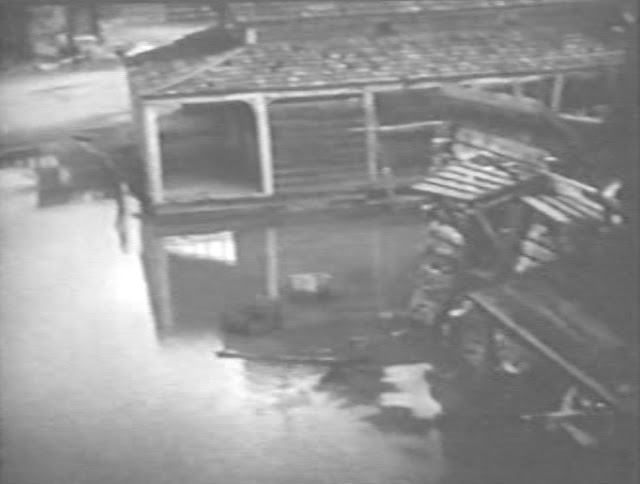 At the top of the frame is the General Store, which was located near the north end of the street. After appearing as a general store in "Along Came Jones" in 1945, the building had many incarnations over the years, often being converted into a stagecoach stop. At the right of the frame we see what was once the Sheriff's Office — which is now crumbling to the point where it's little more than a pile of lumber. 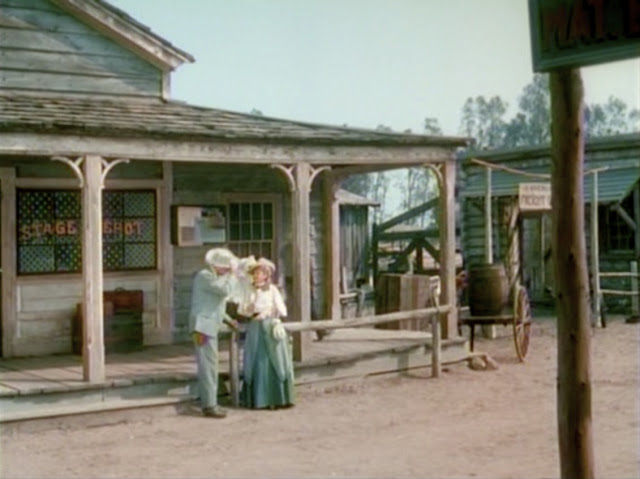 "Calamity Jane and the Texan"

Here's another look at the General Store in better days, when it appeared as the stage depot in 1950 in "Calamity Jane and the Texan." The building at the right of this shot is the same Sheriff's Office building that looks like a "crumbling pile of lumber" in the shot above this one. 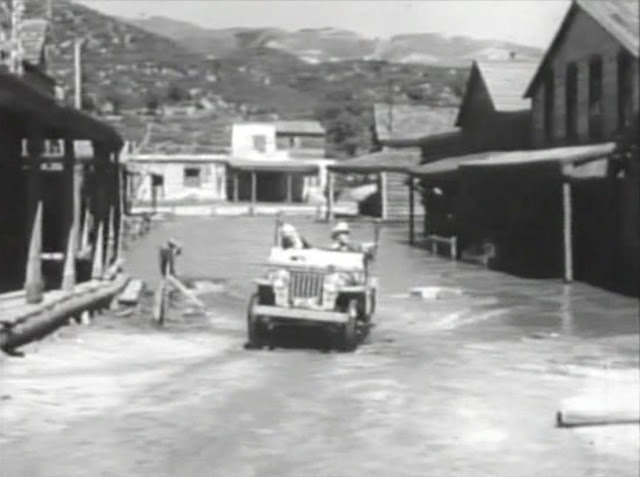 Another example of the flooded town surfaced in "The Roy Rogers Show," in an episode that would have been filmed during the winter of 1951/52. That's Roy Rogers sidekick Pat Brady driving his beloved Jeep, "Nellybelle," through the flood, with the show's co-starring German shepherd, Bullet, in the passenger seat. (You'll have to take my word for it, as it's impossible to make them out in the fuzzy screen shot.) 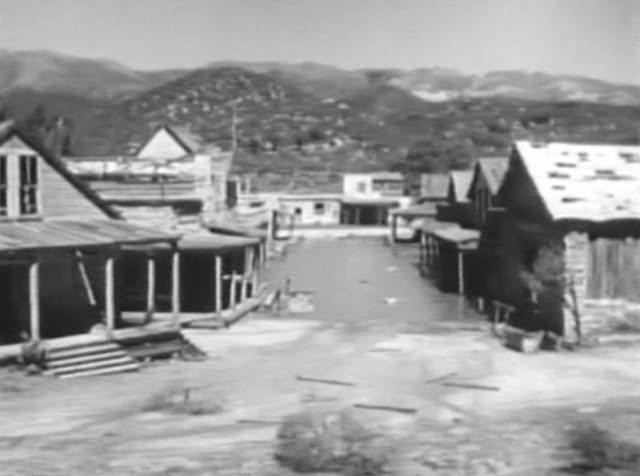 Flooded or not, the Iverson Western street often played a ghost town, especially in its waning years. The town was relatively modest as Western town sets go, and this shot appears to show that deterioration was already evident in early 1952. But the town could be spruced up or dressed down depending on the needs of the production. 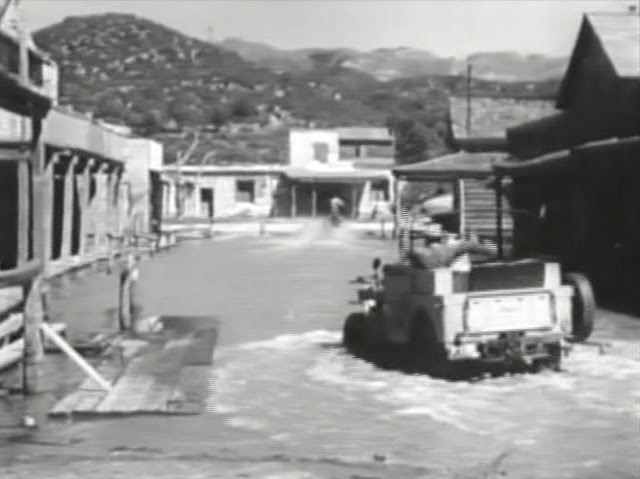 One more shot of Pat Brady and "Nellybelle" on their joy ride through the flooded street. The story that I've heard about this episode is that the crew showed up for what was supposed to be a regular shoot in the town, and when they found it flooded they wrote the flooding into the script. True or not, I like the story.

You can find other posts about the Iverson Western street by clicking here or looking up "Iverson Village" in the long index found at the right of this page.

This eight-episode "Whirlybirds" DVD being sold by Amazon.com is one of precious few "Whirlybirds" sets commercially available — possibly the only one. Luckily, the set includes the remarkable episode "Ghost Town Flight," featured in this post. Click on the icon above to check it out on Amazon.