"Made it, Ma — top of the world" ... or "You dirty, double-crossing rat"? Cagney Rock and the one that got away 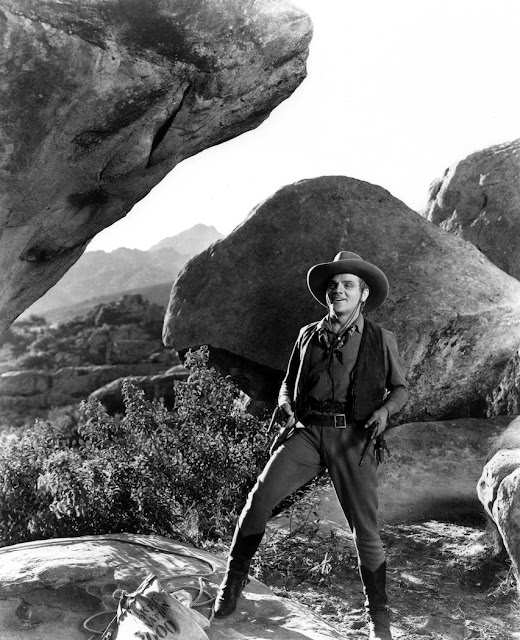 Promotional still for "The Oklahoma Kid" (1939)

The above promo shot for the James Cagney movie "The Oklahoma Kid," featuring Cagney in a rare Western role, comes courtesy of movie location researcher Jerry England. The rock directly behind Cagney's head can still be found at the former Iverson Movie Ranch in Chatsworth, Calif. Unfortunately, the overhanging rock hovering above Cagney no longer exists — it was destroyed around the late 1980s to early 1990s when the Cal West Townhomes development was built. 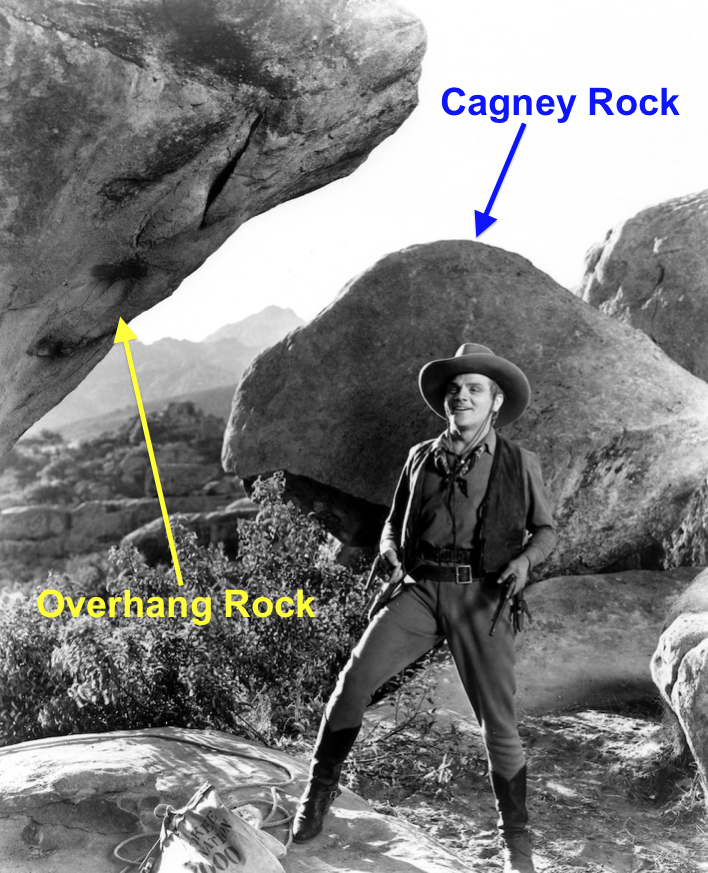 This markup version of the promo still should make it clear which two rocks we're talking about. The overhanging rock has earned the nickname "Overhang Rock," appropriately enough, while I've taken to calling the other one "Cagney Rock." 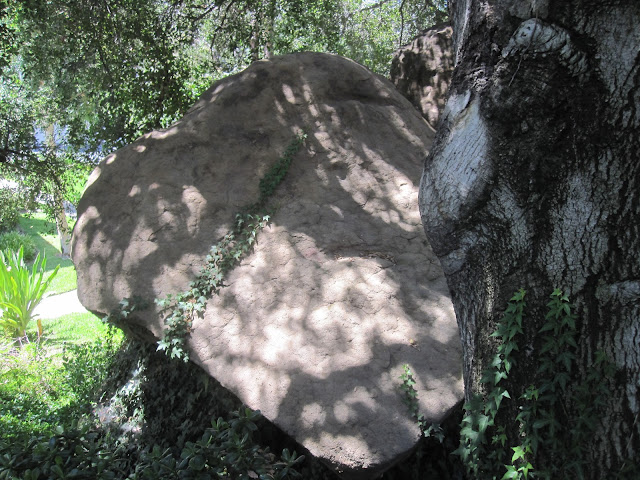 When I recently found that same rock — the one behind Cagney's head — at Iverson it seemed like kind of a big deal so I honored the occasion by naming it Cagney Rock, at least in my own mind. The above shot shows Cagney Rock in its current setting — from as close as it's possible to get to the same angle seen in the promo shot. These days it's part of the landscaping for the condos. It's no longer possible to duplicate the exact angle of the Cagney promo still. 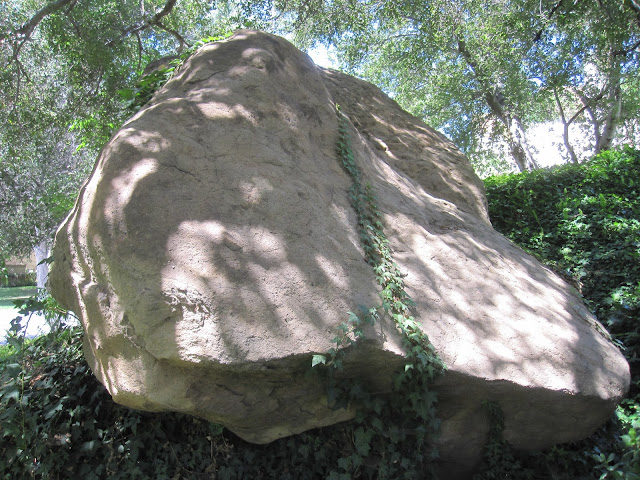 To be honest, it's not a particularly impressive rock in person — this is probably the best shot I could get of it. You might say it dressed up for the occasion with a dashing "fern necktie." The unnamed rock behind it — which will show up better in some of the photos below — is bigger and, I suppose, grander. And neither of them is nearly as spectacular as "the one that got away" — Overhang Rock. But these two both deserve credit for surviving — and Cagney Rock earned some recognition with its featured appearance in the promo shot. 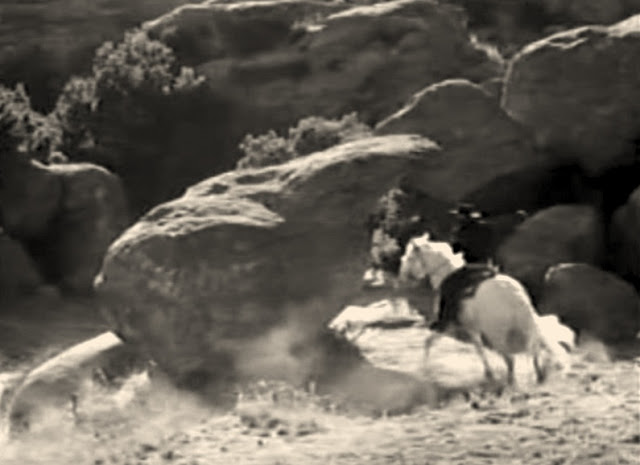 The one that got away: This is another view of the overhanging rock that hovers above James Cagney in the "Oklahoma Kid" promo still at the top. The thing has had a number of nicknames, the most common being Overhang Rock. I've also seen it referred to as Oklahoma Kid Rock, and I heard recently that some film location researchers have been calling it "Justice Rock," after an appearance by the rock in the Johnny Mack Brown B-Western "Oklahoma Justice." In the above shot from the 1946 Durango Kid movie "The Desert Horseman," the rock reminds me of a rooster, possibly missing its head. Anyway, the shot gives some idea of the scale of Overhang Rock, which was clearly taller than a horse and rider. 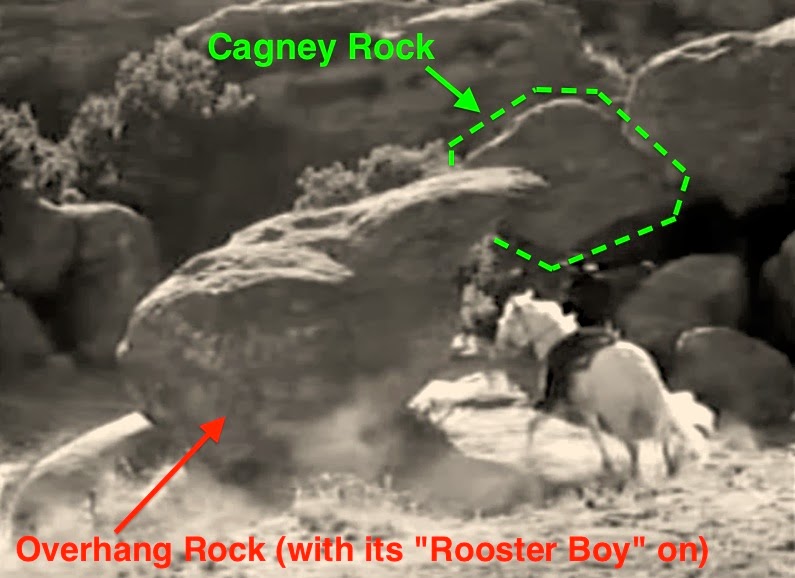 Here you'll see I've marked up a copy of the "Desert Horseman" shot, for no apparent good reason. I did want to make sure readers can positively ID Cagney Rock, and I also will use this opportunity to confess that, early in my Iverson Research — before I learned of Overhang Rock's more proper identities and back when I was still taking a more whimsical approach to rock identities — I gave the rock the unofficial nickname Rooster Boy. 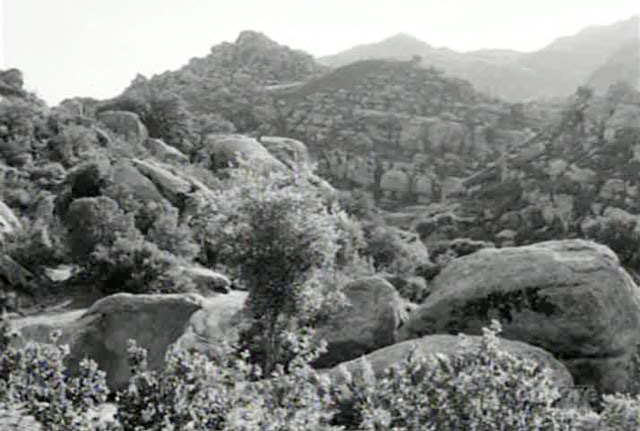 A shot from the Victor Mature Western "Escort West" shows a portion of Overhang Rock, in the bottom left corner, along with its neighbors, including Cagney Rock, partially visible at bottom center, just to the right of the small tree near the center of the photo. (That tree, by the way, may be the same one, much bigger now, that's blocking the view of Cagney Rock these days — as seen above in the third photo of this blog entry.) This shot gives some idea of the view these rocks had of the rocky Iverson Gorge. The peaks seen in the background, near top center, are across Santa Susana Pass Road from Iverson looking south, above Chatsworth Park. 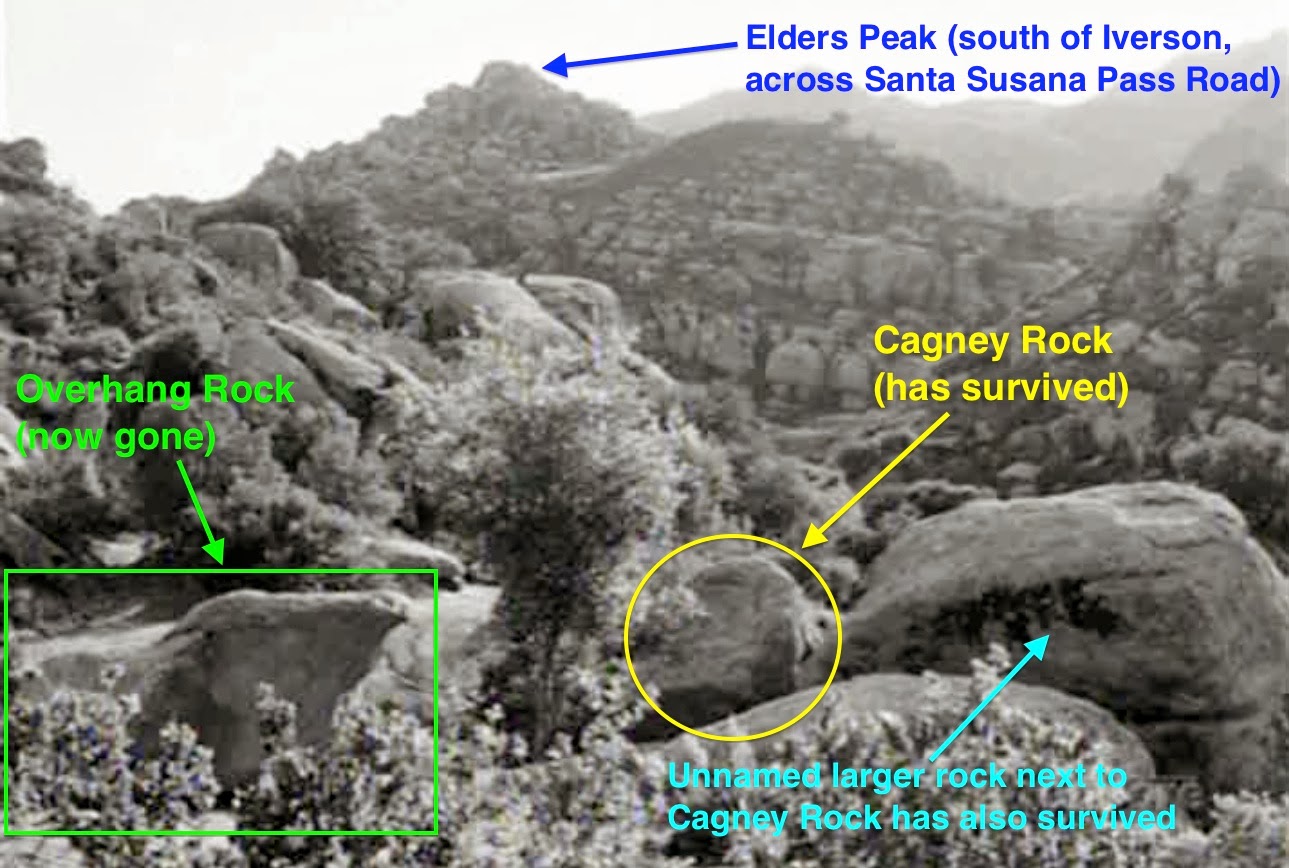 This is that same shot from "Escort West" with some of the key features marked. 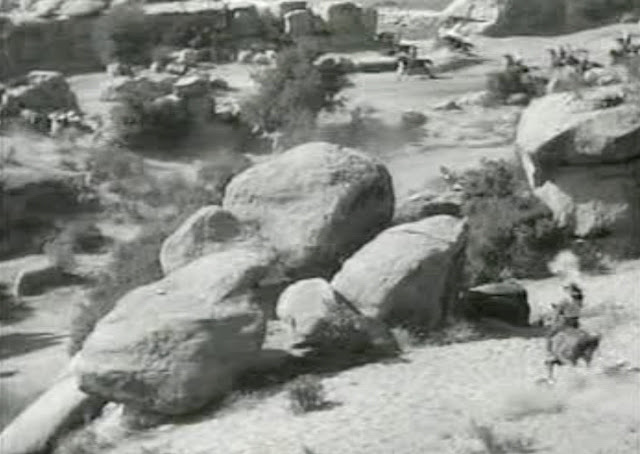 Overhang Rock was the object of some wishin' and hopin' on the part of Iverson researchers for years, until the sad truth became known just within the past year or so: Overhang Rock no longer exists. The discovery of the neighboring rocks — Cagney Rock and the larger rock next to it, with no Overhang Rock to be found — had a lot to do with proving Overhang Rock was gone. This screen shot from the Dick Foran Western "Land Beyond the Law" shows Overhang Rock, near the bottom left corner, with the much smaller Cagney Rock partially visible directly above Overhang Rock. The smaller rocks to the right of Overhang Rock are gone now too. 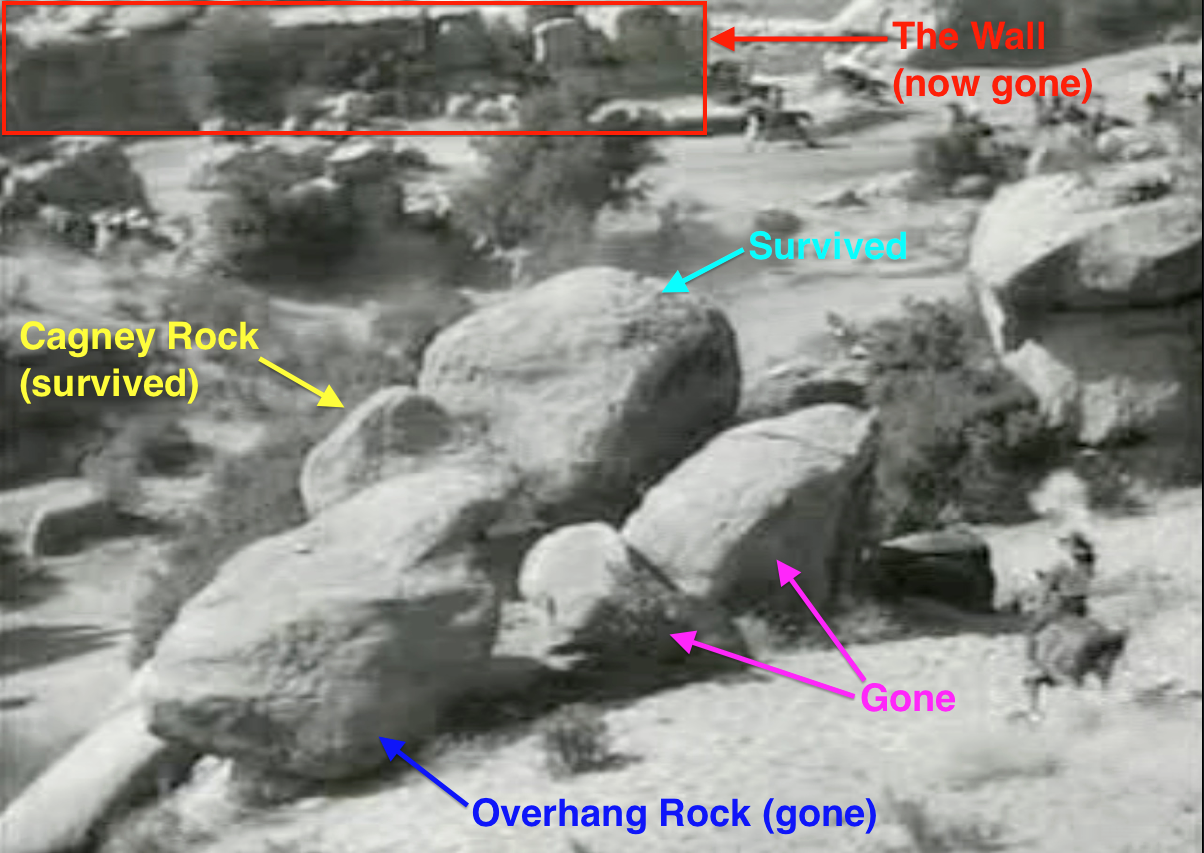 A marked-up version of the same "Land Beyond the Law" shot reveals some of the survivors, along with the casualties of development, in Iverson's Upper Gorge. 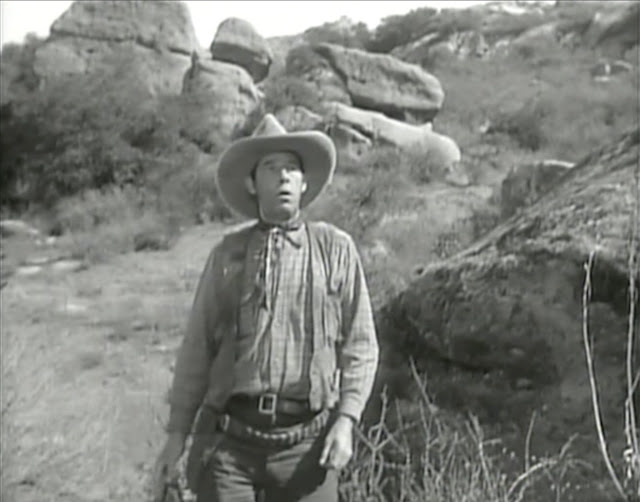 Here's a view of the same group of rocks from the opposite side — looking up at them from down the hill, looking more or less to the north — as seen in the Monogram B-Western "The Cheyenne Kid." Seen here, right to left, are Overhang Rock (above and to the right of the cowboy's head), Cagney Rock (the smaller rock perched kind of precariously, directly above the cowboy's head) and the unnamed "bigger and grander" rock to the left of Cagney Rock that also survived and can still be found at the site today. 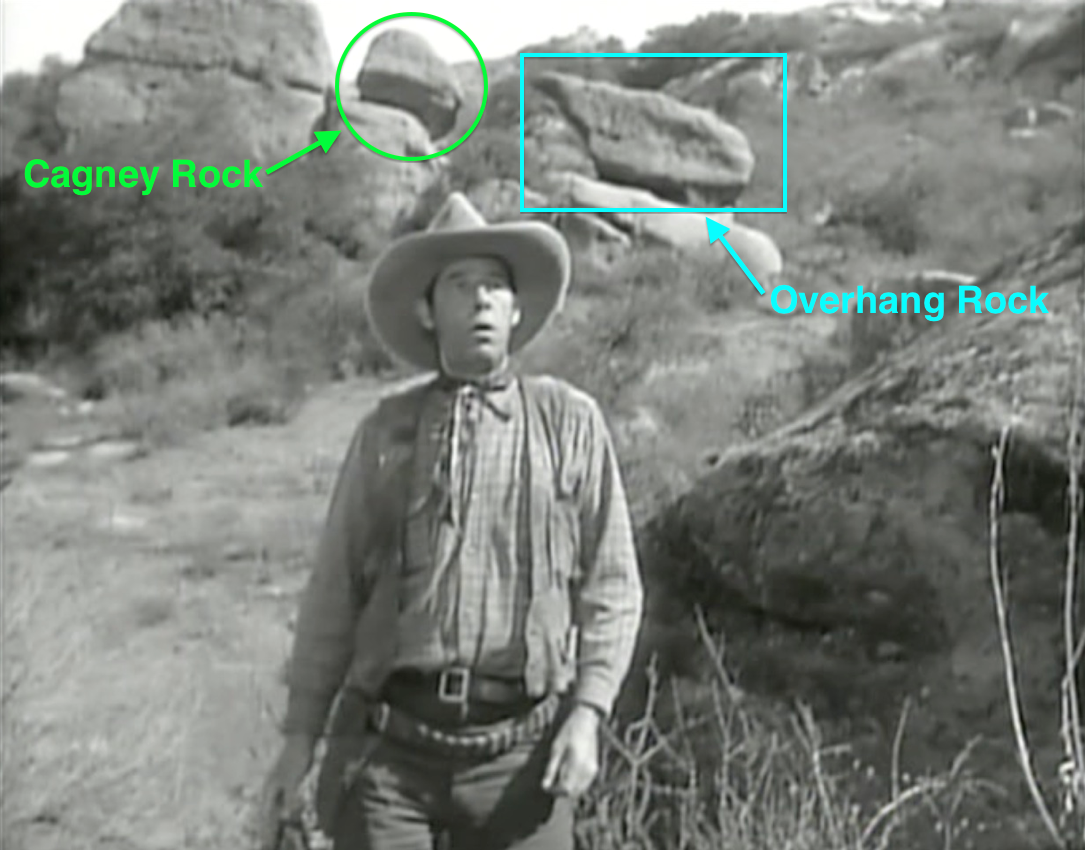 The same shot from "The Cheyenne Kid," with the key players highlighted. 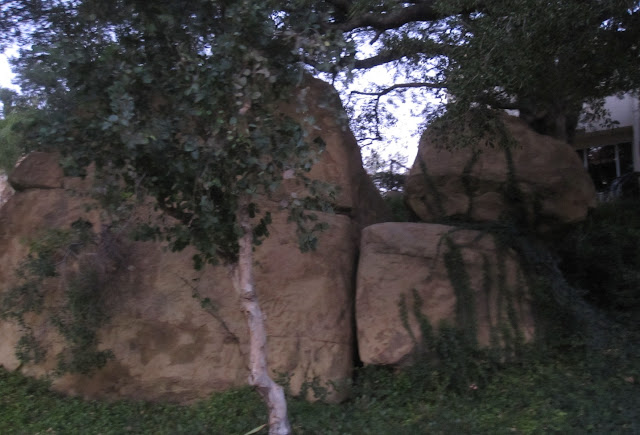 Here's what the survivors of that group look like today from about the same angle. Sorry about the dark shot but it was getting toward dusk and these rocks all now live in the shade of that one tree mentioned above. The rocks seen here are the same ones above and to the left of the cowboy's head in the "Cheyenne Kid" shot above. One last look at the surviving rocks as they appear today, highlighting the main man — the "Oklahoma Kid" himself, Cagney Rock.

I couldn't find a DVD version of "The Oklahoma Kid" to link to, but here's a link to a VHS version — at least until someone snaps it up.

I am currently working on a documentary titled "The Life & Time of James Cagney" and a lot of what I am focusing on is the Then & Now stuff. His old vaudeville theaters (then & now) etc-etc.... Anyway this is a really great study into very similar stuff. I love the history detail and share the nerd-like nostalgia for those forgotten little iconic things (such as Cagney Rock) that will easily fade into 'forgotten' unless a few of us hold on, preserve the detail for the new generation of nerds, fact diggers and passionate enthusiasts. Well done!!!