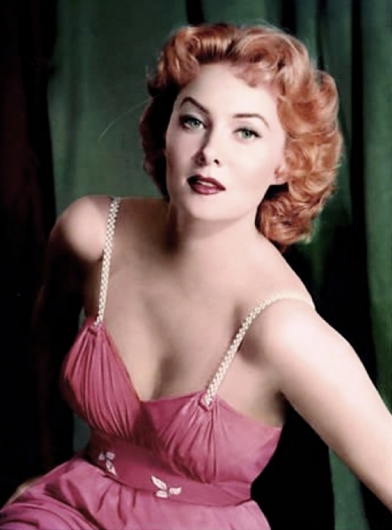 Screen icon Rhonda Fleming appeared in a number of movies shot on the Iverson Movie Ranch, including the 1959 Bob Hope Western comedy "Alias Jesse James." But her most memorable Iverson movie may be the 1955 Ronald Reagan-John Payne Western "Tennessee's Partner" — which includes a defining moment involving the actress and a particular rock. 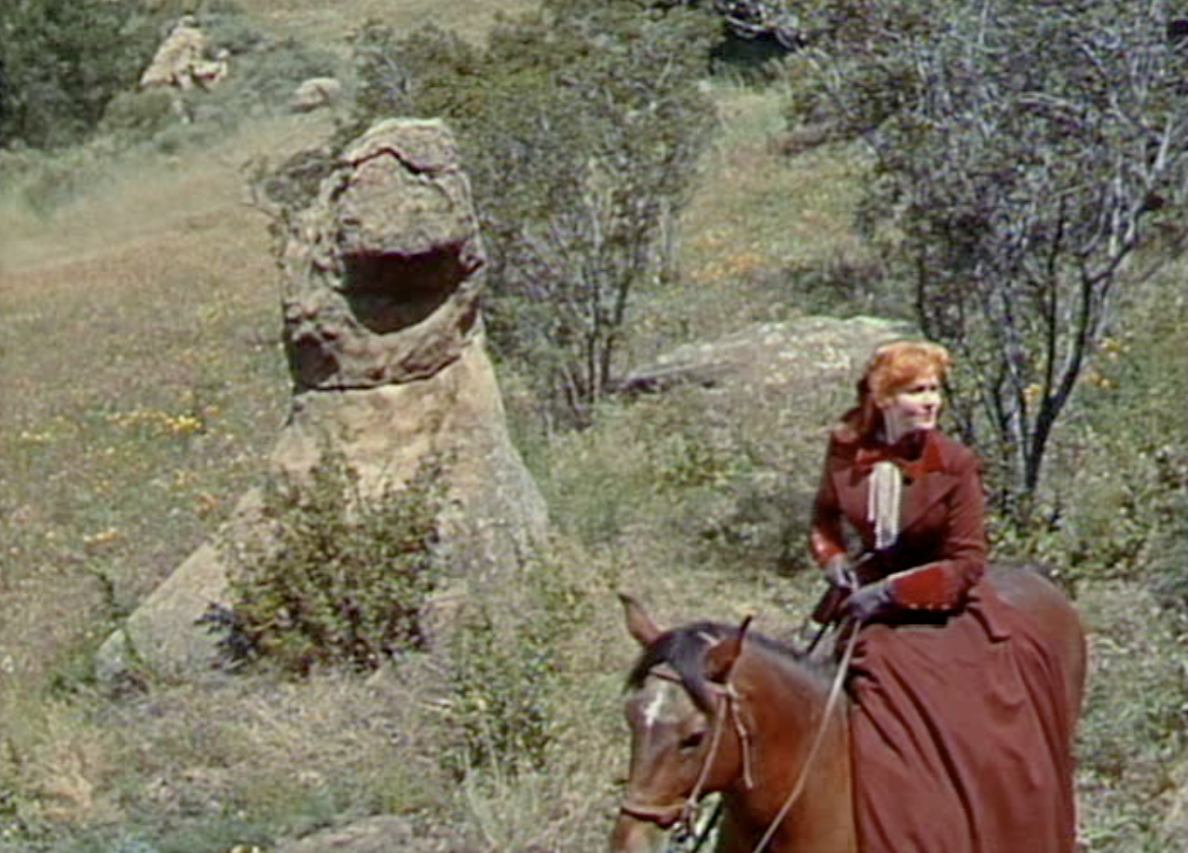 In the movie, Fleming is seen riding in a rarely filmed area just west of Garden of the Gods, and at one point she hides behind a monolithic rock that these days film historians call Rhonda Fleming Rock — and yes, I plead guilty to starting it. One reason is because "Tennessee's Partner" is probably the only movie where the rock is featured like this, and Rhonda seems to bring out the best in it.

Here's a short video clip of Fleming's moment in "Tennessee's Partner," featuring  the monolith that now bears her name:

So why is it that the rock almost never appeared on film? It might have to do with the rock's appearance, being perhaps a bit too, well, upright for some tastes. But I think the main reason was because it was a bit out of the way and hard to get to — especially when hauling a bunch of cumbersome movie equipment. The hillside on which Rhonda Fleming Rock is located is just that — a hillside — and filming there would have been tricky. 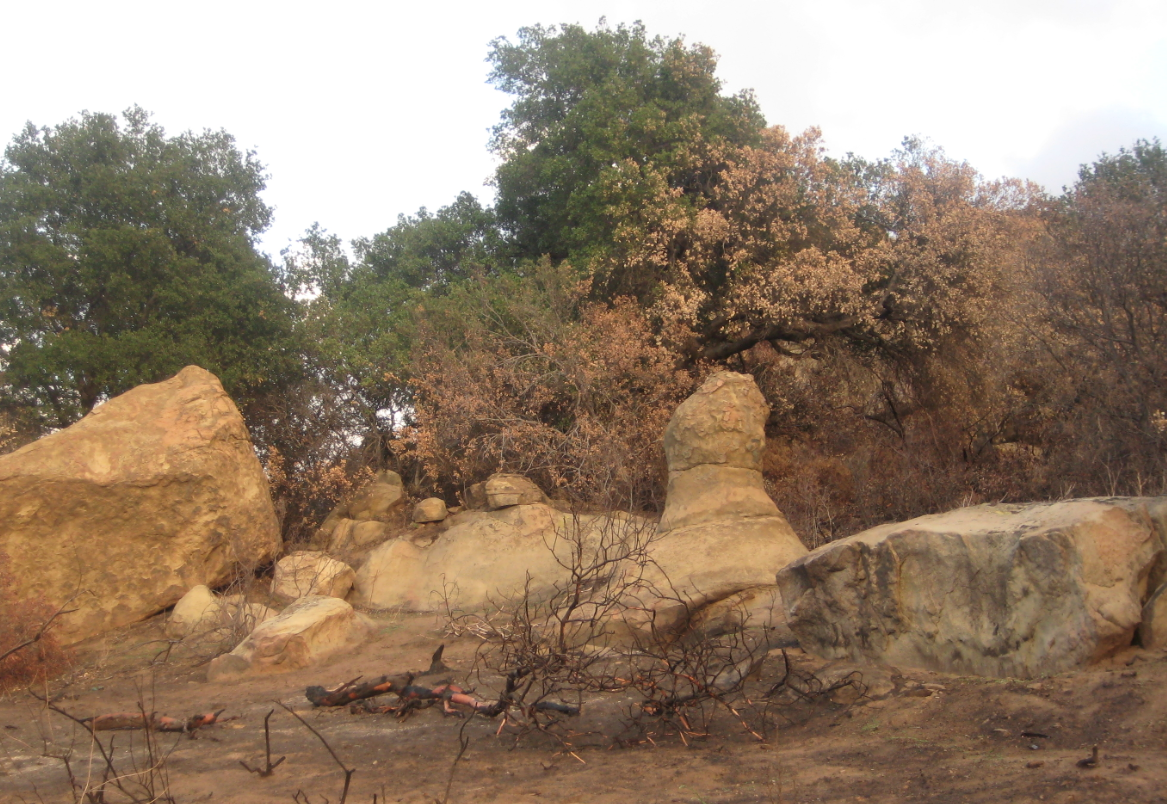 Rhonda Fleming Rock in 2008, after the Sesnon Fire

Rhonda Fleming Rock remains in place today, and is not hard to find — especially if you know where to look for it. (Check out the bird's-eye view near the bottom of this post.) In general, it's just west of the big sandstone monsters that define Garden of the Gods. Climb down from Garden of the Gods heading west, walk around a little and you'll probably stumble onto it. It's a bit "tucked in" among foliage and other rocks, so it doesn't exactly jump out and say "Here I am!" But it's there and you should be able to find it. 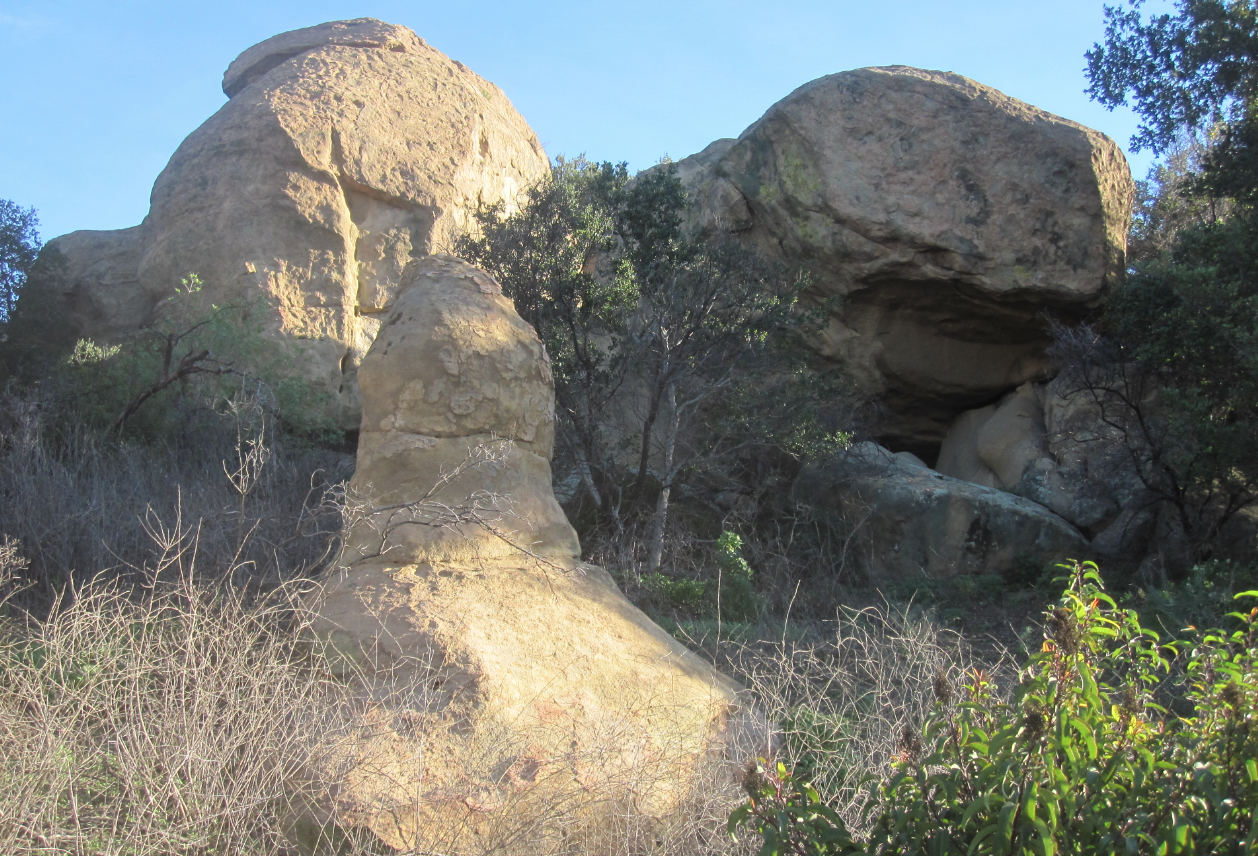 Above is another recent view of the rock, along with some of its much larger neighbors along the western edge of Iverson's Garden of the Gods. 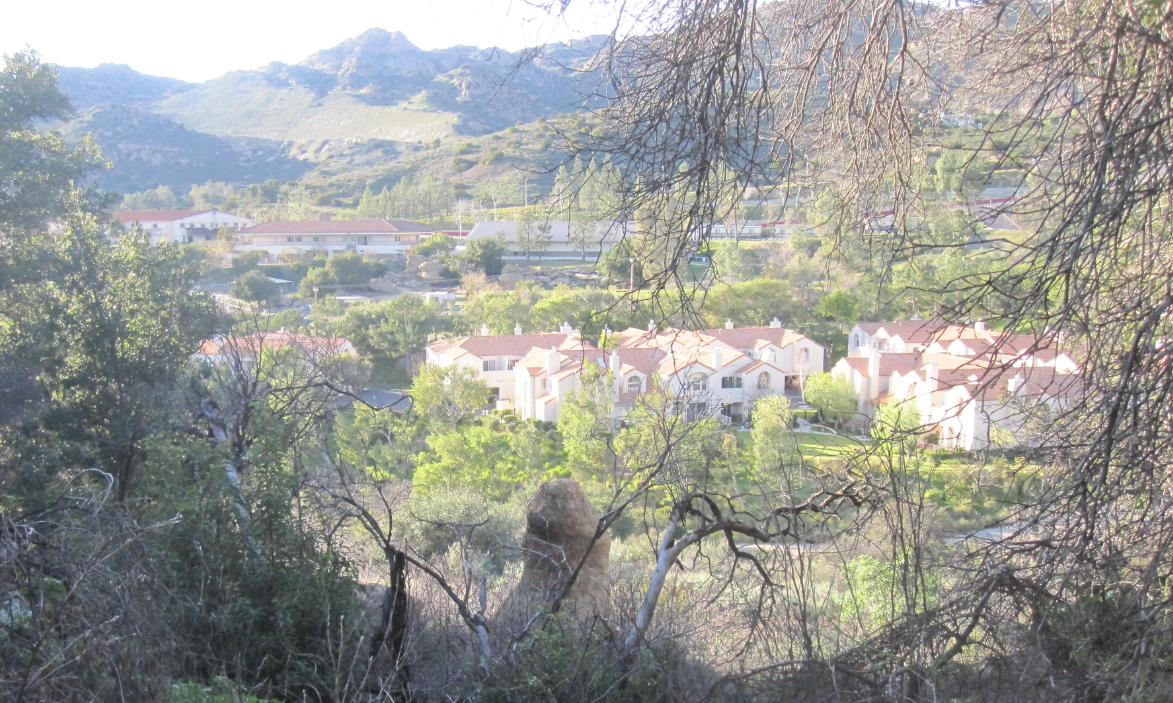 Another view of Rhonda Fleming Rock in 2011

Today the rock, visible at the bottom center of the above shot, is part of a landscape that includes condos and, above them, a sprawling church complex. The Rocky Peak area can be seen in the distance, to the west. 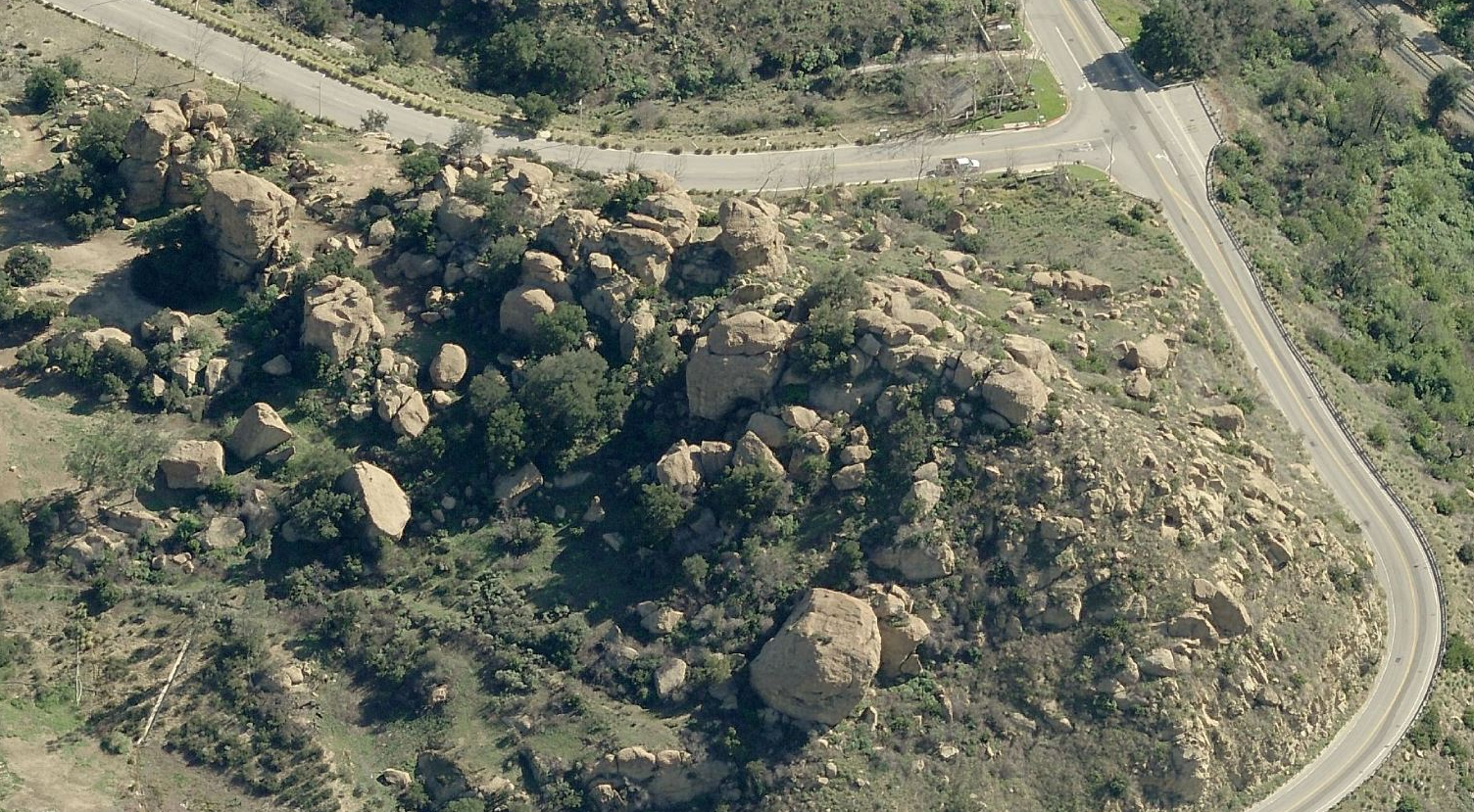 A tiny but distinctive glimpse of Rhonda's rock can be seen here, in the shady area just to the left of the center of the photo. This is the view looking east — you can click on the photo for a larger version. But unless you're in the mood for a "Where's Waldo"-type hunt, go on to the next photo, where Rhonda Fleming Rock is pinpointed. 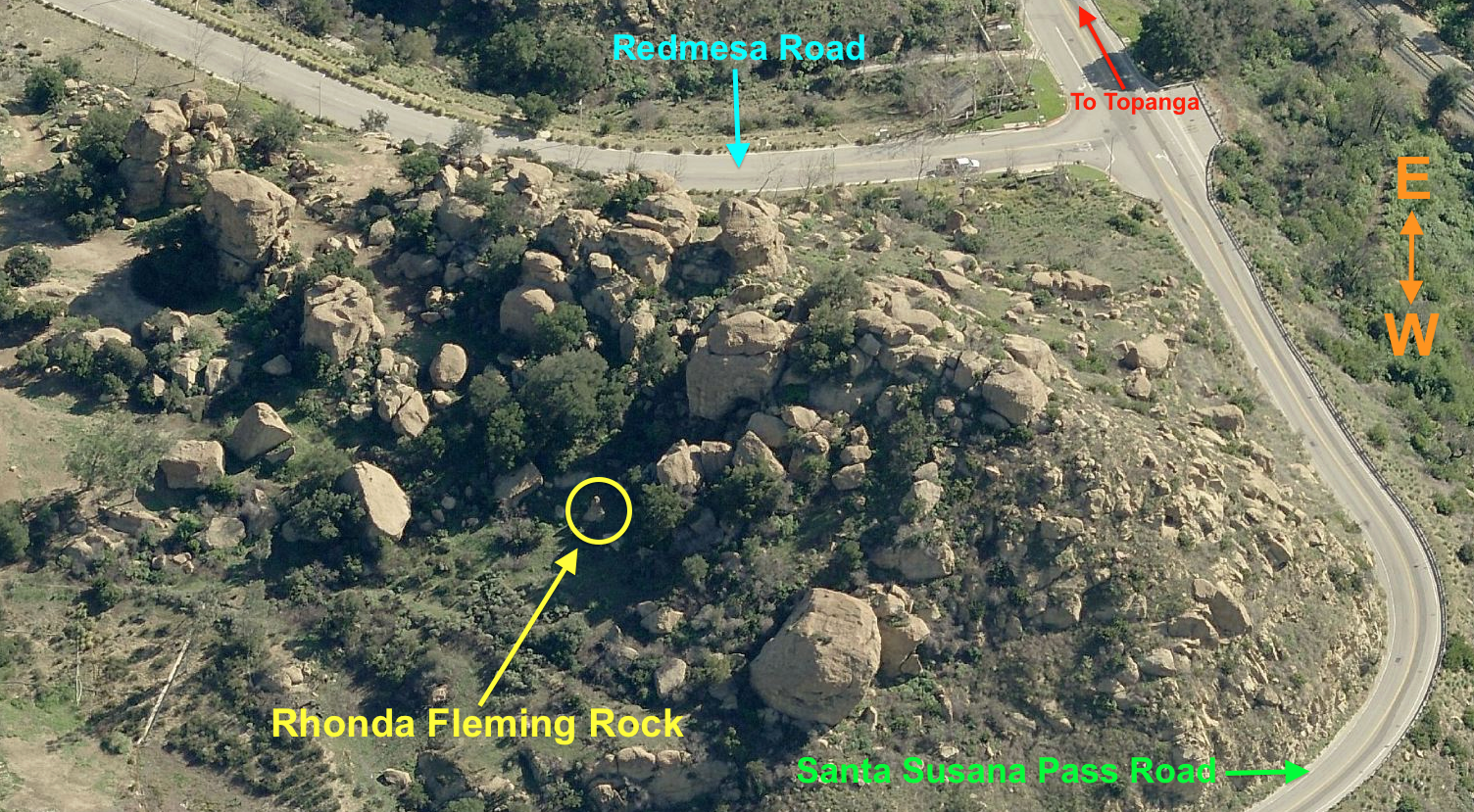 To visit the rock, first find your way to Chatsworth, Calif., and then find Topanga Canyon Boulevard. Just south of the 118 Freeway, head west on Santa Susana Pass Road, then turn right on Redmesa Road and park just before the condos. The blue-green iron gate on the west side of Redmesa marks the trail into Garden of the Gods — Have fun! 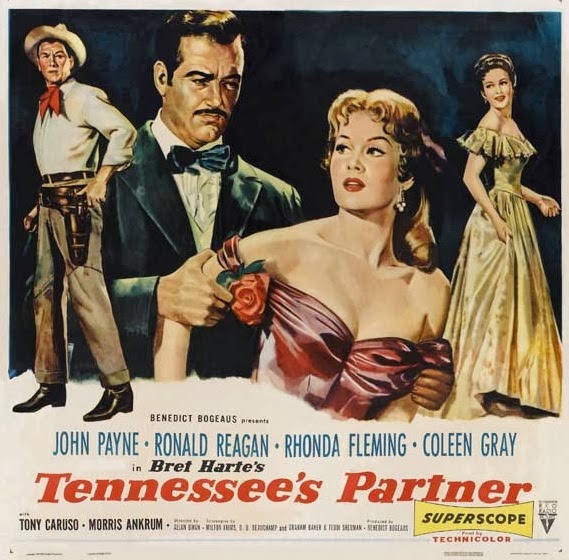 I've blogged before about "Tennessee's Partner," which includes a memorable Ronald Reagan death scene shot in central Garden of the Gods — just around the corner from Rhonda Fleming Rock. Click here to read my blog entry all about the location where Reagan was gunned down.

Below you'll find links to a few different versions of "Tennessee's Partner" on DVD, for sale on Amazon.com. If you can snag the DVD that has both "Tennessee's Partner" and "Cattle Queen of Montana," starring Barbara Stanwyck, that one's an especially good deal for Iverson Movie Ranch aficionados, as both movies were filmed on the ranch.

I wish to tell Rhonda what a beautiful person she is
I have never written to a movie star before. So
I just team about her now after watch some
Of her movies. Hollywood and American
We're blessed to have such a great actress.
Best wishes and all my love to a truly great
Person. Carl Adrian. Tsgt UASF. Retired
akadrian@mtaonline.net

I have to state that Mrs Fleming did incredible things with her money to help other people. She also was a true To her faith and a model to follow while attaining so much fame. In case you see this Carla thanks for everything you did to help me make contact with Mrs Cartson before she passed. Would have liked to have talked to you.