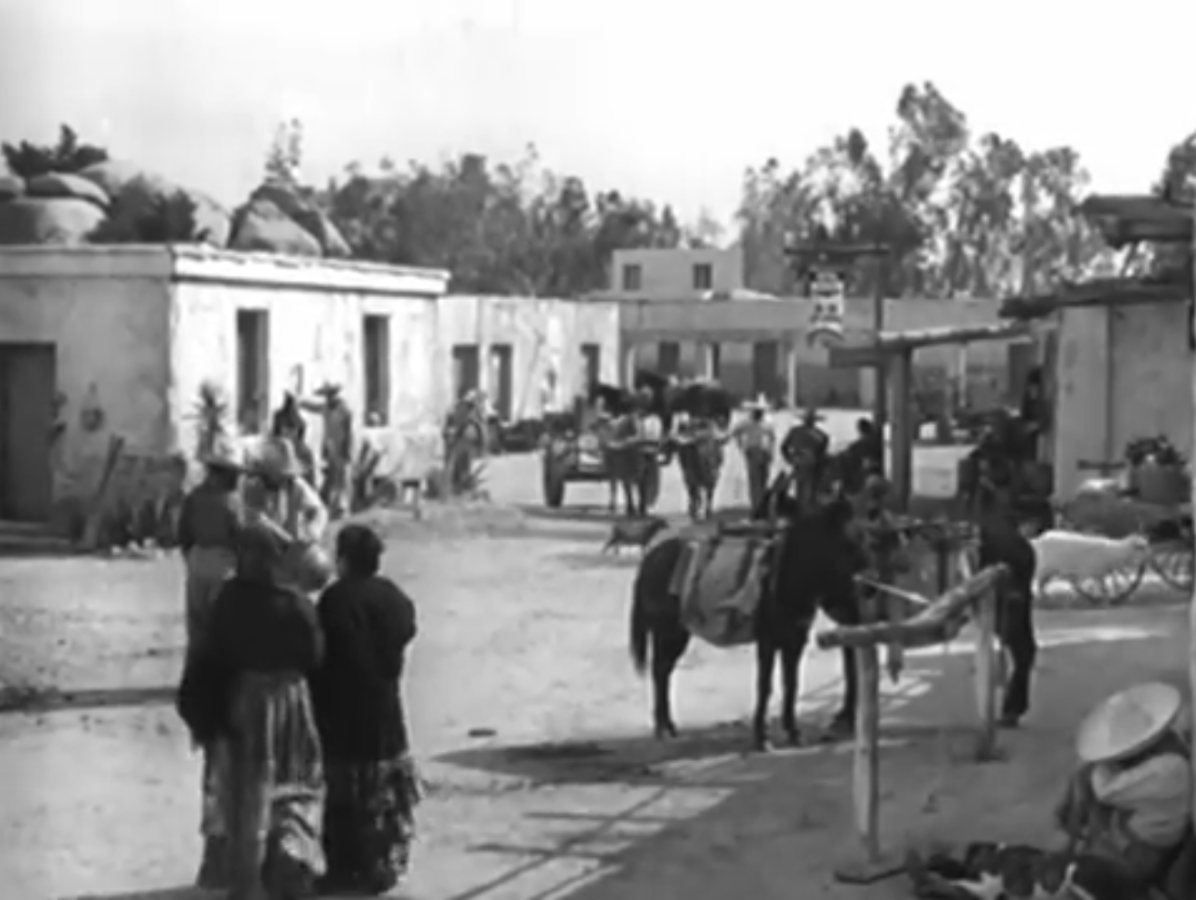 This adobe village got my attention when I spotted it recently in the 1940 Paramount B-Western "The Light of Western Stars," starring Russell Hayden, Victor Jory and Jo Ann Sayers. The one thing I couldn't stop focusing on was the rock formation that's partially visible above the adobes, toward the left in the above screen shot. 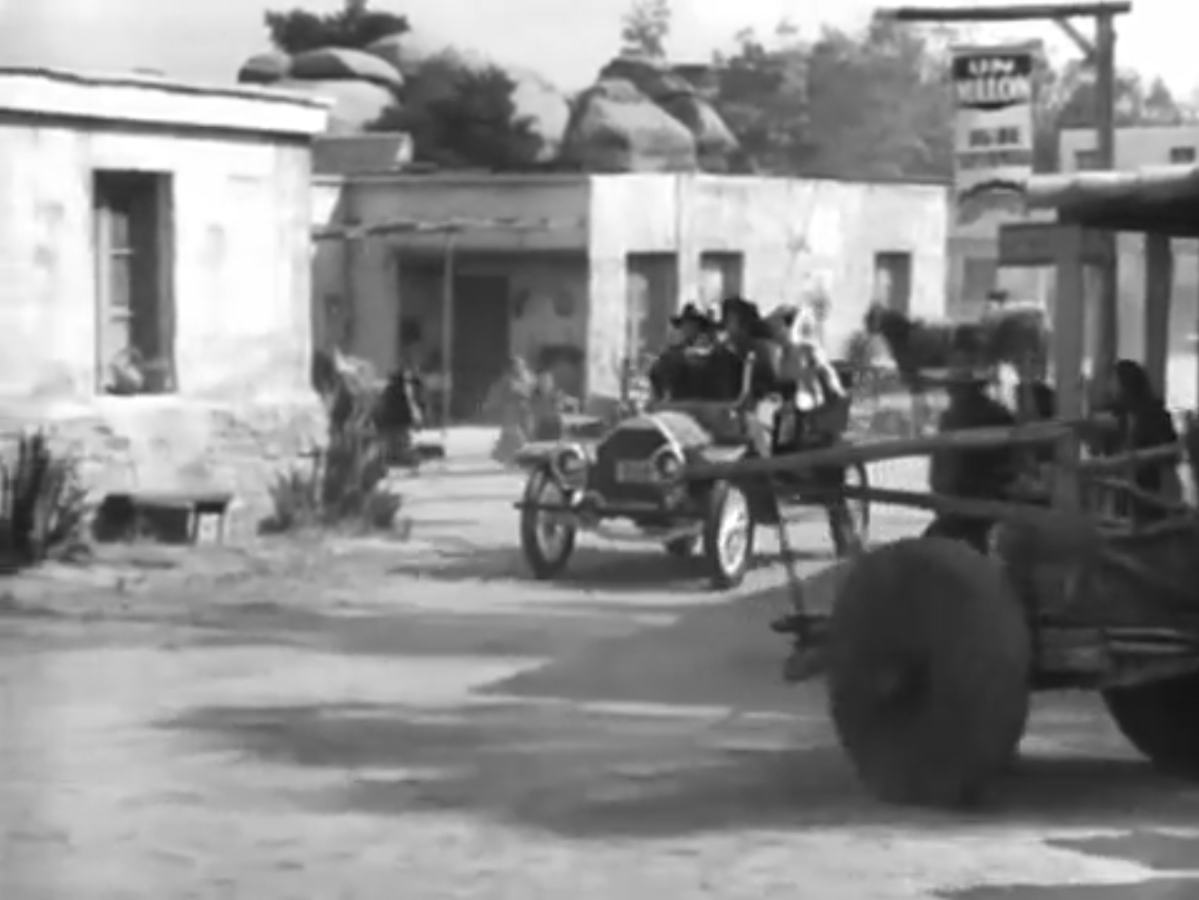 This shot from the same sequence provides a slightly better look at those rocks, which were looking familiar to me at this point. I thought they might be the Pirate Ship, a familiar rock formation at the old Iverson Movie Ranch. It turned out that's exactly what they were, and I was suddenly having one of those "wow" moments that only come once in a while amid endless hours of fruitless scouring of boring old movies. 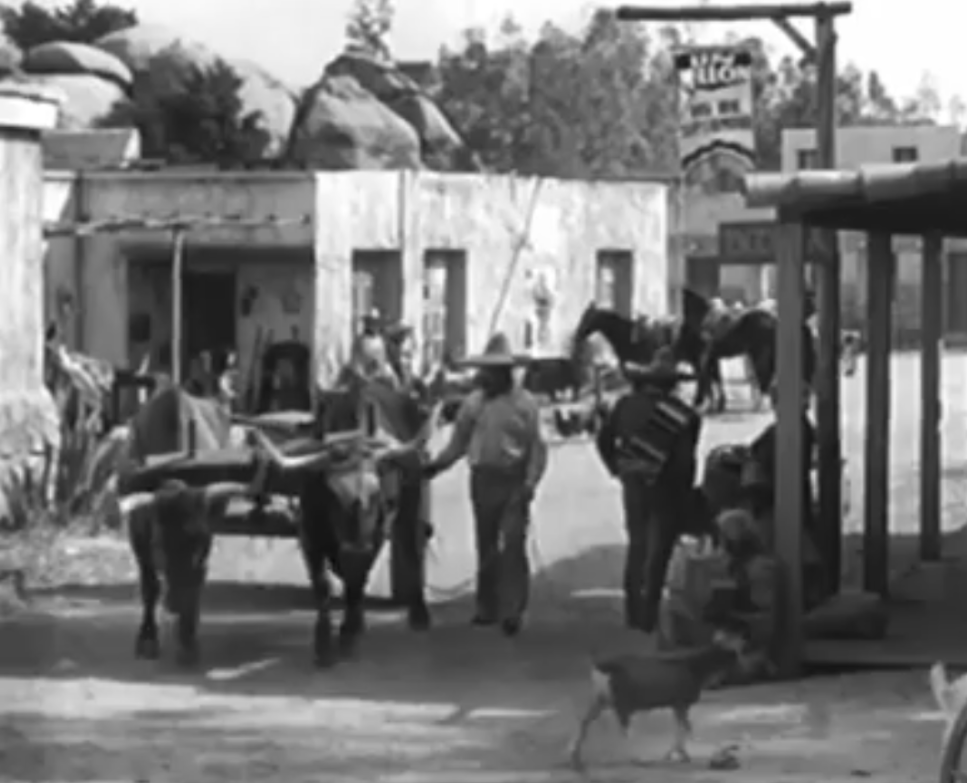 A still closer look at some of the adobes and the rocks above them — this screen shot offers what is probably the best view we get of the Pirate Ship in "The Light of Western Stars." The sequence turns out to be an important one, adding to what is known about the evolution of construction during the late 1930s and early 1940s on the portion of the Iverson Movie Ranch known as Sheep Flats. 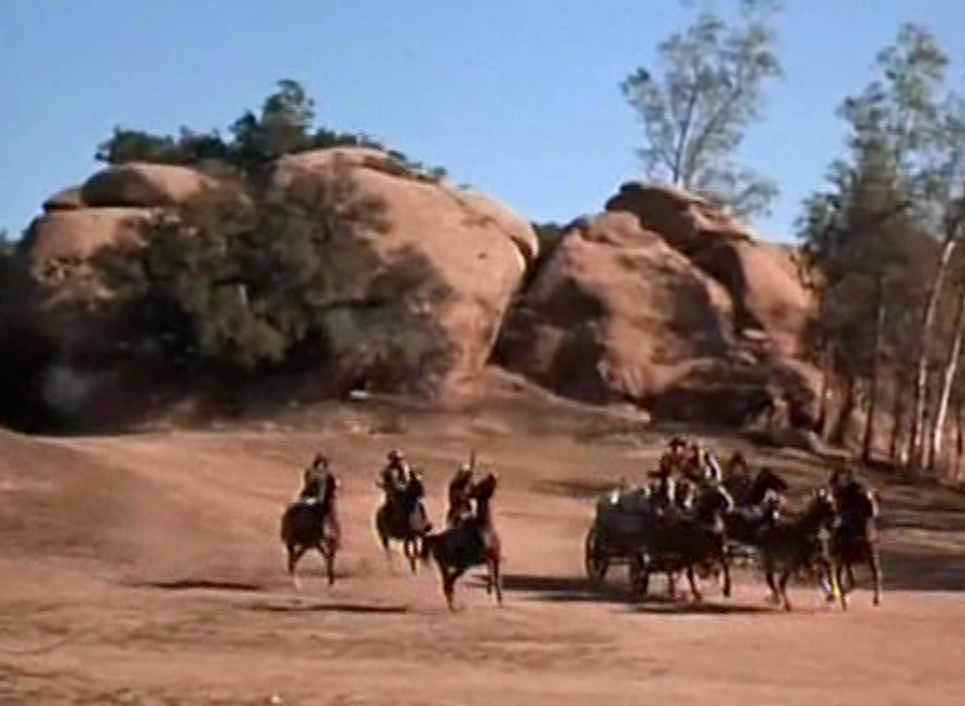 Here's a view of those same rocks — the Pirate Ship — more than 20 years later, in an early episode of the TV show "Bonanza" called "Cutthroat Junction," which first aired March 18, 1961. While not exact, the angle is similar to the one shown in "The Light of Western Stars." You may be able to spot the similar shapes of the tops of the rocks in the two shots above. If you're having trouble, notice the large triangular rock directly above the wagon in the "Bonanza" shot, and the shadowy section of rock just above that, descending toward the right at a 45-degree angle. Then try to find that same group of rocks in the "Light of Western Stars" shot — in the photo above this one, the rock is directly above the corner of the main adobe in the shot. The rock even has the same wispy tree "growing out of it" in both productions. If you look closely, the rest of the rocks match too. The Pirate Ship remains in place today, part of the Indian Hills Mobile Home Village. I don't have a shot of it from the exact same angle as in either of the productions above, but the above shot comes reasonably close, and shows what the formation looks like in its contemporary setting. It even appears to still have that same tree "growing out of it" — although the tree has filled out considerably and is no longer what one might call "wispy."

This is the view of the Pirate Ship that gives it that name — from this angle the rock feature has always reminded me of one of the old sailing vessels with its main sail at full billow. I've posted before about the Pirate Ship — click here to see that post. The formation has been a helpful identifier for the Iverson Movie Ranch in the past, and it came through again by helping to pinpoint the location for "The Light of Western Stars." "Wee Willie Winkie" (1937): The Pirate Ship rock formation, top, and a portion of the India Fort;
Shirley Temple appears at the far right

Buildings appeared in that same area — just below the Pirate Ship — beginning with the Shirley Temple movie "Wee Willie Winkie" in 1937, as seen in the screen shot above. The lookout tower at the very top was in place only for that one movie. The rest of the structures coexisted for years with the Western street that was built just east of the India Fort in late 1944 for "Along Came Jones" and became a fixture at Iverson until 1957. The "Wee Willie Winkie" India fort was a sweeping set of structures that spanned much of the west end of Sheep Flats, and the set outlasted the Western street, finally being torn down when Sheep Flats was sold off in 1963. 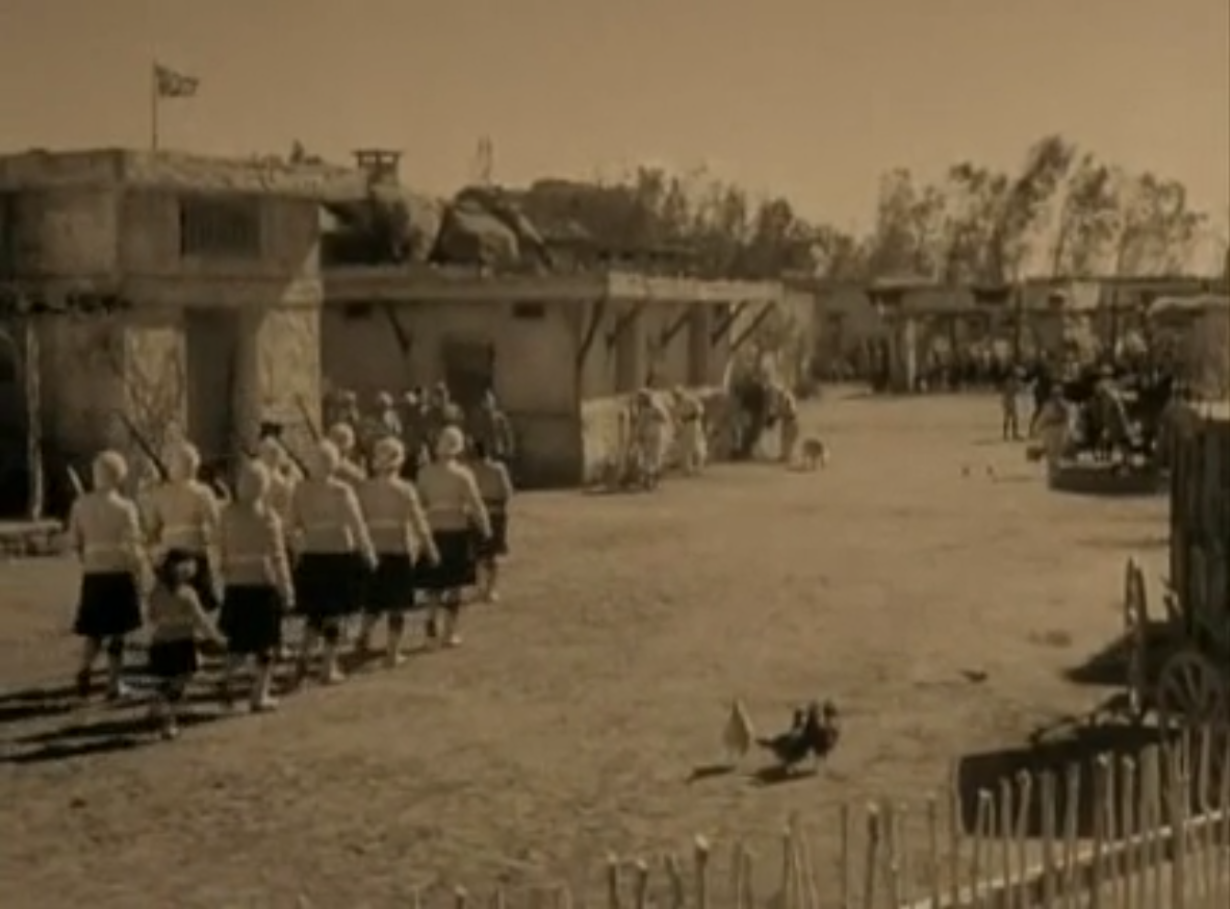 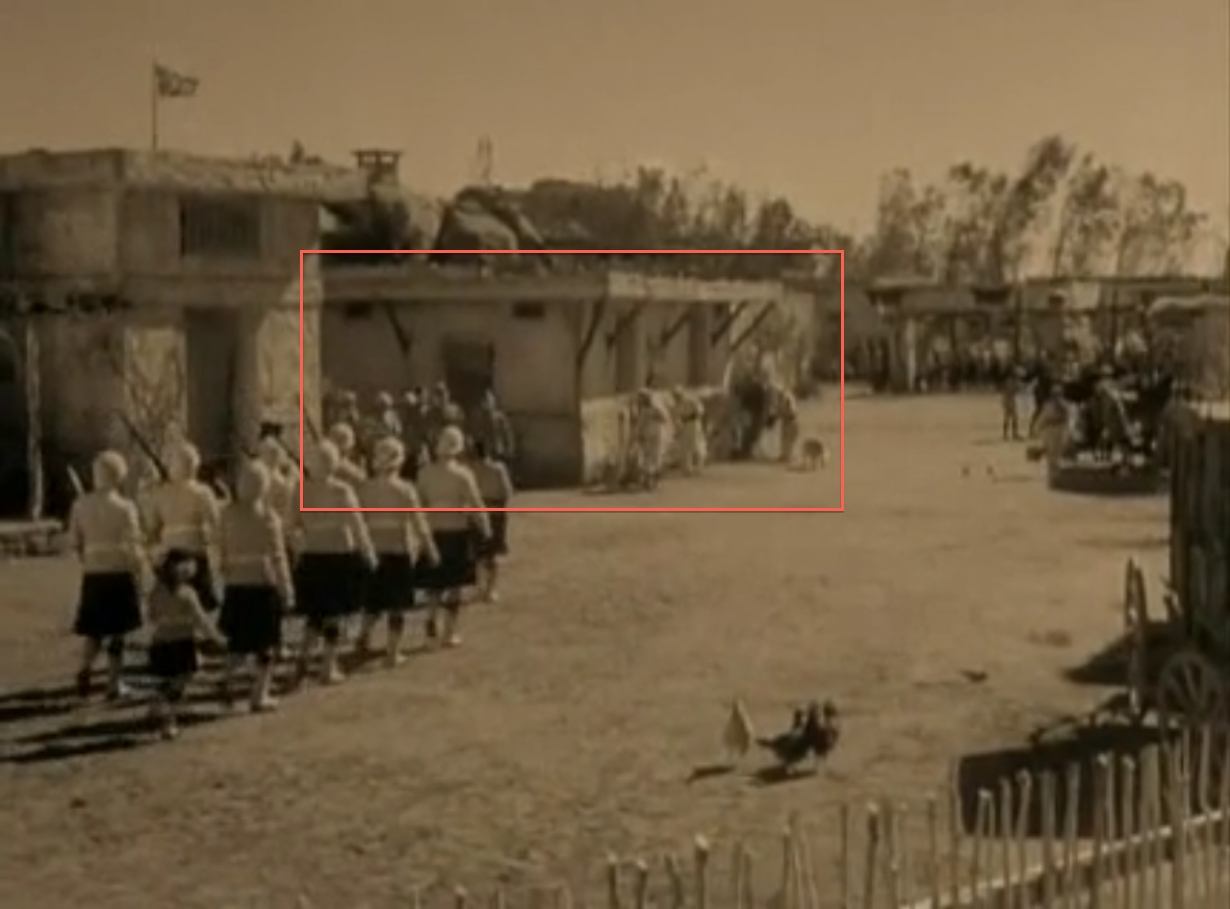 "Wee Willie Winkie" (1937) — notice the building highlighted by the rectangle 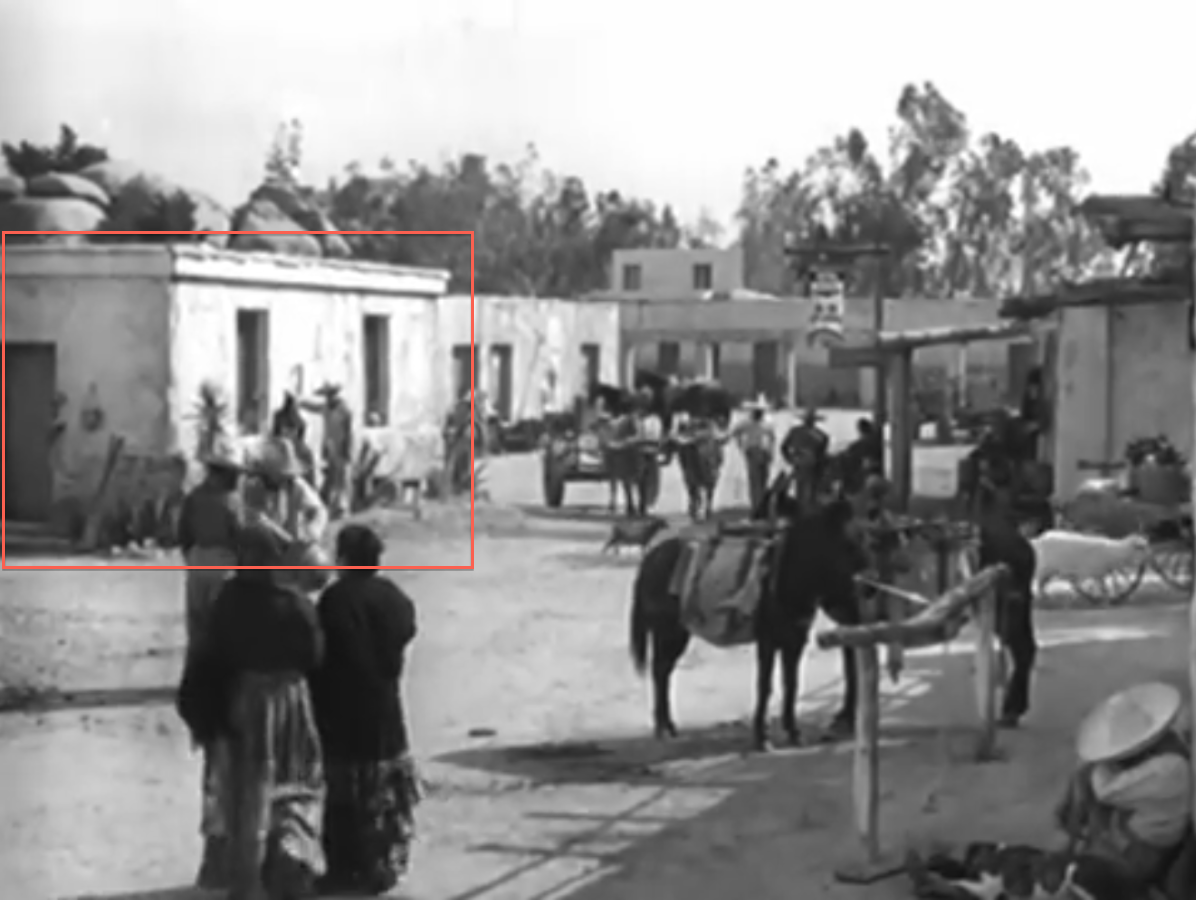 "The Light of Western Stars" (1940) — again, notice the highlighted building

The positions of the buildings in the above two screen shots are similar, and in both cases the building is directly below the Pirate Ship rock formation. Additionally, both buildings have a door and two side windows in the same place. The appearance of the two roofs is different, but that's the case with movie buildings in general — they could have a certain "look" in one production and then have completely different trim in another production. It's a given that the horizontal roof extensions on many of the buildings of the India fort in "Wee Willie Winkie" were removed after filming for that production.

My gut tells me it's the same building in both productions, and even though I'm not prepared to declare with absolute certainty that it is, it's the best evidence I've found to date of a direct connection between the construction for "Wee Willie Winkie" and subsequent productions in that corner of Sheep Flats. 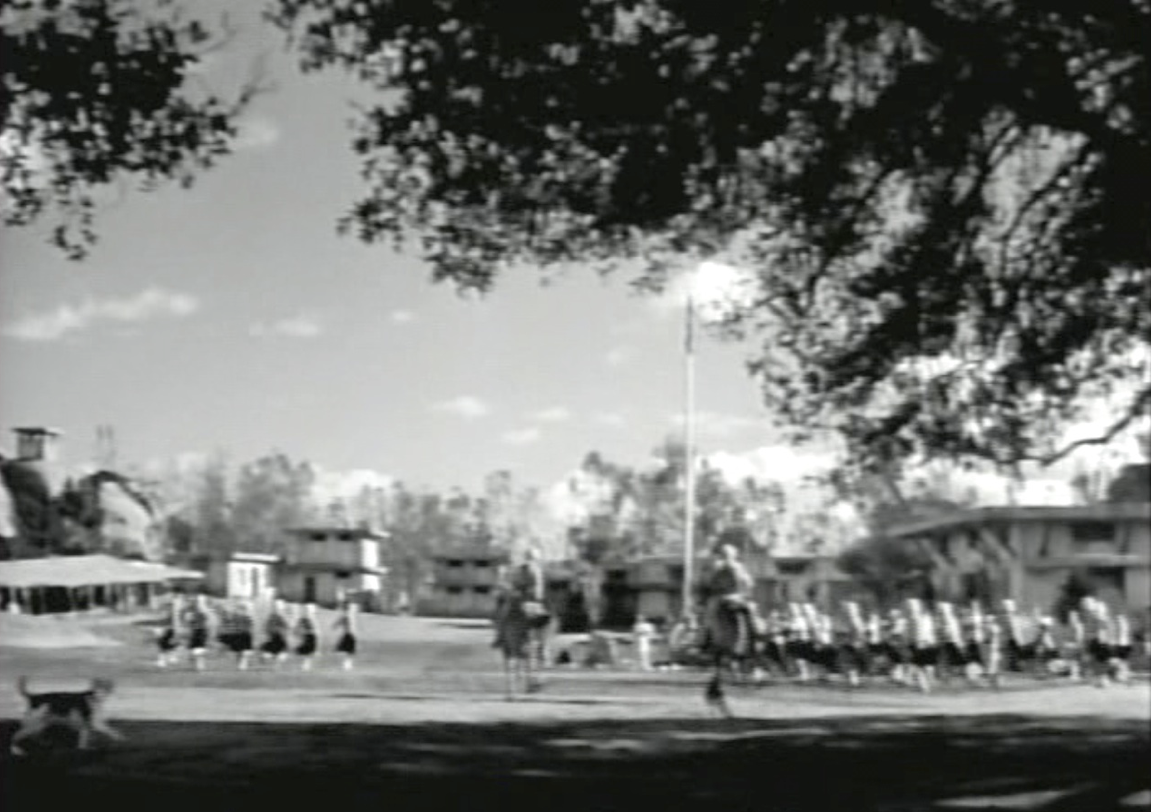 "Wee Willie Winkie" — a wide view of the India fort

The sprawling India fort built for "Wee Willie Winkie" in 1937 comes up frequently in research into the history of construction on Iverson's Sheep Flats, as it was clearly the production that got the ball rolling in that area. I've posted before about the connections between the "Wee Willie Winkie" fort and later productions, such as "Army Girl" (1938) and "Rawhide Rangers" (1941). (Click here to see my original post about the stunning adobe fort at the western edge of Sheep Flats, and here to see a follow-up with additional revelations.) But what's different about the sightings in "The Light of Western Stars" is that, with the exception of "Wee Willie Winkie," the buildings that turn up are almost always farther west — toward the western edge of Sheep Flats.
Posted by Swami Nano at 12:33 PM