We knew and loved him as Dickie Jones — a B-Western child star and early TV Western pioneer; Richard Percy Jones, the voice of "Pinocchio," is dead at 87 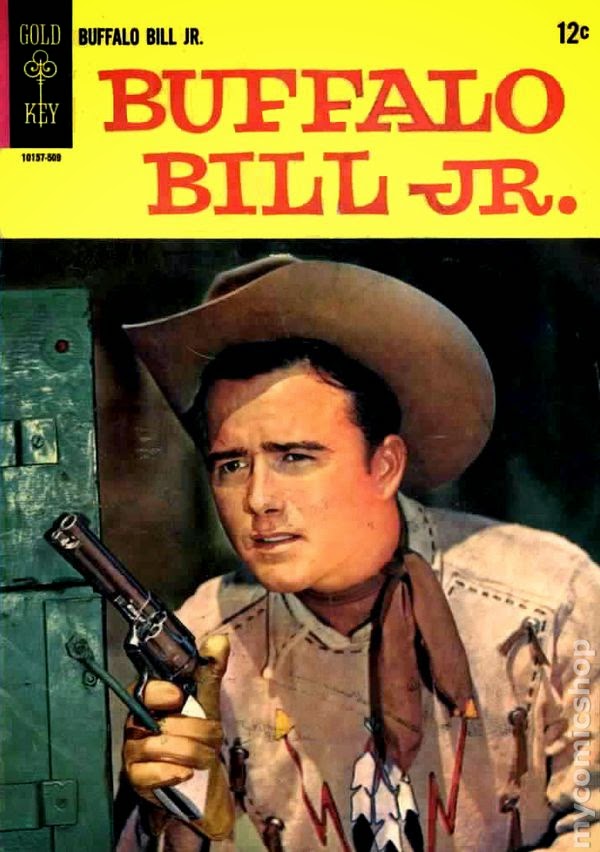 With great sadness I must report the death of a man who was a fixture on the Iverson Movie Ranch during his acting career. Dick Jones made an impact as a child actor in B-Westerns, as a young man in the early days of television, and — as if that weren't enough — as the voice of the beloved Disney character "Pinocchio" in the 1940 animated movie. 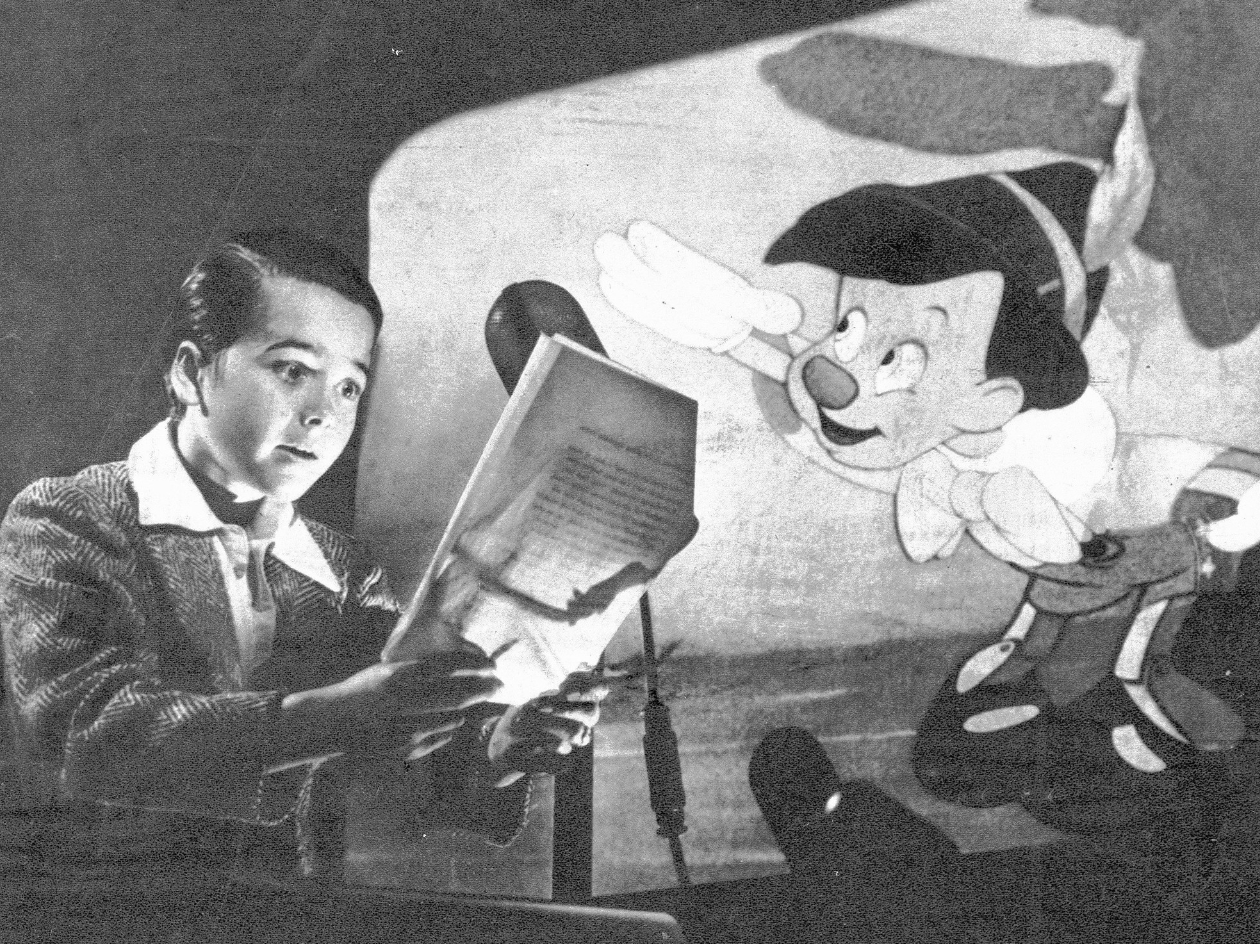 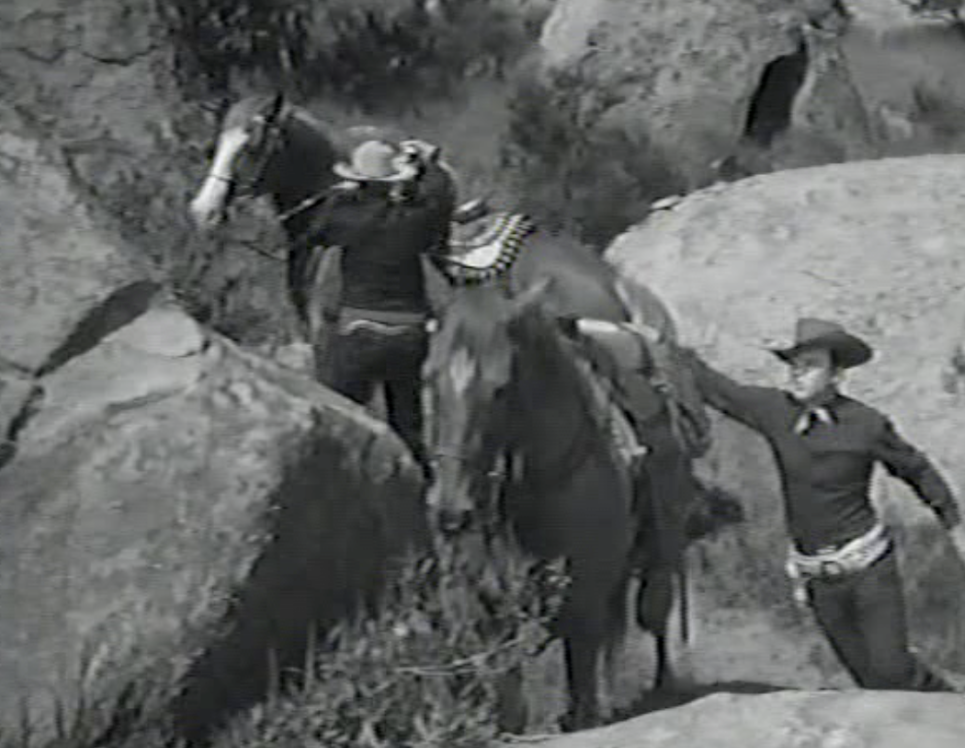 Dick Jones, at right, on the South Rim of the Upper Iverson Movie Ranch in "Wagon Team" (1952) 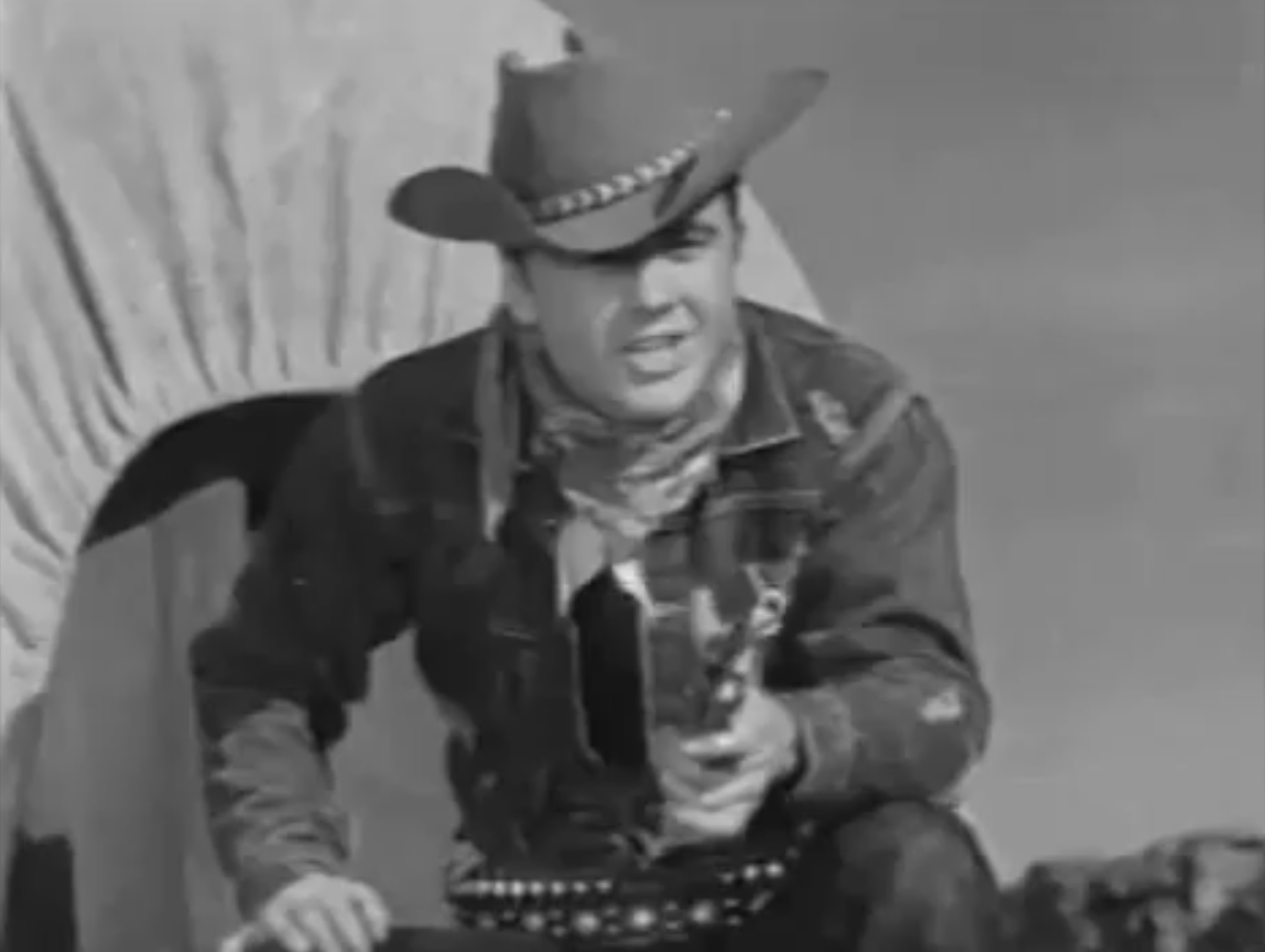 Autry was savvy enough to recognize the increasing importance of the new medium of television, and as Autry moved to the small screen with his own show, he brought Jones along for the ride. Autry groomed Jones with a string of appearances on "The Gene Autry Show" from 1950-1954. At the same time, he put Jones in a meaty role as the sidekick to B-Western veteran Jock Mahoney on the "Range Rider" TV series, produced by Autry's Flying A Pictures. 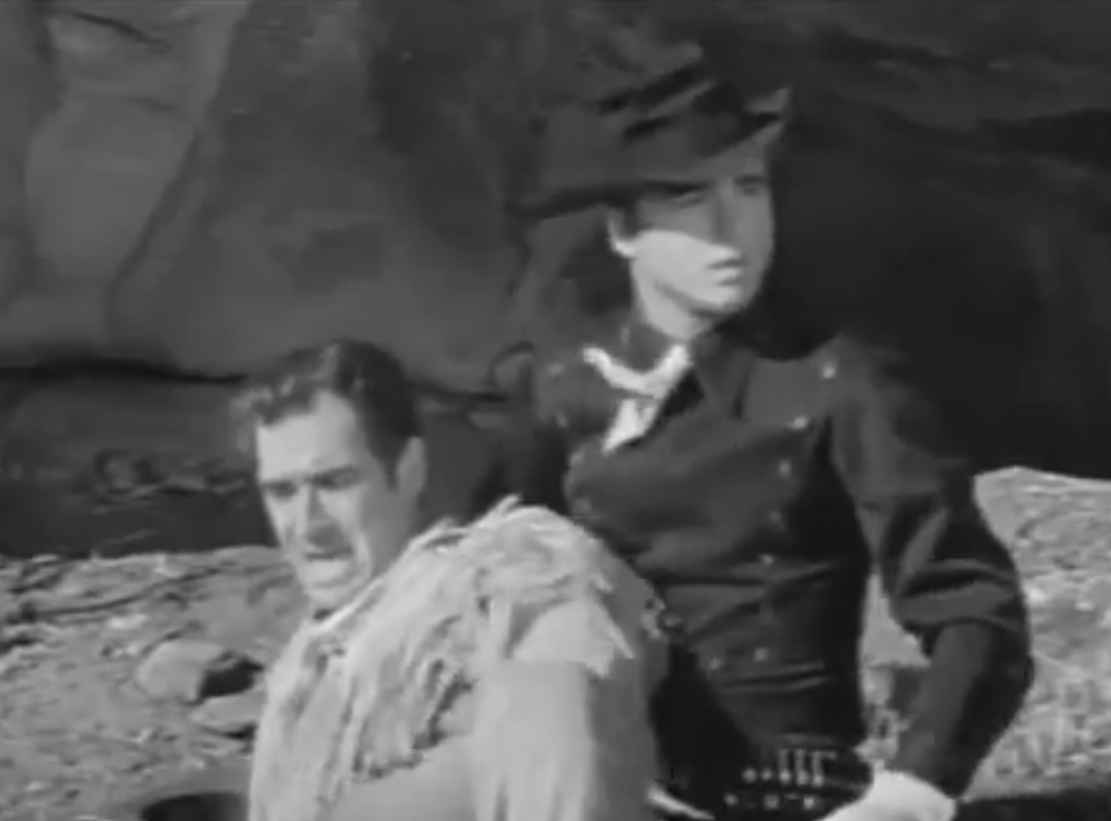 Dick Jones, right, and Jock Mahoney in "The Range Rider,"
with Iverson's Center Rock in the background (1953)

Jones played the teenage sidekick to the "much older" Mahoney (born Jacques O'Mahoney and billed as Jack Mahoney on the show), even though Jones was 26 by the time "The Range Rider" wrapped its three-year run in syndication in 1953 — and even though the ever-youthful Jones was only eight years younger than the veteran actor Mahoney. 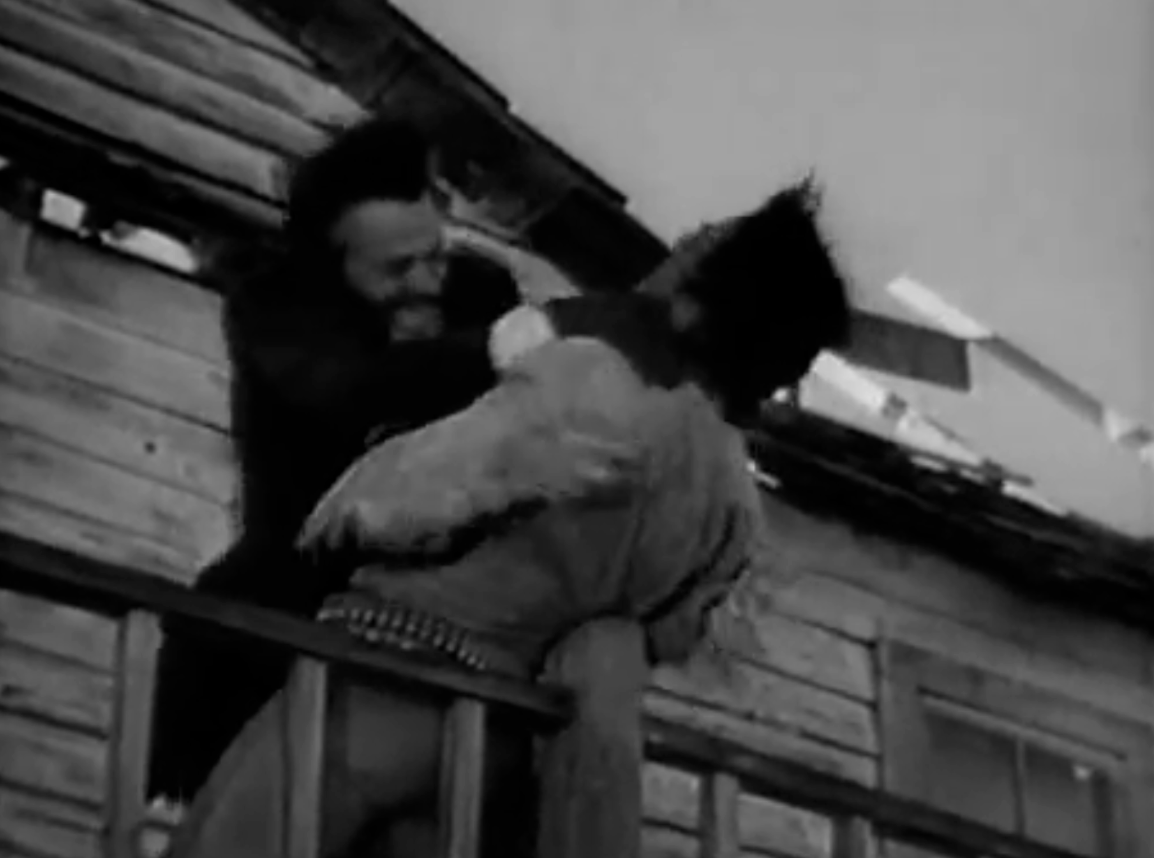 "Buffalo Bill, Jr." (1955) — Dick Jones, right, appears to be getting the worst of it
in a fight with a bad guy on Iverson's Western street

When the timing seemed right, Autry gave Jones his own show: "Buffalo Bill, Jr.," another Flying A Pictures production. The show featured a who's who of B-Western veterans in guest roles: Lee Van Cleef, Slim Pickens, Glenn Strange, Denver Pyle, William Fawcett, Kirk Alyn, Jack Ingram, John Doucette and Lane Bradford, to name a few. Jones, who was an accomplished stuntman as well as a natural horseman, put those skills to good use on the series, which had a 42-episode run in syndication, from 1955-1956. 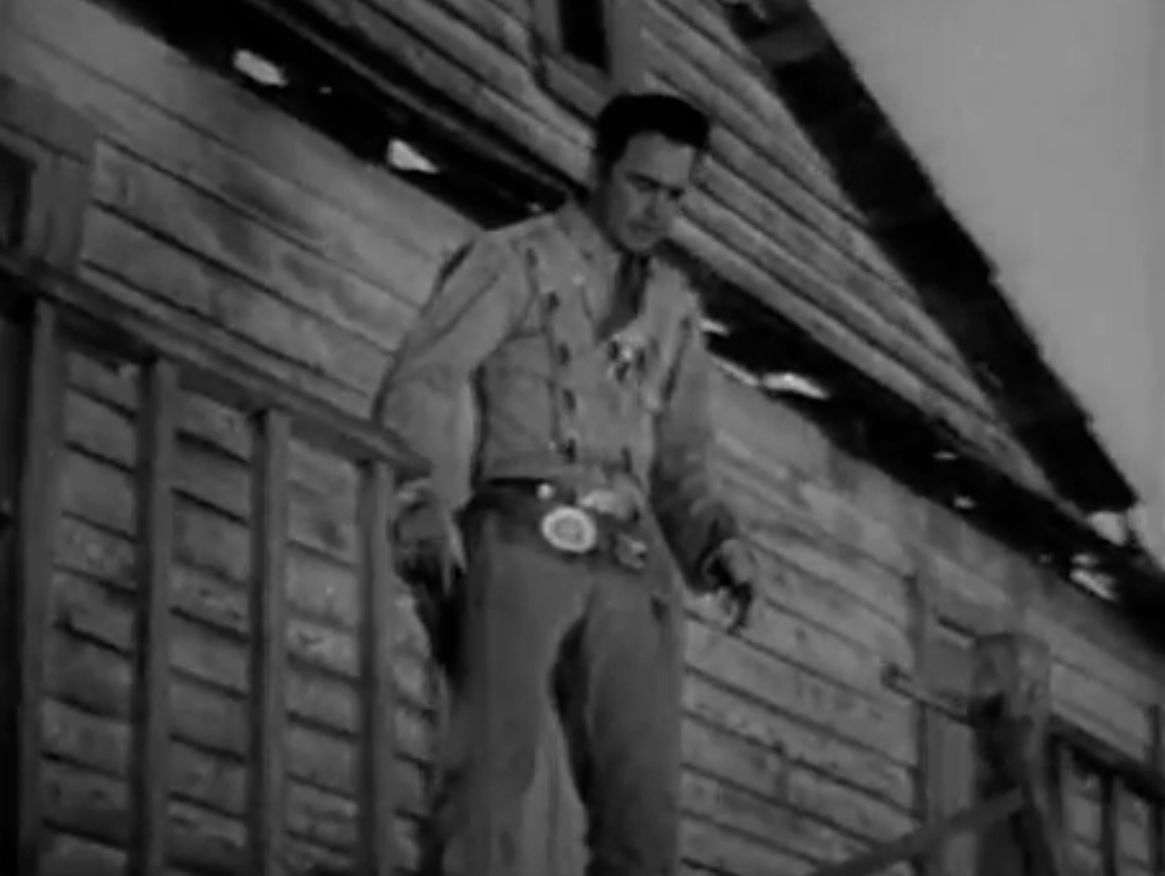 Dick Jones, as Buffalo Bill Jr., has turned the tables on the bad guy, who wound up
crashing through the second-story railing off the hotel building in Iverson Village

By now Jones was "all grown up" and had lost the "Dickie" credit of his childhood, being billed as Dick Jones. But even though he was only 29 when "Buffalo Bill, Jr." ended its run, his career tapered off quickly after that and he appeared only sporadically on TV and in films over the next decade. His final credit was a supporting role in the Rod Cameron Western "Requiem for a Gunfighter" in 1965. 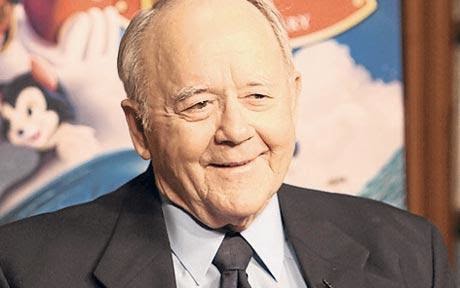 Jones retired from acting after "Requiem" and reportedly went into real estate and banking. A popular figure for decades at Western movie fan events — and by all accounts a super-nice guy — he was honored in 1989 with the Golden Boot Award, given to the greats of the Western genre for their contribution to depictions of the West on TV and in film. 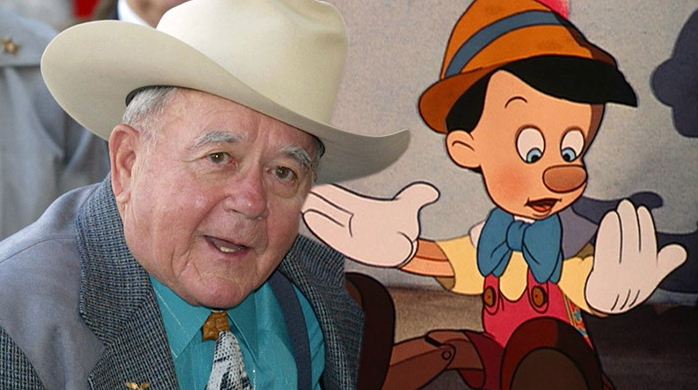 In yet another honor for his highly honored career, Jones was named a Disney Legend in 2000.
Posted by Swami Nano at 9:38 PM

1940's Pinocchio Is One Of My Favorite Films Of All Time.