Connecting the dots between the Iverson Ranch and its infamous neighbor the Spahn Movie Ranch, once home to the Manson Family The Spahn Movie Ranch in Chatsworth, Calif., which became notorious as the home of Charles Manson and his followers, was one of the closest neighbors to the Iverson Movie Ranch. Spahn was situated "catty-corner" to Iverson's main entrance, just across Santa Susana Pass Road to the southwest of Iverson. 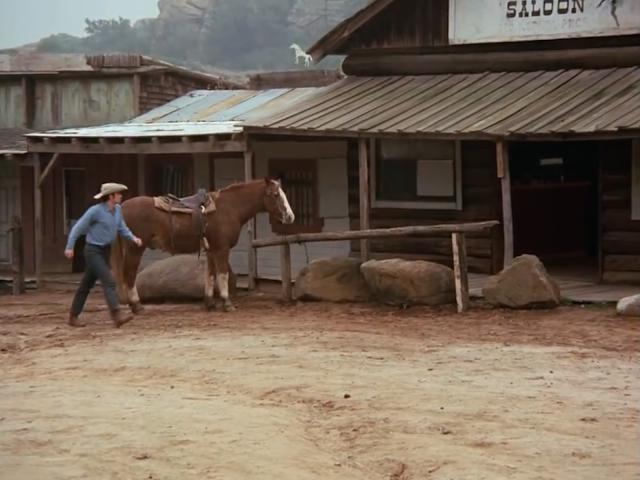 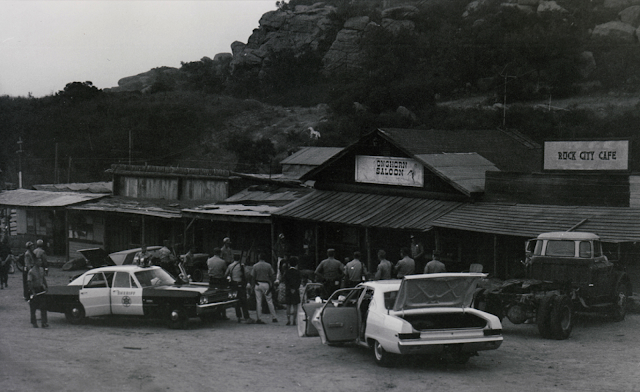 Spahn's busiest period for filming overlapped with the Manson Family era, with many of Spahn's most high-profile productions shot in the late 1960s and early 1970s. Pictures of the ranch from 1969, such as this news photo of a police raid, reveal that the main set area looked exactly as it did in the 1969 movie "Linda and Abilene." 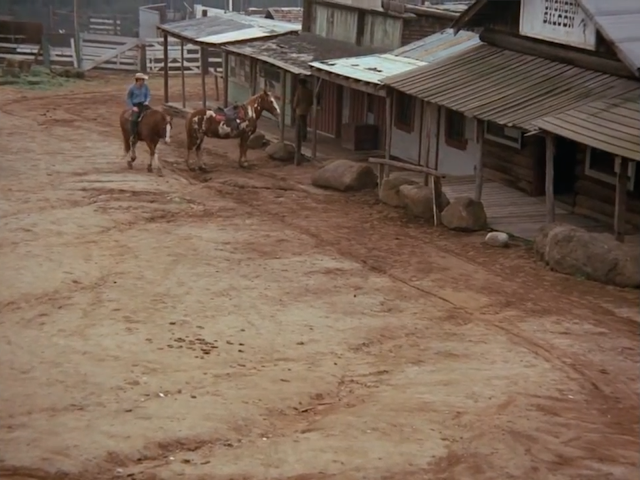 Shots of Spahn Ranch in the movies and on TV are relatively rare, and the shots in "Linda and Abilene" provide what may be the best color views we'll ever see of the Ranch's main set. 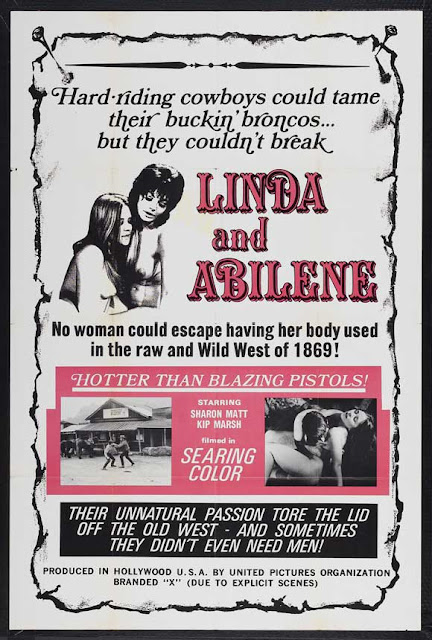 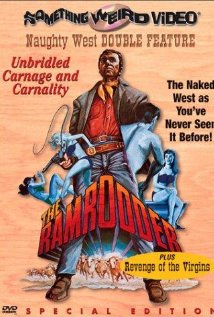 Westerns that fall into this category have their own label, although it remains relatively obscure: Naughty West. A number of Naughty Westerns were reportedly filmed on the Spahn Ranch — along with "Linda and Abilene," these include the early effort "Revenge of the Virgins," released in 1959, and "The Ramrodder," from 1969. 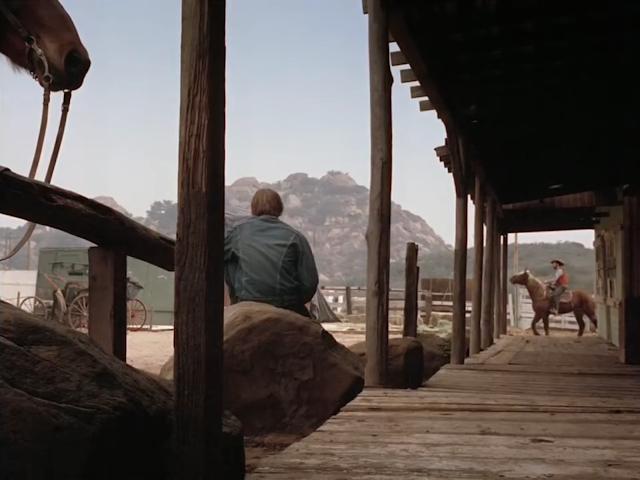 The racy elements aside, "Linda and Abilene" illustrates the importance of movies and TV in documenting historic filming locations. Even with all the press coverage Spahn Ranch received following the Manson killings, the location shots in "Linda and Abilene" help flesh out the record that exists of Spahn Ranch. 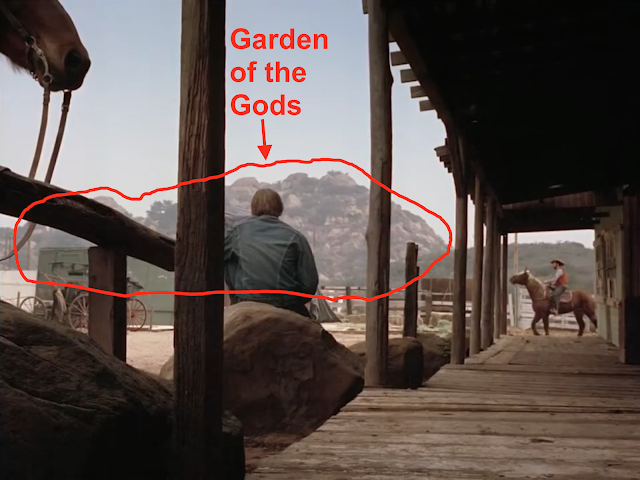 As a researcher focused primarily on the Iverson Movie Ranch, one of my favorite things about "Linda and Abilene" is that it includes a shot of its neighbor just across Santa Susana Pass Road. This shot from the movie provides a view of the southern end of Garden of the Gods on the Lower Iverson. 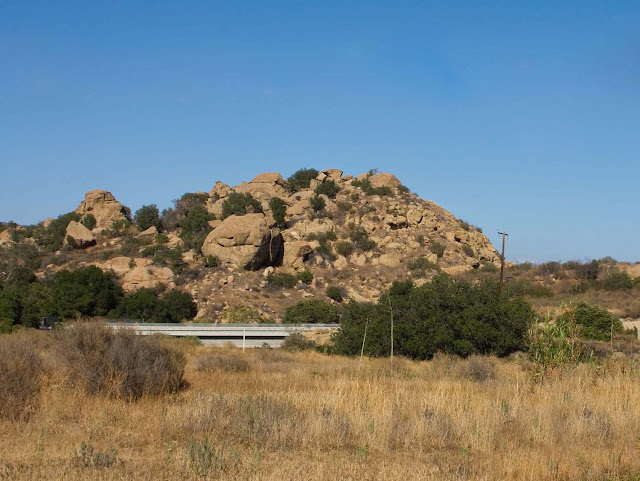 Iverson's Garden of the Gods, as seen from Spahn Ranch in 2015

A photo from earlier this year, taken by film historian Jerry Condit on a visit to the former Spahn Ranch site, captures almost the identical angle on Garden of the Gods seen in "Linda and Abilene" — minus the actors, horses, buildings and loose boulders. Santa Susana Pass Road is visible near the center of the frame. 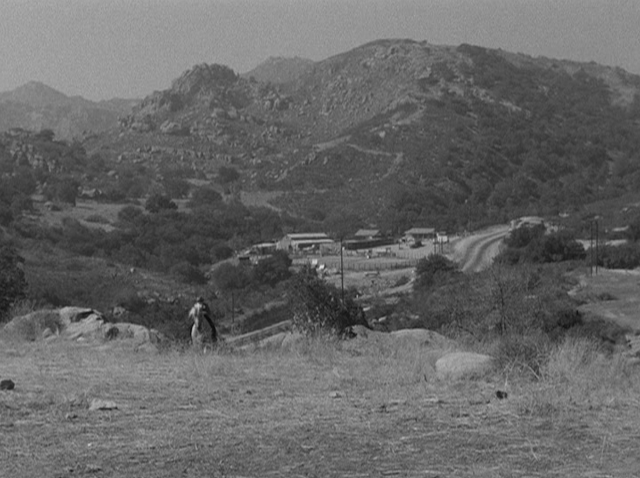 While Iverson could occasionally be spotted in the background of productions shot at Spahn Ranch, productions filmed at Iverson also at times captured the Spahn Movie Ranch in the background. The above example comes from the beloved Disney TV serial "The Adventures of Spin and Marty." 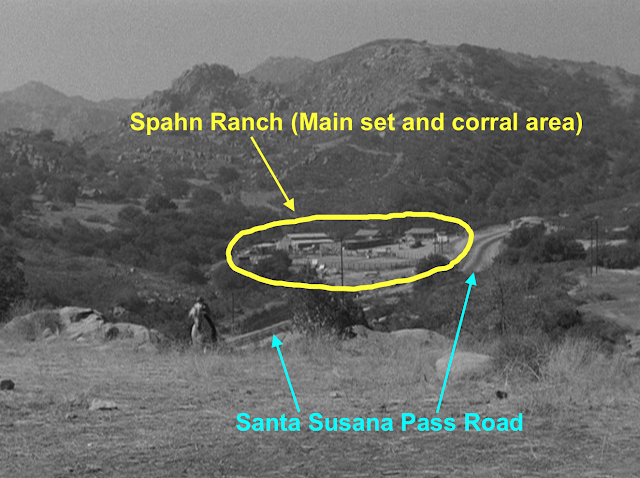 The shot is taken from just north of the main rock features of Garden of the Gods, and shows Santa Susana Pass Road in the background along with the main set area at Spahn Ranch, on the south side of the road. 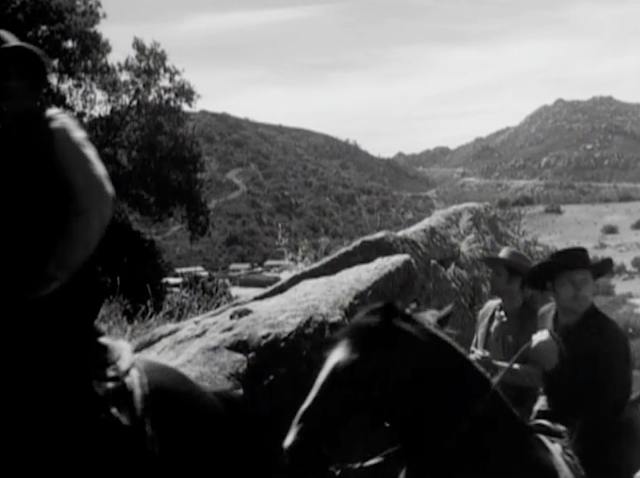 Another example of Spahn Ranch popping up in the background of an Iverson shoot can be found in the TV series "Have Gun — Will Travel." This shot is taken from an angle close to where the "Spin and Marty" shot was taken, near Garden of the Gods. 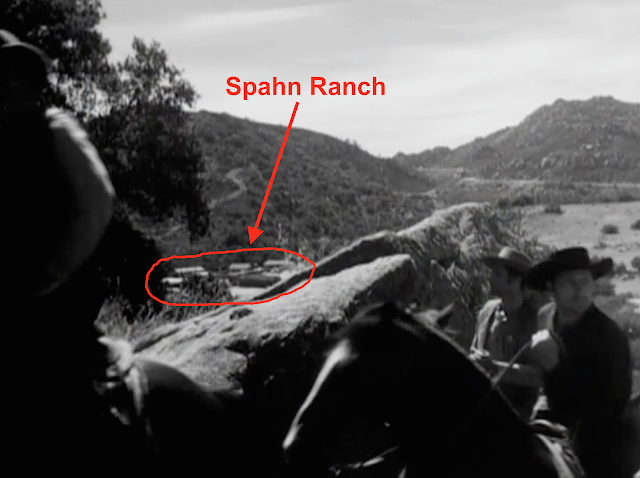 The shot comes from an episode called "Show of Force," which premiered Nov. 9, 1957, during the first season of "Have Gun — Will Travel." 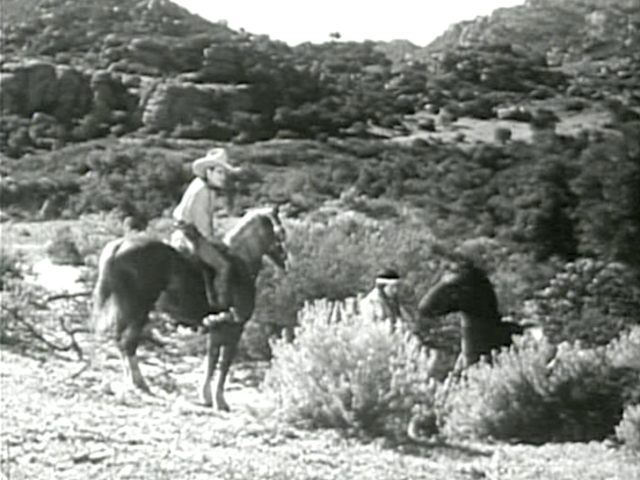 Even as far back as 1935, sections of what would become the Spahn Movie Ranch could be seen in Iverson productions. This shot from the old Tom Mix serial "The Miracle Rider," again taken from the Garden of the Gods area at Iverson, shows a distinctive plateau that would later be located just behind Spahn's main set. 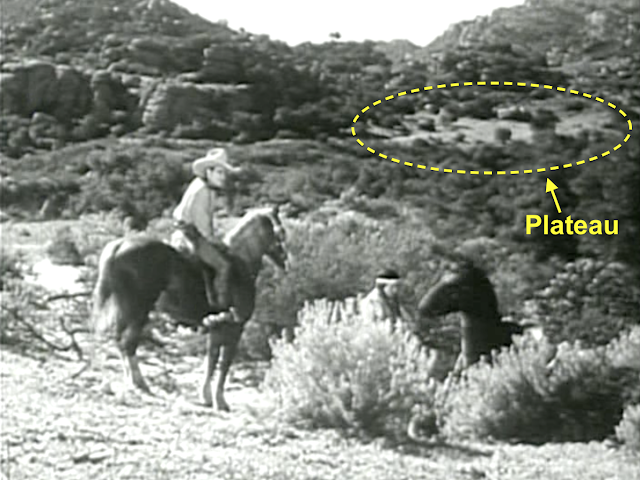 The plateau is highlighted in this version of the "Miracle Rider" shot. 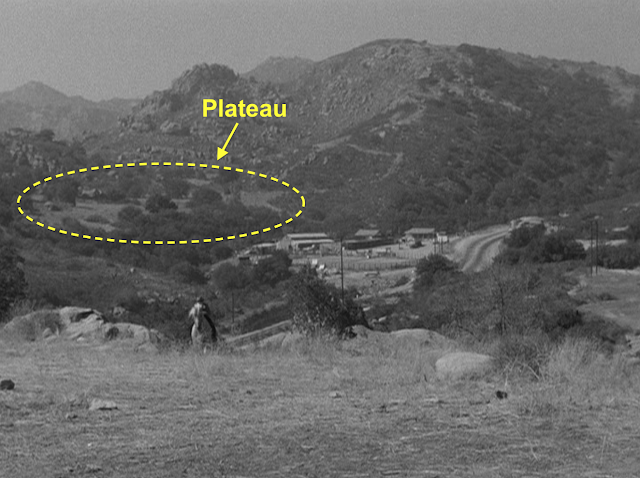 The same plateau can be seen again 20 years later in the "Spin and Marty" shot, and here it appears in context with Spahn's Western set and corral area, near the center of the frame. 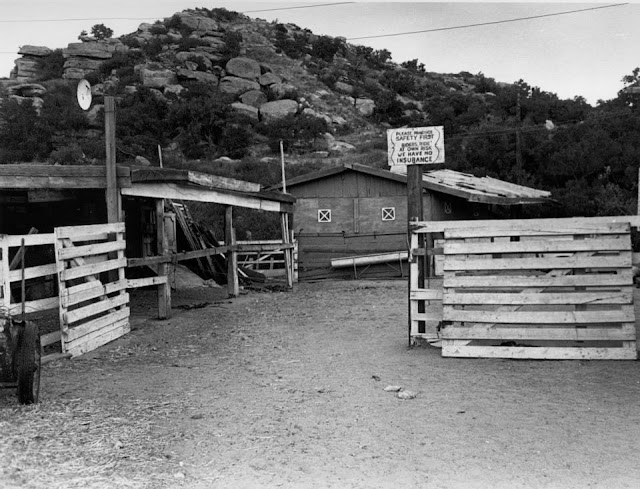 This shot of part of the corral area at Spahn, one of the many photos taken around the time of the murder investigation in 1969, provides a nice view of the rocky hill to the south of the main set area. While the hill has similarities to Garden of the Gods to the northeast, they're two different hills — one at Iverson and one at Spahn. 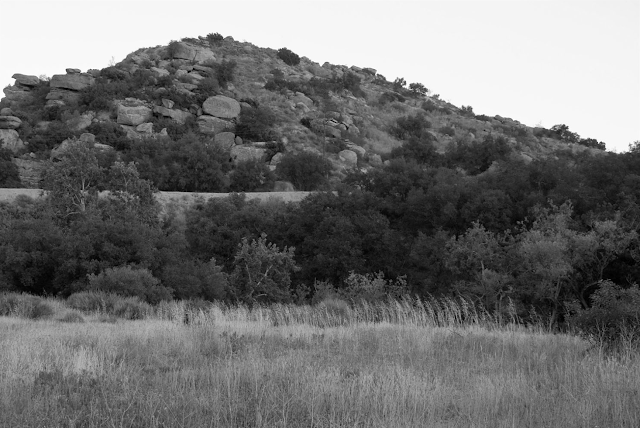 On a recent visit to the Spahn Ranch site, Jerry Condit snapped this photo showing what the area looks like today. With the photo reproduced in black-and-white, the similarity to the shot of the corral in 1969 is striking. The dry grassy area in the foreground is where the buildings previously stood. 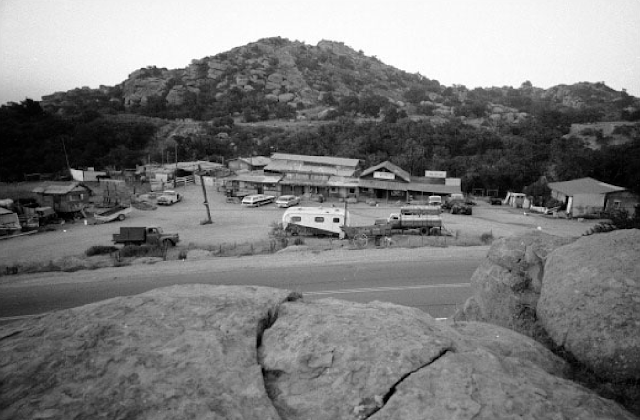 Another shot from around 1969 presents an overview of the main set area at Spahn Ranch. A nice feature of this shot is the rocks in the foreground, which are located north of Santa Susana Pass Road. 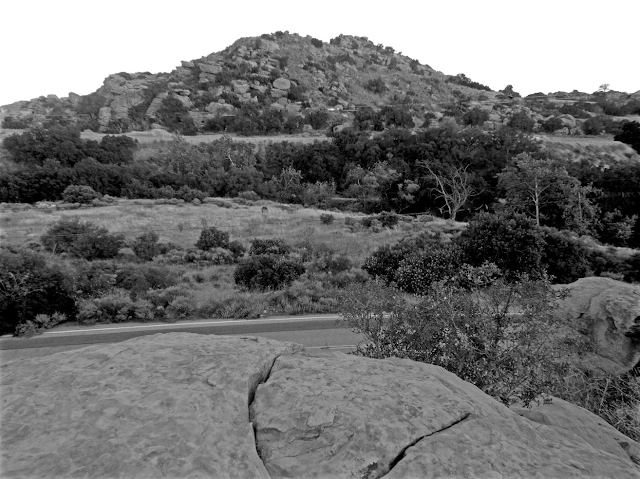 Jerry Condit took this shot from those same rocks during his recent visit, and here again, the shot nicely matches the photo from 1969 — including the rocks in the foreground. Today the foreground rocks are a part of the sprawling property owned by the Church at Rocky Peak.
Posted by Swami Nano at 3:11 PM

Thanks as always! You always amaze me with the perspectives you capture.
Mark Sherman

"flesh out the record". Bwahahaha!!!
I love the puns.
Rick

Tee-hee! Thanks for noticing ...

Have not read the entire site so I don't know if it's noted that the Spahn Ranch buildings burned completely in one of the areas regular fires in 1971 or 1972.

What a surprise! I've been searching for Spahn films since I got my first computer, yet found nothing. Your research and photos are fascinating, and I cannot thank you enough for the posting! All that remains is a 1961 Chevrolet Corvair, but it arrived long after the Manson events. PS: The brush fire that consumed the entire area was on September 25, 1970.

Please learn the definition of a crosswalk, traffic light and the difference between a motorhome, camper and a bus!