An obscure Iverson Movie Ranch rock gets its closeup, courtesy of the Dick Foran movie "The Cherokee Strip" 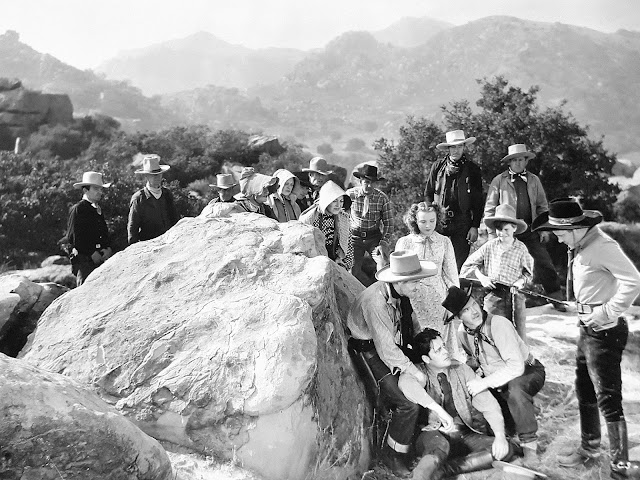 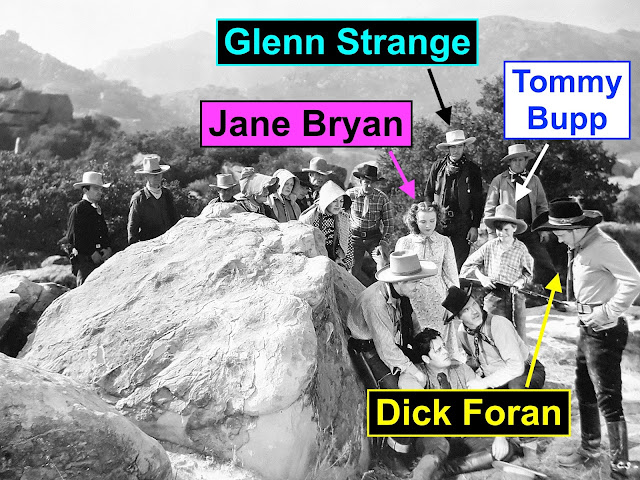 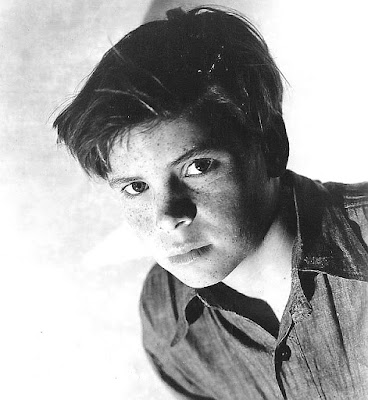 Tommy Bupp isn't exactly a household name, but he had a prolific career as a young actor. Bupp appeared in almost 100 movies from age 10 to 18, often uncredited, in a Hollywood career that spanned 1934-1942. 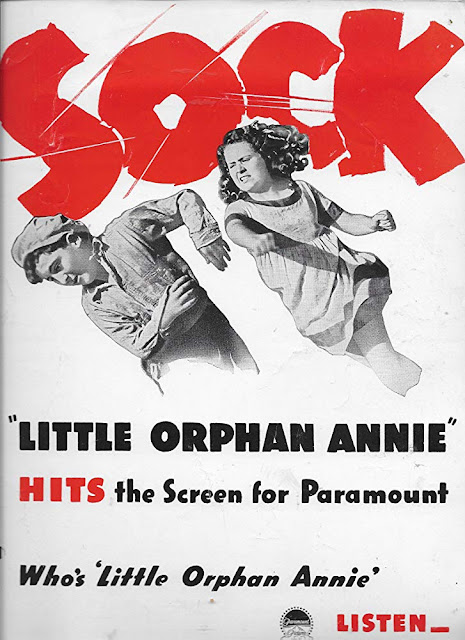 He even got punched out by a girl in the 1938 Paramount production of "Little Orphan Annie." The no-nonsense Annie was played by Ann Gillis, who was 11 at the time — three years younger than Tommy Bupp. 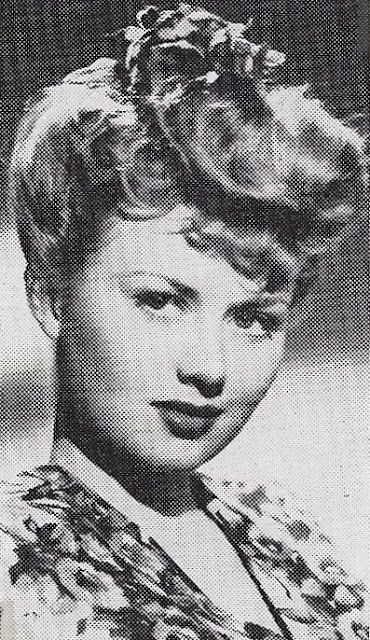 Gillis went on to a solid career of her own, although she pretty much packed it in at age 20 after a juicy role in "Big Town After Dark" in 1947. She followed up with a few TV appearances, including guest spots on "The Saint."

The piece de resistance when it comes to Ann Gillis trivia is that she made her final screen appearance as the mother of space voyager Dr. Frank Poole in the Stanley Kubrick classic "2001: A Space Odyssey."

That's Gillis, all right, celebrating her boy's birthday with help from HAL. We rarely manage to work Kubrick references into this blog, so I wanted to get this one in even if it's a couple of degrees of separation. 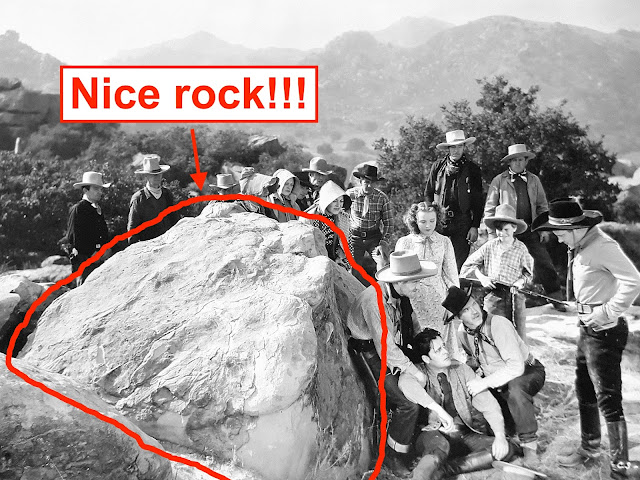 Getting back to 1937 and "The Cherokee Strip," the elephant in the room is this impressively rumpled rock. 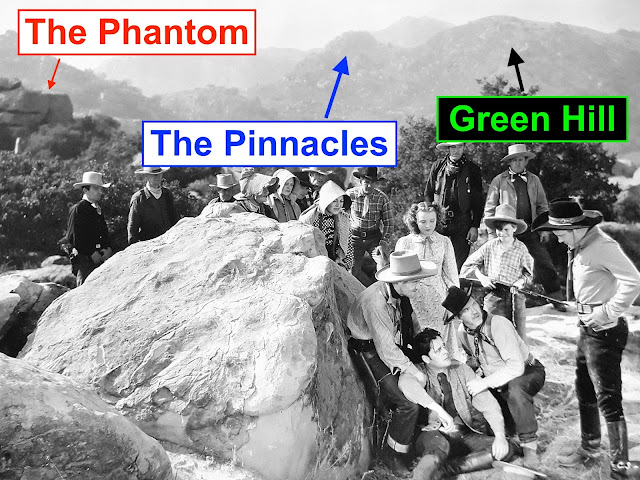 The background features pinpoint the rock's location, suggesting it should be easy to find. But I have to admit I didn't recognize it from the promo still — even though I knew I'd probably hiked past it countless times. 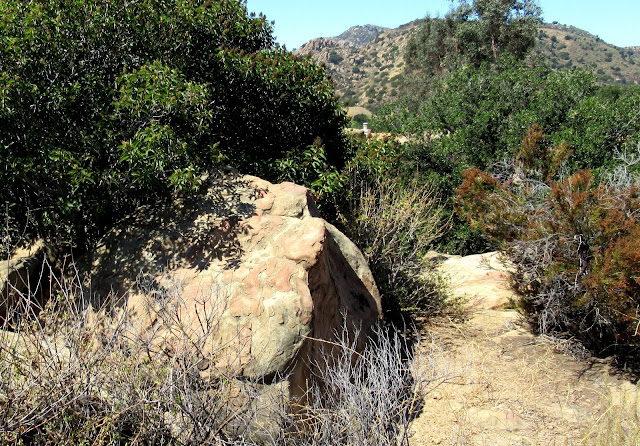 The same rock on a recent visit to the site

As it turns out, the rock today is largely hidden behind foliage and dry brush. Even so, it's right where it's supposed to be, and as these things go, it was indeed easy to find. 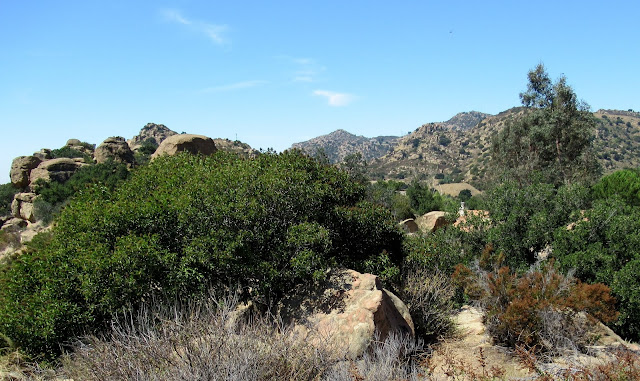 Many of the background features can no longer be seen from near the rock, due to the heavy foliage. 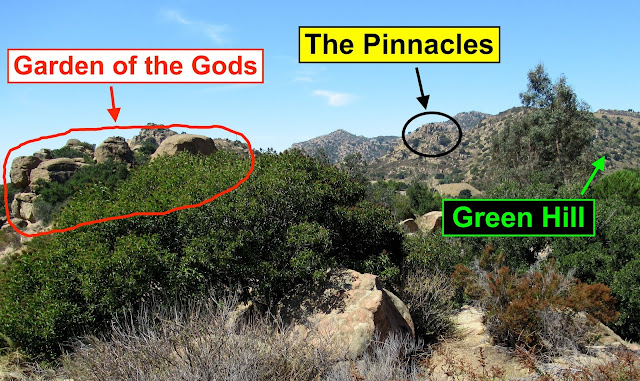 But it's still possible to spot the Pinnacles and Green Hill to the west, and the towers of the Garden of the Gods to the south help fix the location of the rock. 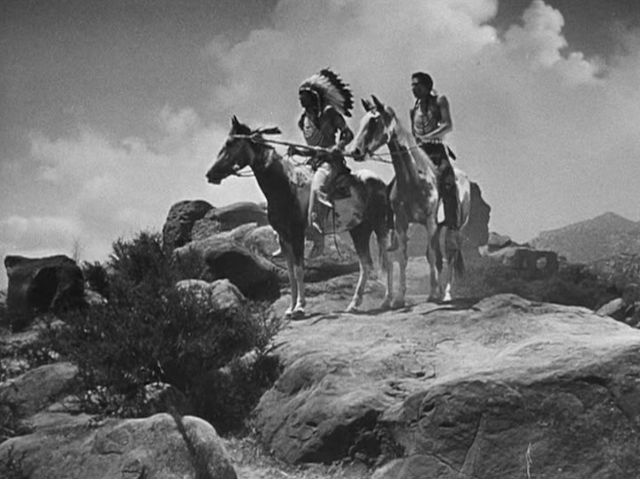 The rock is situated in the Footholds area, which we explored in depth back in 2015. Click here to see our original post about the area, examining the many hand-carved footholds that have been uncovered at the site. 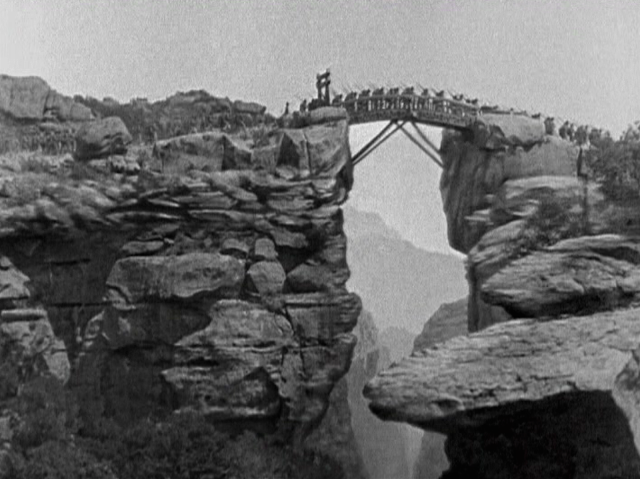 "Tell It to the Marines" (1926): The incredible Chinese bridge sequence filmed in the Footholds area

A second post about the Footholds area, breaking down its role in an elaborate Chinese bridge set built for the silent feature "Tell It to the Marines," can be found by clicking here. 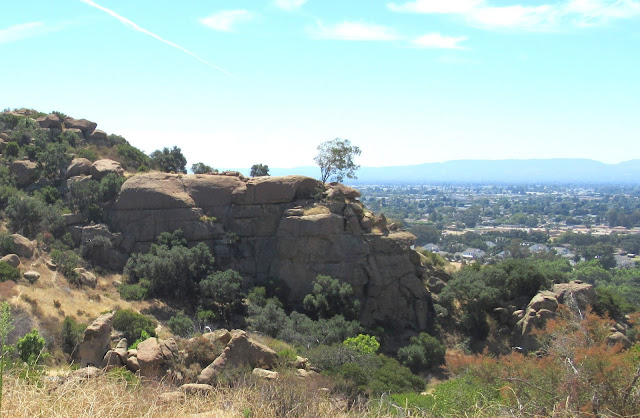 The view from the "Cherokee Strip" rock — looking east

If you're facing the "Cherokee Strip" rock, you can turn around and see this nice view of Nyoka Cliff on the east side of Redmesa Road, along with a section of the West San Fernando Valley. 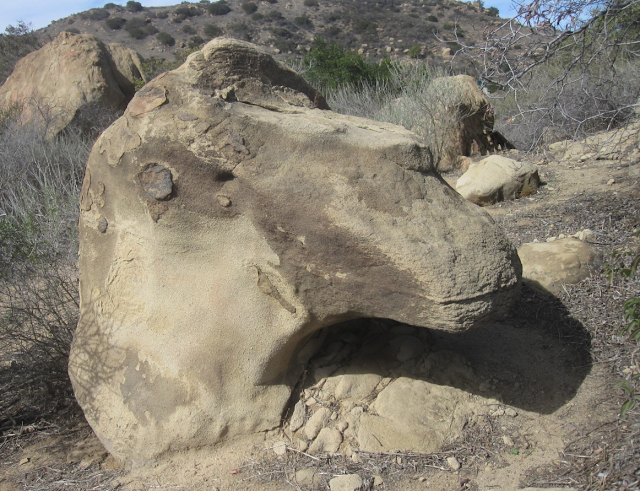 Also right near the rock is a rock that looks like either a camel or a trachodon. 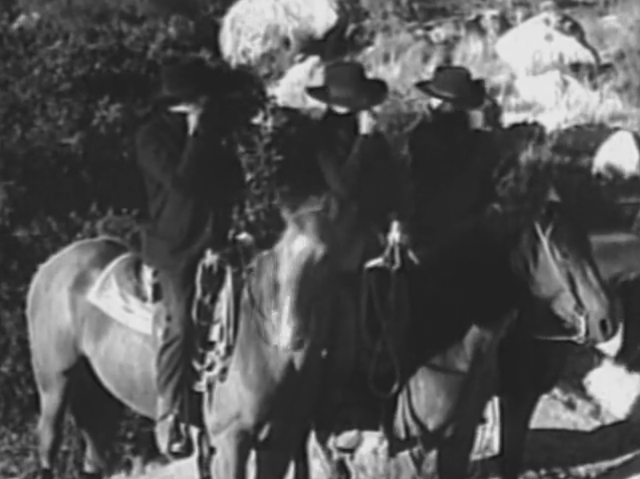 The trachodon rock is rarely seen in movies, but it did make an appearance in the Range Busters B-Western "West of Pinto Basin." You may be able to make it out in the top right corner, looking kind of like a rooster. 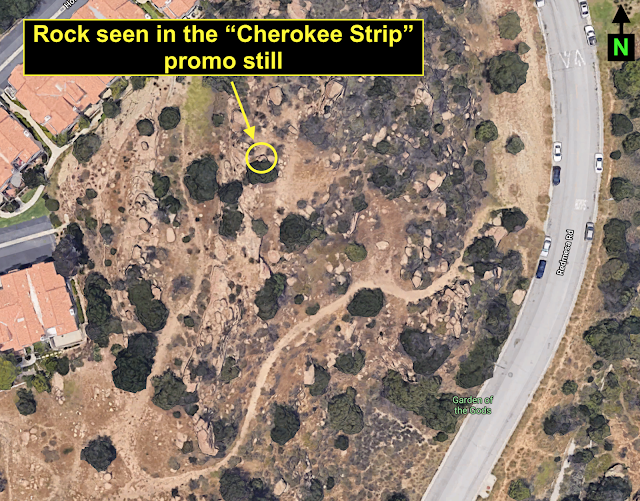 A Google aerial photo shows the location of the "Cherokee Strip" rock. It's near the Cal West Townhomes, but it's located on property that has been preserved as public parkland. 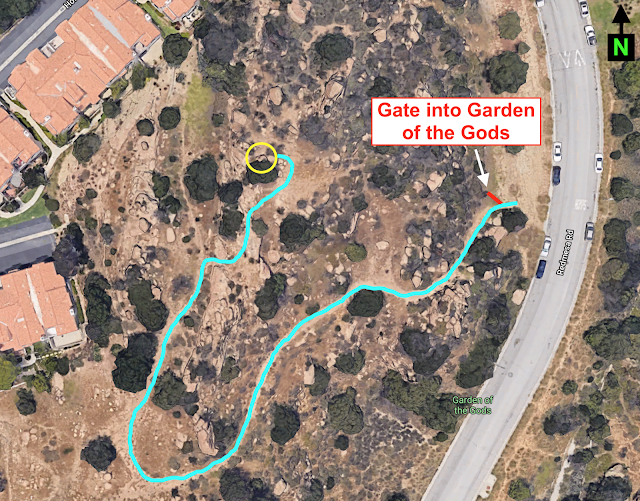 If you can find your way to Redmesa Road in Chatsworth, park near the blue-green gate at the trailhead into the Garden of the Gods. Take the trail to the top, turn right and work your way into the Footholds area.
Posted by Swami Nano at 6:52 PM