Guess where the "Star Wars" series "The Mandalorian" has been shooting — right here in the Santa Susana Mountains! 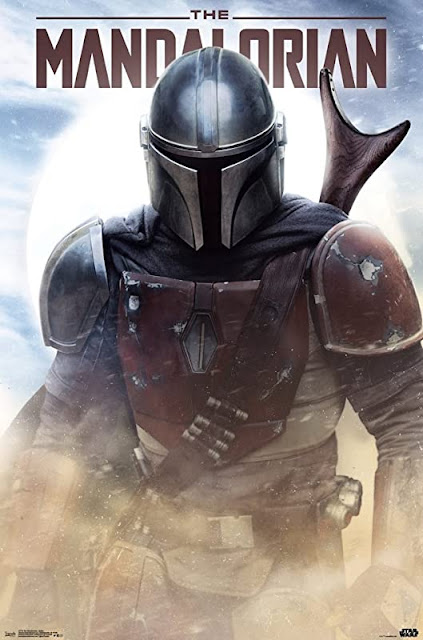 "The Mandalorian": The latest disturbance in the Force

The tourism industry in the Santa Susana Pass may be in for a boom in the near future, because we just nailed down a filming location that fans of the "Star Wars" series "The Mandalorian" have been eager to find — and it's right here in the Santa Susana Mountains, tucked away between Chatsworth and Simi Valley. 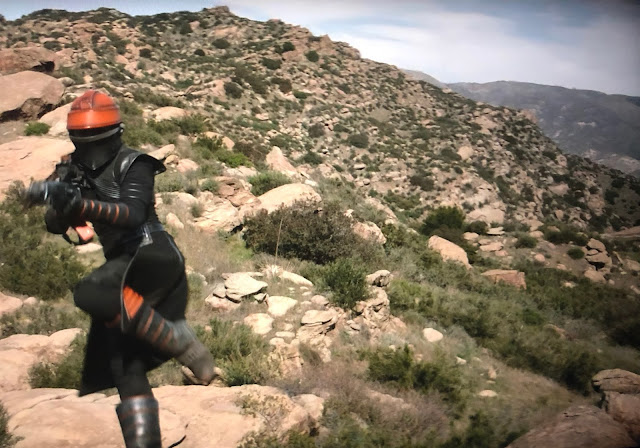 I received the above screen shot from the recent episode "The Tragedy" from "Mandalorian" fan Scott Lechuga, who asked whether I might recognize the location. I didn't, but I did recognize the look of the "Chatsworth Formation," a geological phenomenon that runs through the former Iverson Ranch and much of Chatsworth. 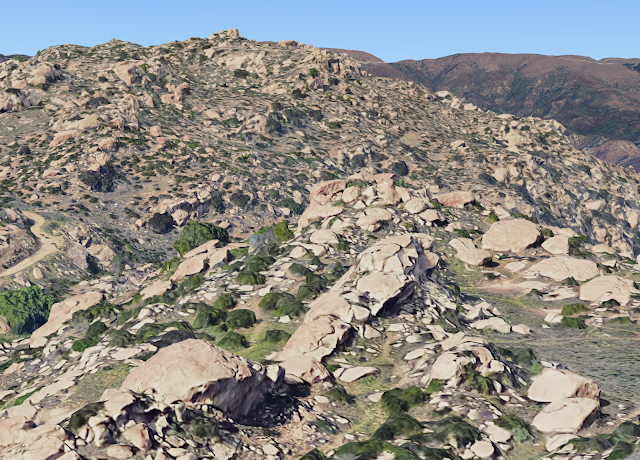 The same location as it appears on Google Maps

After some poking around, I was able to match up the ridgeline seen in the "Mandalorian" screen shot. The filming area was along the Rocky Peak Trail, northwest of Chatsworth. 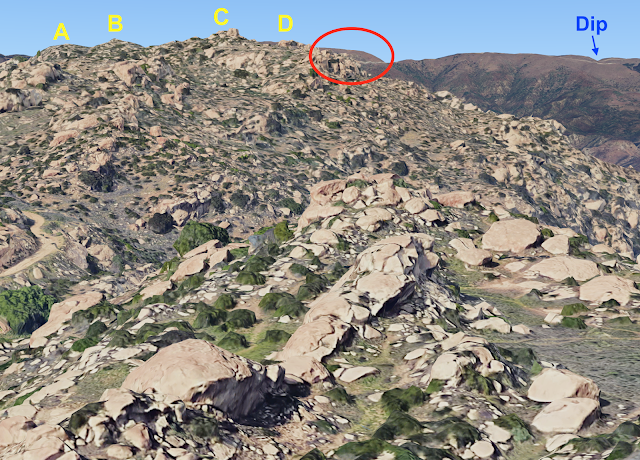 Identifying features in the ridgeline

Some of the markers along the ridgeline that help identify the location are noted here. 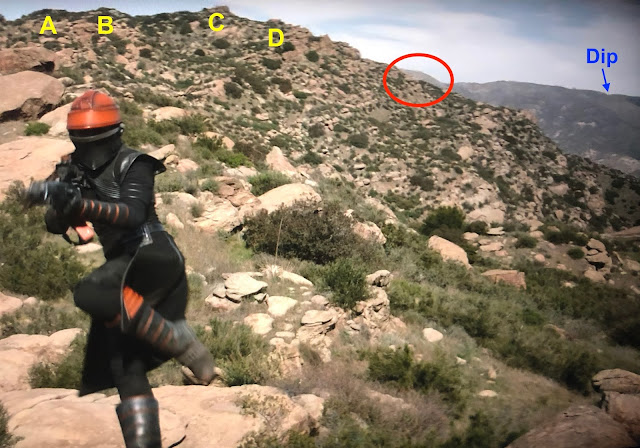 The same features can be found in "The Mandalorian"

Here are the same markers in the "Mandalorian" screen shot. The alignment is slightly off because it's impossible to duplicate the angle on Google Maps. But it's close enough that you should be able to tell it's the same place. 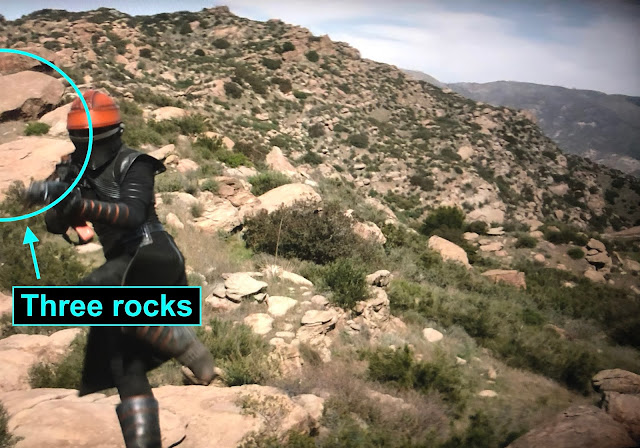 Closer to the ground, we can find additional markers that also match up, enabling us to further define the filming location. Notice the group of three rocks highlighted here. 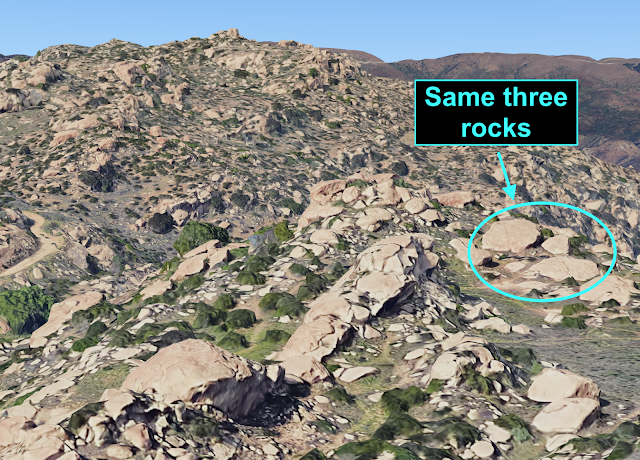 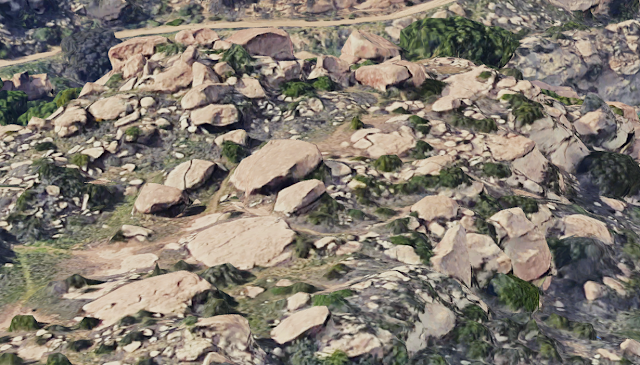 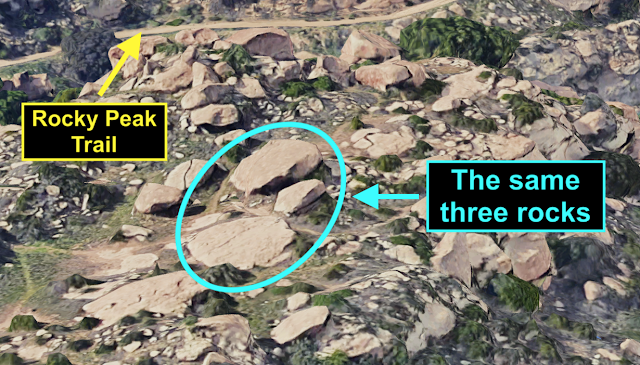 The shooting location is just off Rocky Peak Trail
The shot more closely matches the action on the ground in the "Mandalorian" screen shot, although again it's not exactly the same angle. 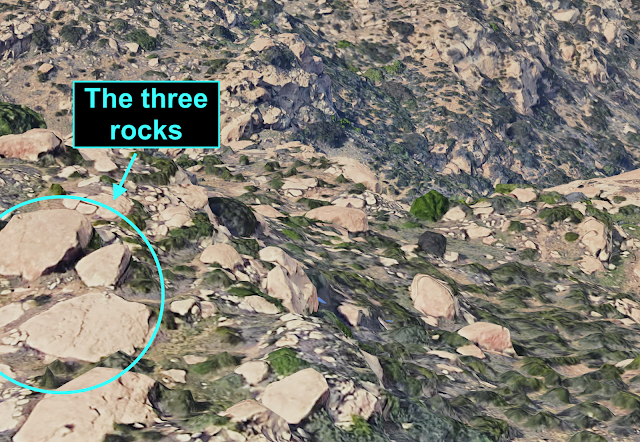 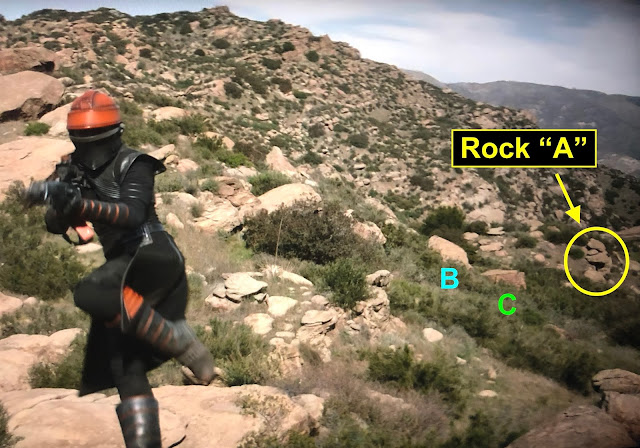 One of the more distinctive rocks in the "Mandalorian" shot, Rock "A"

One rock in the "Mandalorian" screen shot that cries out to be found is Rock "A," which almost appears to be wearing a helmet out of "Star Wars." Also note Rocks "B" and "C." 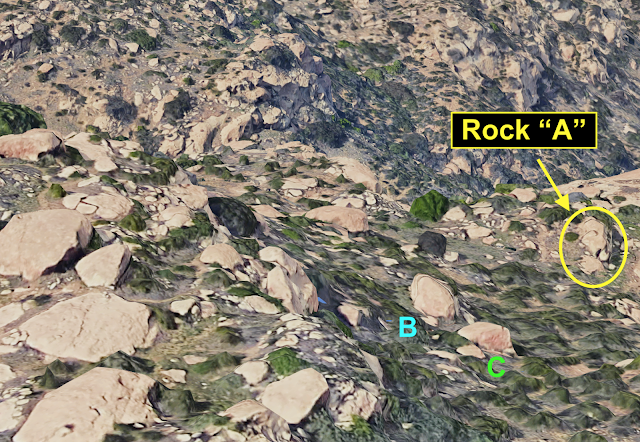 Rocks A, B and C on Google Maps

Even though Rock "A" is not as well defined in this Google Maps shot as we might want it to be, it's clear that it matches "The Mandalorian," as do Rocks "B" and "C."

"The Tragedy": Stormtroopers romp around Rocky Peak Park
Here's a shot from "The Mandalorian" showing some Stormtroopers up to no good in the mountains. This shot can be matched up with photos from the Rocky Peak filming location. 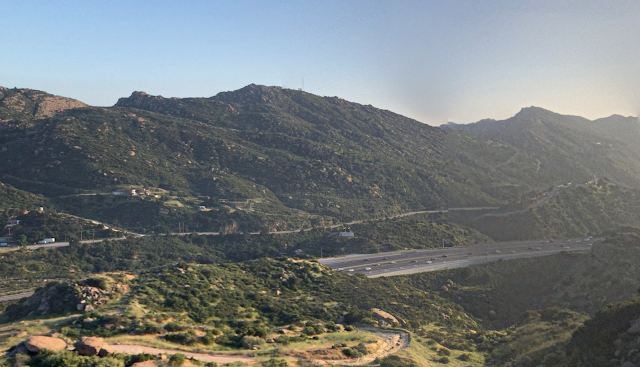 The same background hills, viewed from the Rocky Peak Trail
This photo shows the view to the southwest of the filming site, including the 118 Freeway and, beyond it, Santa Susana Pass Road, running across the frame horizontally. 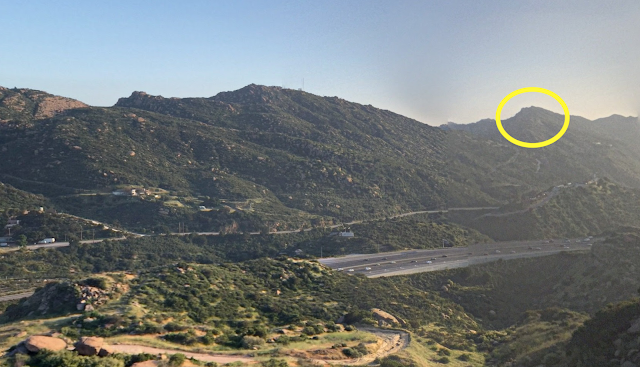 The same hill can be seen in the "Mandalorian" shot. 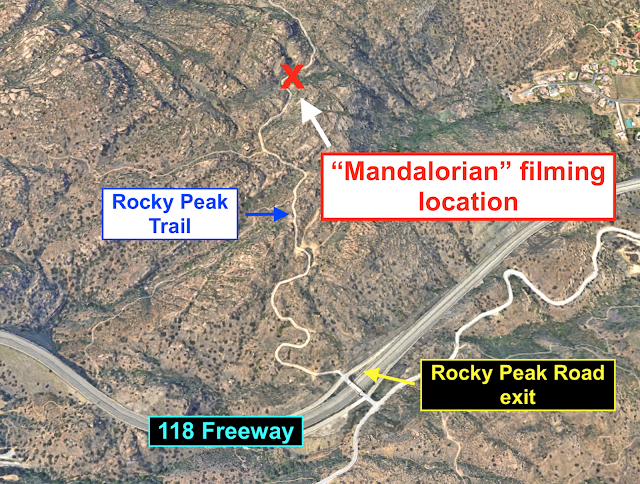 Filming area for "The Mandalorian"

The "Mandalorian" shooting area is located well up the Rocky Peak Trail, as indicated here. If you're planning to go check it out, be forewarned that the trail is like straight up —  bring water and a strong pair of legs. 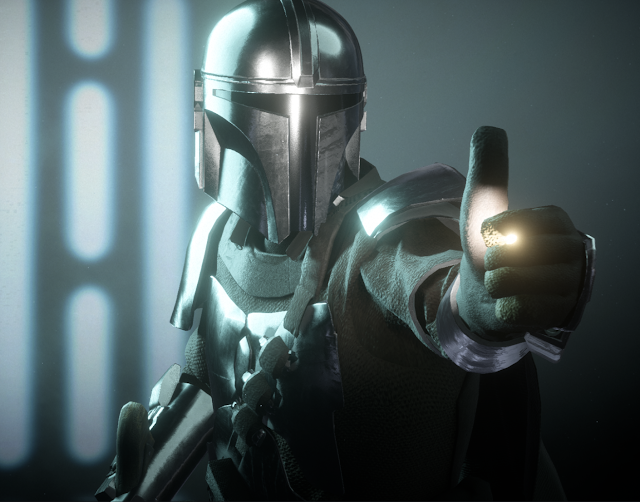 Thumbs-up, Scott!
I want to give a big shout-out to Scott Lechuga for getting the ball rolling on what turned out to be a fun location hunt — and a fruitful one!
Since we first published the filming location in December 2020, a number of "Mandalorian" fans have been making the trek to the site and are posting videos and photos that expand on the sighting. One of the best can be found below — a YouTube video first posted by All About Los Angeles — check it out!
Posted by Swami Nano at 6:19 PM

I knew right away watching Mandalorian episode 14 with those big beautiful rock formations that it had to be somewhere between Chatsworth and Simi but couldn’t quite place it. Disney keeps all their Star Wars shoots top secret Dennis so great job pinpointing those locations out there sir!

Thanks, Scott. We needed some "Star Wars" around these parts, since we were already deep in "Star Trek" and "The Orville" -- not to mention all the old "Radar Man" movies. I appreciate your help tracking it down.
-SN

Thanks for posting! Do you know where the exact location is for the battle scene from Mandalorian Season 2, Episode 6: The Tragedy?

Thanks for your comment, Mando Fan. Yes, the battle site has been figured out. The first thing I would do is get your bearings by checking out the "X marks the spot" in the map above - it's near the end of the post. If you can get to that spot, you will be at the filming location.
The Mando shoot was actually spread out along the trail, so you don't necessarily have to go all the way up to the X, depending on how much of it you want to see.
You might also check out the excellent video at the end of the post, which I've added since you left your comment. It was posted by the All About Los Angeles YouTube account, which I think is the work of Shaun EePeez, who has also been actively posting material on Facebook.
Shaun is part of a group of location fans and Mandalorian fans who are also occasional collaborators with this blog, including Bruce Murdock. Along with David Broido, the team made the trek up Rocky Peak Trail soon after we published the location here. They're all active on the Facebook page "All About Filming Locations" (https://www.facebook.com/groups/allaboutfilminglocations), which is another good place to go to find details about the Mandalorian filming location — along with plenty of other interesting stuff.