Update (April 12, 2014): I've done a more recent, updated version of this post, which you can read by clicking here. The older version below remains pretty much as I originally published it, and contains some information that didn't make it into the newer post. But in my opinion, if you had to pick one or the other as the place to start ... I'd go to the newer post. (Again, click here to go to the newer post.)

Film location researcher Bill Sasser tipped me off about a 1947 movie called The Millerson Case, part of a series of Crime Doctor movies from Larry Darmour Productions starring Warner Baxter, originally distributed to theaters by Columbia. The series is usually set in the big city, and so it rarely ventures into rustic Iverson territory. But in this installment the lead character goes on a hunting trip and finds himself in a small country town called Brook Falls — played by Iverson's Western street, sometimes called El Paso Street or Iverson Village. 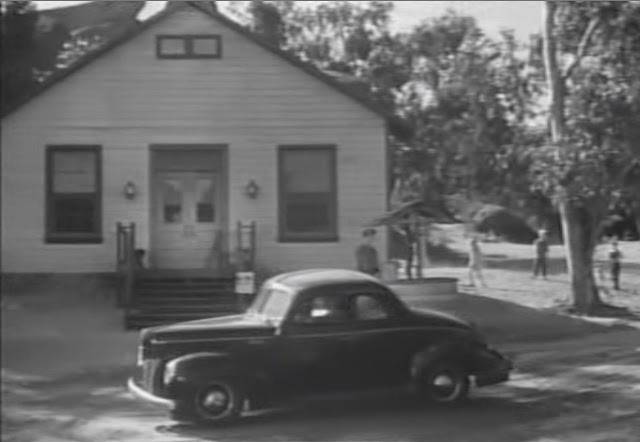 Among a number of important finds in this movie is probably the first film appearance of what would become the Iverson Church. Tracking the release dates of movies in which the church appears — and there are only a few of them, all released from 1947 to 1949 — I've become convinced that the church was built specifically for The Millerson Case, which came out in May 1947, a couple of months before its next known film appearance — in the Hopalong Cassidy feature The Marauders — and a few months before the church would make the first of what are probably its most commonly seen appearances these days, in a string of PRC-produced B-Westerns starring Eddie Dean and Lash LaRue. 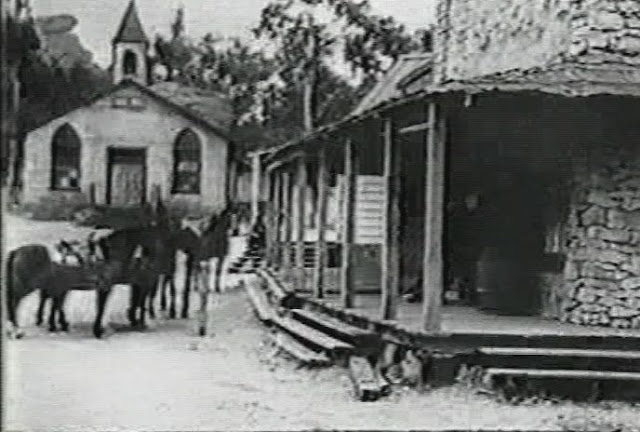 The most surprising twist in the story of the church is that when it was first built, it wasn't a church. It was a schoolhouse. It was subsequently modified to make it look like a church — with arched tops added to the two front windows and a taller turret, complete with arched window, replacing the bell tower, transforming it into a steeple. Above is a slightly askew shot from one of the late 1947 to early 1949 B-Westerns from PRC or its spinoff, Western Adventure, showing the church as a church. The tall rock to the left of the steeple, also visible in the top photo, is known as Church Rock, obviously because of its proximity to the church. 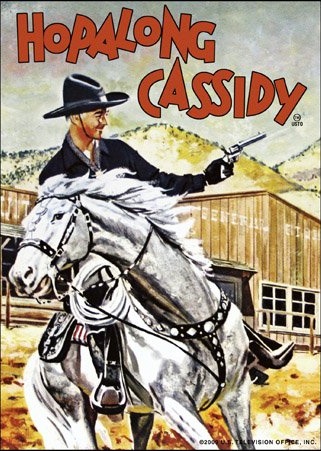 Location expert Tinsley Yarbrough offers what seems to be the most plausible explanation for the transformation of the schoolhouse into a church: It was probably undertaken by United Artists for The Marauders, where the building again plays a major role, this time as a church. Since I first published this post I had a chance to see The Marauders, and I can confirm that the movie is set almost entirely in and around the church. I agree with Tinsley that in all likelihood the producers of that Hopalong Cassidy movie were the ones who transformed the schoolhouse into a church — and it retained that identity for the remainder of its short life. 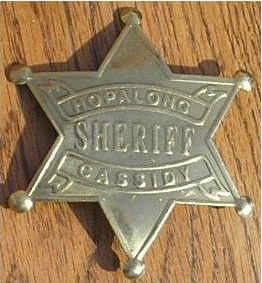 My original theory was that PRC had something to do with the construction of the church, but PRC was notoriously low-budget, and now that the Crime Doctor and Hoppy movies have surfaced with their more meaningful use of the building, that theory can be put to rest. I find it interesting too that once PRC begins shooting in the area — and the company was there a lot from 1947-1949, with Eddie and Lash — the church is always there, in the background, but it's never brought to the foreground or incorporated into the story. 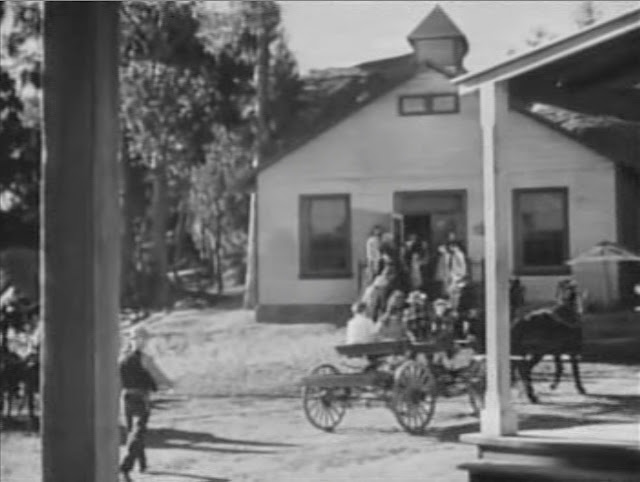 Here's another shot of the schoolhouse in The Millerson Case, giving a better look at the original turret or bell tower. The schoolhouse plays a central role in the plot of the movie — as headquarters for treating an outbreak of typhoid fever. The building is featured far more in The Millerson Case and The Marauders than in any other movie I've seen. 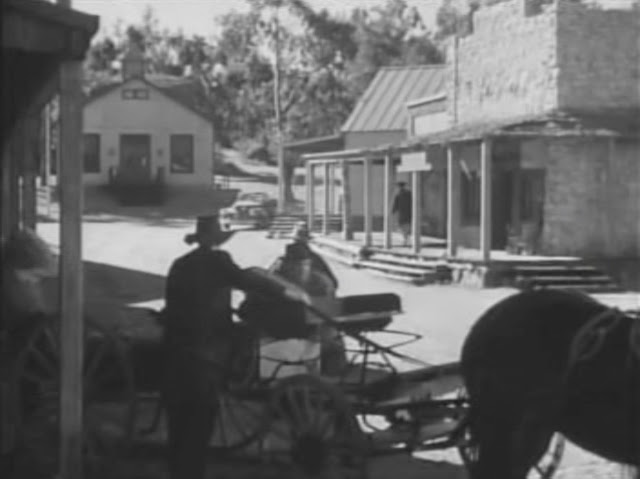 Here's one more view of the schoolhouse in The Millerson Case, with a portion of Iverson Village also seen. The building on the right can easily be matched with the second photo, after the schoolhouse down at the end of town became the church down at the end of town. Note that horse-drawn carts and more modern vehicles such as the stylish coupe in the top photo coexist in the small country town depicted in The Millerson Case.