I recently took an in-depth look at director John Ford's landmark 1939 Western "Stagecoach," much of which was filmed on the Iverson Movie Ranch in Chatsworth, Calif. The movie has been a source of confusion and, I think, some misconceptions, especially regarding the construction of sets. I was able to sort out a number of these details this time by going over the movie carefully. 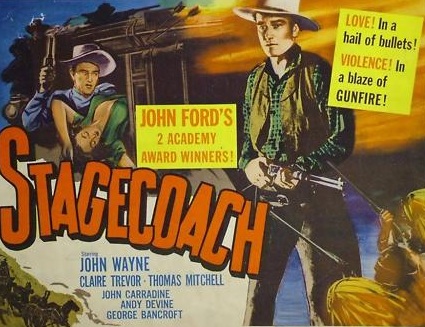 "Stagecoach" contains three main locations represented by sites at Iverson, and they are essentially stops along the stagecoach journey that is the central plot element in the movie. Here are the Iverson sites in the order in which they appear in the movie and along the stage route: 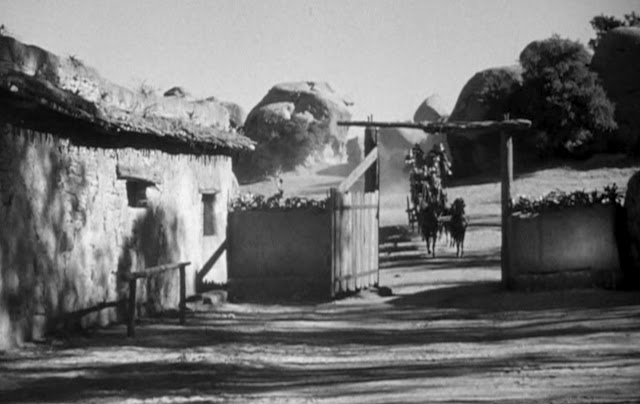 Dry Fork is represented by a single-story adobe building at Sheep Flats, west of Hook Rock. Sheep Flats is the area now occupied by the Indian Hills Mobile Home Village, located on Topanga Canyon Boulevard just south of the 118 Freeway. In the above screen shot, Hook Rock is seen near the center of the photo, above the wall and between the stage and the adobe building. Adjacent to the building are a low adobe wall and a wooden gate, through which the stage arrives. This wall and gate are of a similar design to a different wall and gate seen at the next stop along the journey, Apache Wells. 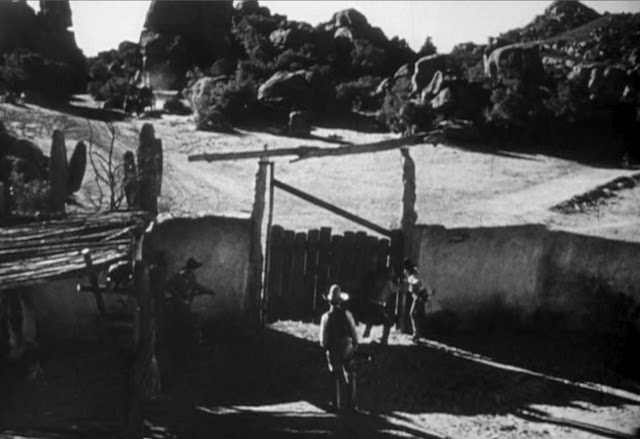 Apache Wells is depicted only by a wooden gate and adobe wall, as seen in the above screen shot. The set was situated northwest of Garden of the Gods, and is the site of a famous stage arrival sequence with the iconic Garden of the Gods figures (Indian Head/Tower Rock and Eagle Beak/Sphinx) in the background. One of my misconceptions — at least, I now think it was a misconception — was that an actual building was constructed here for Stagecoach. I realized this time around that there is no such building. There are a few shots of an adobe that appear during this sequence, but these look like a studio construction to me. Here's a glimpse of that adobe behind the stage: 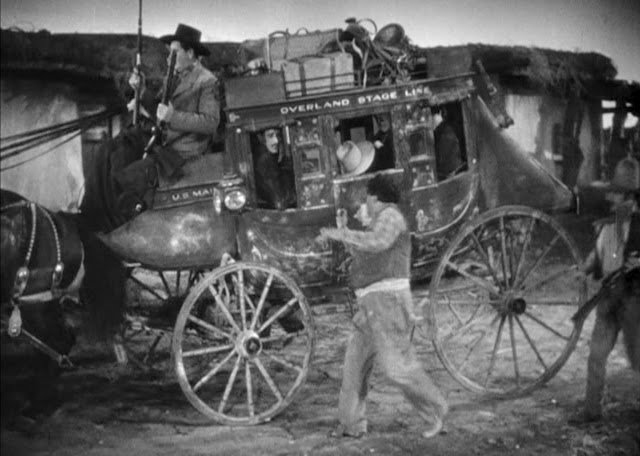 Again, I believe the above shot was taken in a studio. Among the visual clues, the background and lighting look like a studio shot. Another clue is that the set is always cut to and cut away from, rather than shot with the rest of the scenery associated with Apache Wells. Even if it is shot on location, there is nothing to indicate that the location is in fact at Iverson. It's worth pointing out that the appearance of this adobe is similar to the appearance of the adobe seen earlier as the Dry Fork way station (see photo above), which was an actual location set built at Sheep Flats. This similarity echoes the similarities in the gates and walls for the two locations. I'm not sure what it means, but maybe the producers were keeping things similar in appearance so they could interchange them if needed — in much the same way that low-budget cowboy stars always wear the same outfit so the footage can be used again and again. 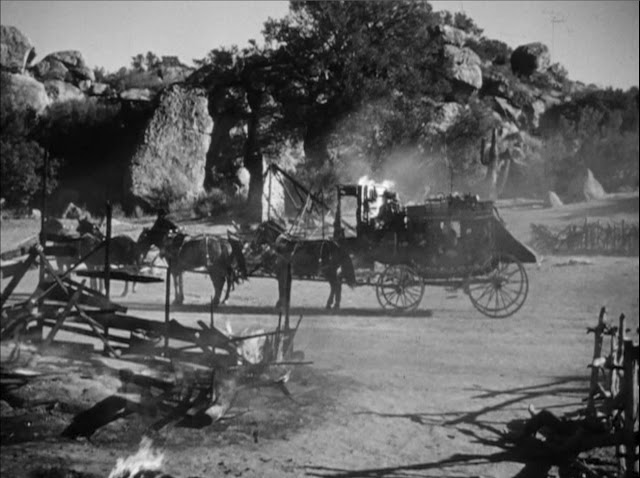 Lee's Ferry has been burned out in an Indian attack by the time it appears in the movie. As with Apache Wells, no actual building was constructed for this location. However, an elaborate set has been created to represent the burned remains of the Ferry station. The location for this set is pretty close to Batman Rock, which appears in the shot below. Batman is the large rock at top left that looks like an Indian head. In fact it looks more like an Indian Head than any of the four rocks at Iverson that have been called "Indian Head" — it looks as if it just came off a buffalo nickel. It got the name Batman because of its appearance in an early Batman serial. The set for Lee's Ferry is north and a little bit west of Batman Rock, placing it in close proximity to the set (gate and wall) for Apache Wells. I would say Apache Wells is southwest of Lee's Ferry, but that's a rough approximation. 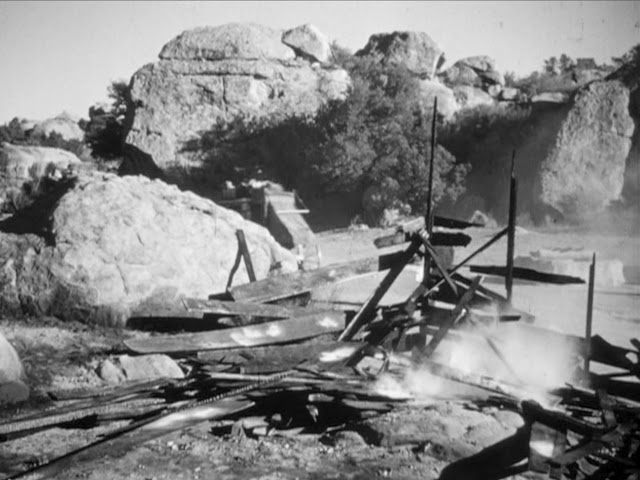 Lee's Ferry is introduced with a pan shot I've always liked, following the stage as it arrives and slowly revealing the destruction. Early in this pan we see a triple-stacked rock that is obviously fake: 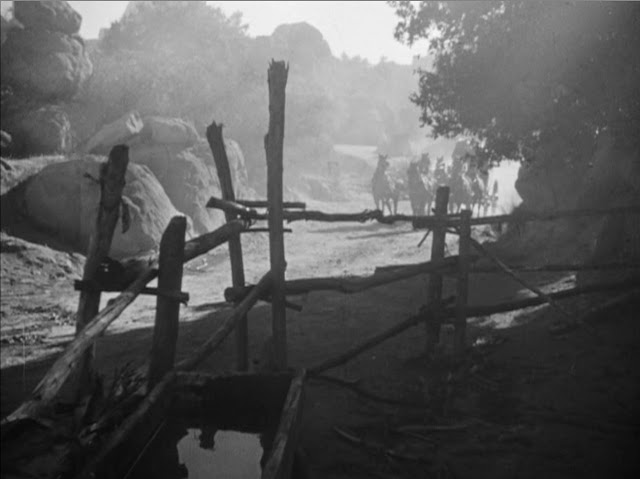 The triple stack is in the top left corner of the above shot. 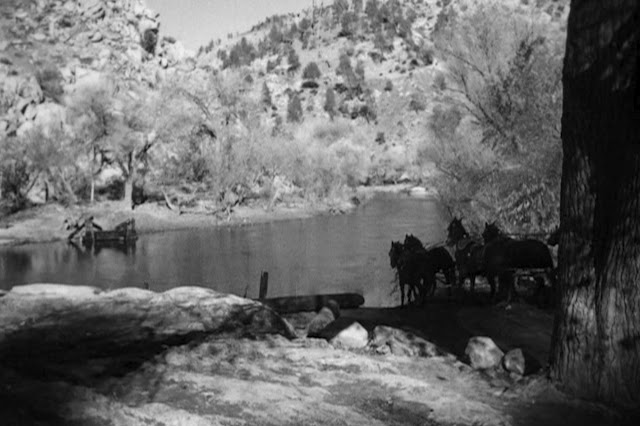 After the pan showing the remains of Lee's Ferry, the movie quickly cuts to Kern River (above), which is consistent with the kind of "cutting and pasting" Ford does throughout, notably interspersing Iverson and Monument Valley. 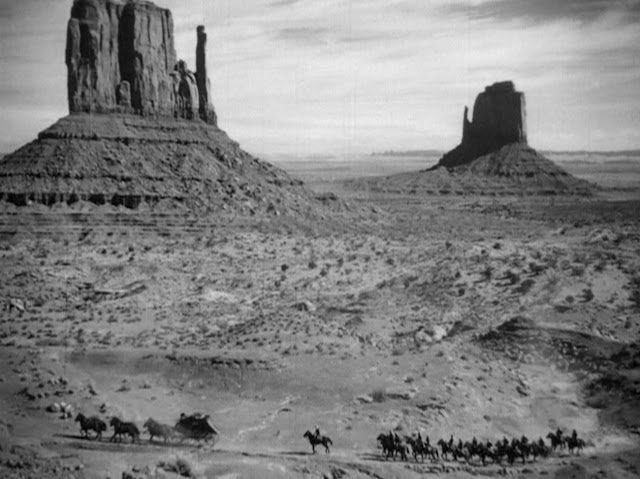 A number of other shots of Iverson also appear in the movie, but these are generally minor items in the movie. Among them is a brief shot of Hole in the Wall, a feature of the Upper Gorge, just off Redmesa Drive. In the movie it has "smoke signals" coming from the top of it: 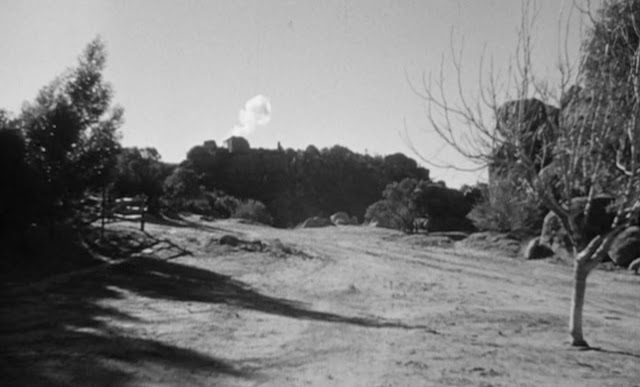 Another Iverson feature seen in "Stagecoach" is Hawk Rock, which appears in a brief scene with three mounted riders, Native Americans, descending below it. The rock is shown from an unusual angle that would make it hard to recognize if one hadn't walked along the sidewalk on Redmesa Drive and looked up at Hawk Rock from a bit south of it, which reveals that exact same angle. I've discussed this previously, in an entry about Hawk Rock that can be found by clicking here.