Another look at the 1952 aerial photo of Iverson

This is an update on an old blog entry, which you can still see by clicking here, in which I posted about the 1952 aerial photograph of Chatsworth that includes the Iverson Movie Ranch. 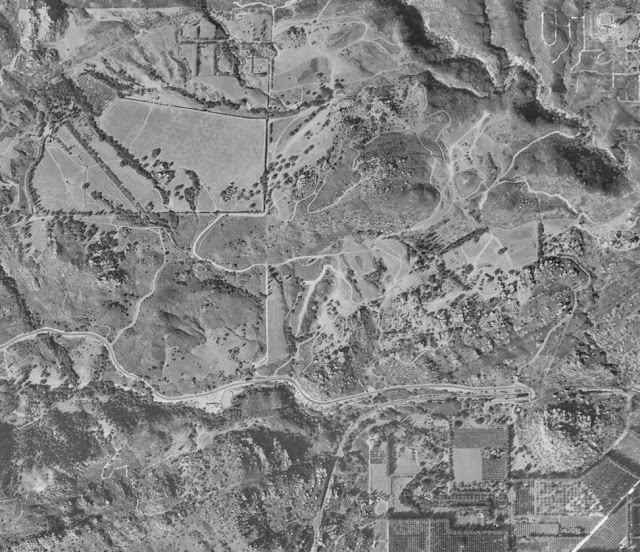 1952 aerial view of the northwest corner of Chatsworth, Calif.

I hope the version shown here expands on what I posted previously. The above photo is essentially the same 1952 aerial photo used as the basis for the earlier post, but the scope is wider here, and additionally some of the features may be more clear here. (You may want to click on the photo to enlarge it, as it enables you to see it in more detail.) The earlier post is still worth checking out, especially for the Lower Iverson features that have been labeled by Iverson researcher John Emmons. 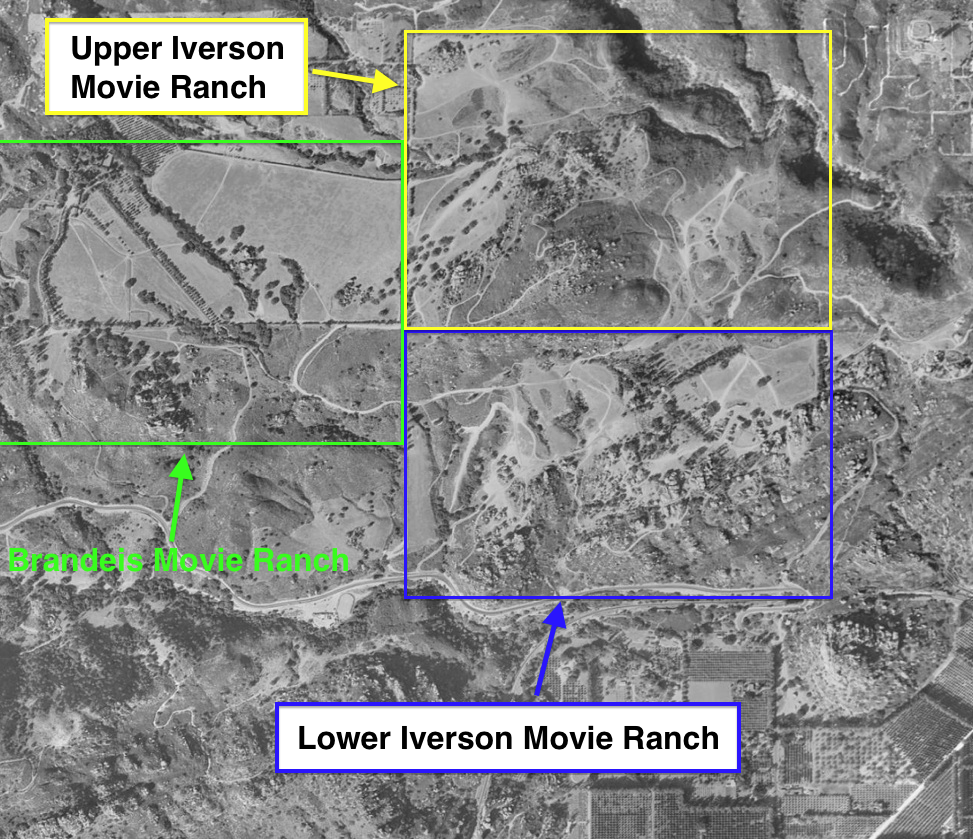 The area shown in the aerial map includes all of the Iverson Movie Ranch, along with most of the neighboring Brandeis Ranch — which was also a filming location, although not nearly as widely used as Iverson. In the aerial photo, much of Brandeis consists of the distinctive flat area in the top left corner, with its eastern boundary identified by a line of trees (a dark vertical line on the aerial map at the top). This line of trees borders the Upper Iverson, and is a common feature in the backgrounds of movies and TV shows shot at Iverson. 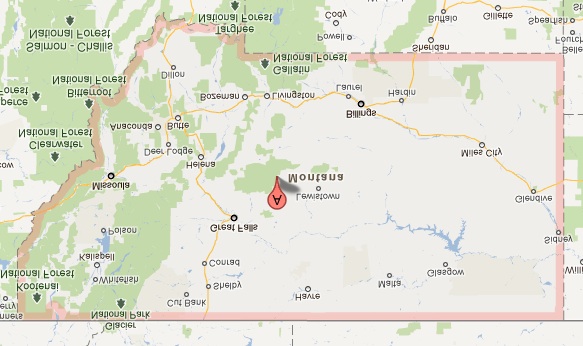 To my eye the shape of Brandeis Ranch resembles the state of Montana, upside-down. Maybe you can see what I mean in the above upside-down map of Montana.

The aerial at the top of this post also shows some of the San Fernando Valley farmland that still existed in Chatsworth as of 1952, in the bottom right corner. This farmland can sometimes be spotted in productions, especially in the background of shots of the Iverson Gorge.

In the aerial above, you may also notice Santa Susana Pass Road, the winding, roughly horizontal (east-west) road about one-third of the way up from the bottom of the shot, which formed the southern boundary of Iverson. A switchback marks the eastern end of Santa Susana Pass, and to the immediate southeast of that switchback is Stoney Point. 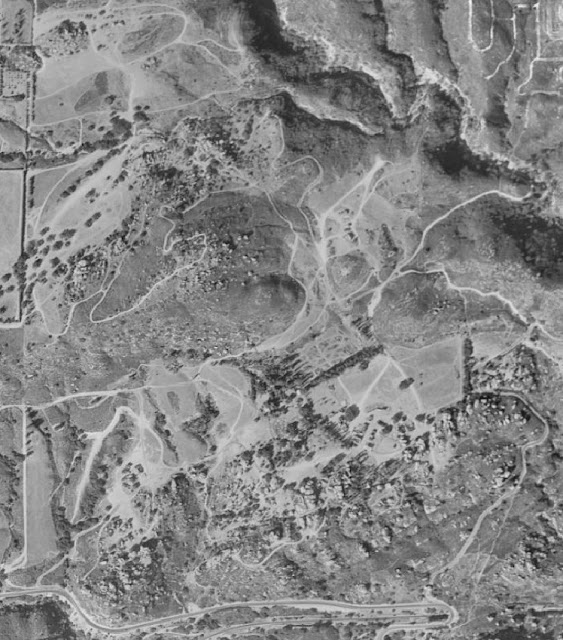 Here's a zoomed-in version of the aerial map at the top of the post. This is essentially the Iverson Movie Ranch, as of 1952 — still pretty much at the height of its use as a movie location. It's only by luck that we happen to have a 1952 map — I'm not sure why it happened then, but I assume it was part of a government project, perhaps associated with the U.S. Geological Survey, and if I know anything about the geopolitical situation at that time (which I don't), it was probably related to the Cold War and national security. But whatever the reasons, we have been handed down a timely and useful aerial view of the Iverson Movie Ranch in 1952. (I would love to have something similar from circa 1937 or 1944 ... but that's just my little fantasy.)

As it turns out, 1952 is a pretty good point in time to get a snapshot of Iverson. By 1952 much of Hollywood's focus was already shifting from movies — particularly the B-movies that had been Iverson's bread-and-butter up to that point — to the fledgling TV business. The early TV series, especially the Westerns — starting with "The Lone Ranger" in 1949 — ensured that Iverson remained an important extension of Hollywood and a busy hub of the entertainment industry for at least the next decade. 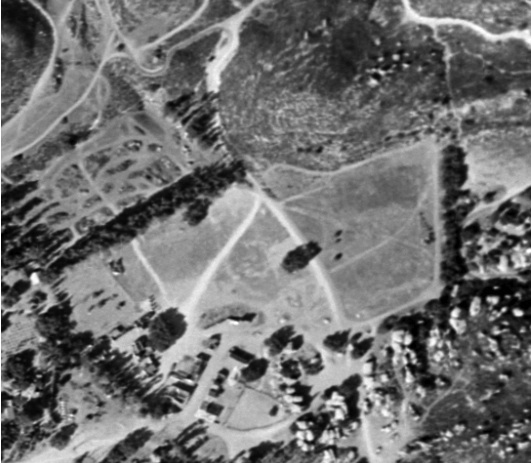 This is just one of the highlights of the 1952 aerial shot. As of 1952, Iverson's Western street — often called Iverson Village or El Paso Street — was in place and in wide use, after having been built in 1945 for Gary Cooper's "Along Came Jones." Above is an even more zoomed-in (and darker) version of the 1952 aerial focused on the Sheep Flats area where the town was built. The aerial doesn't blow up much better than this, but you should be able to make out the Western street near the bottom of the shot, about one-third of the way in from the left edge of the photo. 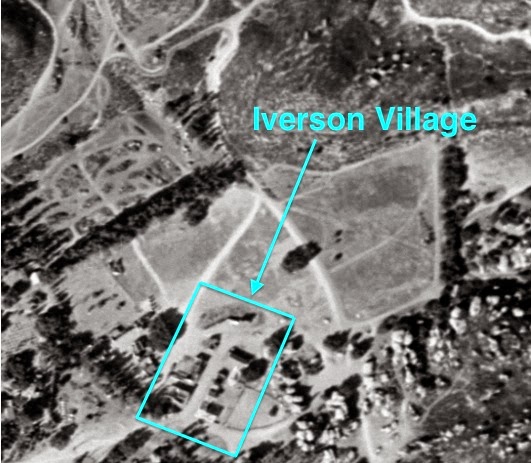 Here's a highlighted version of the same aerial shot to make it easier to find the Western town. The flat area that makes up much of the middle of the shot is Sheep Flats, also called Indian Hills — and this whole flat area, including where the town once stood, is now the site of the Indian Hills Mobile Home Village. Almost at the center of the photo above is a large tree all by itself. Under this tree could be found (and can still be found) Center Rock, an especially charismatic and important Iverson movie rock that has been featured in other posts.