Look who dropped in on the Iverson Ranch: It's a bird, it's a plane, it's ... George Reeves in the 1950s TV series "Adventures of Superman" 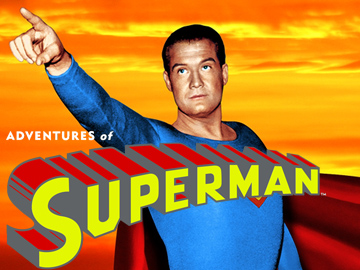 The iconic 1950s TV series "Adventures of Superman" is widely thought to be shot in part at the Iverson Movie Ranch, but until recently a confirmed sighting had eluded me. Then Superman aficionado Dave Spiceland tipped me off that the episode "Panic in the Sky," which first aired Dec. 5, 1953, as part of the show's second season, contains some stuff that looks a lot like Iverson. Sure enough, it turns out the episode has a couple of scenes shot on the old Upper Iverson. 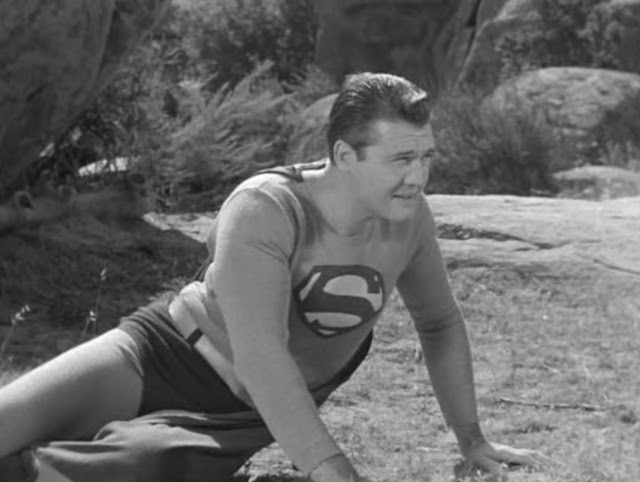 I understand the episode is a fan favorite, with an unusual storyline that has the entire planet in peril and sends Superman into space — twice. When an asteroid threatens to destroy Earth, Superman flies up there to face it head-on and initially manages to divert the thing and send it into orbit. But the effort leaves him in bad shape, suffering from a concussion and amnesia. (What's worse, he later has to go back up and tussle with the big brute again.) In the above shot, a woozy Superman has just landed back on Earth, too disoriented to know where he is. But we know he's on the South Rim of the old Upper Iverson, as the next few shots will reveal. 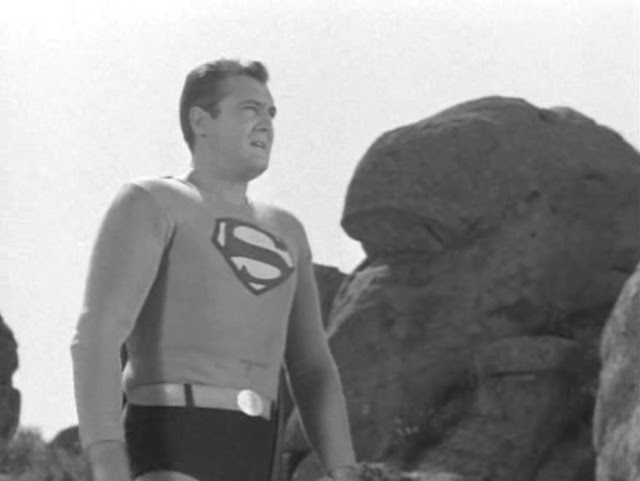 Once Superman stands up we see a familiar rock behind him. I call this one Notch Rock — part of a distinctive set of rock towers that have been called Easter Island or the Totem Rocks. 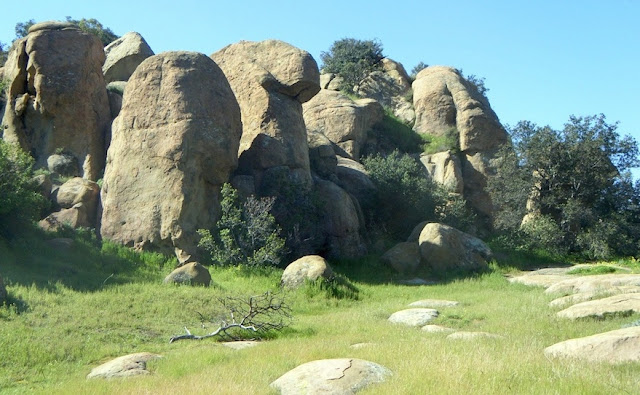 Here's a shot of the Totem Rocks/Easter Island in modern times, with Notch Rock hard to miss near the center of the shot. 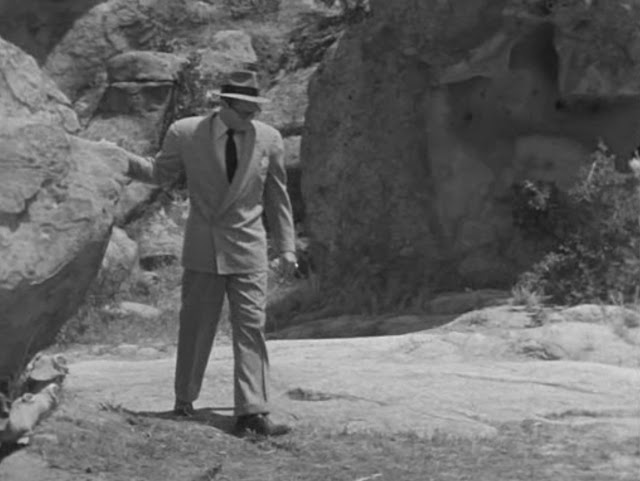 Superman manages to get changed into his Clark Kent outfit — where he stashed the gear while he was off wrangling the asteroid seems like a plot hole, but no need to nitpick. That's the legendary Wrench Rock filling up much of the right half of the shot. (Update: It's not a plot hole after all. Thanks to "Superman" fan Steve Brant, who explained how it works. See comments.) 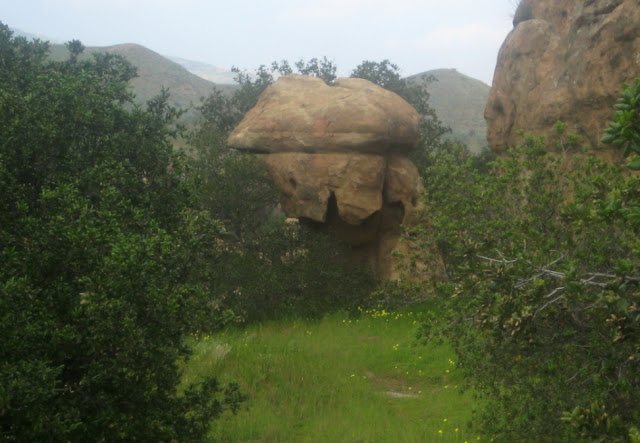 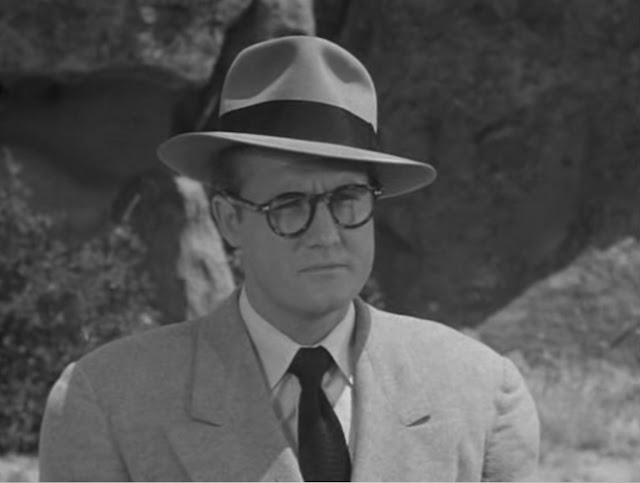 Another glimpse of Wrench Rock, on the left, with an askew George Reeves as Clark Kent. 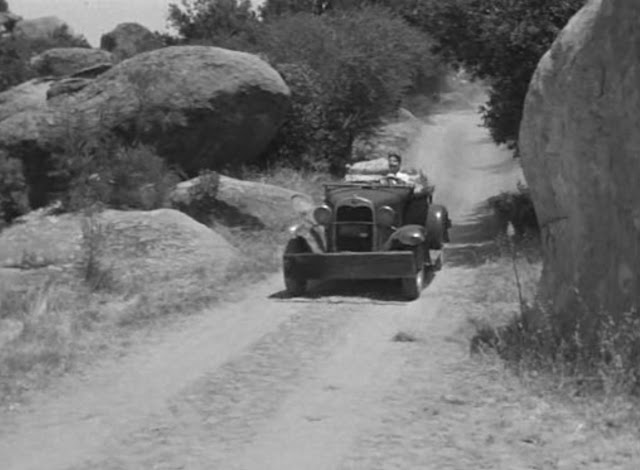 A woman in an old jalopy turns up just in time to rescue Clark and give him a lift to town. That's part of a rock feature I call the Tomb on the left and a portion of the Slates on the right. 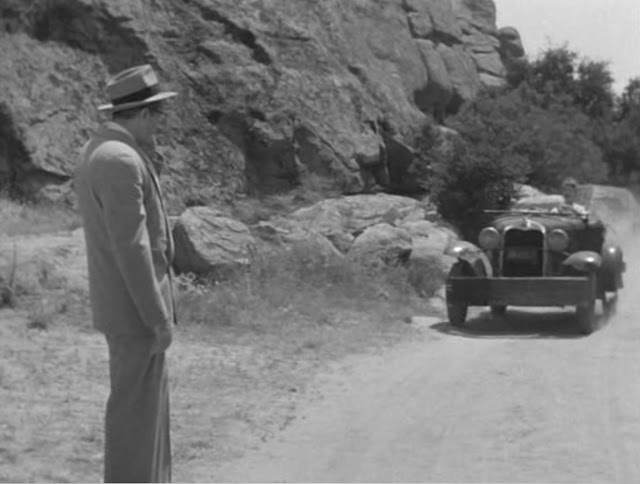 In the background is the Cliff, also known as the T-Cliff. The whole Iverson sequence is shot in one small area. 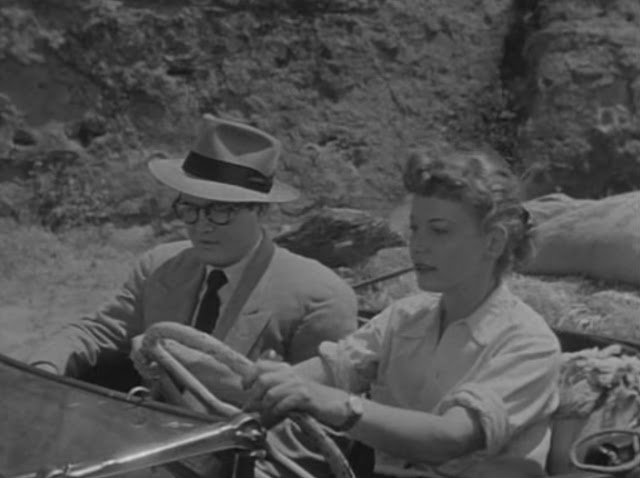 Off they go. I believe the actress is Jane Frazee. 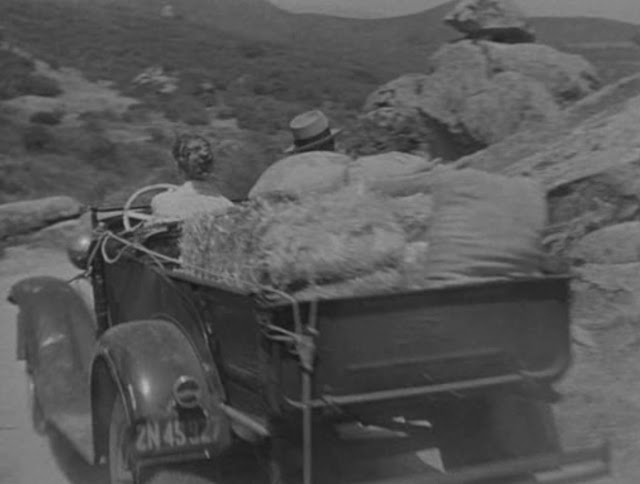 The final Iverson shot in the sequence includes Gold Raiders Rock, top right. The small rock was cemented onto the top of the larger rock around 1950, and it remains in place today. 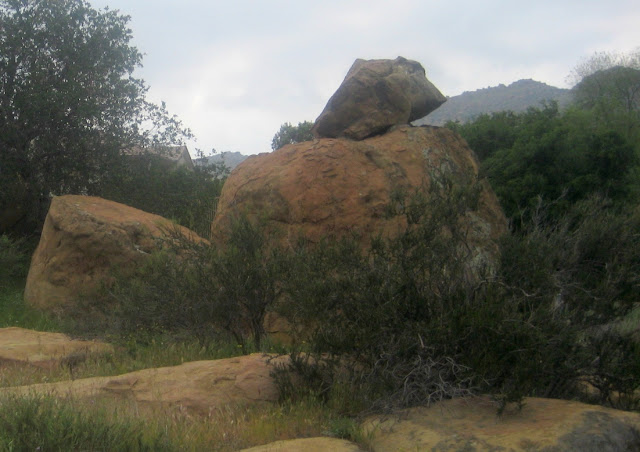 Gold Raiders Rock today, from the other side.

I have yet to become an expert on "The Adventures of Superman," but I've heard season two is the best for Iverson content. Above are some Amazon links (updated in late 2018), where you can find a complete DVD set of all six seasons of the show (the first link) along with various Amazon rental and digital purchase options. 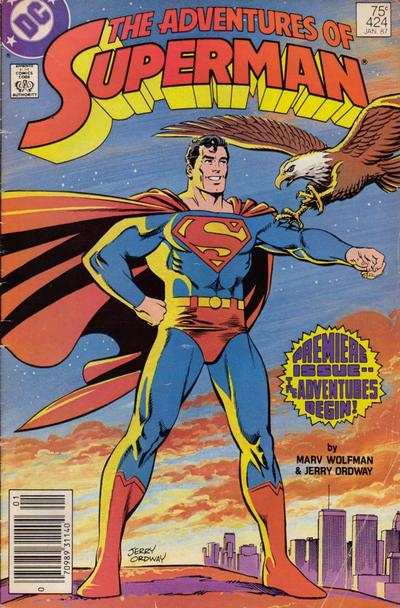 Well done. I haven't watch any of the 1950s Adventures of Superman TV Series for at least 50 years. It's nice to know they also used the Iverson Ranch for some of the show's outdoor scenes. Keep up the good research work.

Thanks for this terrific article I am a huge Adventures of Superman fan, and the use of the Iverson Ranch is now being spread throughout the show's fan base.

But to your point about Superman changing into Clark Kent, fans of the comic book may recall that it was explained many years ago that Superman always "super-compressed" his Clark Kent suit and put it into a special pocket in his cape. That way, he would always have it if he needed it after landing some place.

There is some discussion of the pocket in his cape here...

Thanks again for the great article!

Excellent post. I would imagine that the scene near the close, with Superman actually ON the asteroid setting the explosive, is also Iverson, given the birds heard chirping on the soundtrack(!) plus the obvious fact that they were already there.

Thanks for your comment, Steve, and thanks for straightening me out on Superman's super-compression trick. It works for me -- and I'm glad they addressed it.

The amount I know about Superman is tiny enough that it could probably fit in that pocket even without super-compression!

Thanks, Michael. You're absolutely right -- I just went back and checked that scene. It's shot right near where the earlier Iverson shots were taken. You can find that exact spot today. There's a scene where Superman is crouching over the device, just before he sets it off, and you can see distinctive markings in the rocks behind him. It's a little tricky to get there today, but if you know where to go you can find those same rocks. They're part of the Cliff, which is also seen above (in the second shot with the car).

I used to work up at a gated community that is on the old Iverson property back in the 1990s. (I even saw a mountain lion there one time.) To get to it is go to the San Fernando Valley and take the Topanga Canyon exit off the 118 (Ronald Reagan) Freeway and go north.