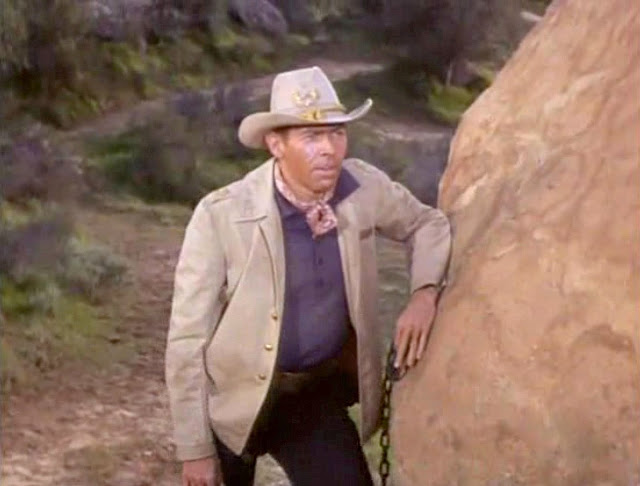 Even as the Iverson Movie Ranch was beginning to wind down operations in the 1960s, one major TV show that continued to bring its location business to the ranch was "Bonanza." 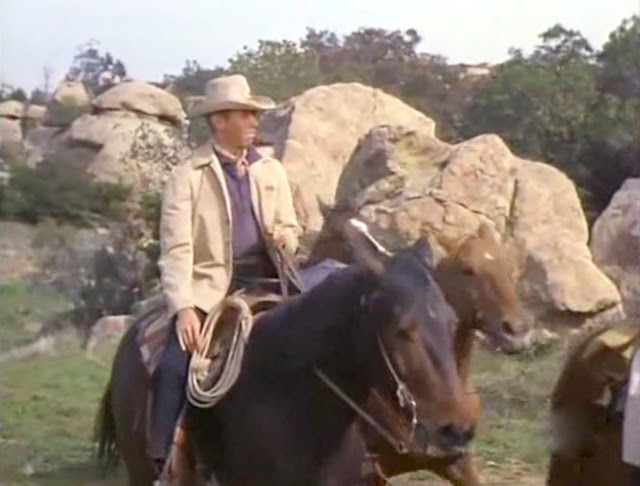 James Coburn on the Lower Iverson in "Bonanza"

In March 1962, when James Coburn arrived at Iverson to shoot the season three episode "The Long Night," "Bonanza" was still filming regularly on both the Lower Iverson and the Upper Iverson. 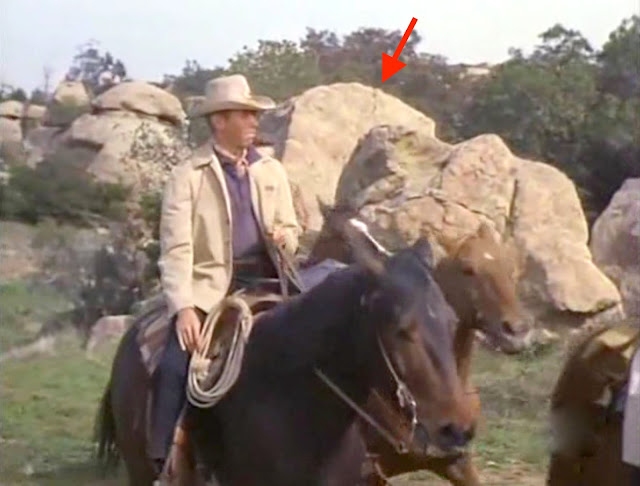 One of the rocks Coburn rides past during this sequence — noted here with a red arrow — is pretty interesting. This rock wasn't seen all that often in productions, even though it was located in a relatively prominent spot. 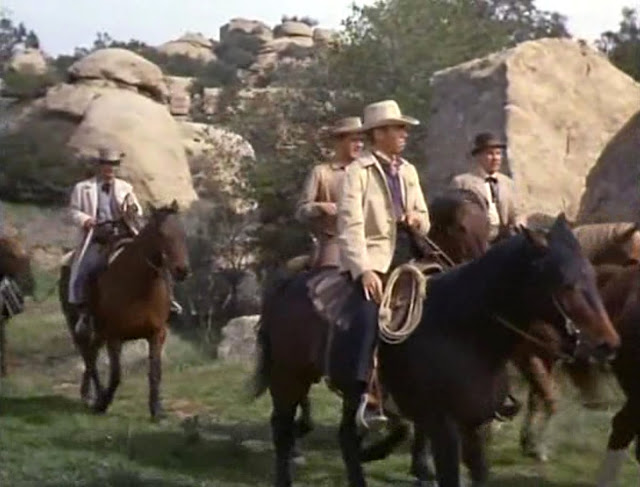 The rock was big enough to tower over a horse and rider, and had an unusual shape to it. I've taken to calling it "Headstone Rock" because ... well, for obvious reasons, I suppose. 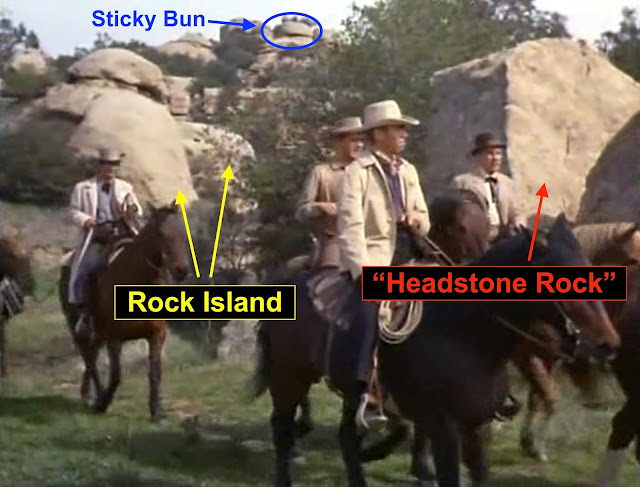 These shots are taken in the "Batman Corner" area of the Lower Iverson, some of which remains intact today alongside Redmesa Road. However, Headstone Rock fell prey to the developers' bulldozers in the 1980s. 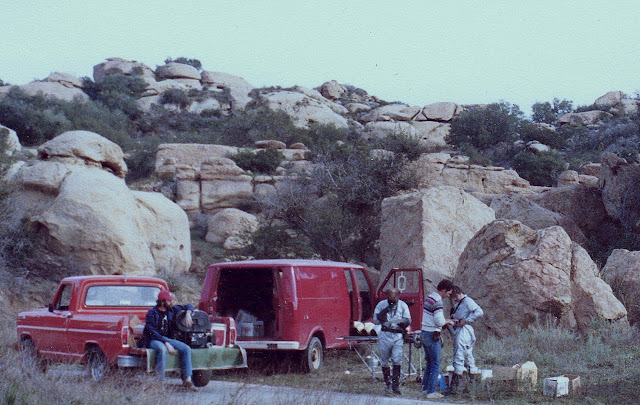 A behind-the-scenes shot that surfaced from filming on the Iverson Ranch for the Roger Corman movie "Deathsport" in 1978 again shows the scale of Headstone Rock, which towers over the people and vehicles. 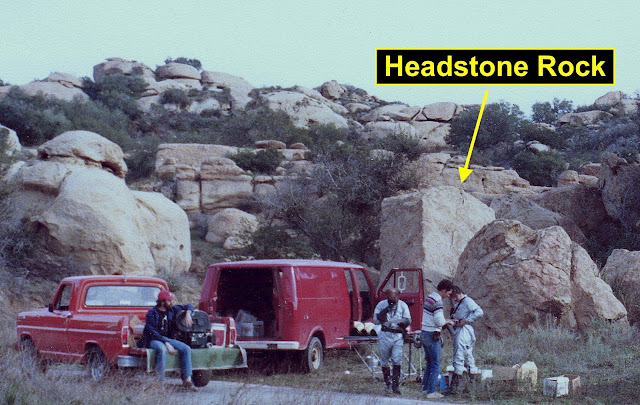 The rock is so perfectly shaped that I have considered whether it might be fake. However, it has been glimpsed on a few occasions in productions from decades earlier, suggesting it was real. 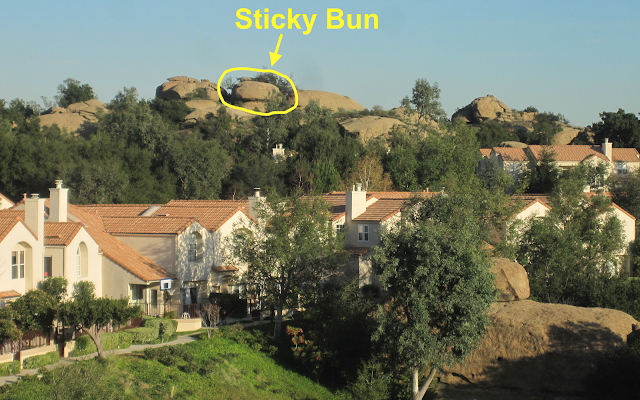 Sticky Bun as it appears today, behind the condos

Sticky Bun is still easy to spot on a visit to the Chatsworth, Calif., site, and can be seen even without getting out of the car as one drives along Redmesa Road, north of Santa Susana Pass Road. 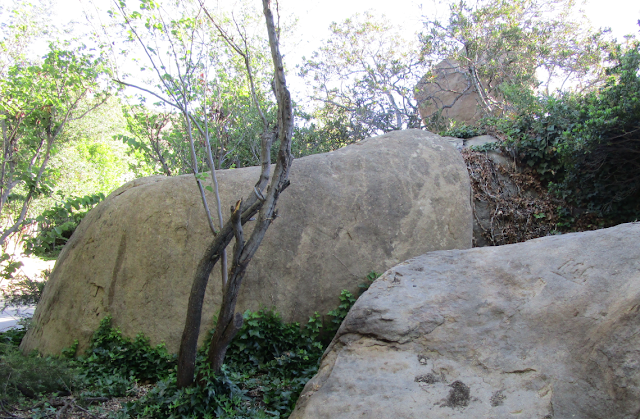 Rock Island is still intact too — in a way. The rocks remain in place but were largely buried during grading for the Cal West Townhomes. I talked about this in detail in a previous post that you can see by clicking here. 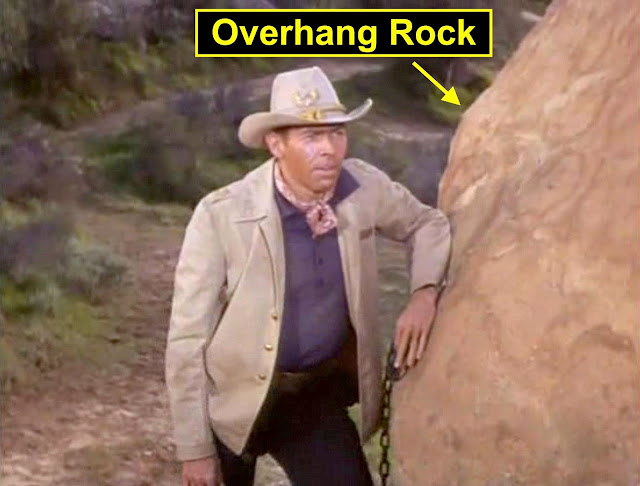 The rock James Coburn is leaning on in this shot is familiar to film historians and Iverson Ranch enthusiasts, who know it as Overhang Rock. Sadly, this rock also did not survive the development of the Cal West Townhomes. 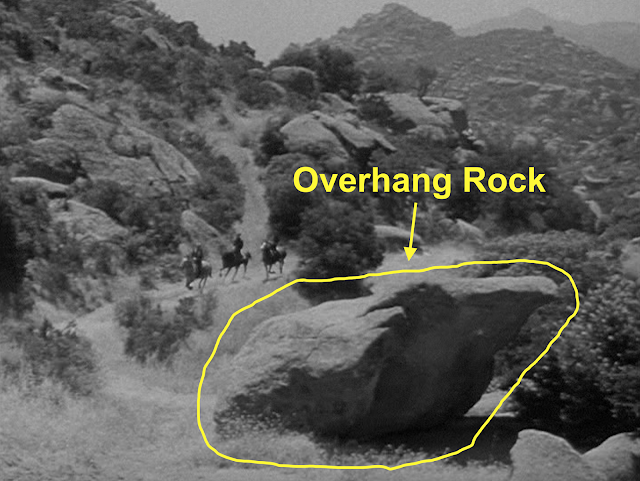 Here's a nice shot of Overhang Rock about a decade earlier, from the Whip Wilson B-Western "Wyoming Roundup." This shot reveals the overhanging ledge that gave the rock its name. 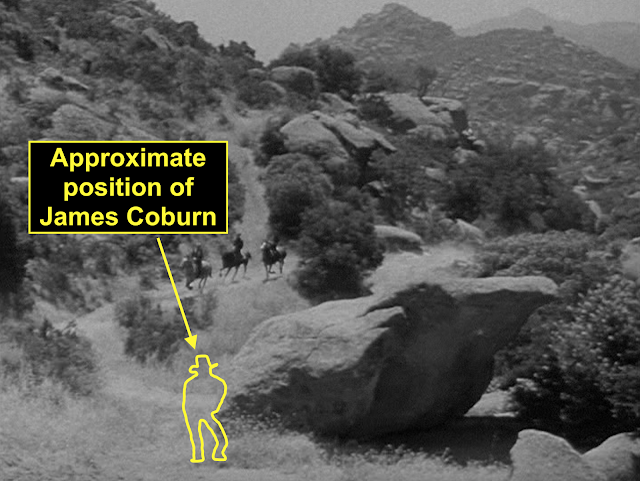 This is where James Coburn stood, more or less, as he leaned against the rock in "Bonanza," although he was a bit more behind the rock than my rough outline suggests. He was facing toward the right of the frame. 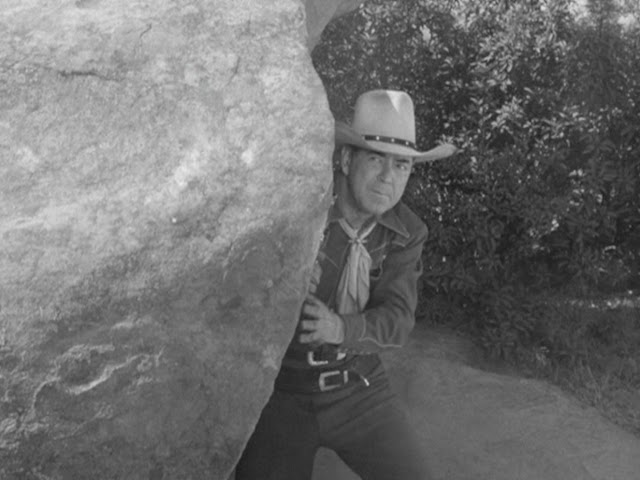 Johnny Mack Brown peeked out from behind the same rock — but the other end of it — in the Monogram B-Western "Colorado Ambush." 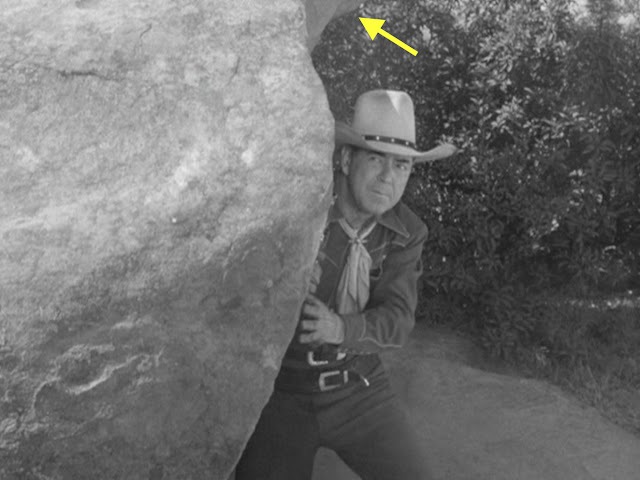 Johnny was lurking under the overhanging part of the rock — you can see a little bit of the overhang here. 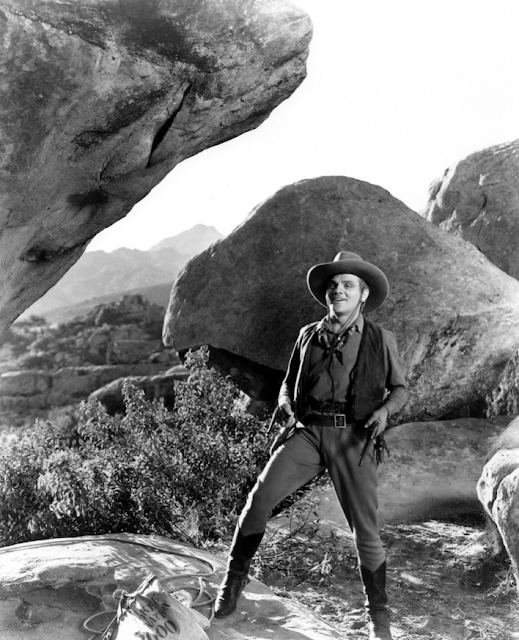 Another famous actor who stood in the shade of Overhang Rock was James Cagney, who posed beneath the rock in a well-known promo still for "The Oklahoma Kid" in 1939. 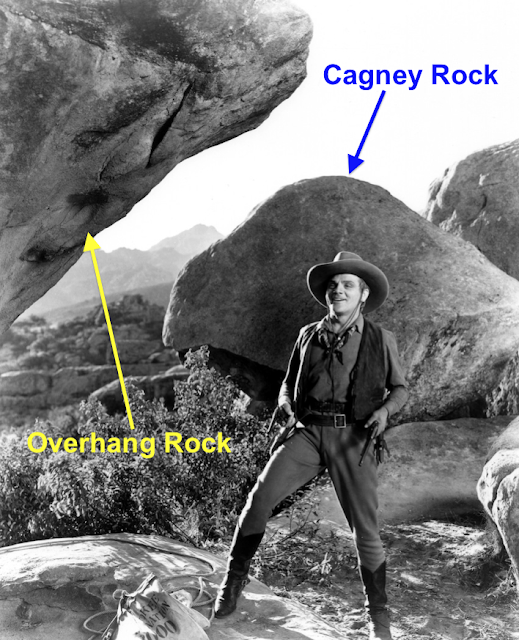 Even though Overhang Rock itself is long gone, the rock seen behind Cagney, "Cagney Rock," remains in place as part of the landscaping for the Cal West Townhomes. You can read more about it by clicking here. 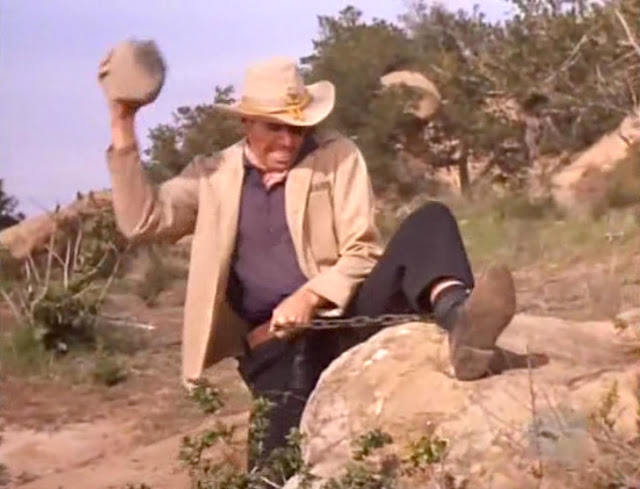 "Bonanza": James Coburn in what is now the condos

So many rocks, so little time. In another shot from the "Bonanza" episode, Coburn, playing an escaped convict, puts his leg up on a rock in an attempt to break his prison chains. I have yet to identify this particular rock. 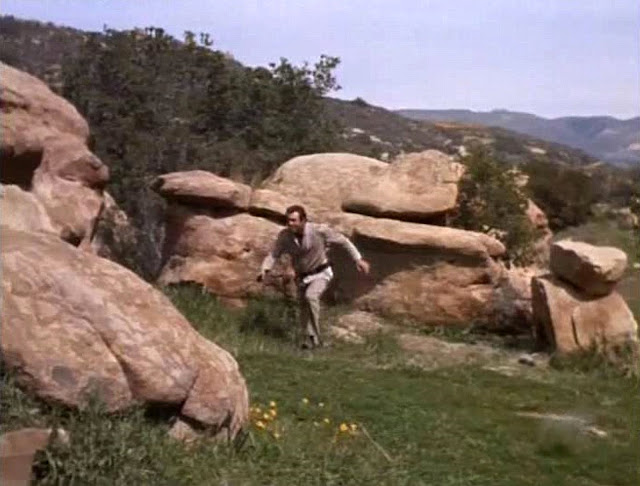 Adam scampers past Cleft Rock in "The Long Night"

The "Bonanza" episode contains tons of great rocks — and as I like to point out, when we're talking about the giant sandstone boulders of the Iverson Ranch, we can use the word "tons" literally. 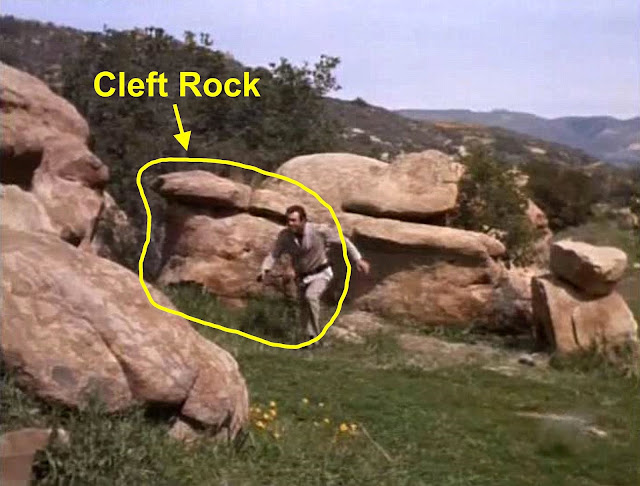 Cleft Rock, seen here, can still be found at the site, a short distance north of the main Garden of the Gods rock towers, on land that has been preserved as a park. Many of the other rocks in this shot have been destroyed. 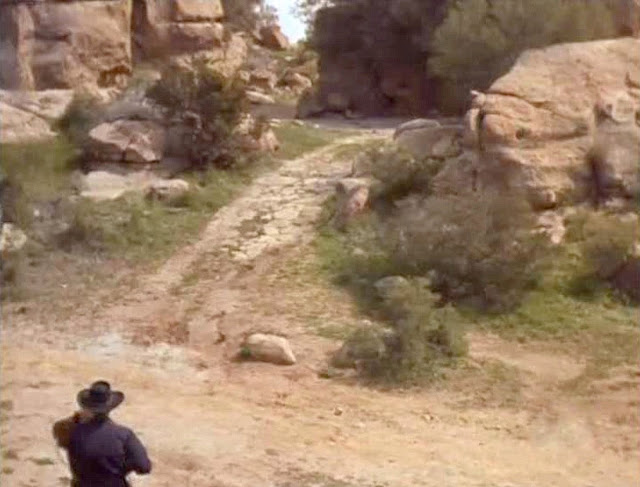 One of my favorite shots in the "Bonanza" episode is this one showing a mysterious road that remains in place at the site, not far from Cleft Rock. I call it the Cobblestone Road, although it doesn't meet the technical definition. 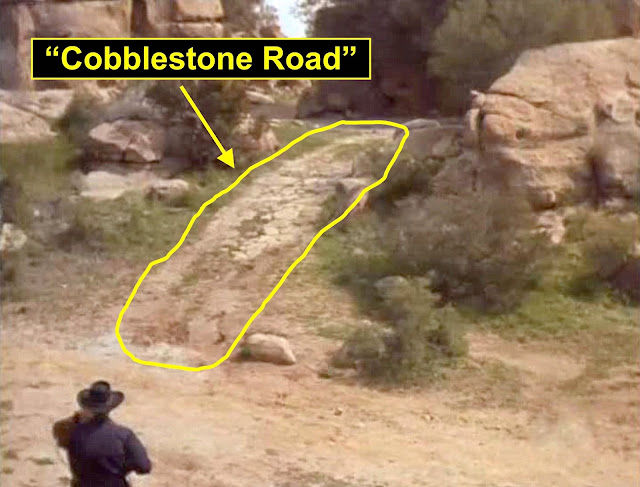 I've been trying to learn the origins of the Cobblestone Road for years, without any luck. The "Bonanza" episode marks the first time I've seen it this clearly in any production, but my hunch is it dates back to the '20s or '30s. 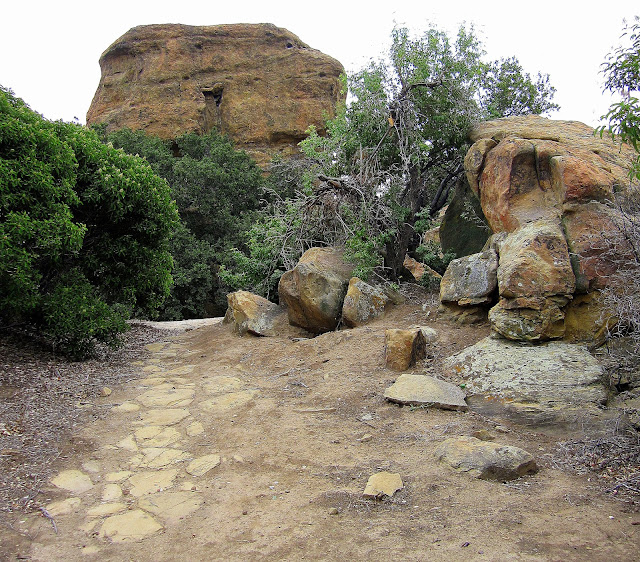 The Cobblestone Road in modern times

This photo from 2009 shows what the Cobblestone Road looks like today. It's not nearly as fully formed as it was during the "Bonanza" shoot more than a half-century ago, but that's it in the lower left corner of the frame. 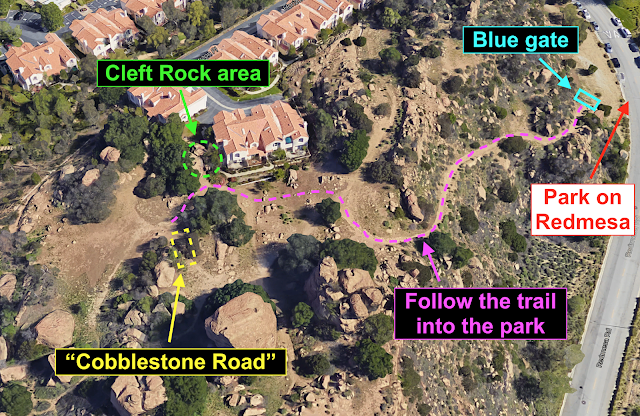 How to find Cleft Rock and the Cobblestone Road

Here's a map to some of the features mentioned above. Start by finding Redmesa Road in Chatsworth. Park below the condos, then follow the map. (You may want to click on the map to see a larger version.)
Posted by Swami Nano at 7:30 PM

I must stop grieving for all the lost rocks! Awesome work again though. Looking forward to more.

Thank you for another fine post. I especially appreciate the aerial views. Every time I see Garden of the Gods I wish that condo building had not been built away from the line of the other condos. It limits the wide angle view for visitors.

I hear you. That one building — two condo units — did more than its share of damage. I think the development could have done without it.