It's a little bit unusual to see the Iverson Movie Ranch on screen in color — especially good color. When I do see Iverson in color it's typically in the low-grade picture quality of early color efforts for TV. But here are some shots from one of only a handful of productions where Iverson appeared on film in glorious Technicolor: the Gary Cooper movie "Dallas 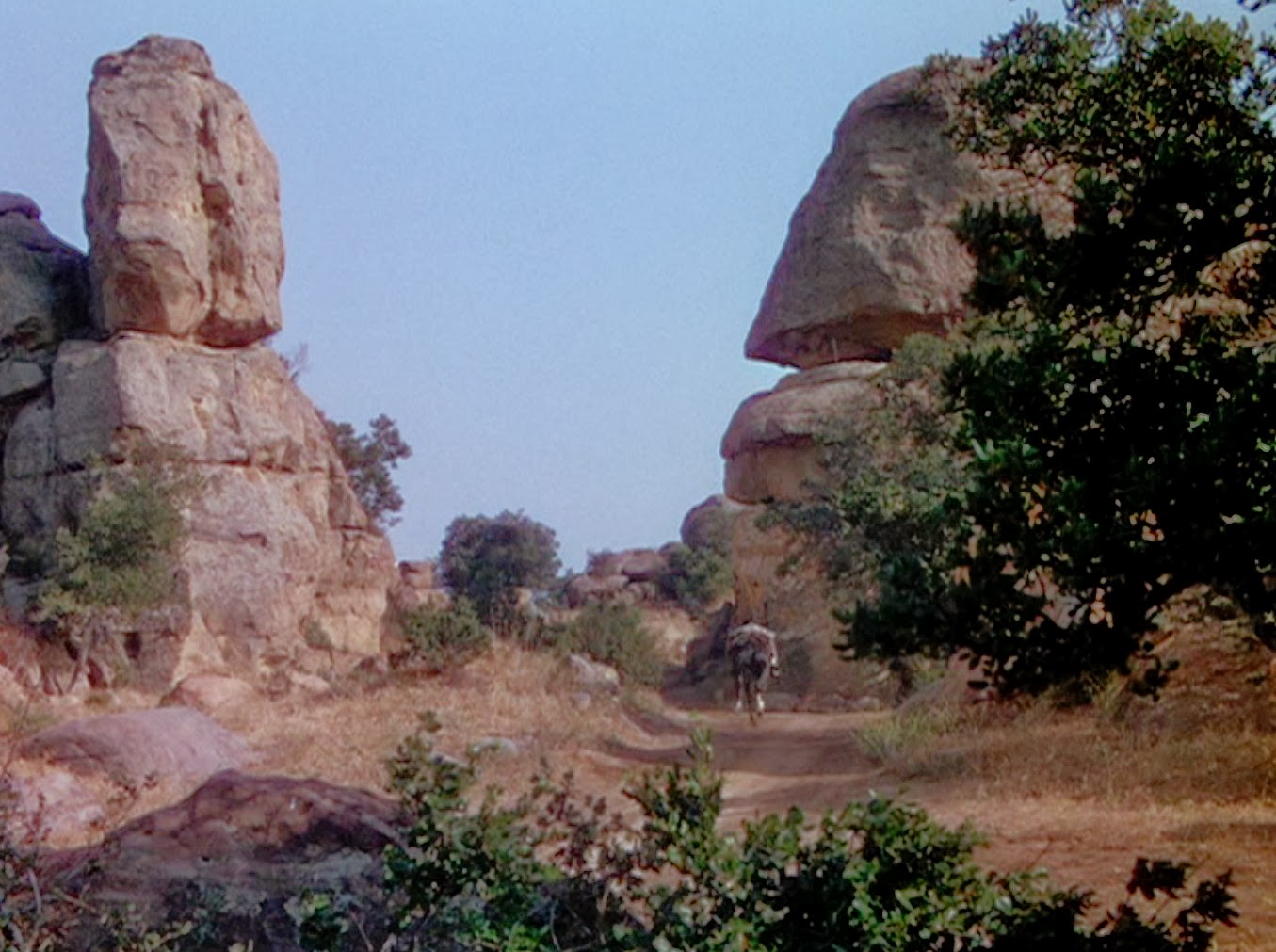 It always starts with Garden of the Gods and the two iconic figures: Eagle Beak, or Sphinx, on the right and Indian Head, or Tower Rock, on the left. 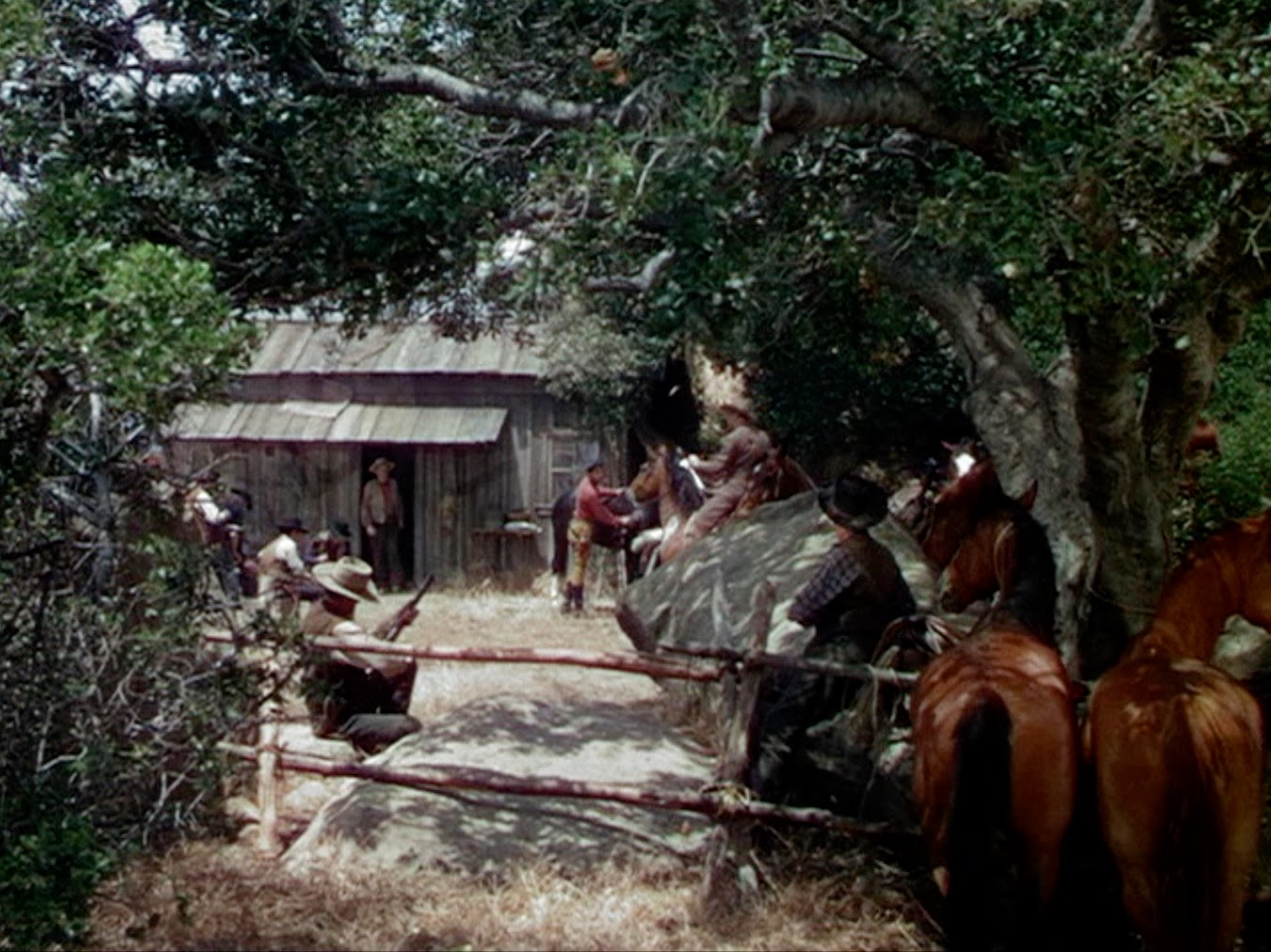 "Dallas" is the only production in which I've seen this cabin, which was built right in the middle of Garden of the Gods, somewhere behind the Sphinx. I initially thought it may have been built on the relatively small patch of flat ground where a camera mount was in place, overlooking Iverson Gorge. (The track for that camera mount is still in place today.) But further research determined that the cabin was more likely a little to the west of that spot, probably tucked in behind the Sphinx and a nearby rock known as Phantom. My guess is the cabin was built specifically for "Dallas" and was probably torn down soon afterward. Gary Cooper already had a track record of construction at Iverson, having been responsible for building Iverson Village for his 1945 movie "Along Came Jones

." In that case the construction paid lasting dividends for Iverson, as the village was used in countless productions for the next 12 years or so. 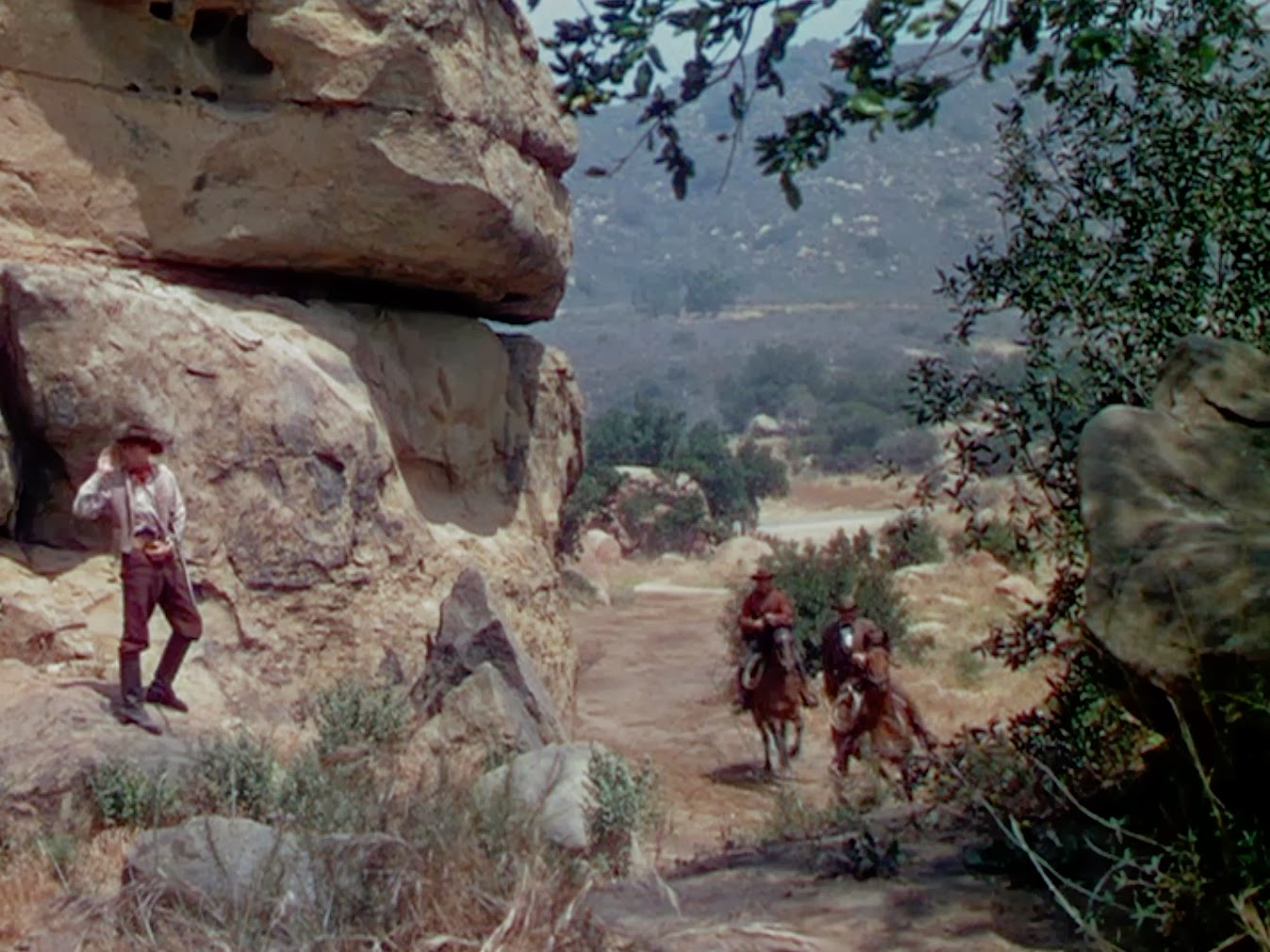 Lookouts were placed strategically on the rocks of Garden of the Gods, which served as an outlaws' hideout in "Dallas." In this shot the lookout is positioned near the base of the Sphinx, or Eagle Beak. 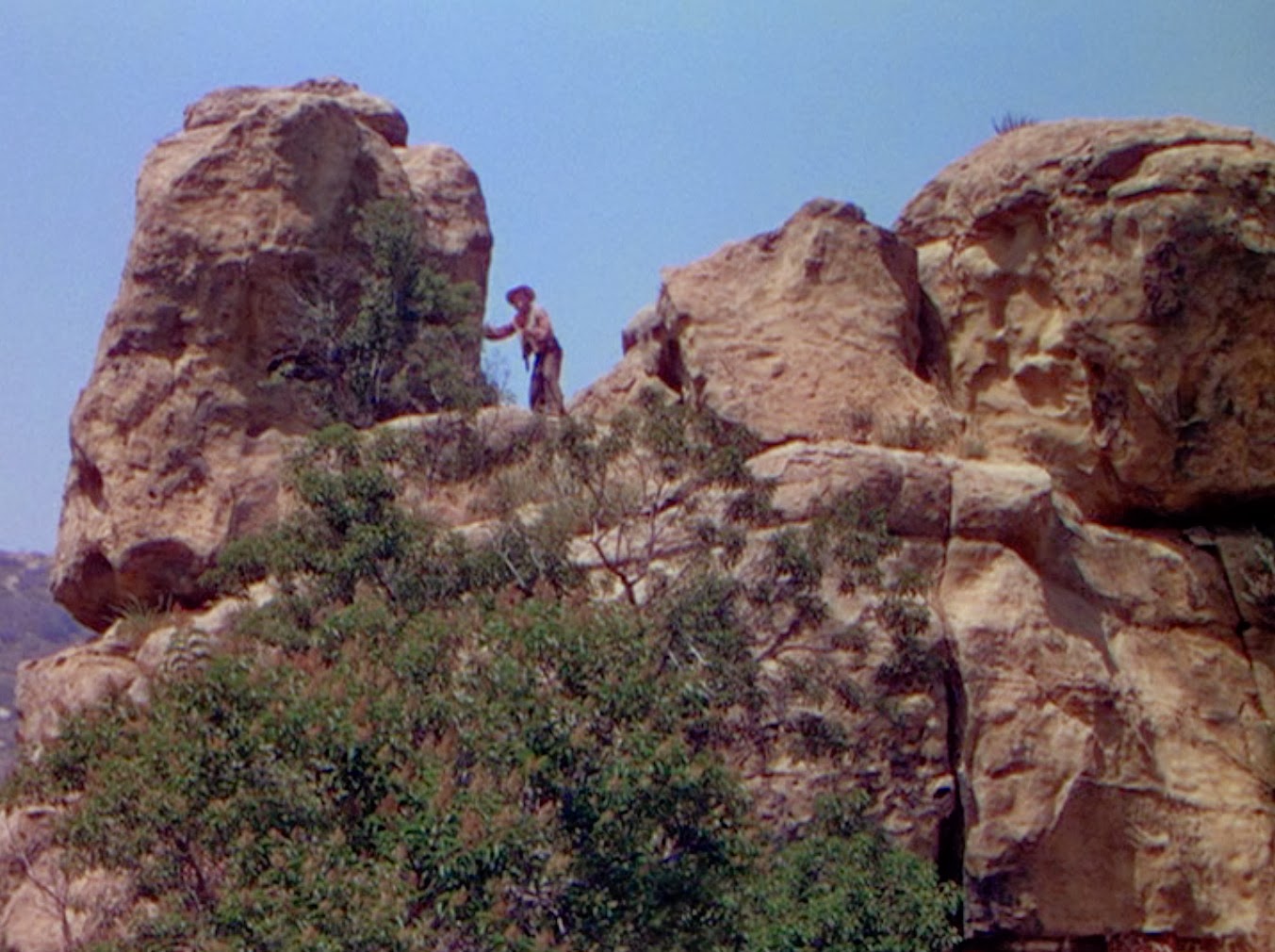 Here's another lookout perched up high, leaning on the rock known as Indian Head or Tower Rock. 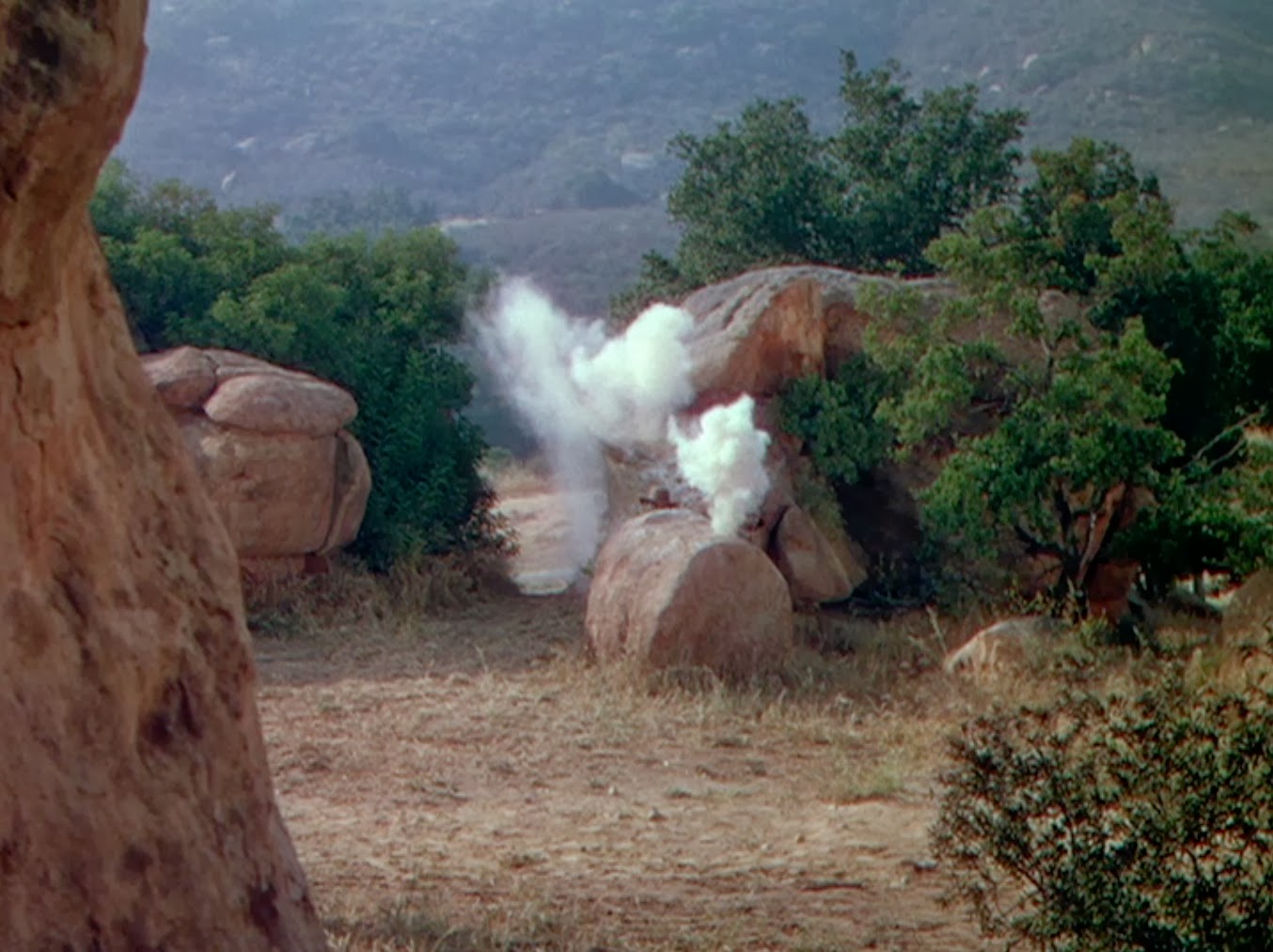 That's Cleft Rock toward the left, just to the left of the clouds of gunsmoke. Cleft Rock is a relatively minor structure, but it has a distinctive shape and appears in a number of films and TV shows. My attempts to find it at Iverson proved fruitless for months, but I finally located it thanks to this movie. It's in the North Cluster area, just above Garden of the Gods, near a group of condos. These days it's covered with ivy and barely distinguishable. 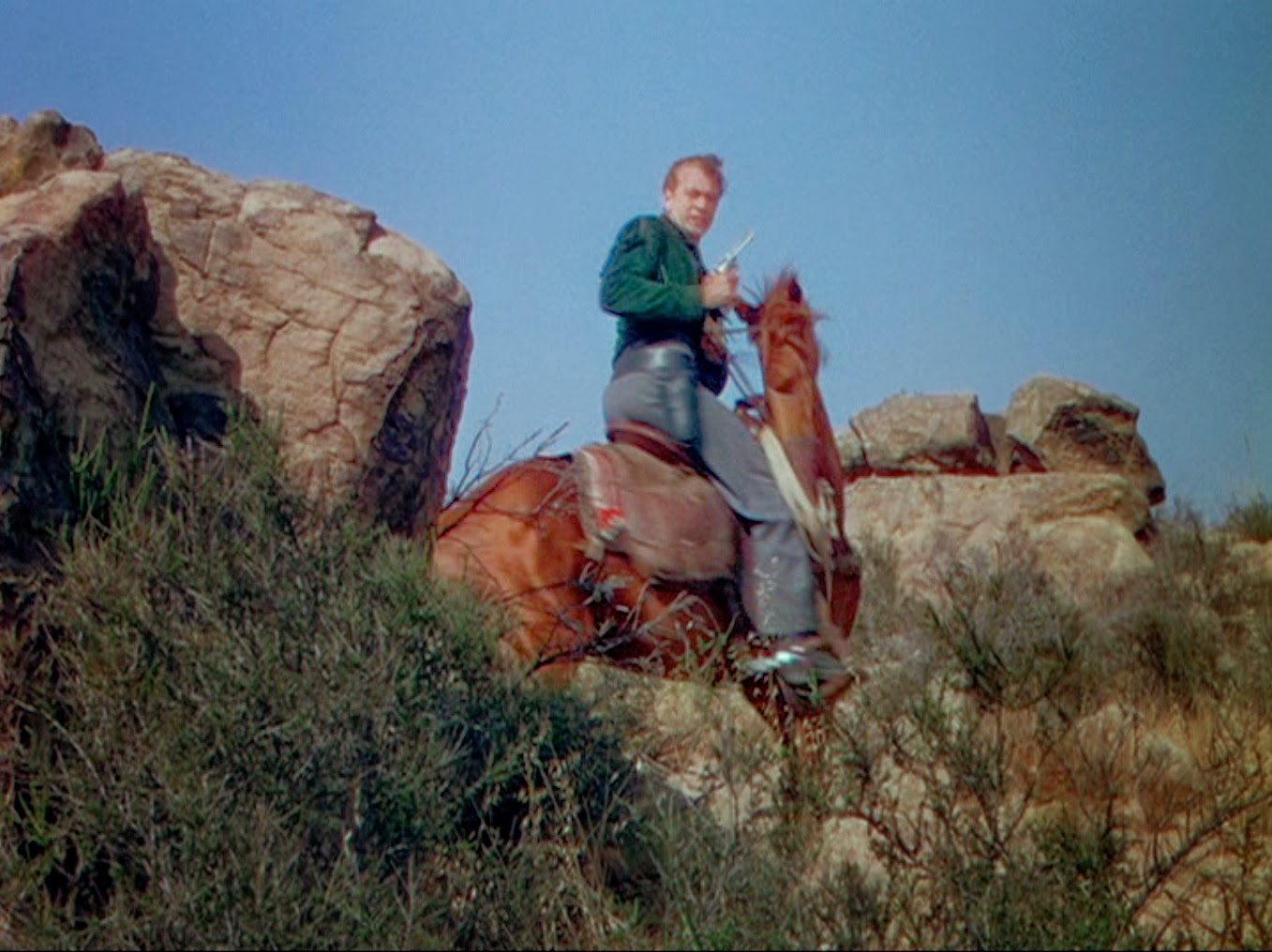 Here's a shot of Gary Cooper in Garden of the Gods for his starring role in "Dallas."
Posted by Swami Nano at 11:58 PM