Fayte Browne had a sadly brief career, working full time as a DP for only four years, from 1949-1952. He filmed at least one bona fide Iverson masterpiece in the Charles Starrett B-Western South of Death Valley (1949), part of a solid body of work rich in Iverson material. Trail of the Rustlers (1950) and Smoky Canyon (1952), both Durango Kid features with Starrett in the lead role, are other examples of his best work at Iverson. 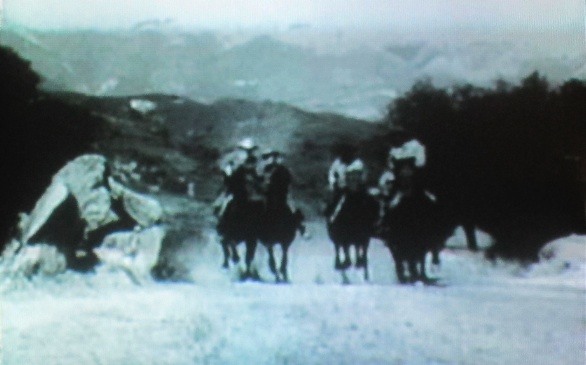 
He spent his entire career with Columbia, initially shooting a variety of projects but eventually specializing in Charles Starrett’s Durango Kid B-Westerns. From the time he shot his first Durango Kid movie — Challenge of the Range, released in 1949, on which Browne served as camera operator under DP Rex Wimpy — he virtually made a career out of the Durango Kid. He shot 24 of the remaining 30 Durango Kid movies that were filmed — his first two as camera operator and the rest as DP. Most, if not all, of these productions filmed at Iverson and featured extensive action sequences among the rocks.

He did a considerable amount of work as camera operator early in his career, some of it uncredited, working in essence as an assistant to more established — although perhaps less inspired — DPs. Browne was still doing camera operator work in 1948 and 1949, even after he had begun his career as a DP — including around the time he shot his Iverson masterpiece. After South of Death Valley he appears to have finally established himself as a DP, and he no longer was relegated to working as an assistant.

I suspect he wallowed in relative obscurity, knowing he had something more to bring to the process than was generally acknowledged. I envision him living a life of frustration and disillusionment, but who knows.

He apparently worked up until the time of his death, shooting a number of movies in 1952 before dying at the age of 56 in July of that year.
Posted by Swami Nano at 11:59 PM